Accessibility links
Keynes' Consuming Ideas On Economic Intervention For British economist Sir John Maynard Keynes, consumption — economic or otherwise — was what made the world go 'round. His ideas about how to nurture national economies, and when to intervene, are still being debated, 65 years after his death.

The last in a three-part series on thinkers who have had a lasting influence on economic policymakers. Other stories featured Ayn Rand and Friedrich Hayek.

On his deathbed the year after World War II ended, John Maynard Keynes is said to have remarked that his only regret in life was that he did not drink more Champagne. For Keynes, consumption — economic or otherwise — was what made the world go 'round.

A long-dead British lord and economic theorist seems an unlikely subject for a rap video, but this one, made last year by George Mason University economist Russ Roberts and filmmaker John Papola, has been a hit on YouTube:

A rap song and video about John Maynard Keynes' ideas has been viewed millions of times.

There's not much that survives of Keynes' own spoken words, but he can be heard in an old British newsreel, in which he delivered a stern admonition.

"We must free ourselves from the bondage of old ideas," he said.

One of the "old ideas" Keynes sought most to debunk was the notion that economies in trouble would naturally fix themselves, thanks to the magic of the marketplace. Princeton economist Alan Blinder says Keynes put his finger on a key economic problem — namely, that insufficient demand leads to growing unemployment.

Keynes was, after all, an economist of crises. The economic stimulus he prescribed for an ailing economy, he made clear, was merely a short-term remedy. In the long term, he wrote, we're all dead.

In Keynes' seminal 1936 book, The General Theory of Employment, Interest and Money, he argued that markets do indeed fail, and that if individuals or private enterprise cannot or will not spend in the short term, then the government must, to boost employment. 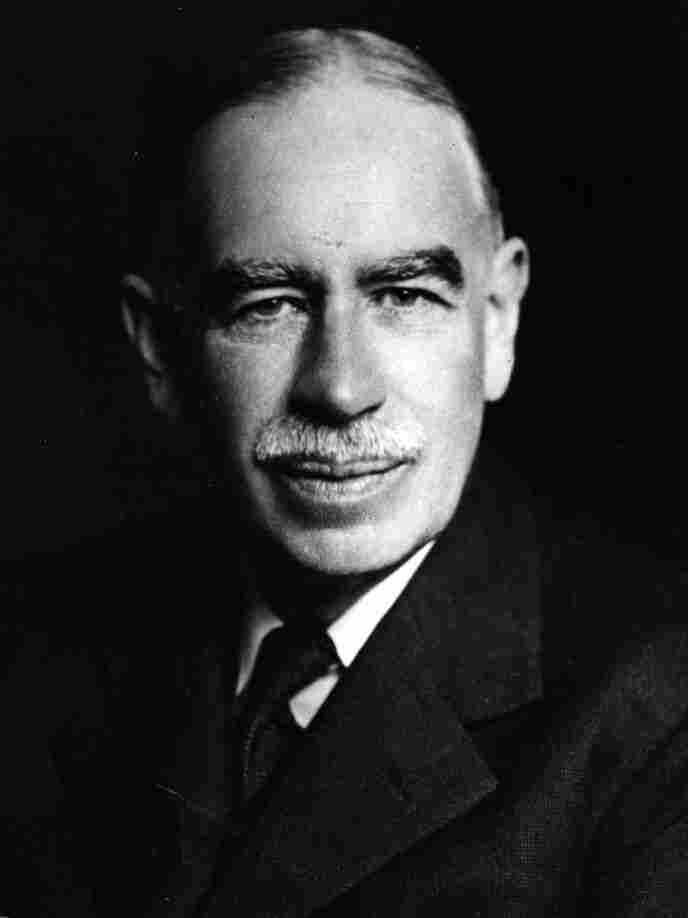 The ideas of John Maynard Keynes, seen here around 1940, had great influence over the economic policies that followed the Great Depression and World War II. Walter Stoneman/Getty Images hide caption 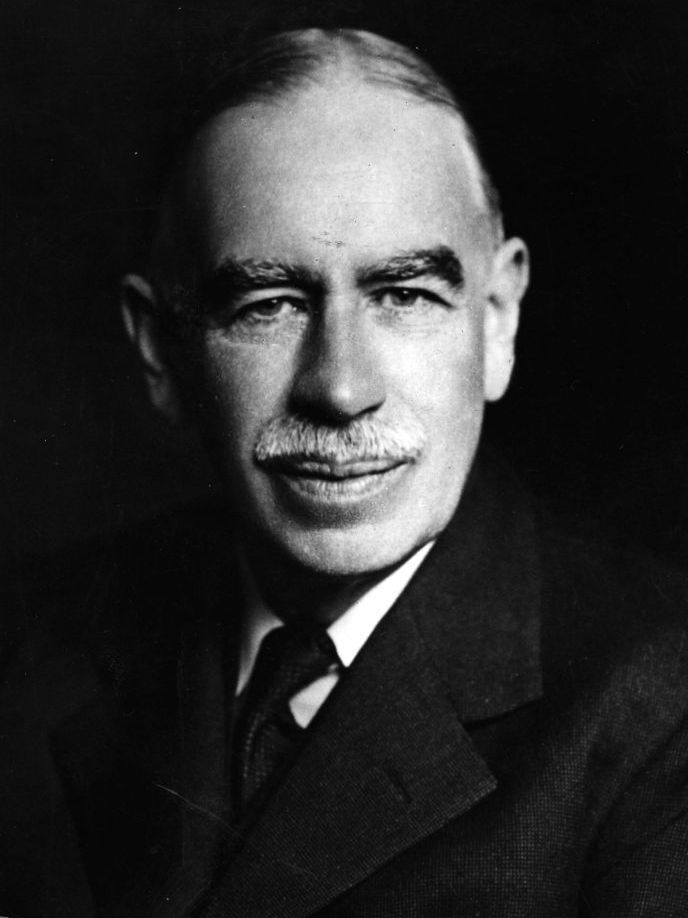 The ideas of John Maynard Keynes, seen here around 1940, had great influence over the economic policies that followed the Great Depression and World War II.

1919: He writes The Economic Consequences of Peace, in which Keynes decries the severe economic punishments doled out to Germany after World War I.

1924: Delivers a lecture titled The End of Laissez-Faire, in which he argues for the creation of "semi-autonomous bodies within the State" that will act in the public's interest.

1929-1931: In the wake of widespread economic collapse, Keynes urges economic policymakers to cut interest rates and make other changes, some of which he has advocated for years, like abandoning the gold standard.

1934: On his second trip to the United States, Keynes meets President Franklin Delano Roosevelt, who is in the midst of enacting his New Deal policies.

1936: Publishes The General Theory of Employment, Interest and Money, in which he analyzes the relationship between spending and employment.

1946: Keynes dies, after suffering at least three heart attacks in the last two years of his life.

"The first priority, in Keynes' view, is to get the economy moving in the short run," Blinder says, "so that we have a bigger economy later."

That's because what Keynes really hated was to see money that could be lent not being lent — or people who wanted to work not finding jobs.

"Keynes' top objective was to re-employ resources that were not being utilized," says economist Jared Bernstein, a self-avowed Keynesian who until earlier this year was Vice President Joe Biden's top economic adviser.

For Bernstein, Keynesian economics amounts to the government doing all it can to foster job creation.

Keynes developed his theories in the midst of the worldwide Depression of the 1930s. They had a broad impact. At his 1933 inauguration, President Franklin Delano Roosevelt declared that the primary task facing the United States was to put people to work.

"It can be accomplished in part by direct recruiting by the government itself, treating the task as we would treat the emergency of a war," Roosevelt said, "but at the same time, through this employment, accomplishing greatly needed projects to stimulate and reorganize the use of our great natural resources."

And for many decades after the Great Depression, American leaders — both Democratic and Republican — followed the Keynesian prescription of government intervention to boost sagging economies. As recently as 2009, a newly inaugurated President Obama went before Congress to make the case for more government spending to curb growing unemployment.

"I reject the view that says our problems will simply take care of themselves, that says government has no role in laying the foundation for our common prosperity, for history tells a different story," Obama said.

The president did get a somewhat smaller economic stimulus package than the one he requested from a Congress led by Democrats. But after Republicans took control of the House this year, the emphasis on Capitol Hill has switched to controlling deficit spending. Still, economist Bernstein says the Obama administration remains true to Keynesian thinking.

"Just look at the American Jobs Act," he says. "That's a $447 billion stimulus program, and they may not want to label it that, because of political reasons, but certainly the measures in there would be very recognizable to Keynes as precisely the right way to help temporarily offset the contraction in private-sector demand."

"Some in Washington, including the president, are suggesting that we simply spend more money," Burr said. "We've already tried that. It did not spur job growth then, and it won't now."

The Texas governor did a little Keynes-bashing during a swing through Iowa last August.

"Two times now in American history, we've had this country go through an experimentation with, with Keynesian economics," Perry said. "And I will tell you, particularly in this latter attempt, it has been a huge experiment that has failed miserably for the American people."

Perry spoke shortly after Congress enacted a big deficit-reduction plan as part of a deal to raise the debt ceiling. As that budget-cutting legislation reached the Senate floor for a vote, Illinois Democrat Dick Durbin greeted it with a lament.

"We are having the final interment of John Maynard Keynes," he said. "He nominally died in 1946, but it appears now that we're going to put him to his final rest with this agreement."

Later, outside the Senate chamber, I asked Durbin to elaborate.

"What I was referring to was the fact that we decided to cut spending, despite the fact that we're deep in a recession," he said. "Every economist that I respect and talk to says that there are things that government can do to move the economy forward. The president's jobs bill is a good illustration. So this notion of cutting spending in a recession — I think it just makes it worse."

For Keynes, running budget deficits during a slump was a lesser evil than slashing budgets and letting unemployment rise. Princeton's Blinder acknowledges that Keynes' influence may have waned, at least for the moment. But the British thinker's ideas are a long ways from dead, he says.

"If we go back to recession, in the United States and in the world, I'm quite confident you're going to see governments around the world turn to Keynesian policies," Blinder says.

Just as there are no atheists in a foxhole, he adds, hard times have made Keynesians of many a free marketeer. As former President Richard Nixon put it some 30 years ago, "I am now a Keynesian."