Accessibility links
Tim Dickinson: The Tax Policies That Increased Economic Inequality Rolling Stone political correspondent Tim Dickinson says the tax policies pursued by the Republican Party have benefited the top 1 percent of income earners. "The people at the very top of the income [bracket] are taking off like a rocket," he says. 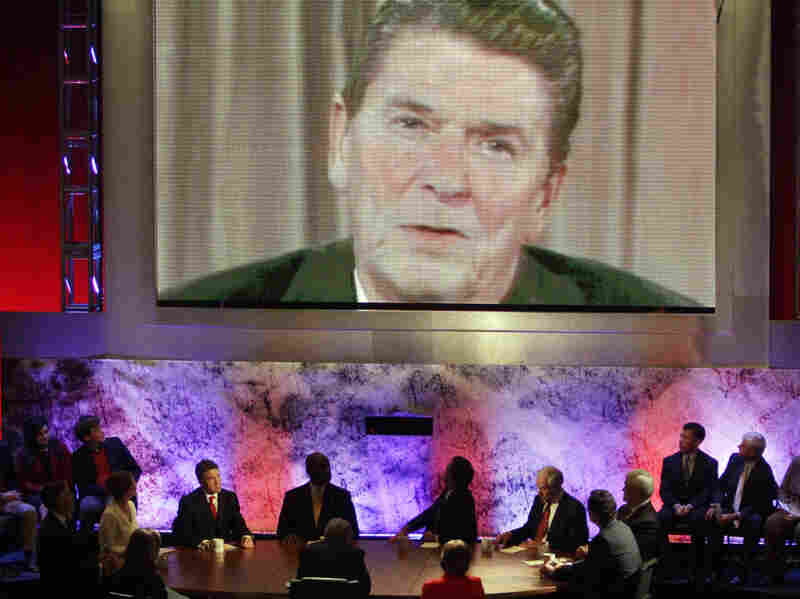 The eight Republican presidential candidates sitting at the table listen as a video of former President Ronald Reagan is played during a debate at Dartmouth College in Hanover, N.H., on Oct. 11. Jim Cole/AP hide caption 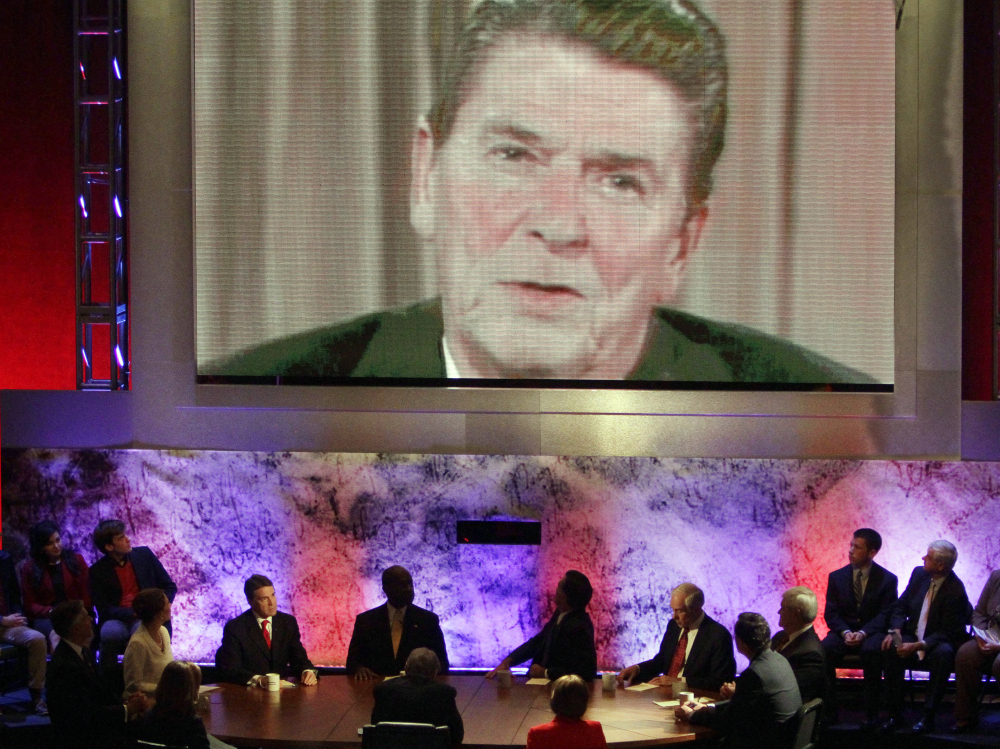 The eight Republican presidential candidates sitting at the table listen as a video of former President Ronald Reagan is played during a debate at Dartmouth College in Hanover, N.H., on Oct. 11.

The Occupy Wall Street movement continues to protest policies that have made the top 1 percent of income earners richer, while about 14 million Americans are out of work.

Meanwhile, the Congressional supercommittee only has one week left to come up with a plan that will cut more than $1 trillion from the deficit. Republicans are opposed to raising revenues by raising taxes, even on the wealthiest Americans, who have seen their taxes dramatically cut over the past 14 years.

"Almost without exception, every proposal put forth by GOP lawmakers and presidential candidates is intended to preserve or expand tax privileges for the wealthiest Americans," writes Rolling Stone political correspondent Tim Dickinson. "Most of their plans, which are presented as commonsense measures that will aid all Americans, would actually result in higher taxes for middle-class taxpayers and the poor."

On Wednesday's Fresh Air, Dickinson explains how the tax policies pursued by the Republican Party have changed in the past 14 years — and says those changes have led to greater economic inequality in our country.

He explains that the top 400 taxpayers in the United States have seen their incomes increase threefold since 1997. In that same period, their tax rate has fallen by 40 percent.

"Today, a billionaire in the top 400 pays an effective tax rate of about 17 percent," he says. "That's about 5 percentage points less than your average worker."

Tim Dickinson, on the 'starve the beast' strategy

The income of the wealthiest Americans has also increased. Dickinson writes that "since Republicans began their tax-cut binge in 1997, they have succeeded in making the rich much richer. While the average income for the bottom 90 percent of taxpayers has remained basically flat over the past 15 years, those in the top 0.01 percent have seen their incomes more than double, to $36 million a year."

Dickinson tells Terry Gross that the revenue going to the wealthiest Americans is increasing.

"This isn't just about the broadest sweep of American society — this 90 percent — if it's getting ahead, it's getting ahead just at the margins," he says. "The people at the very top of the income period are taking off like a rocket — $10,000 an hour raise for the people in the top .01 percent."

Tax cuts, says Dickinson, weren't always the center of Republican policy. From the end of World War II through the Reagan administration, he says, Democrats and Republicans fought over social spending but largely stayed away from taxes.

"Traditionally, Republicans cared deeply about fiscal balance," he says. "So you fought over balance — and taxes were an otherwise uninteresting mechanism to pay the bills. And tax policy wasn't meant to prod and stimulate the economy because prosperity came from the private sector. So the GOP focus on tax policy was not to give the economy a boost, but to find a nondestructive way to raise the revenue that [the government] decided it needed."

The biggest tax cut during that era, says Dickinson, was made by Democratic President John F. Kennedy. Republicans largely opposed it.

"[They] were concerned that this was going to create deficits that were unwieldy," Dickinson explains. "This was consistent with the ideas that Republicans held that their duty in the system was to keep the nation's books in balance."

In the late 1970s, inflation increased wages. Many members of the middle class were pushed into higher tax brackets. President Reagan lowered the tax rate for the wealthiest Americans to just 28 percent in 1986 — but this was largely offset by increasing the amount of money taxed on investments. (This is called a capital gains tax.)

"[In the '80s and early '90s,] people were paying the same amount of tax on income that they got from wages as they got from income that they got from investments," he says. "But starting in 1997, Republicans led by Newt Gingrich dropped that [capital gains rate] to 20 percent. And in 2003, led by Dick Cheney, the Republicans dropped the capital gains rate tax down to 15 percent. And this is why you have this grotesque situation where the richest taxpayers in America are paying a lower effective tax rate than the average wage earner."

What this means is that a person who makes money on investments through the stock market or a hedge fund pays a much lower tax rate on the money earned through those investments than they would pay on a salary.

"The richest 400 taxpayers earn more than two-thirds of their income in capital gains, so that helps explain why their effective tax rate is so low, because the lion's share of their earning is taxed at this ... low rate," says Dickinson.

Where The Current GOP Candidates Stand

"That would have the effect of kicking something like 23,000 millionaires off the tax rolls entirely," says Dickinson. "They're people who are just investors. They just make money from money. And under the tax policies proposed by many of the GOP candidates, they would pay nothing in federal income taxes. ... You end up with a situation that is very dangerous to the fiscal order. The Republican philosophy through Reagan was about preserving the fiscal order — about making sure the federal government had enough money to pay its bills."

Though Reagan cut taxes for the wealthy, says Dickinson, he also raised revenue by closing tax loopholes. He also undid a third of the original tax cuts initially implemented by his administration.

"While Reagan was dedicated to cutting taxes for the rich — that is true — he was also mindful of not leaving the country with unsustainable debt," says Dickinson. "Although he did rake up enormous deficits, he was making adjustments during his two terms to raise taxes on things like gasoline. ... Throughout Reagan and the George H.W. Bush presidency, there was a commitment to balance ... and that required raising revenues. There wasn't this allergy to revenue that the current GOP displays."

"[They thought] if it bankrupts the country, that's OK because it's going to lead to greater spending cuts later on. So if you don't like the nature of what government does — you don't like that it funds a social safety net, you don't like Medicare, you don't like Social Security — it's actually a good strategy to leave the government in a perilous fiscal situation, because energies will be directed into cutting spending and paring back these programs."

"In Grover's hand's, the anti-tax pledge has taken on a life of its own. He has taken this pledge — I believe it's now been signed by 98 percent of Republicans in the House — to the state Legislatures. I think there's something like 1,300 Republican state legislators who have signed the pledge. And you have politicians who are coming up through the farm systems in the states before they reach Washington — a very good example of that is Eric Cantor, who's, as a member of the Virginia House of Delegates, signed this pledge. He, of course, today is the House Majority Leader."

"During the Bush administration, there was an argument ...[from] Dick Cheney that 'deficits don't matter,' that you can run up these tax cuts on essentially the national credit card, that you can pay for these tax cuts to the wealthiest by borrowing money from China if you need to. But today there's this argument with Obama as president that deficits do matter — in fact, they're the most important thing of all. But there's this strange caveat to this. You can still push through new tax cuts for the wealthy even if those are paid for with deficit spending. It's a very puzzling line of argument that doesn't get challenged very often. But you look at the lame duck deal in December of last year that extended the Bush tax cuts for the wealthiest — and this was a deficit finance package that had other components to it — but the net effect was to raise the national debt by a greater amount than the stimulus package that the Republicans fought so bitterly against as wasteful deficit spending."

Tim Dickinson: How the GOP Became the Party of the Rich