Accessibility links
Solyndra Highlights History Of Energy Subsidies Energy Secretary Steven Chu will face scrutiny on Capitol Hill Thursday over loans to the failed solar firm. But the government has a long history of subsidizing many kinds of energy, from coal to oil to wind. Still, different sectors disagree on whether tax deductions should be considered a subsidy.

When Energy Secretary Steven Chu appears on Capitol Hill on Thursday to defend the Obama administration's solar energy subsidy program, he will face questions about the solar panel firm Solyndra, which went belly up this summer. 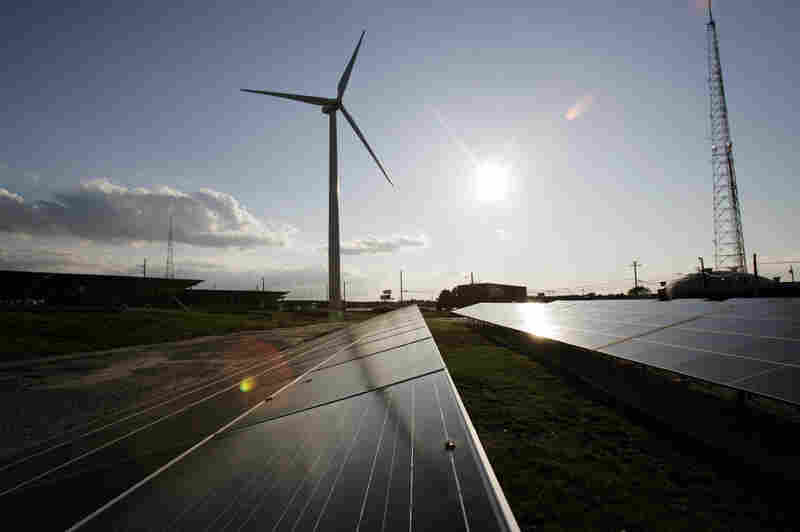 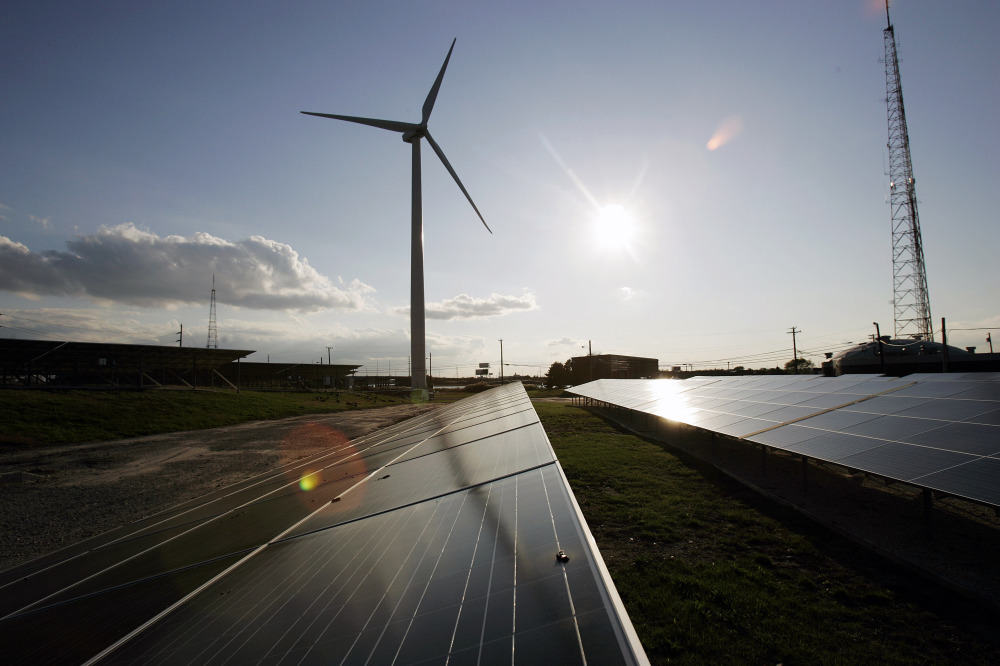 Windmills and solar panels in Atlantic City, N.J., power a wastewater treatment plant, with surplus energy going to the area power grid. Solar and wind energy companies receive $370 million in federal subsidies annually, which is less than 1 percent of what oil and gas industries receive.

The Energy Department has drawn stiff criticism over a government loan guarantee program that lent the company half a billion dollars, but the government has a long history of subsidizing many forms of energy.

Chu says he does not believe Solyndra should alter U.S. support for clean-energy companies.

A History Of Subsidies

In fact, the government has played a role in energy investment through tax deductions, research grants and regulatory policies dating back to the days when timber was a major source of fuel.

Nancy Pfund is a venture capitalist investor in clean technologies, who co-authored a recent study that tallied the tax benefits, loans and grants over the years.

Pfund says by comparison, solar and wind power companies receive $370 million in federal subsidies annually — less than 1 percent of what the oil and gas industries receive.

The federal government has provided an estimated $837 billion for energy development since 1950, according to a recent report. That includes money for tax concessions, for research and development, and the value of regulations (such as exemptions from price controls).

But of course the green energy industry is relatively new and much smaller, and there's little agreement among the different energy sectors as to how much money they receive from the government.

The oil and gas industries, for example, say tax deductions they receive should not be considered subsidies. But Pfund and alternative energy advocates argue the distinction doesn't matter.

"Whether it's a credit or just the size of your tax bill, that really doesn't matter; it's still a subsidy," she says.

Investing In The Next Project

Stephen Comstock, a manager of tax policy at the American Petroleum Institute, says such deductions are available to other manufacturing or mining industries, so it's not special treatment.

"When folks talk about subsidy or government spending, really all we're talking about is the ability of business to recover their costs," Comstock says.

For the oil and gas industries, these tax benefits add up to more than $50 billion annually. The Obama administration has twice proposed eliminating them, most recently to help pay for the American Jobs Act.

Comstock calls such a move politically "vindictive." He says without those benefits, the industry would shift a lot of its operations abroad.

"You need that profit to be able to either return money to your shareholders or invest in the next thing," he says. "And in order for our industry to grow, since we're a depleting industry, you need to be able to have that money to invest into the next project."

On All Things Considered

Roger Bezdek is president of Management Information Services, a research firm that most recently completed a report on subsidies at the request of the nuclear industry.

He says it's true that green energy companies get a large piece of the government pie, relative to the size of the industry. And he says it's a matter of survival.

"Exxon would be around with or without tax subsidies for oil drilling," he says. "But most of these solar industries could not exist without the government subsidies."

Bezdek also argues that government money is most effective when it is spent on research and development, which make up the bulk of the subsidies to the nuclear industry.

But with the government now looking to pare back, subsidies of all kinds are at risk. And that could alter the playing field for energy companies again.

The audio of this story, as did a previous Web version, incorrectly says that solar and wind power companies receive $37 million a year in federal subsidies. They actually receive $370 million a year.