Accessibility links
Gun Violence Survivors Push For Tighter Restrictions They want lawmakers to narrow loopholes in the background check system for people who buy firearms. Supporters of the legislation say that might have made a difference last January, when a gunman in Tucson, Ariz., killed six people and wounded 13 others, including Rep. Gabrielle Giffords. 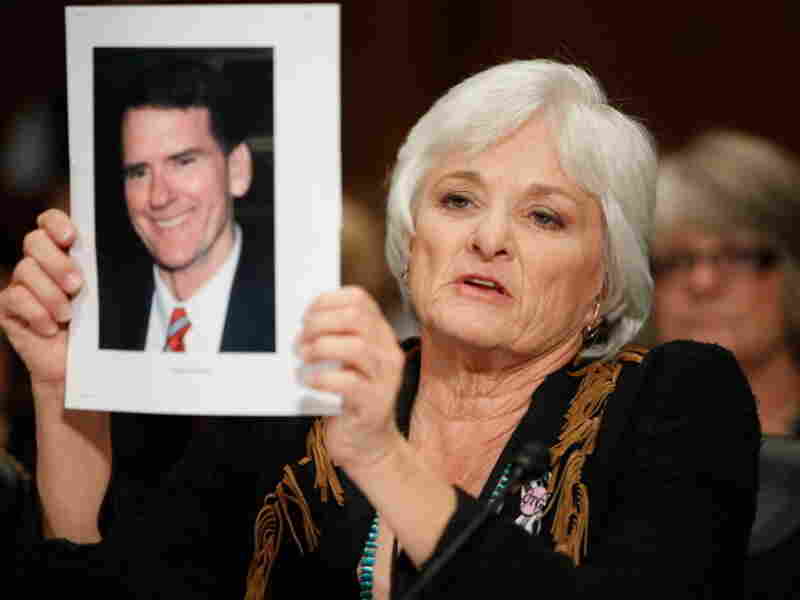 Patricia Maisch, one of the people who helped halt the Tucson shooting that killed six and wounded 13, including Arizona Rep. Gabrielle Giffords, holds up a photograph of victim John Roll, a federal judge, while testifying before a Senate subcommittee on Tuesday. Maisch testified in support of legislation that would strengthen federal power over the states' handling of background checks. Chip Somodevilla/Getty Images hide caption 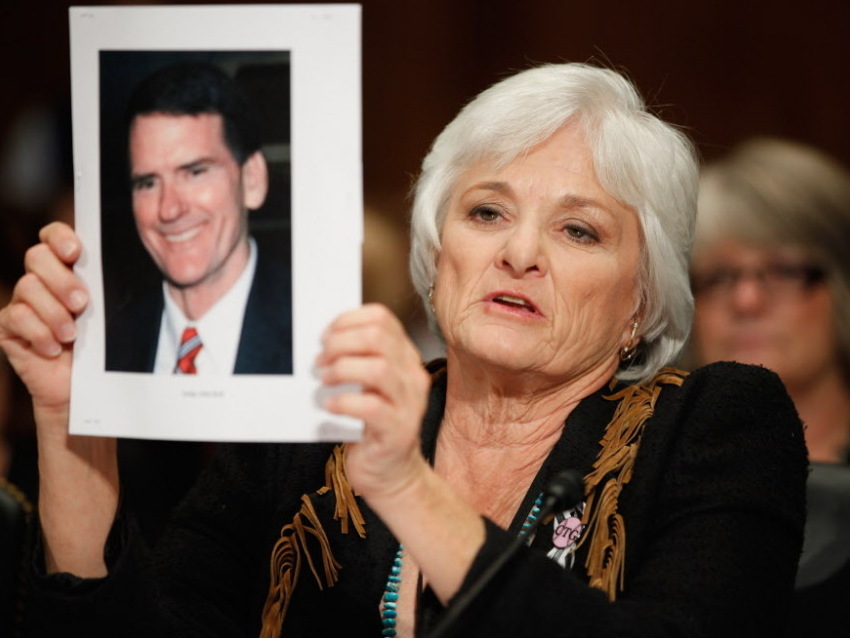 Patricia Maisch, one of the people who helped halt the Tucson shooting that killed six and wounded 13, including Arizona Rep. Gabrielle Giffords, holds up a photograph of victim John Roll, a federal judge, while testifying before a Senate subcommittee on Tuesday. Maisch testified in support of legislation that would strengthen federal power over the states' handling of background checks.

Dozens of gun violence survivors and family members of victims traveled to Capitol Hill this week to try to convince lawmakers to pass a bill that would tighten loopholes in the background check system for people who buy firearms.

Supporters of the legislation want to keep guns out of the hands of more criminals, domestic abusers and people who are mentally ill. They say that might have made a difference last January, when a gunman in Tucson, Ariz., killed six people and wounded 13 others, including U.S. Rep. Gabrielle Giffords. Jared Loughner, who has been charged in the shooting, is being treated after he was found not mentally competent to stand trial.

On Tuesday, the Senate hearing room fell silent when Patricia Maisch began to talk. She wrestled a clip of ammunition away from Loughner on a sunny day in Tucson earlier this year, and she says her life hasn't been the same since.

"Changing the past is impossible, no matter how desperately we want to change it," Maisch told lawmakers. "But it would be a pitiful shame if no action were taken to change the future."

Maisch asked a Senate Judiciary panel to move forward with a bill that would allow the Justice Department to withhold lots of federal grant money from states that don't share arrest and mental health records that should go into the national criminal background check system.

Since that system went online in 1998, authorities say, more than 1.6 million people have been stopped from buying guns. But a new report issued by supporters of the gun bill says federal agencies still aren't doing enough to comply with existing law, and many states are falling down on the job, too.

"The truth is we don't even know the full extent of the noncompliance with the [background check] law," Schumer said. "That's because many states have failed to even give an estimate to the federal authorities on how many relevant records exist."

John Feinblatt, chief policy adviser to New York Mayor Michael Bloomberg, pointed out what he sees as another huge loophole in the current system.

"If you buy a gun from a so-called occasional seller at a gun show or online or in a parking lot of a supermarket, federal law does not require a background check — no matter if you buy one gun or 20," Feinblatt said.

Feinblatt says an estimated 40 percent of guns sold in the U.S. fall under that loophole, which the Senate bill would close.

But even supporters of the bill harbor doubts as to whether it will go anywhere on Capitol Hill. Schumer, the bill's sponsor, pointed out that the U.S. House is poised to approve a measure that would increase people's ability to carry concealed weapons.

"It seems perverse that the first gun-related measure that this Congress plans to pass since the Tucson shooting is one that seeks to dismantle states' abilities to protect their own citizens," Schumer said. "It's like a bad dream."

But opponents of Schumer's gun loophole bill say it represents the real nightmare.

David Kopel, who teaches constitutional law at the University of Denver, says the background check bill violates the Constitution's guarantee of due process and runs afoul of states' rights, too.

"It is a Pandora's box filled with the dangerous consequences that are the inevitable result of making it a felony for law-abiding Americans to possess and use firearms," Kopel said.

Two Republican senators, Charles Grassley of Iowa and Jeff Sessions of Alabama, seemed to agree. They asked Kopel to offer examples of why, in his view, the proposal is unconstitutionally broad.

Kopel responded that the legislation would bar gun ownership based on an arrest — rather than a conviction. And he said the provisions related to mental health could apply to police officers ordered to undergo on-the-job counseling, not just the mentally ill.

Kopel said supporters of the bill may have good intentions, but it just won't work.

State and local officials, for instance, have raised logistical and practical concerns about what kind of information they must share. And Democrats noted that the Justice Department hasn't used its existing power to withhold a small amount of grant money from states that are failing to follow the current law on background checks.

Maisch, of Tucson, wanted to leave Congress with a different message.

"How much more pain, how much more sorrow, how many more deaths by guns must we endure before we do something?" she asked.