Accessibility links
Penn State Scandal Emboldens Other Victims People all across the country with no ties to the university are contacting lawyers and revealing secrets they've kept for years. "Without a doubt, there's a Domino effect," says one victim's attorney. 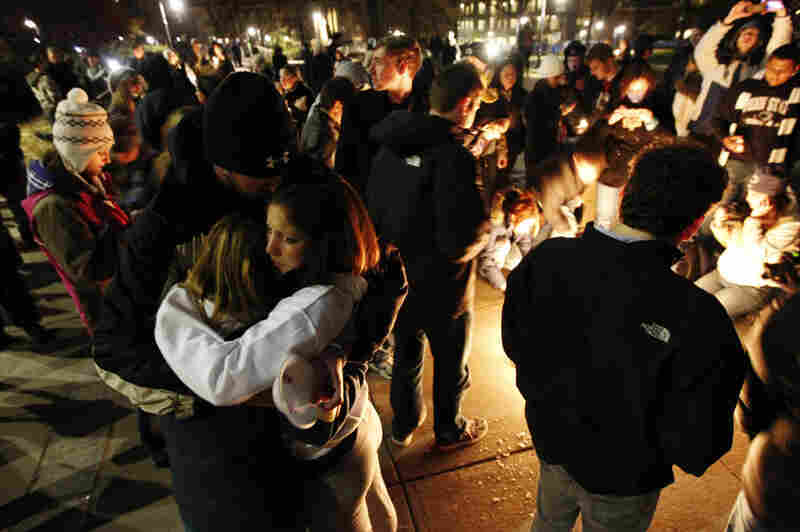 The man said the advances began when he was 10 years old. He was a fourth-grader and an altar boy at a Catholic school in Hudson, Mass. He said the priest would try to touch the altar boys when they were putting on their robes, and he'd invite them to the rectory, one at a time.

"He'd want to show us pornographic magazines, and ask us to take our pants down, and he'd take his pants down and expose himself and things like that," he said.

The man, who asked not to be identified, told the nuns that something was wrong with the priest, but they didn't believe him. For 38 years, he stayed silent — even after the Catholic sex abuse scandal broke a decade ago. But when he saw the allegations against former Penn State assistant coach Jerry Sandusky, something snapped.

"It hit home for me, because I have a son that's that age," he says.

His 10-year-old son is a star hockey player, and already the boy is being scouted by coaches in junior high school. Watching the Penn State story unfold, he saw a man allegedly "using his power as a football coach to lure boys with, 'Hey, we're going to have some fun,' " the man says, adding, "It happened to me. It could happen to my son."

So last week, he picked up the phone and called a lawyer. Indeed, the fallout from the Penn State scandal is prompting people with no ties to the university to contact lawyers across the country and reveal secrets they've kept for years.

"Without a doubt, there's a domino effect," says his attorney, Mitchell Garabedian.

Garabedian says 10 to 15 people called him last week, saying they were prompted by the Penn State news. In the Catholic sex abuse crisis, he notes, there have been few repercussions for church officials. But in the Penn State case, there have already been consequences. Penn State's president resigned, legendary football coach Joe Paterno was fired, and two administrators were indicted for perjury. Garabedian says all of this encouraged victims to come forward.

Several attorneys told NPR they've seen a spike in phone calls from people with long-buried secrets. Kelly Clark, an attorney in Portland, Ore., says about 30 of them came forward last week with stories of abuse by Boy Scout leaders, Catholic priests, Mormon leaders and family members. Clark says the events at Penn State have motivated a larger and more diverse group than church scandals have, because a sports scandal reaches a larger audience.

"They're sitting in front of their TV, expecting to see football, and they got all child abuse all the time, right in their face," he says.

Clark says Jerry Sandusky's interview with NBC on Monday only fans the flames. The former coach admitted taking showers and rough-housing naked with boys. But Sandusky said he had no sexual intent and that he is innocent of the charges.

"I've already had one email from a client saying, 'Are you kidding me? He thinks he's going to get away with that? "I showered with him, I played around with him, and I'm just a big old kid, but I didn't do anything sexual?" ' " Clark says. "Yeah, denial by the institutions and denial by the perpetrators tends to send sexual abuse victims into orbit."

And Clark says he expects more people to call in the days to come.