Accessibility links
Movie Review - 'Twilight: Breaking Dawn' - Baroque Nonsense Supernatural trans-species PG-13 eroticism? In the first half of the last Twilight installment, Stephenie Meyer's already gothic saga loses what little restraint it had — and tips over into territory that's both absurd and, given the target audience, a little alarming. 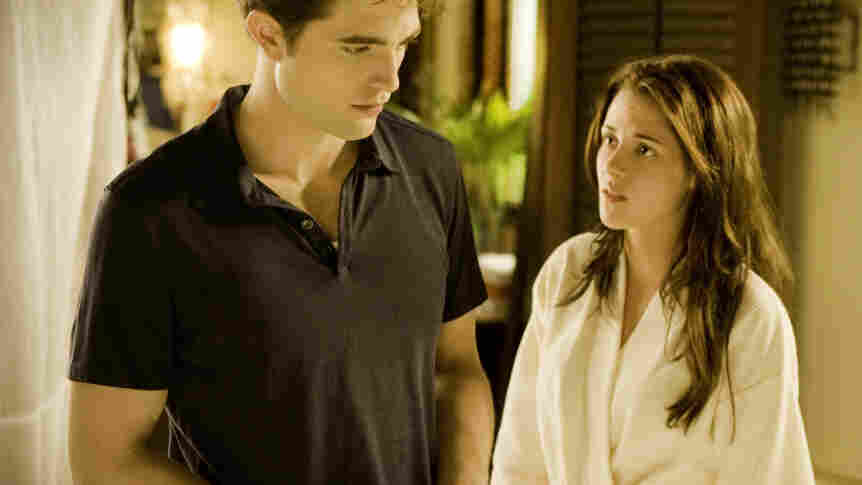 If you were to run into the ghost of Sigmund Freud* on your way out of The Twilight Saga: Breaking Dawn Part 1, my guess is he'd tell you he found the symbolism a little on the nose.

In fact to put it in the dry, scholarly language that the father of psychoanalysis might use, Breaking Dawn is where the Twilight series goes straight-up cuckoopants.

Up until this point, it's been an overwrought teenage love triangle with a sprinkling of gothic elements, filled with brooding and sparkling and the occasional vampire-werewolf Brawl For It All.

But here we enter the kingdom of the verifiably bonkers, where the subtext becomes text, the psychosexual horror-show takes flight, and we learn once and for all that Bella Swan wants nothing more than to be well and truly devoured from the inside out. This, we are given to understand, is the only way she will ever know real love.

But it starts with a wedding.

When we join them, vampire Edward (Robert Pattinson) and human Bella (Kristen Stewart) are in the final stages of event planning, which is always a stressful time, even if you and your groom have compatible DNA. Werewolf Jacob (Taylor Lautner), now relegated to the role of loser, stomps around snorting. (Lautner is a master thespian of the nostrils, though it must be said that he does gamely attempt, later in the film, to make lemonade out of a scene that cannot be explained without the phrase, "Well, when a teen wolf and a baby love each other very much ...")

From 'The Twilight Saga: Breaking Dawn' - 'A Great Service'

Around this time, we learn that while Bella still wishes to be transformed into a vampire, she doesn't intend to do so until after the honeymoon. This leads Jacob and Edward to have — right in front of Bella — the most awkward confrontation in the history of awkward confrontations, in which Bella's new husband and her jealous ex face off over whether the sheer power of her husband's affection will kill her on her wedding night.

Little does Jacob know that the better conversation would have focused less on vigor in the bridal suite and more on the importance of birth control; it seems that Edward, who offers an antenuptial confession to a past as a murderous, bloody-mouthed menace, has somehow managed to live for more than a hundred years and graduate from a gaggle of high schools without understanding where babies come from.

It will turn out that the wee one is just sitting in there in an impenetrable sac, turning Bella into an emaciated, gray-skinned hag determined to sacrifice herself so that her tiny monster can be born — or, more precisely, can exit by whatever means necessary, be they traditional, surgical or ... dental. 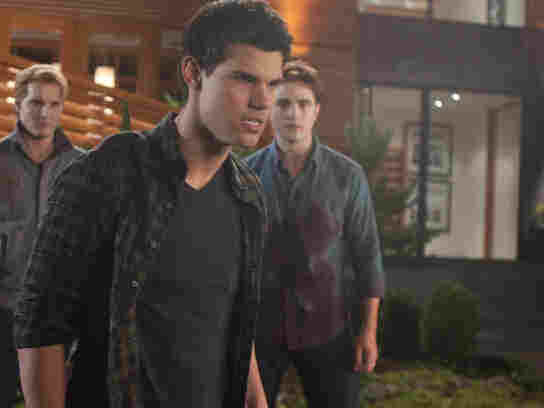 He's still around? We are duty-bound to report that Jacob (Taylor Lautner) is still part of a plot that grows increasingly preposterous, not that that will matter in the least. Andrew Cooper/Summit Entertainment hide caption 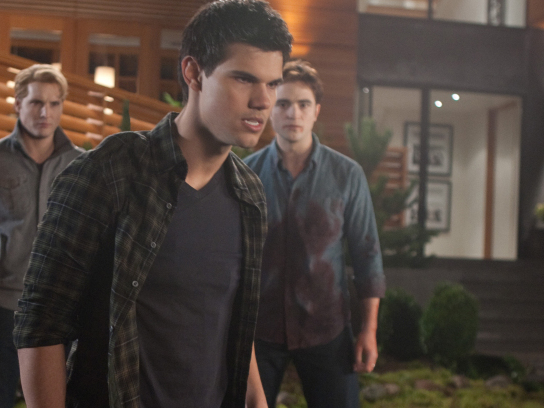 He's still around? We are duty-bound to report that Jacob (Taylor Lautner) is still part of a plot that grows increasingly preposterous, not that that will matter in the least.

There's a sense in which this is the most enjoyable Twilight chapter ever, in which author Stephenie Meyer takes the boring solemnity her heavy writing has always insisted on and throws it into a food processor with a few cups of Fangoria, a scoop of I Didn't Know I Was Pregnant, and three tablespoons of Ripley's Believe It Or Not! What comes out is utterly joyless, lifeless and pointless, but it's somewhat more audaciously so than the earlier films. Director Bill Condon (who directed and wrote the Oscar-winning screenplay for Gods and Monsters) may not have a light hand here, but he fully commits to a few bizarre plot elements that many expected would disappear from a Hollywood adaptation.

On the other hand: However wet-blanket it may seem to say so, the more this series embraces its identity as a dance of abusive emotional grotesques, the more bothersome its themes become. Entertainment is entertainment; fun is fun; Edward's and Jacob's stalker-like possessiveness and Bella's lack of agency are well-covered territory by now.

But when a saga popular with pre-adolescent girls peaks romantically on a night that leaves the heroine to wake up covered with bruises in the shape of her husband's hands — and when that heroine then spends the morning explaining to her husband that she's incredibly happy even though he injured her, and that it's not his fault because she understands he couldn't help it in light of the depth of his passion — that's profoundly irresponsible.

Yes, we're all having a good yuk over the unhinged quality of it all. And yes, it's a movie with a monster baby. (And an angry argument among a pack of wolves that's about as menacing as an outtake from Oliver & Company.)

But romanticizing an intimate relationship that leaves bruises and scars is a particularly terrible idea in a film aimed at girls. Talking about this is tiresome, but then so is putting it in the movie. From depicting the loss of virginity as a naturally violent, frightening, physically dangerous experience to making Bella a woman with no life at all outside of her literally all-consuming pregnancy, the narrative sledgehammers are all as distasteful as they are inelegant.

You know what this is. You won't be surprised, if you've read the books. This is a descent into madness, of a particularly gruesome kind.