Accessibility links
Fewer Babies Available For Adoption By U.S. Parents The number of children adopted from abroad has dropped by 60 percent over the past few years. Concerns about corruption are causing many countries to limit or abolish programs that have allowed needy children to be adopted by Americans. 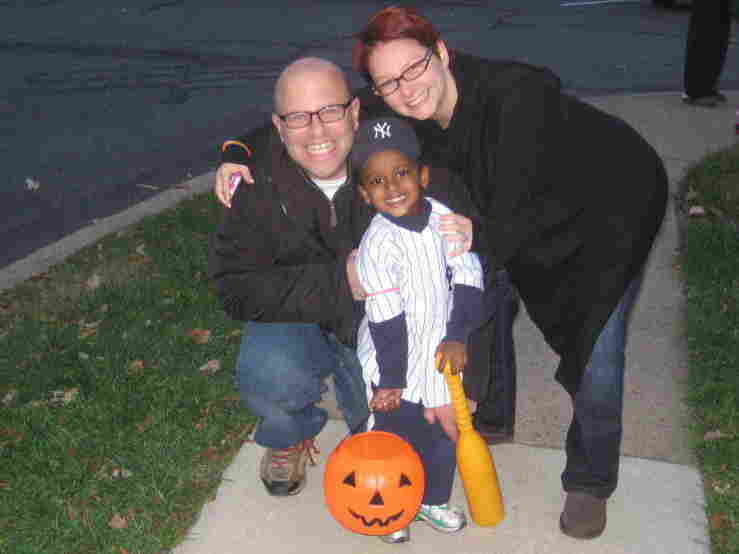 Brian and Regan Franklin adopted their son, Sammi, from Ethiopia in 2009. The family is ready to adopt another child from the African nation — but is finding it increasingly difficult. Here, the family celebrates Halloween this year. Courtesy of the Franklin family hide caption 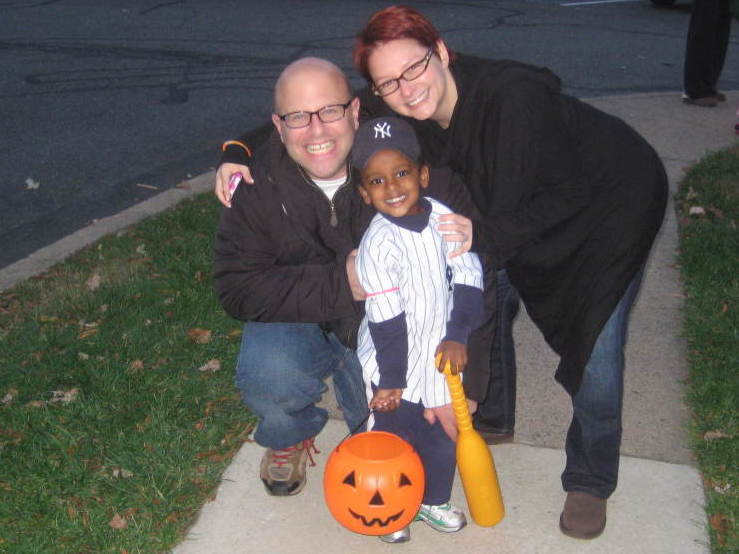 Brian and Regan Franklin adopted their son, Sammi, from Ethiopia in 2009. The family is ready to adopt another child from the African nation — but is finding it increasingly difficult. Here, the family celebrates Halloween this year.

Courtesy of the Franklin family

Three years ago, when he was only a few days old, Sammi was left in an abandoned building in Ethiopia, where police found him. In 2009, he was adopted and brought to his new home in Arlington, Va., by Brian and Regan Franklin.

Now that the Franklins are ready to adopt another child, Ethiopia — which has been one of the few African countries to allow adoptions by foreigners — is making it tougher.

Evidence of corruption within Ethiopia's adoption system means the Franklins and other American and European couples are facing much longer wait times and greater difficulty in bringing children back from that country.

Adoption agencies and orphanages there are closing fast. Just in the past year, the number of U.S. adoptions of Ethiopian children has dropped 30 percent.

It's become a familiar story in the world of international adoption. The nations that traditionally have sent the most children to the United States, including South Korea, China, Guatemala and Russia, have all cut back.

The number of international adoptions by American parents has fallen by almost 60 percent since its peak of nearly 23,000 in 2004. On Wednesday, the State Department released figures showing a drop of 15 percent just over the past year.

Since its peak in 2004, the number of international adoptions in the U.S. has plummeted nearly 60 percent.

"It's a depressing figure for those of us who care about getting homes for orphans around the world," says Chuck Johnson, president of the National Council for Adoption, an advocacy group.

Motivated by the desire to provide a home to a needy child, parents like the Franklins don't like to talk about international adoption as a business. But clearly the market forces of supply and demand have been at work.

A country opens its doors to prospective parents, whether because of war, natural disaster, civil strife or chronic poverty. Adoption agencies and their clients rush in, suddenly turning a small country such as Kazakhstan or Nepal into a major exporter of children.

The demand for healthy babies is extremely high among American and European parents, who are willing to spend upwards of $25,000 to $50,000 in fees and travel costs. That kind of money — multiplied many thousands of times over — has led to cases of corruption in many countries.

Numerous countries, including Guatemala and Vietnam, have experienced problems such as judges and lawyers taking bribes, and gangs or even police stealing children. In response to such charges, a nation's government might decide to put a halt to intercountry adoptions, as Romania did a decade ago. Other countries have seen their markets closed, with U.S. or European nations blocking visas for their children, as happened in Nepal.

In 2008, Guatemala was the leading source of international adoptions in the U.S., with 4,123 children. Over the past year, the number plummeted to 32, as Guatemalan authorities sought to regain control of the country's troubled adoption system. (The State Department releases adoption figures not by calendar years, but by fiscal years that run from Oct. 1 through Sept. 30.) 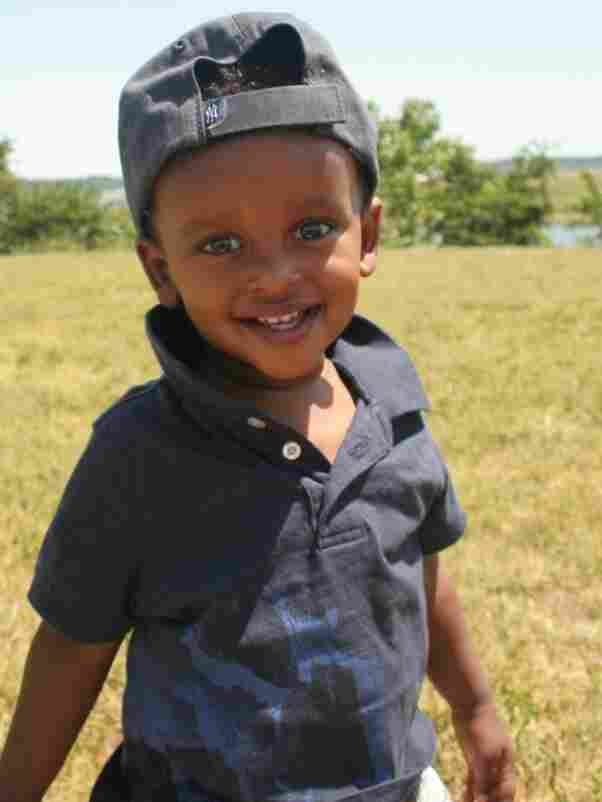 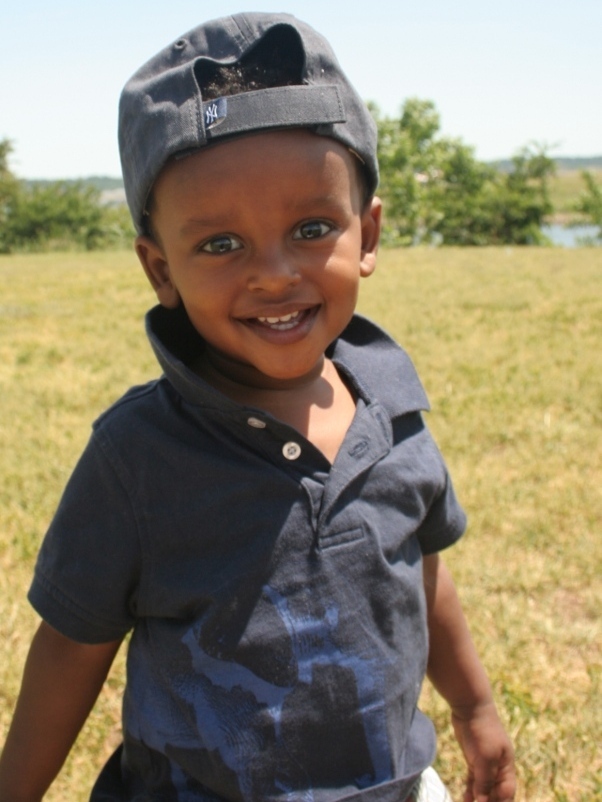 Sammi Franklin, now 3, lives with his family in Arlington, Va.

Courtesy of the Franklin Family

Under Guatemala's old system, no government agency had authority to match birth mothers willing to surrender children with adoptive parents. Private attorneys rushed to fill this void, leading to widespread allegations of baby buying and stealing.

Once a country such as Guatemala closes its doors to international adoptions, demand shifts to a new "sending" country such as Ethiopia, and the boom-and-bust cycle repeats itself.

"What we see is a country becoming fashionable," says Susan Jacobs, the State Department's special adviser for children's issues. "People go to the countries where it's easiest to adopt, where the rules are lax and you can do an adoption quickly and perhaps get a baby."

That's why the Hague Convention on intercountry adoption is important, Jacobs says. The international accord, drafted in 1993 and implemented by the U.S. in 2008, is meant to regulate a formerly wide-open international adoption marketplace.

"We wish every country were a member of Hague," Jacobs says. "There is a much greater certainty there won't be fraud."

More than 80 countries have signed on to the convention, including China and India. But many adoption advocates worry that the new rules have not done enough to curb the worst abuses.

There are no penalties for failing to enforce the Hague's protections. And the U.S., which despite recent declines remains the largest market for international adoptions, continues to process applications from non-Hague countries, including Russia and Ethiopia.

In 2005, China, Russia and Guatemala accounted for nearly 80 percent of all international adoptions in the U.S. Since then, however, each country has seen a significant drop in the number of children it sends to the U.S.

"Whenever you regulate something that's been unregulated before, of course we're going to see challenges," says Susan Bissell, chief of child protection for the United Nations Children's Fund, or UNICEF.

The agreement came in response to a notorious incident last year in which a Tennessee woman sent her adopted 7-year-old son on a plane alone back to Moscow with a note saying, "I no longer wish to parent this child."

The airplane incident and other examples of abuse led Russia to reduce the number of children Americans could adopt from a peak of 5,862 in 2004 to 970 over the past year.

But the vast majority of the 50,000 Russian children adopted by American parents since 1993 are now growing up in secure and supportive homes.

"If adoptions were not successful — if most adoptees didn't do pretty well and most adopted parents weren't having success — this would not continue," says Victor Groza, a professor of parent-child studies at Case Western Reserve University.

Advocates of international adoption say that the rare cases of abuse and relatively isolated examples of corruption should not be used as an excuse to deprive needy children of the care and nurturing of a family.

"Instead of Hague cleaning up a potentially corrupt situation, everything closes down," says Stevan Whitehead, vice president of Overseas Adoption Support and Information Service, a group that offers support to British families that have adopted abroad.

"If they're lucky, the kids are stuck in orphanages," Whitehead says, "and if they're not lucky, they're dead." 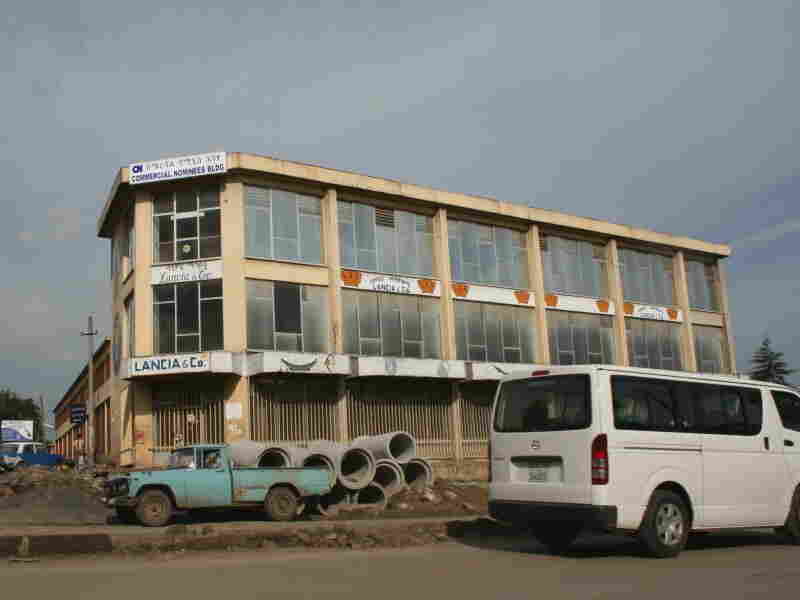 Sammi was left in this abandoned building in Addis Ababa, Ethiopia, when he was just a few days old. Courtesy of the Franklin family hide caption 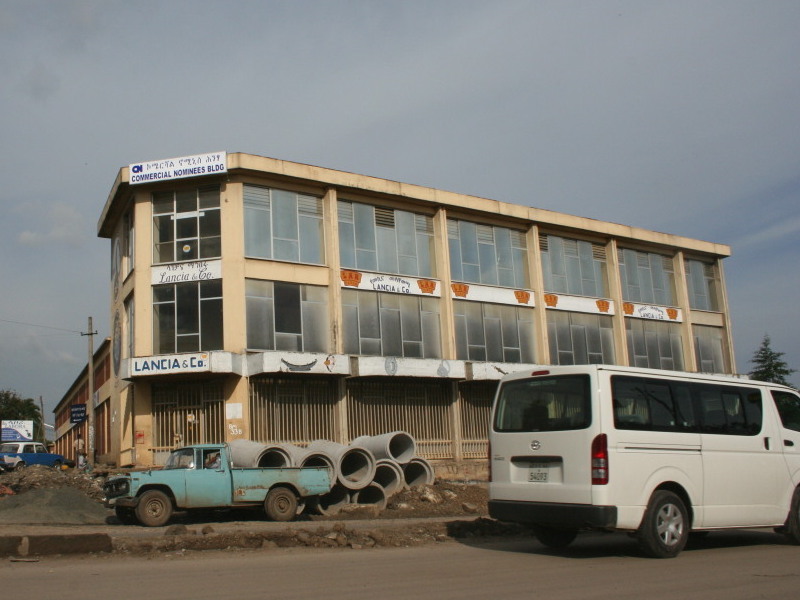 Sammi was left in this abandoned building in Addis Ababa, Ethiopia, when he was just a few days old.

Courtesy of the Franklin family

There seems to be a consensus within international child welfare circles that orphans should be kept within their own families or communities whenever possible and adopted domestically if need be.

How often international adoptions should be allowed for children who can't find a home in their country of origin, however, is a matter of heated debate.

"It's a tumultuous time right now in the world of intercountry adoption," says Adam Pertman, author of Adoption Nation.

Some advocacy groups believe that the best way to improve the lives of needy children is to provide services and support for families in their home countries.

"I don't want to say there's a groundswell, but there is definitely a lot more going on to build up child protective systems than we've ever seen before," says Bissell, of UNICEF. "There's an increased ability of countries to take care of their children and a desire to do so."

But Bissell recognizes that children's services remain underfunded, particularly in the poorest countries.

For that reason, caring for the world's most vulnerable children requires both a long-term and a short-term strategy, says Brian Franklin, a public relations consultant who is chairman of the board of the Joint Council on International Children's Services, a coalition of nonprofit groups in the U.S. that includes adoption agencies.

Alleviating poverty should be the ultimate goal, Franklin says, but in the meantime there are millions of orphans around the world who could use a home, many of them in the United States.

"My perception is that it's becoming harder and harder to adopt children while the need is getting bigger," he says.

"I find it incredibly sad, really," Franklin says. "Every day, I look at Sammi and I can't believe there are still kids there and they're not going to be able to get a loving family."