Accessibility links
When Hard Times Means Leaving Career For Job Alice Eastman, a single mother living in Wheaton, Ill., tried to make ends meet on unemployment while she hunted for a job in her field after being laid off in 2010. After a long, fruitless search, Eastman, a once highly paid professional, took a minimum-wage job at Target. 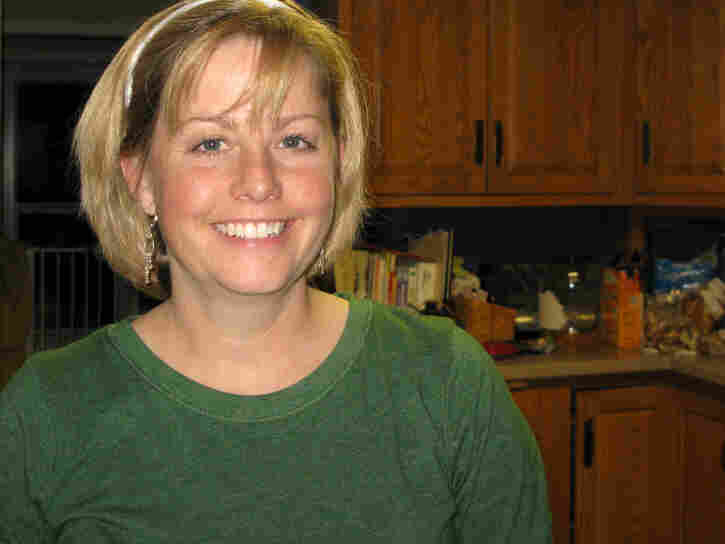 After a long job search, Alice Eastman, a once highly paid professional, now works at Target. "I've climbed to pretty much the top of the one ladder, and now I'm starting at the bottom rung of a different ladder. It's a job. It's not a career," she says. David Schaper/NPR hide caption

Alice Eastman, a single mother living in Wheaton, Ill., is one of many Americans who, after losing her job, tried to make ends meet on unemployment while she hunted for a job in her field. Then after a long, fruitless search, she took a lower-paying job in retail.

Eastman had a pretty good job making $75,000 a year at the park district in the Chicago suburb of Bolingbrook, heading up its Department of Natural Resources.

"I was hired as the first superintendent of that department. My first day on the job was interviewing architects to build a nature center, which was pretty awesome," she says.

In almost five years there, Eastman oversaw construction of the LEED-certified nature center, hired its staff and ran its educational and conservation programs. But in August of 2010, she was let go as new park district leaders started cutting costs and eliminating some of the higher salaries.

She says she was angry and demoralized. With a degree in botany and 20-plus years of experience in natural resources, Eastman joined the growing ranks of the unemployed.

"I was let go on a Friday, and I was on the phone and online Monday registering for unemployment, and I found out that I was going to be collecting a third, a little less than a third, of what I was making before," she says.

Eastman says the $531 a week in unemployment benefits kept the lights on, put food on the table for her and her 17-year-old son, and helped pay the mortgage while she looked for new jobs in her field.

But she found nothing.

"Not that many municipalities and park districts are spending money on natural resources management right now," she says.

So Eastman started casting a wider net, applying for just about anything.

"I think I applied for almost 50 different positions between August and March. I got one phone call — one reply — saying, 'Yeah, come in and interview.' And that was at Target — one."

So when Target offered her part-time work last March at $8.25 an hour, she took it.

That she's not alone as a once-highly paid professional in a job paying Illinois' minimum wage makes it a bit easier to swallow. And Eastman just recently was promoted to a full-time team lead position at her Target store. She now makes $12 an hour, with benefits.

DuPage County, Ill., By The Numbers

Eastman is grateful for what she has, but having just turned 45, with one son off at college and another going off to school next year, she recognizes she is entering a new, uncertain phase in her life.

"I kind of look at it as, I've climbed to pretty much the top of the one ladder and now I'm starting at the bottom rung of a different ladder. It's a job. It's not a career. I had the career. I would love to be able to go back to a career. I'm not sure if I'm going to be able to in what I was doing," she says. "Not here. I know I can't here."

So Eastman has just put her modest home in suburban Wheaton up for sale, and she's looking to maybe move south in hopes of finding a new life's work.