Accessibility links
Political Climate Ripe For A Third-Party Prospect Dissatisfaction with both parties is at an all-time high, and trust in Washington is at an all-time low — exactly the kind of environment that is welcoming for an alternative to the Democrats and the Republicans. "There's too much opportunity, too much anger with politics," says one pollster. 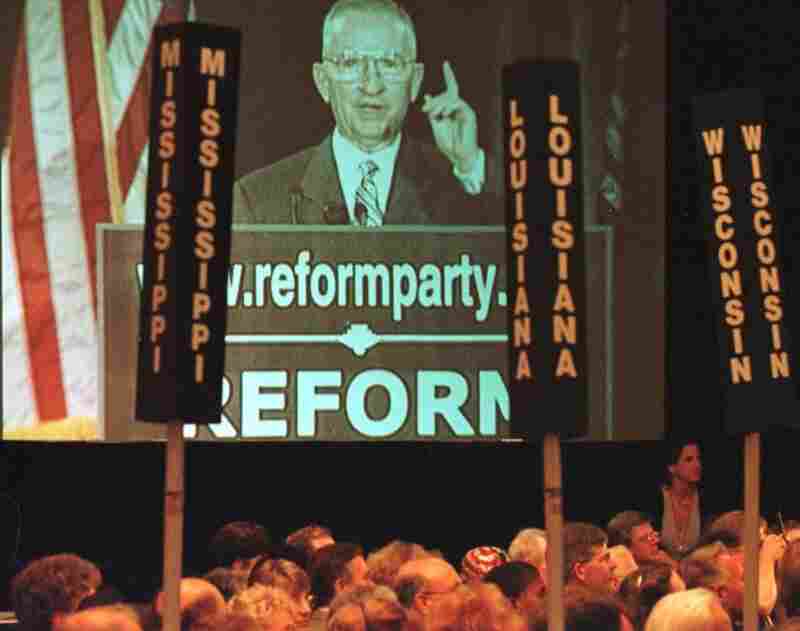 Ross Perot, shown on a video screen, addresses the Reform Party's national convention in July 1999 in Dearborn, Mich. The billionaire founder of the Reform Party, Perot ran for president as a third-party candidate in both 1992 and 1996. Jeff Kowalsky/AFP/Getty Images hide caption 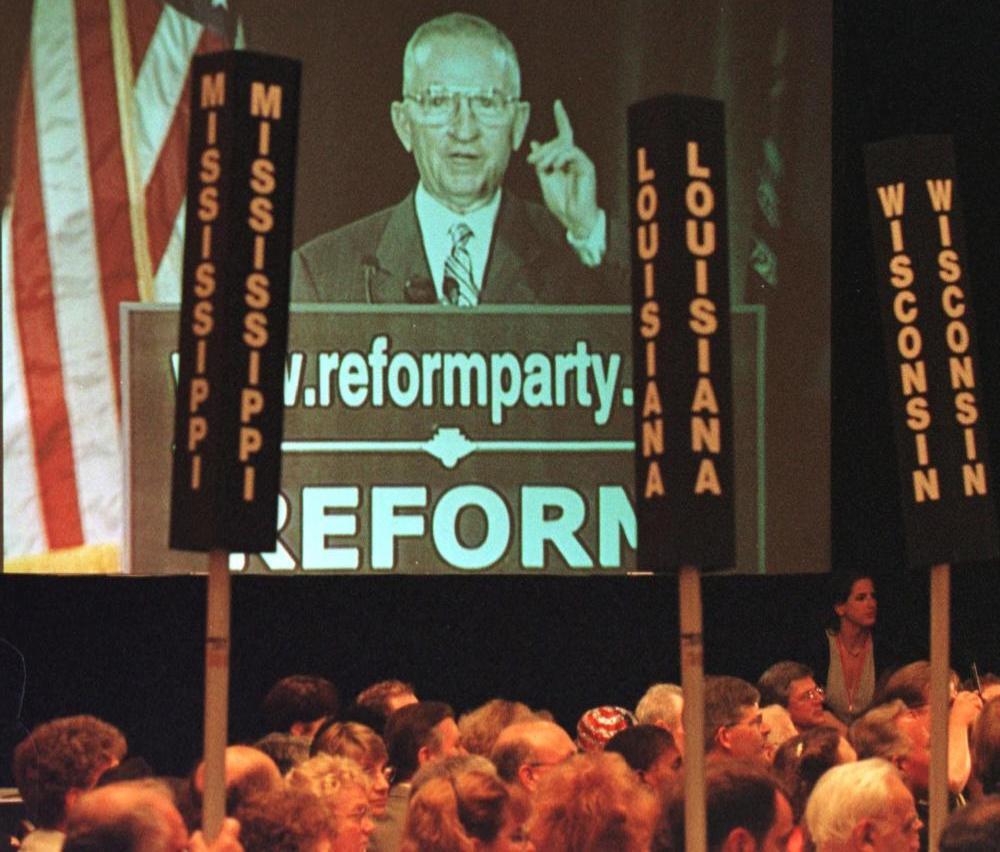 Ross Perot, shown on a video screen, addresses the Reform Party's national convention in July 1999 in Dearborn, Mich. The billionaire founder of the Reform Party, Perot ran for president as a third-party candidate in both 1992 and 1996.

This is the kind of political climate that is welcoming for an alternative to the Democrats and the Republicans.

Pollster Stan Greenberg worked for Bill Clinton in 1992, when third-party candidate Ross Perot roiled the race. If it happened back then, Greenberg says, it can happen again next year.

"I can't imagine that with 85 percent of the country thinking we're on the wrong track that there won't be a third-party candidate," he says. "There has to be. There's too much opportunity, too much anger with politics."

The message of the last three elections is clear: Voters are in an anti-incumbent, anti-Washington and now anti-Wall Street mood. Former Republican Rep. Tom Davis says voters see the system as rigged.

"They look at the political system as absolutely broken," Davis says. "This is expressed by the fact that today the fastest-growing element in the electorate are independents. Voters given the opportunity to cast a protest, or to go a certain way — I don't think it has been riper for that in probably a generation."

I can't imagine that with 85 percent of the country thinking we're on the wrong track that there won't be a third-party candidate. There has to be. There's too much opportunity, too much anger with politics.

Pollster Stan Greenberg , who worked for Bill Clinton in 1992

There already is an organization, called Americans Elect, trying to make sure voters get that opportunity.

The group's chief executive, Kahlil Byrd, says they're already on the ballot in Florida, Michigan, Ohio and Nevada.

"Currently, California officials are counting 1.6 million signatures — and we expect to be on the ballot in California by mid-December," he says.

Americans Elect is backed by wealthy investors, and it will have the $20 million to $30 million it takes to get on the ballot in all 50 states. Then, next June, it will hold an online convention, where participants can draft an independent ticket for president.

Theoretically, anyone could emerge. But Americans Elect seems to be looking for fiscally conservative, socially liberal candidates — think Grand Bargain instead of Grand Old Party.

Columnist and former Clinton administration official Matt Miller doesn't think either party is telling Americans the truth about what needs to be done to solve the country's problems. He's a fan of Americans Elect — and he's drafted a stump speech for what he hopes will be a radically centrist third-party candidate.

"How's this for something different?" the speech reads. "I want to raise your taxes, cut spending on programs you like, and force you to rethink how we run our schools, banks, armies, hospitals and elections."

A third-party candidate probably couldn't win the election. But in the past, they've often had an impact on the race — particularly in a close race, as the early polling suggests 2012 will be.

In the last three races where there's been a prominent third candidate, the incumbent or his party lost. In 1980, Jimmy Carter had John Anderson; in 1992, George H.W. Bush had Ross Perot; and in 2000, Al Gore had Ralph Nader. Republican strategist Ed Rogers wishes the same for President Obama next year.

"I wish somebody good and credible from the left would wander into the race and scramble the numbers in a few key states — Ohio, Wisconsin, Pennsylvania — for Obama. Some sort of labor purist or eco-fanatic or something," says Rogers. "Yeah, I'd be for that."

That's exactly what keeps Democrats up at night. But Rogers worries about a challenge from the right — and it doesn't even have to be a national candidate.

"As an example: An anti-immigration candidate with some organization and some money on the ballot in Colorado and Arizona and New Mexico — it got 3 to 5 percent of the vote, [and] you have Obama win with 46 percent or less," he says. "You know, an angry Tea Party purist that just wants to rage against the machine — look out. That could be real trouble."

But until an actual third-party ticket emerges, it's impossible for political professionals to game out who it would hurt — Obama or the Republican candidate.

"Certainly there's going to be a third-party candidate," says pollster Greenberg. "And with absolute certainty, we have no idea what's going to happen."

Nothing about this election, Greenberg predicts, is going to follow a predictable path.