Accessibility links
Attacks Target Palestinians In Israeli Towns Over the past few months, militants have vandalized several Arab sites in the coastal Israeli city of Jaffa. For years, Jews and Arabs coexisted there in relative peace. Now, locals say racist sentiment is on the rise, as settler groups focus on Palestinian populations inside Israel. 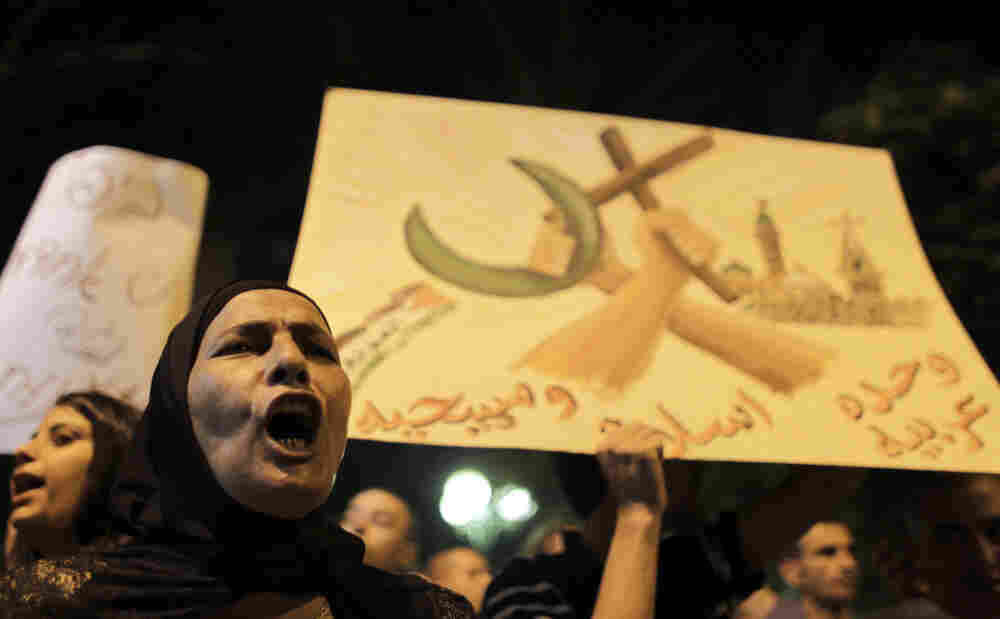 A woman shouts slogans during a demonstration against the desecration of headstones at a Muslim and Christian cemetery in Jaffa, Israel, last month. A few dozen Israelis and Palestinians turned out in a show of protest against recent attacks. Ammar Awad/Reuters /Landov hide caption 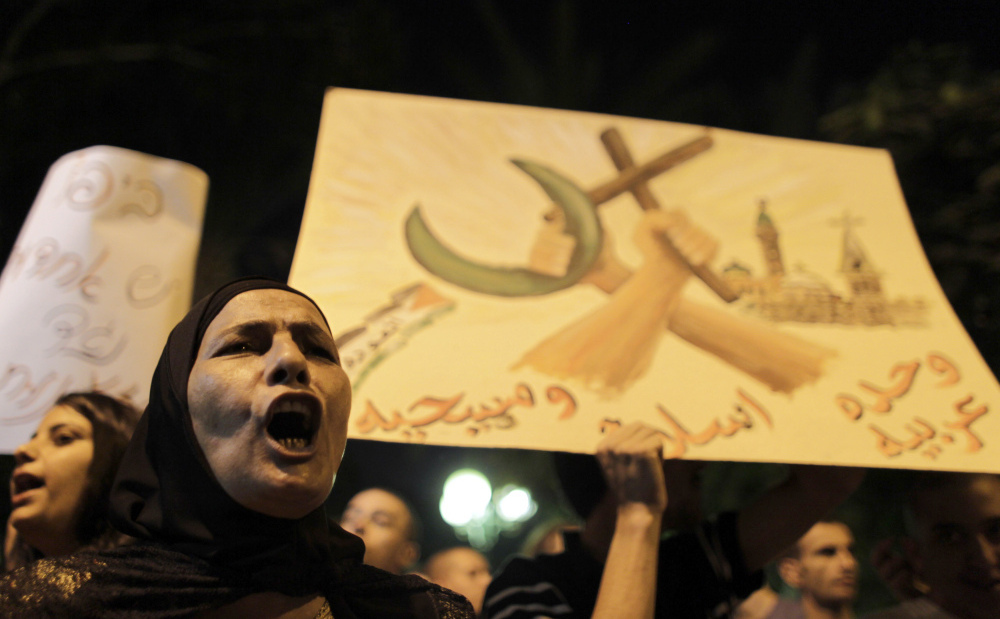 A woman shouts slogans during a demonstration against the desecration of headstones at a Muslim and Christian cemetery in Jaffa, Israel, last month. A few dozen Israelis and Palestinians turned out in a show of protest against recent attacks.

In Israel, tensions are rising between Jews and Palestinian Arabs, who make up about 20 percent of the population. Over the past few months, several Arab sites have been vandalized by militant Jews who left graffiti such as "Death to Arabs."

At a recent demonstration on a street corner in the central Israeli town of Jaffa, protesters chant in both Hebrew and Arabic. The crowd is made up of Jews and Palestinians angry over the attacks, which have rocked their community.

Tamar Avia, a 35-year-old Jewish resident of Jaffa, says the neighborhood is being torn apart.

"The problem is national, but it is one that starts on a personal level," she says. "It is a problem that is hitting us in Jaffa hard." 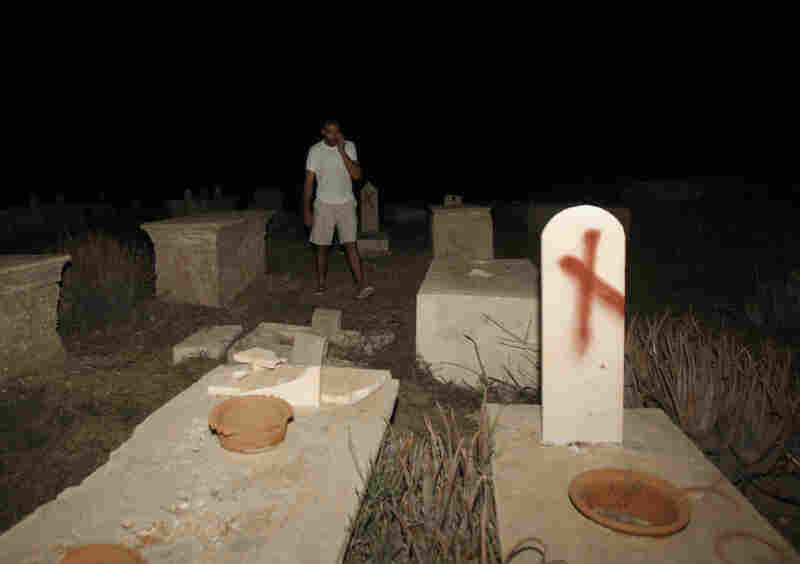 A man stands near tombstones vandalized in a cemetery in Jaffa, Israel, on Oct. 8. Headstones at the Muslim and Christian cemetery were defaced with messages like "Death to Arabs." Ahmad Gharabli /AFP/Getty Images hide caption 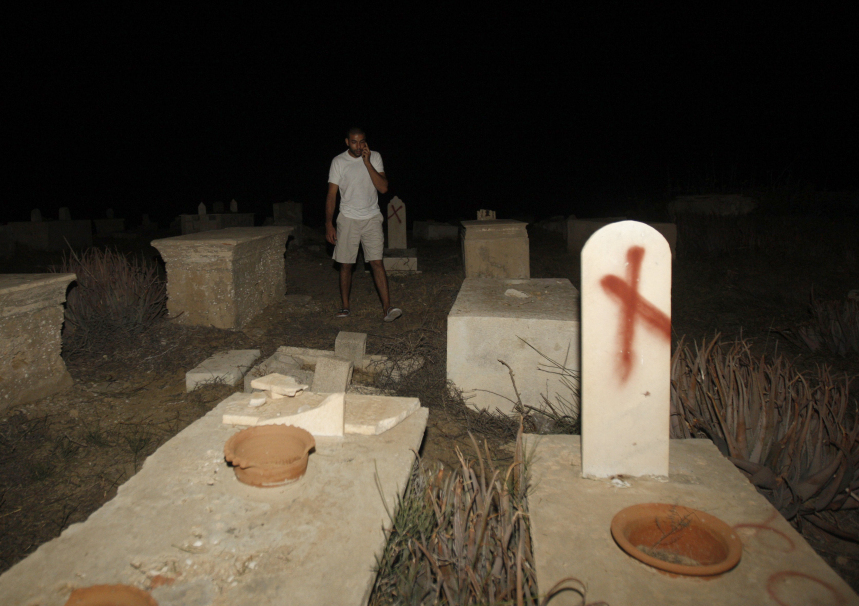 A man stands near tombstones vandalized in a cemetery in Jaffa, Israel, on Oct. 8. Headstones at the Muslim and Christian cemetery were defaced with messages like "Death to Arabs."

Over the past few months, there has been a series of attacks targeting Palestinians in Israel. In October, a mosque in the northern Arab village of Tuba-Zangariya was torched and a Muslim cemetery in Jaffa was vandalized. At both sites, graffiti were found linking the attacks to Israeli settlers.

Avia says she came to the protest because she was shocked by what is happening. She points out that many right-wing Israelis use different terms for Palestinians who live within Israel.

"They don't call them Palestinians; they call them Israeli Arabs. That's their way to erase their Palestinian identity and kind of contain them within Israel," she says. "The agenda is to have a purely Jewish state and to get rid of all Palestinians, the ones in the West Bank and in Israel."

Avia says these kinds of attacks are new in Jaffa, a coastal community hugging the southern outskirts of Tel Aviv, Israel's largest city.

For years, Jews and Arabs coexisted there in relative peace. That was interrupted in early 2010, says Fatima Helewa, a local Palestinian activist. That's when Bemuna, a construction company that specializes in building subsidized homes for religious Jewish families in West Bank settlements, started building in Jaffa.

Its first project was in the largely Palestinian neighborhood of Ajami. The Israeli Association for Civil Rights petitioned Israel's High Court to stop the building, claiming that Bemuna's openly stated policy of providing apartments only to Jews was racist.

The court ruled against the association, and Bemuna continues to build in Jaffa.

A spokesman for Bemuna insists there are no ethnic tensions here, but he refused to answer questions on tape. Helewa, who lives just minutes away from one of the building projects, disagrees.

"I think it's a development of racism," she says. "I know many Jewish friends, but I think the general society of Israel is developing racism of Arab people inside and in the West Bank."

She feels that groups such as Bemuna are becoming increasingly popular across Israel. She points to a series of attacks that have occurred this year against Palestinian communities in both the north and the south of Israel.

"You can't argue with me that racism is not developing here," she says. "It's a fact."

Helewa stands in front of the once popular restaurant Abu Elabed, set ablaze earlier this month and spray-painted with graffiti calling for death to Arabs.

She says the attack made her feel unwelcome in her own hometown.

"Arab people, they already live with the Jews. We're living with them years by years," she says. "It's just that Zionism made the settlers more and more racist."

For now, she says that all she can do is continue to protest — and hope that more from the community join her.