Accessibility links
'The Descendants': In Paradise, A Stranger To Himself A father (George Clooney) struggles to reassess his past and navigate his future after his wife is gravely injured in a water-skiing accident. Critic David Edelstein says the film blends broad comedy 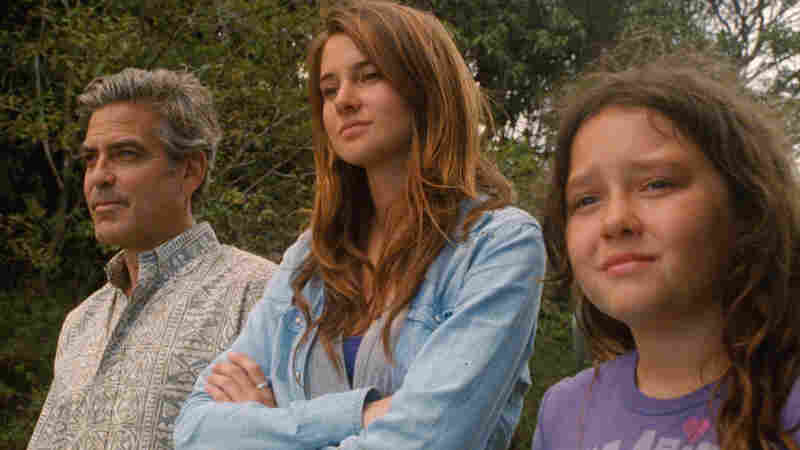 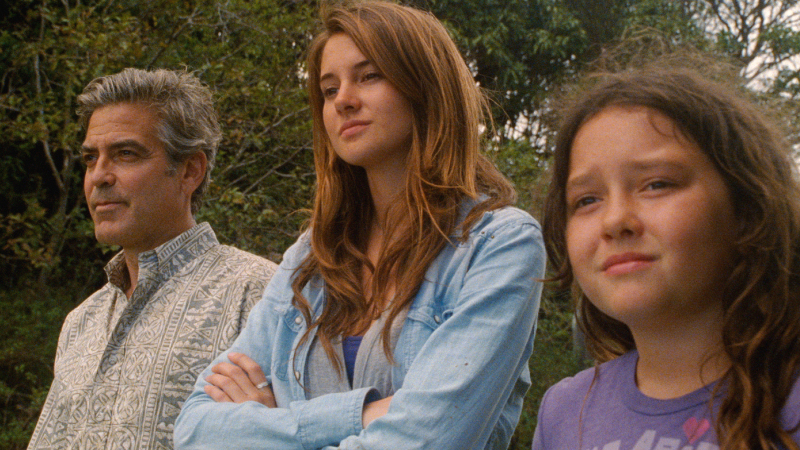 Rated R; for some language and sexual references

From 'The Descendants' - 'The Good Father'

From 'The Descendants' - 'Shaking Off The Loser Boyfriend'

'Shaking Off The Loser Boyfriend'

From 'The Descendants' - 'You Probably Know My Husband'

'You Probably Know My Husband'

Writer-director Alexander Payne is either the American cinema's most acerbic humanist or its most empathetic jerk. Whichever it is, the protagonists of the novels he adapts are outsiders who pay an emotional price for their sense of superiority.

Payne's The Descendants is his first film to be told from the perspective of a person of privilege, but real-estate lawyer Matt King (George Clooney) is the ultimate outsider: a stranger to his family and his lifelong home, Hawaii.

Matt grew up wealthy in paradise, but in voice-over he says paradise can go bleep itself. He's actually the great-grandson of a native princess, a woman who was the last direct descendant of King Kamehameha, but she married a non-native (or haole) businessman and died relatively young, after which Matt and his many cousins were raised on the haole end of the spectrum.

Now, these descendants are scheduled to meet to decide the fate of their principal inheritance — 25,000 acres of untouched coastal land, which a developer would like to buy and cover with hotels and golf courses. Matt, as trustee, will make the final decision — a lot of power for anyone, let alone someone whose life is falling apart.

When we meet him, his wife has been in a coma for 23 days, and her prognosis is iffy. Matt refers to himself as the "back-up parent" to their two daughters. He barely knows how to talk to his 10-year-old, Scottie, who's often in a world of her own; 17-year-old Alexandra has had drug problems, and now goes to boarding school on another island. When Matt brings her home to see her mom, she insists on inviting an old friend, a stoner named Sid (Nick Krause) who's a little too forward.

In fact, everything Sid says is a reflexive taunt, a provocation that raises hackles. But he's emblematic. The Descendants gets to you by mixing devastating sadness with sick humor — and showing how they're karmically connected. It turns out Sid has had a sad life, and that his point of view has weight. In Payne's dramatic universe, there's no such thing as inappropriate.

The Descendants is closely based on a novel by Kaui Hart Hemmings, but the casting of Clooney as a self-absorbed workaholic can't help but throw it slightly out of whack: It's hard to accept he could be that much of a non-presence in peoples' lives. 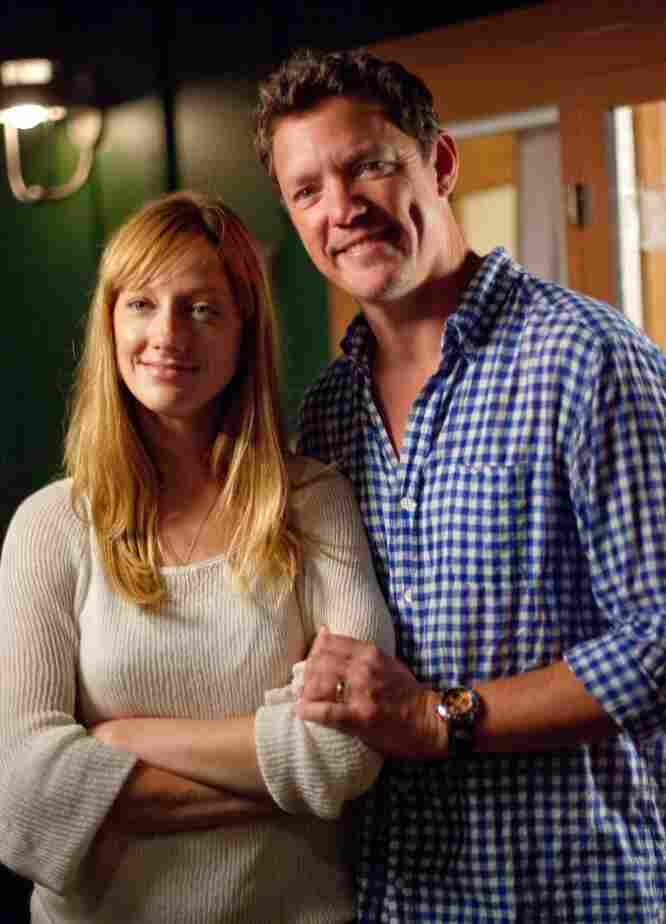 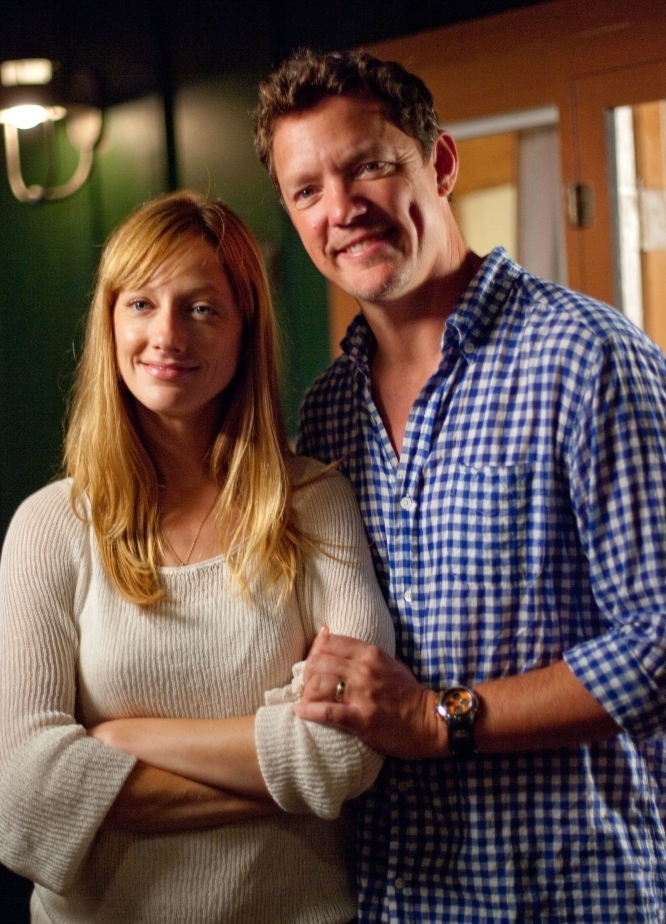 And yet much of Clooney's recent career has been an attempt to fight his own glibness, even his own ridiculous handsomeness, and he does so triumphantly here. It's a wonderful performance — morose, then manic, then somehow morosely manic. Early on, Matt discovers that his wife, Elizabeth, had been seeing another man before her daredevil water-skiing accident, and his sweaty desperation to find out who and why is both hilarious and emotionally right.

Just when you think a character is too much of a cartoon, there'll be a moment of revelation, a window through the facade. A too-tanned Beau Bridges plays the most prominent of Matt's cousins; he's all rummy Hawaiian bonhomie until you glimpse the core of deviousness.

Judy Greer is the wife of Elizabeth's lover, and her final scene is a triumph of Payne's vision — deeply poignant until she starts to rant, and then all of a sudden she's a comic banshee. Best of all are the kids: Amara Miller as 10-year-old Scottie, still a child withdrawing into fantasy; and Shailene Woodley as the willowy beauty Alexandra, who's had to grow up too fast.

Elizabeth King is played by Patricia Hastie, seen only in her hospital bed but for the film's first shot — a close-up of her face, elated, as she water-skis.

Why does Payne open with that image, so remote from the narrator's point of view? I think he wants it to come back to us later, when we know how she got to that moment.

It's at that point that we see her husband — and the other characters, with their clownish jealousies and pettiness and greed — differently. It gives this broad comedy the sting of tragedy. The Descendants is a great movie. (Recommended)