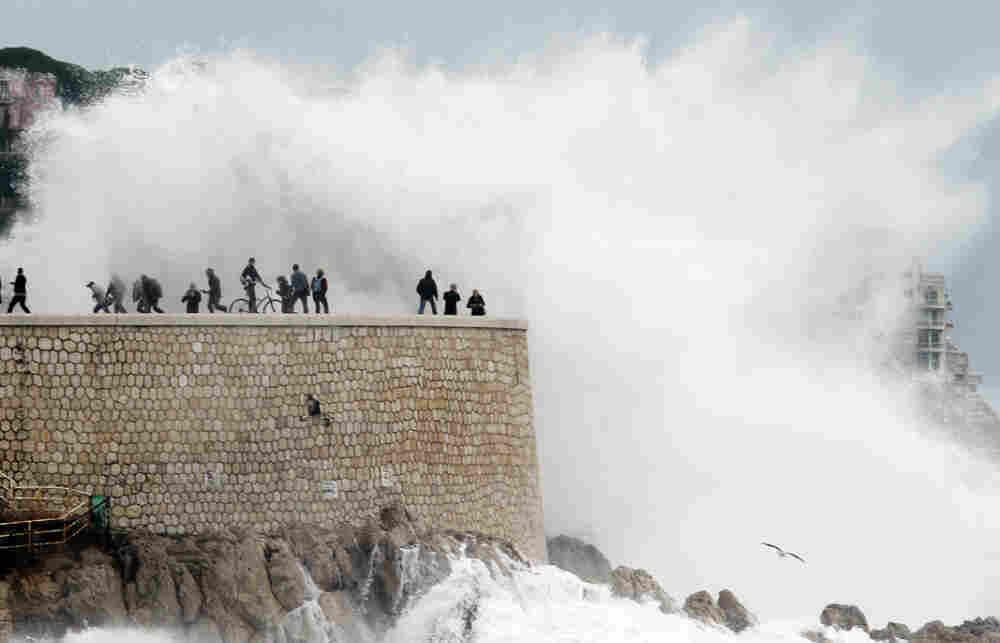 A U.N. climate panel says that we can expect more extreme weather conditions as a result of climate change. Above, people run from a high wave on Nov. 8 in Nice, France, where heavy rain and flooding forced hundreds to evacuate. Vallery Hache/AFP/Getty Images hide caption

Brace yourself for more extreme weather. A group of more than 200 scientists convened by the United Nations says in a new report that climate change will bring more heat waves, more intense rainfall and more expensive natural disasters.

These conclusions are from the latest effort of the Intergovernmental Panel on Climate Change — a consensus statement from researchers around the world.

And since this is a consensus, the conclusions are carefully couched. Take, for example, the issue of rainfall. "It is likely that the frequency of heavy precipitation will increase in the 21st century over many regions," says the report, which defines "likely" as more than a 66 percent chance.

You might expect heavy rainfall would lead to flooding, but the report is reluctant to make that strong a link. One of the authors, David Easterling from the National Climatic Data Center in Asheville, N.C., says dams and flood-control projects in some places can handle the heavier bursts of rain, so it's not automatically the case that downpours lead to flooding.

Another example of this deliberate, cautious approach is evident in the report's conclusions about hurricanes and typhoons (hurricanes' equivalent in the Western Pacific). The science suggests strongly that hurricanes will eventually become more powerful, "but we won't really be able to detect an increase for another 30 to 40 years," Easterling tells NPR. "It may be there, but the increases are not huge. It's not like you'll see a doubling of wind speeds, but [storms are] expected to become more intense."

That said, the report finds no compelling evidence that hurricanes and typhoons will become more frequent as a result of climate change.

Much clearer is the trend about who is vulnerable to disaster. The report finds that 95 percent of the lives lost to natural disasters are in the developing world, where people often lack the infrastructure and resources to cope with calamity. Most of the financial costs are borne by the developed world, where valuable property is in harm's way. And that's not simply because of natural disasters — it's principally because of the deliberate choices we've made to develop along vulnerable coastlines and floodplains.

You don't have to look far for evidence of those costs. This year "has been one of the most costly from extreme weather events, with more billion-dollar events than ever before," says Mindy Lubber, president of Ceres, a nonprofit that helps businesses and investors adapt to climate change. "The drought and wildfires in the Southwest and Southern Plains, for example, cost more than $9 billion in direct damage to cattle, agriculture and infrastructure." And Hurricane Irene, which killed at least 45 people, cost an additiional $7 billion.

"Perhaps these multibillion-dollar events that are coming at us fast and furious will be enough to get policymakers to sit up and listen and realize we've got to change — and we have to move quickly," Lubber says.

And perhaps a report that trips over itself to be extra cautious — as the IPCC's tangled jargon frequently does — will also garner more credibility for the statements it does make with confidence.