Accessibility links
U.S. Keeps Wary Eye On Kenya's Campaign In Somalia Kenya's incursion into Somalia last month to go after the militant Islamist group al-Shabab caught the United States and others off guard and has raised alarms among aid groups. While Kenya has asked for U.S. assistance, the State Department is advising caution. 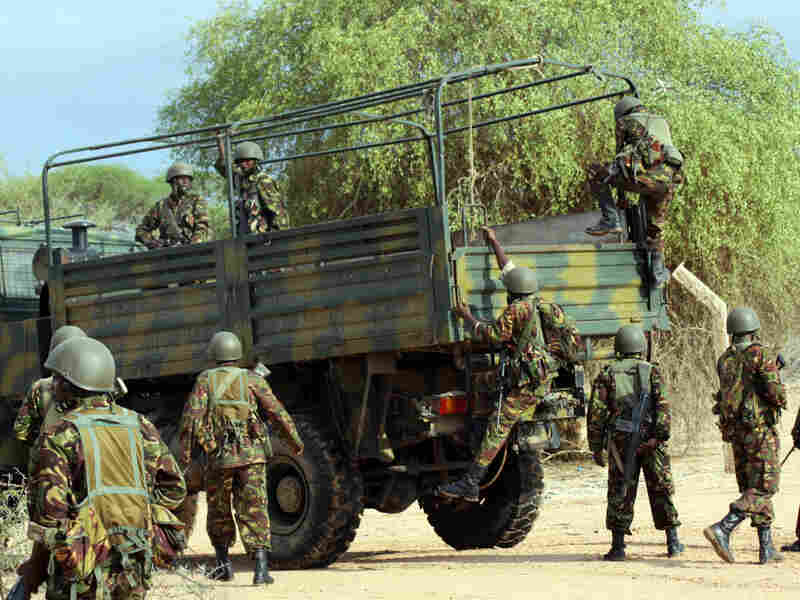 Kenyan soldiers climb into a truck as they prepare to advance near Liboi in Somalia on Oct. 18. Kenya now has a few thousand troops in the lawless country, trying to pursue a militant Islamist group called al-Shabab. AFP/Getty Images hide caption 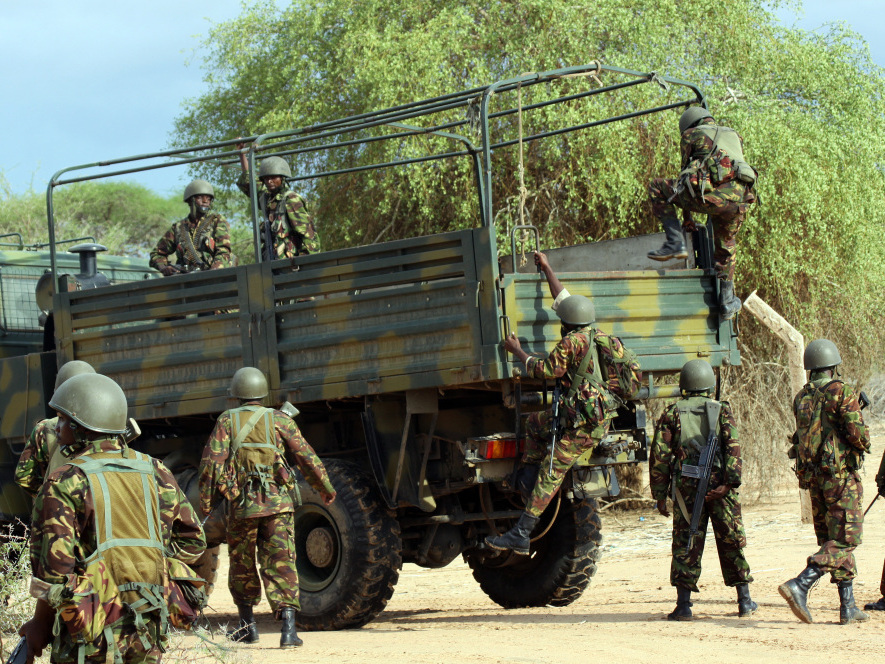 Kenyan soldiers climb into a truck as they prepare to advance near Liboi in Somalia on Oct. 18. Kenya now has a few thousand troops in the lawless country, trying to pursue a militant Islamist group called al-Shabab.

Kenya is deciding whether to send thousands more troops into Somalia — this time to join African Union forces that are propping up a transitional government in Mogadishu.

Kenya already has a few thousand troops in the lawless country, trying to pursue a militant Islamist group called al-Shabab. That month-old incursion caught the United States and others off guard and has raised alarms among aid groups.

"We surprised ourselves," says Kenya's ambassador to the United Nations, Macharia Kamau. "We have never in our history engaged in any kind of foreign adventure of a military sort. But I think what it is, is that matters did come to a head."

Tens of thousands of Somalis have been pouring into Kenya — fleeing famine and instability at home. The al-Shabab militia, which controls much of south-central Somalia, has carried out repeated terrorist attacks and kidnappings inside Kenya.

"When you are dealing with a violent group of murderous individuals, you have to come to a point where you make a decision: Do you continue to allow the slow bleed to happen, so that the country becomes completely anemic and unable to function, or do you, after 25 years of living next to a failed state, make a decision that you can no longer afford to tolerate the situation?" Kamau says.

Though critics see Kenya's military actions as misguided and uncoordinated, Kamau says Kenya is working with Somalia's transitional government to secure Kenya's borders and go after the al-Shabab militia. The ambassador came to Washington this week to seek U.S. help.

"We would love to have the United States engage, provide the logistics support, intelligence, maybe even in combat form," he says. "They don't need to put troops on the ground, no boots on the ground — we can do that. But we are also looking for other countries — Ethiopia, Djibouti — to step up their game so that they are able to help us secure the peace in Somalia. This is about saving Somalia. It's not about just the pursuit of Kenya's objectives."

The U.S. Is Watching

"You don't know what the consequences are going to be," he says. "Look at the Ethiopian incursion into Somalia, look at our own personal history. It's fraught with a lot of problems and dangers. The Somalis just do not like foreigners in their area."

Yamamoto says Kenya's motivations were understandable, but the U.S. has tried to keep focused on beefing up the African Union forces, supporting a transitional government and reaching out to major clans.

"The overall issue and solution to the Somalia problem is going to have to be a regional, concerted approach, [an] international approach, but also ultimately the Somalis themselves will have to resolve this," Yamamoto says.

One British diplomat told NPR that countries ought to help Kenya come up with an exit strategy. There are fears that its incursion could make it harder for aid workers to reach famine victims.

The Africa director of the United Nations' refugee agency, George Okoth-Obbo, points to one ominous sign: The flow of refugees into Kenya has fallen drastically — perhaps because Somalis are trapped by the fighting.

Okoth-Obbo says Kenyans are doing more to provide security at a massive refugee camp — but aid groups have had to scale back their work after a kidnapping there last month.