Accessibility links
U.S. Strategy On Afghanistan Hinges On Pakistan A virulent Pakistan-based militant group, known as the Haqqani network, has carried out a recent series of high-profile attacks in Afghanistan that may undermine U.S. plans to withdraw from that country. Now, the U.S. is seeking assistance from Pakistan, which has proved an unreliable ally. 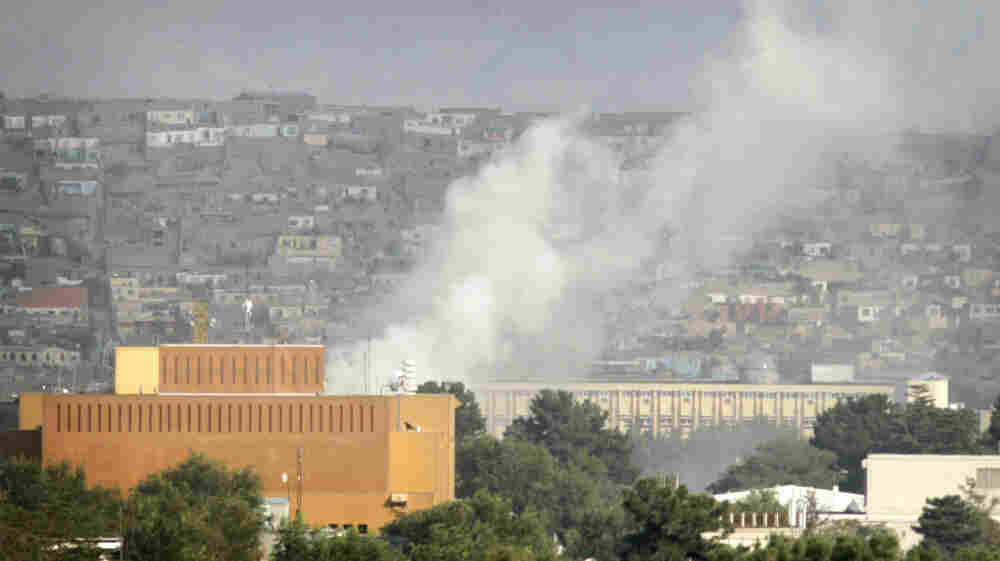 The Pakistan-based Haqqani network has been blamed for a series of high-profile attacks including this one on Sept. 13 in Kabul. Insurgents fired rocket-propelled grenades and assault rifles at the U.S. Embassy, NATO headquarters and other buildings in the heart of the Afghan capital. Ahmad Nazar/AP hide caption 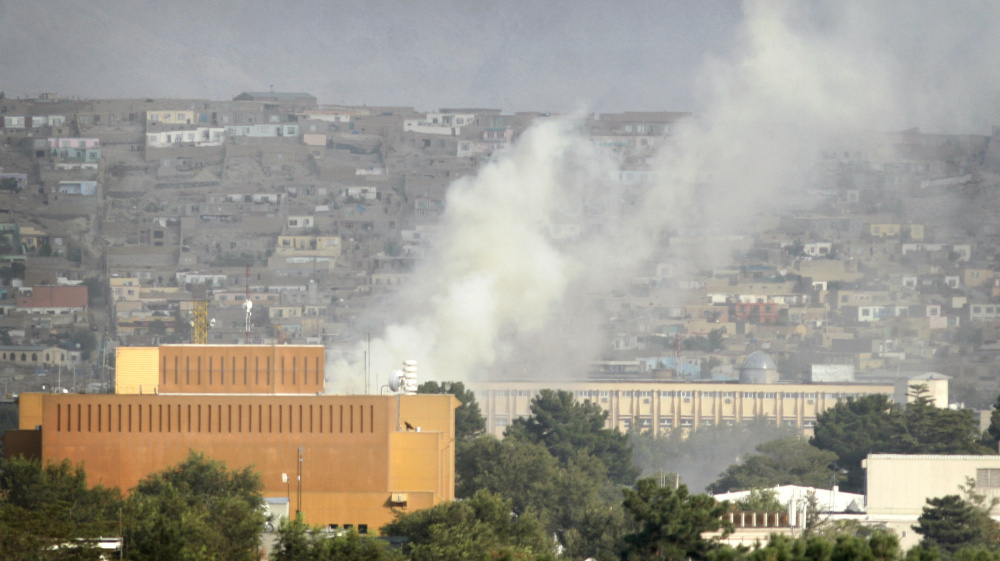 The Pakistan-based Haqqani network has been blamed for a series of high-profile attacks including this one on Sept. 13 in Kabul. Insurgents fired rocket-propelled grenades and assault rifles at the U.S. Embassy, NATO headquarters and other buildings in the heart of the Afghan capital.

As the drawdown of American combat troops in Afghanistan nears, the U.S. is facing an increasingly dangerous opponent. The Pakistan-based Haqqani network, allied with the Taliban, is believed to be behind a recent string of deadly attacks in Afghanistan, and it's forcing the U.S. to rethink an earlier strategy for stabilizing the country.

But the strategy hinges on help and cooperation from Pakistan — which is never a sure thing.

In the early afternoon of Sept. 13, the heavily fortified U.S. Embassy in the center of Kabul, the Afghan capital, came under attack. For hours, insurgents firing guns and rocket-propelled grenades were able to hold off Western and Afghan security forces.

The audacious assault was just one of several high-profile attacks blamed on the Haqqani network. The militant group has existed for more than three decades — and actually worked with the United States during the Soviet occupation of Afghanistan. Now, it has become one of America's most virulent foes, capable of undermining U.S. plans for Afghanistan. 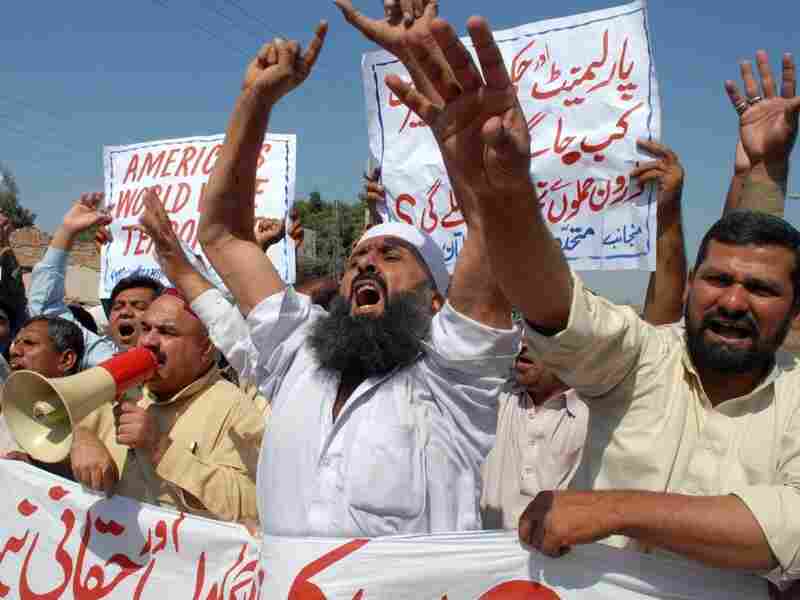 Pakistani protesters shout slogans during a protest in Multan on Oct. 14 against U.S. drone attacks in Pakistani tribal areas. Officials said U.S. drone strikes on Oct. 13 killed 10 militants, including a senior commander in the Haqqani network. Drone attacks are one way the U.S. hopes to squeeze the Haqqani militants. AFP/Getty Images hide caption 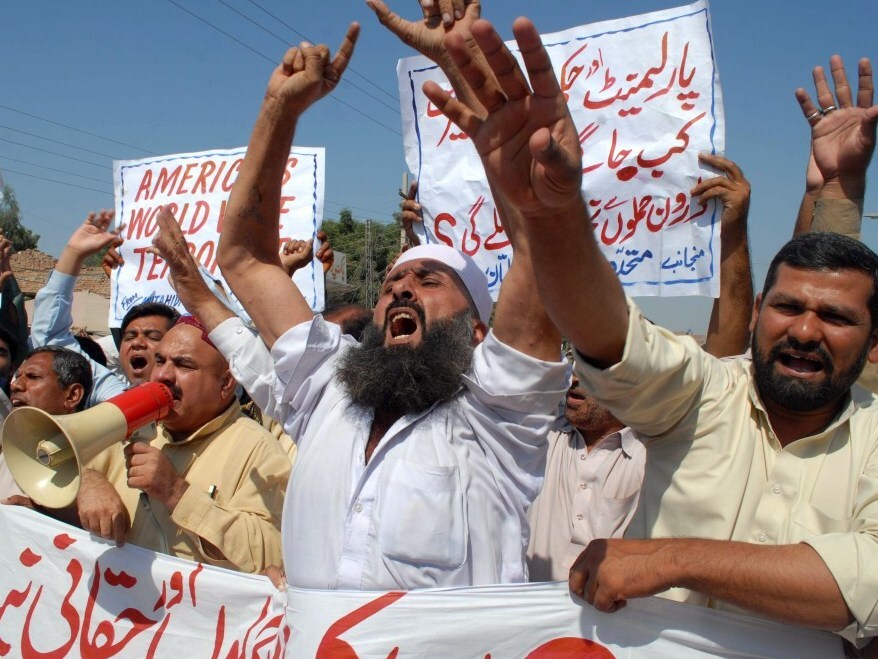 Pakistani protesters shout slogans during a protest in Multan on Oct. 14 against U.S. drone attacks in Pakistani tribal areas. Officials said U.S. drone strikes on Oct. 13 killed 10 militants, including a senior commander in the Haqqani network. Drone attacks are one way the U.S. hopes to squeeze the Haqqani militants.

During her recent swing through the region, Secretary of State Hillary Clinton pointed specifically to the Haqqani network when she laid out the U.S. strategy, called "Fight, Talk, Build." Brian Katulis, a senior fellow at the Center for American Progress, says it's not really a new strategy.

"They've put a label on that which the United States has been trying to do quietly behind the scenes. I actually think it's a type of diplomacy combined with targeted coercive measures to try to actually hammer out a sustainable peace agreement, but I think it'll take years," Katulis says.

Clinton described those coercive measures as "squeezing" the Haqqanis. The U.S. has already been hunting and killing Haqqani and Taliban militants in Pakistan with drones. It's also pressing Islamabad to arrest or kill suspected militants hiding out in the country's tribal areas.

But getting that help is the sticking point to the "Fight, Talk, Build" strategy. Pakistan has been publicly accused by the U.S. of providing support to the Haqqanis and other Islamist groups and providing safe haven for them. Clinton said that has to change.

"We intend to push the Pakistanis very hard as to what they are willing and able to do with us and the international community to remove the safe havens and the continuing threats across the border to Afghanistan," she said.

U.S. officials say they want Islamabad to "turn off the spigot" of funding and support for the Haqqanis and other groups. The U.S. is no longer asking Pakistan to launch another enormous military operation to clear out insurgents as it did a couple years ago in the Swat Valley. Instead, the U.S. is looking for targeted hits and shared intelligence.

Shamila Chaudhary, an analyst at the Eurasia Group, was, until recently, the director for Pakistan at the U.S. National Security Council. She says it's not completely clear what the Pakistanis can or cannot deliver.

"The Pakistanis are holding their cards very close to their chest and many of those cards may well be blank. And I think they're feeling extremely vulnerable, so vulnerable that they don't actually want to play any of those cards — they're trying to hold them as long as they can," she says.

Chaudhary says that holds true for any reconciliation efforts as well — whether Pakistan can bring militants to the table or prevent them from showing up. The U.S. has shown it is willing to meet: Clinton divulged that there was a meeting this summer between U.S. officials and members of the Haqqani network.

Michael Semple, a fellow at the Carr Center for Human Rights Policy at Harvard's Kennedy School, says he is encouraged the U.S. is willing to talk.

"It's good that they're prepared to stomach dealing with some fairly difficult actors; obviously dealing with the Taliban, the Haqqanis, it's no joke — these are very difficult actors. But sometimes one is obliged to do this kind of thing to get the right results. The real question marks I have is whether they're going to be able to sustain the effort long enough to see the results," Semple says.

The Eurasia Group's Chaudhary agrees with that assessment.

"I think that within the administration itself, there's still significant debate over whether reconciliation is the right way to go," Chaudhary says. "Some parts of the government still see the Taliban as a group that can't be negotiated with, while others see it as the U.S. having no choice."

And, Chaudhary says, those mixed messages are confusing all the players, including Pakistan's leadership and the Haqqani network.