Accessibility links
Young, Gay And Homeless: Fighting For Resources In New York City, nearly 4,000 young people are homeless every night — and a good number of them identify as gay, bisexual or transgender. But there are only 250 beds for them, which angers some advocates. 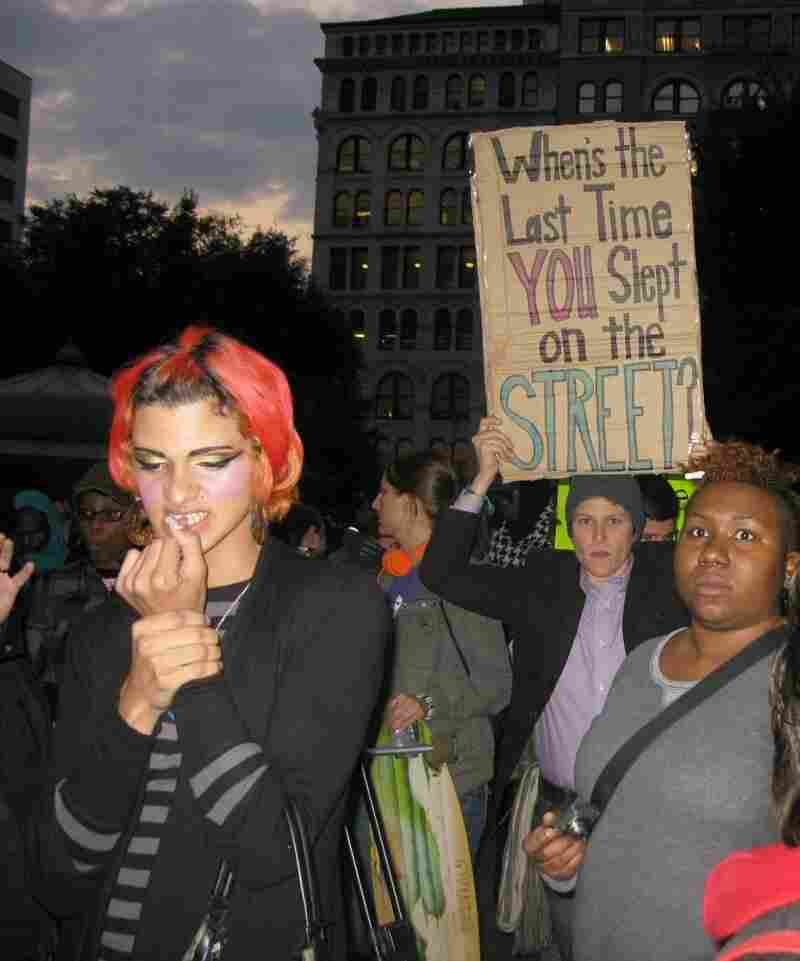 A number of studies of homeless youth in big cities put forth a startling statistic: Depending on the study, somewhere between 30 and 40 percent of homeless youths identify as lesbian, gay, bisexual or transgender.

It's largely because gay youths are more often kicked out of their homes than straight youths. And even if they are not kicked out, they may feel so uncomfortable that they leave.

In New York City, nearly 4,000 young people are homeless every night — many of them gay.

Reaching Out To Homeless Youths

On the Christopher Street pier in Greenwich Village, where dozens of gay and transgender youths hang out, Carter Seabron and Elena Wood of Safe Horizon's Streetwork Project hand out snacks, condoms and information. The organization sends out several nightly teams to find homeless youths.

"Would you like a snack?" Seabron and Wood ask. Oreos, Rice Krispies treats and chewy bars are the favorites. They also give out information about Streetwork's drop-in centers, where young people can get showers, clothing and housing referrals.

Wood says not all of them are thrown out of their homes, although many are. 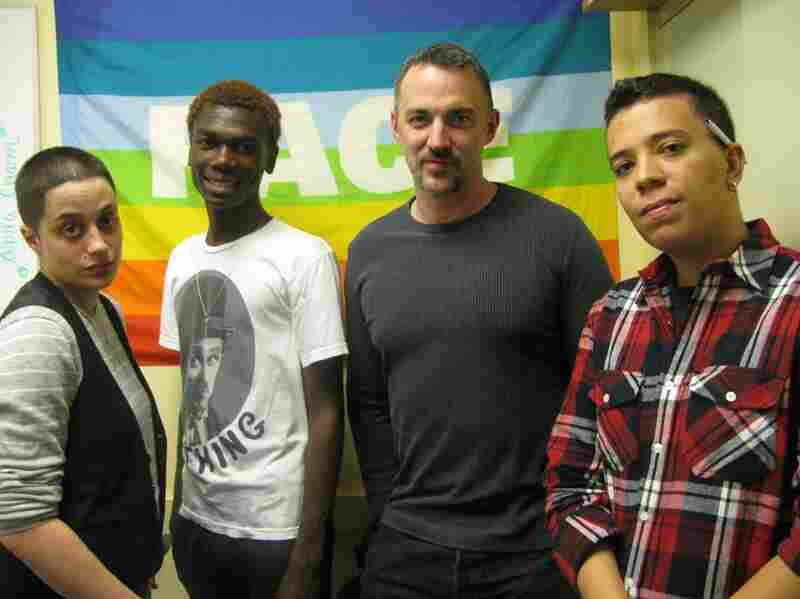 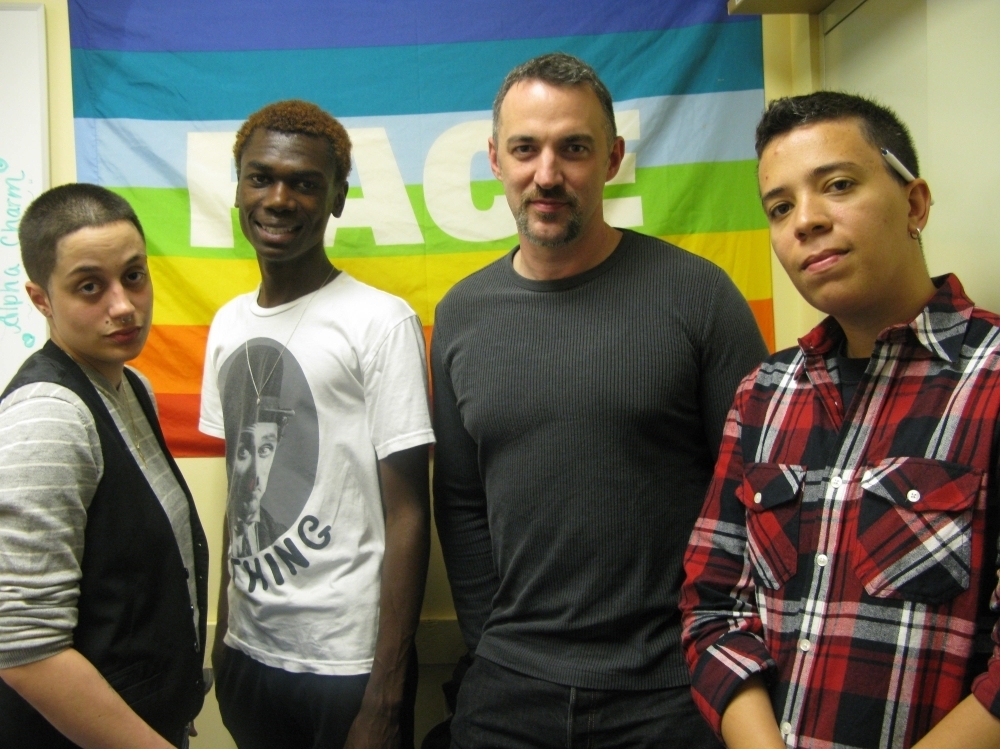 "The parent might not say, 'You have to get out now,' like, 'I am kicking you out,' especially since that is illegal if they are under 18," she says. "It's a fine line between what is their choice and what is not."

Each homeless young person has a different story.

Jeremiah Beaverly grew up in Wisconsin and Illinois.

"The day after my 18th birthday this year, my adopted parent kicked me out," he says. "At the time, I was really infatuated with this guy, and she was listening to my phone calls. She started telling my family, 'He is this, he is that, he is gay,' and talking about me as if I wasn't part of the family."

Beaverly was lucky — he had friends whose parents were more accepting. He stayed with them until he finished high school. Now, in New York City, he is in emergency housing — only available for 90 days.

"I went from shelters and couch-surfing to my own bed," he says. "I haven't slept in my own bed for almost a year, so it is really nice."

'Living In A Societal Moment'

There are three organizations that cater to homeless gay kids in New York City.

Carl Siciliano is the founder and executive director of the Ali Forney Center, which he describes as the nation's largest organization dedicated to homeless LGBT youth. When he started the center almost 10 years ago, he says, "kids were dying in the streets; there was no shelter for gay youth; every couple of months, I would know someone who was murdered in the streets."

It has become clear to me that we are living in a societal moment, where kids are coming out at younger and younger ages, and there are so many parents who can't be parents to their gay kids.

In the beginning, Siciliano's goal was just keeping kids safe. But as the years have gone on, he says, "it has become clear to me that we are living in a societal moment, where kids are coming out at younger and younger ages, and there are so many parents who can't be parents to their gay kids. They can't cope, they can't deal with it, their religion is in conflict with the reality of their kids' lives, and these kids are getting thrown away."

It makes sense if you think about it. Kids growing up today see gay people on television. They read about gay marriage in several states. If they think they are gay, they think they can come out of the closet at a younger age.

Tiffany Cocco grew up in East Harlem. She dropped out of school, did some drugs, was kicked out by her parents. She is now 23 and on a waiting list for housing. She's been homeless since she was in her teens. She says she has slept at friends' houses, couch-surfing, among other places.

"I lived on the streets," she says. "Literally, the A Train was my best ride: Waking up to the sunrise, gorgeous. I slept on stoops, park benches — then, finally, shelters."

Siciliano says the gay rights movement has not been good about dealing with the issue of homeless gay youth.

"The movement was articulated and thought out at a time when it was almost all adults coming out," he says. "We have framed our fight for equality in adult terms, and almost all the victories we have won only really benefit the adults in our community."

He also says the gay community hasn't really dealt with poverty and destitution.

A Fight For Resources

Siciliano attended a recent rally in Union Square for gay homeless youths. A crowd of several hundred people chanted, "They're our kids; they're our kids."

At the microphone, Siciliano says it's a different kind of struggle to protect gay kids than the battles the movement has fought in the past.

"With adults, it's a fight for laws like marriage equality," he says. "It is not so much laws with the kids; it is economics. It's a fight for resources. That's what our community hasn't quite gotten yet; we have to fight for resources to protect our kids. How dare we say 'it gets better' to the kids if we are not willing to fight to make sure they have what they need."

There are only 250 beds for 3,800 homeless kids in New York City; waiting lists are huge. Facing a $10 billion deficit, Gov. Andrew Cuomo made compromises with the New York state Legislature. Budget cuts would have taken 100 of those beds away. The city council restored monies cut from both the city and state budgets, so no beds have been cut. A spokesperson said Cuomo asked all local governments to take more responsibility for their budgets by eliminating waste and prioritizing vital programs.

But Siciliano is still angry that homeless kids are not a priority. Of the governor, whom Siciliano describes as heroic in regard to gay marriage, he says, "It's tearing my heart in two. Here you have a political leader who is doing so much to help the adults of our community and is taking actions that harm and imperil the most vulnerable youth of our community. What do we do? What is our response to that?"

Siciliano hopes the rally in late October is the beginning of a real campaign for youth shelter. They're calling for 100 more beds for homeless youth each year until the need is met. But homeless kids don't have power, money or votes. It's hard to believe they will be at the top of many politicians' list in future city and state budgets.