Accessibility links
In Baltimore, Mapping The World Of Addiction Researchers in Baltimore are tracking the way the character of a neighborhood — its violence, its vacant houses, its appearance of obvious drug use — can affect an addict's decision to use drugs. 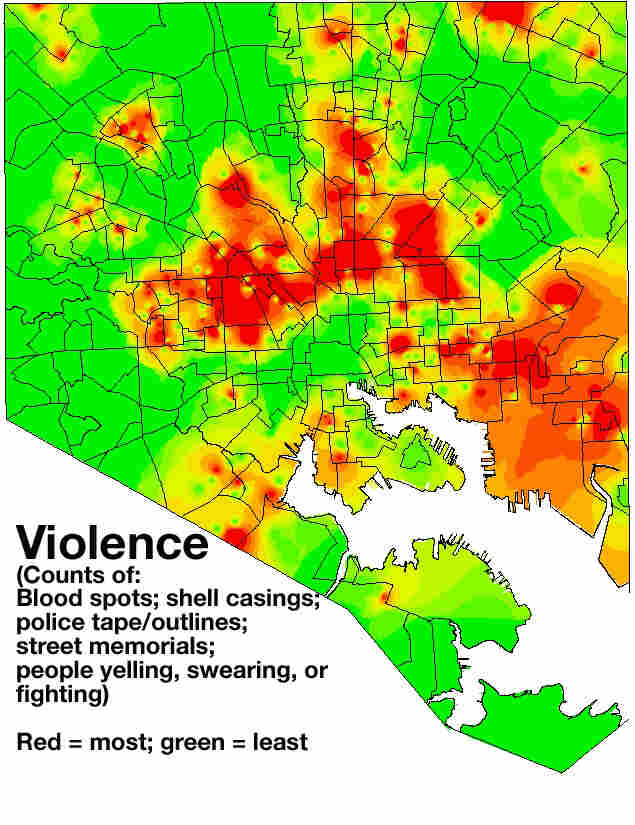 Addicts' movements around Baltimore are mapped onto images like this, showing levels of violence in each neighborhood. Other maps track things like visible drug use and vacant housing — all factors that may contribute to an addict's decision to use drugs. Dr. Debra Furr-Holden/Johns Hopkins School of Public Health hide caption

In East Baltimore, not far from rows of abandoned homes and empty warehouses, there's a space-age high rise housing an unusual methadone clinic.

"People come here and participate in studies, and in return they get treatment," Dr. Kenzie Preston tells Laura Sullivan, host of weekends on All Things Considered.

The lab is part of the National Institutes of Health. Preston, who heads research at the lab, and her colleagues provide methadone and drug testing to addicts who come here. Unlike other rehab programs, addicts don't get thrown out if they relapse. That's because researchers want to study those relapses and what makes them happen.

Preston says the 80 participants in her current study carry something very important: a smartphone that's programmed to let them track when they crave drugs, and when they use.

The phones are also set to beep randomly three times a day, and ask a series of questions: Where are you? What are you doing? How are you feeling?

The phones are partially disabled to reduce their street value, but associate scientist David Epstein says they don't have a problem with phones being lost or stolen.

"We tell them, if you lose or break one of these, we'll replace it and that's fine," he says. "But if you lose or break a second one, we're going to detox you from the methadone and you can't be in the study anymore. And we hardly ever have to do that. People know that they'd rather stay with us."

The point of the study is to understand why, at the precise moment, an addict decides to use. Epstein says if you ask someone about a relapse after the fact, he or she is going to have trouble recalling it accurately.

"People, whether it's someone who's addicted to drugs or anyone else in the world, make up stories that sort of explain their behavior," he says. "But if you could've been monitoring them in real time, you would see that things didn't happen quite the way they remembered."

Epstein says it's not lying, it's just the way the brain works. The smartphones enable researchers to capture that data in real time.

There's another component to the study: Along with the smartphones, addicts carry GPS loggers, about the size of a pager, that track their movements.

That means Epstein and his colleagues can follow on a map as an addict is sober for weeks, but one day after visiting a particular house or block, that person breaks down and relapses.

Knowing where addicts are when they use — or even when they're just thinking about using — gives researchers information about the kinds of places that make addicts want to use drugs. That's where Dr. Debra Furr-Holden comes in.

She's the head of the Drug Investigations, Violence and Environmental Studies lab at Johns Hopkins University. She and her team canvass Baltimore, block by block, looking for clues — such as discarded vial caps — about the character of each neighborhood.

"Oftentimes when people purchase heroin, they will flip the cap off the top between where they purchase and where they're using," she says. "And then we consider those to be the bread crumbs."

Abandoned houses, makeshift memorials to murder victims, visible evidence of drug use — these are all things Furr-Holden catalogues. Then, she turns that data into maps of Baltimore's neighborhoods.

Combining Furr-Holden's maps with the GPS data about addicts' movements could produce unique insights into how those neighborhoods affect people moving through them.

And, says Epstein, it could lead to new treatments, possibly using the smartphones.

"A sort of clinician in your pocket," he says. "You can give them on the spot feedback... and that does seem helpful."

For example, if an addict reports that he's in a high drug-use neighborhood and feeling stressed, the smart phone can flash a reassuring message: Most cravings only last 20 minutes. Hang in there.