Accessibility links
GOP Hopefuls Open Up In Bid For Christian Vote Six of the presidential candidates gathered in Des Moines, Iowa, on Saturday for a roundtable discussion. The event, sponsored by the state's leading conservative Christian political force, did not touch on the economy, and at times had an emotional and confessional tone. 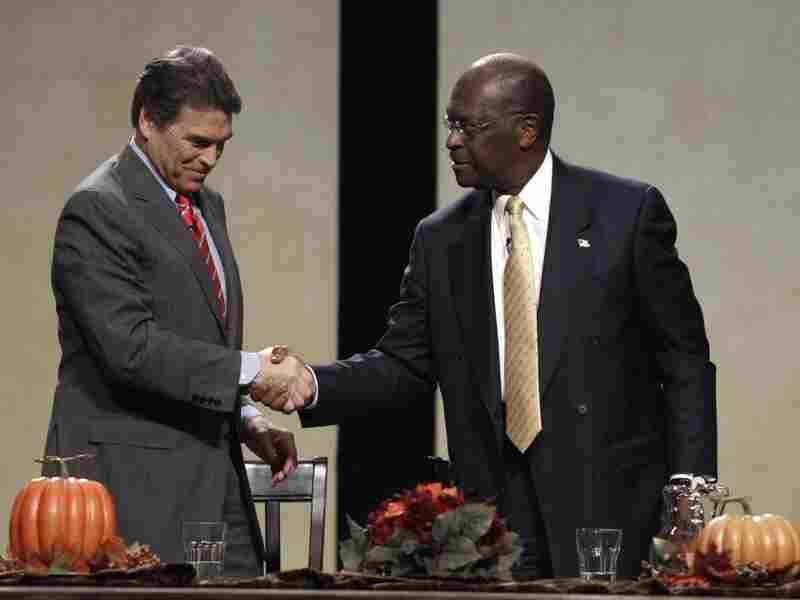 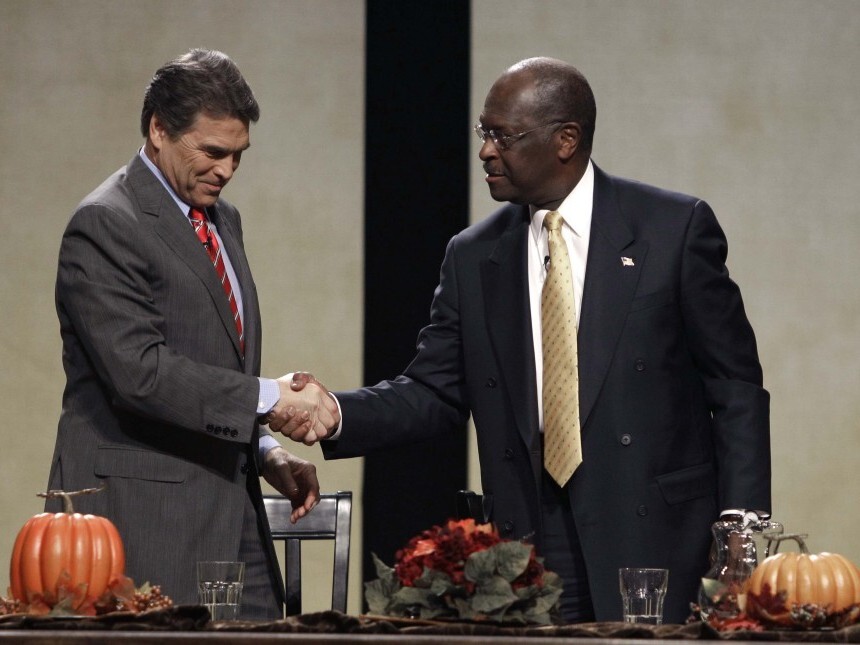 Six Republican presidential hopefuls gathered in Des Moines, Iowa, Saturday, and each made a pitch for the state's very important Christian conservative vote.

The event was not a debate, but a roundtable discussion. The candidates sat side-by-side at what was described as a Thanksgiving table, complete with pumpkins and autumn leaves. Not present at the table was former Massachusetts Gov. Mitt Romney, who chose not to attend.

Each told personal stories about how faith helped them through difficult times. There was no talk of the economy, but social policy did reveal some division during an event that mostly showed agreement among the candidates.

The event was sponsored by the leading conservative Christian political force in the state of Iowa, an organization called The Family Leader.

"Ladies and gentlemen, we want to have a movement that transforms this culture to biblical and constitutional worldview with elected leaders who adhere to the foundations and lead like they know what the foundation of this country is all about," said Family Leader president Bob Vander Plaats.

The moderator, political consultant and pollster Frank Luntz, started the discussion by asking the six candidates to think about the oath of office.

"At the end of that oath are the words, 'So help me God.' When you hear those four words, if you have the privilege to say them, what will come to mind?" he asked.

Texas Gov. Rick Perry's answer was one of several Saturday that appeared deeply emotional for those on stage.

"'So help me God' is almost a plea. It's not part of an oath," Perry said. "I look at it as a plea. I've been driven to my knees multiple times as the governor of the state of Texas, making decisions that are life and death, that have huge impacts on people's lives."

There was, at times, a confessional tone to the proceedings, as when the candidates were asked about things they've sought forgiveness for. Businessman Herman Cain spoke of how his commitment to his business career meant he didn't spend enough time with his family. He too choked up as he spoke.

"I didn't believe that I was home enough when my kids were growing up," he said.

Then it was Newt Gingrich's turn. He has been married three times, and has acknowledged extra-marital affairs in the past. He mentioned none of that specifically, but he did offer something when asked about personal failings.

"I've been very, very fortunate and very blessed. Callista and I have a wonderful marriage, and we're very close to our two daughters, Kathy and Jackie, and their husbands, and I'm extremely close to Maggie and Robbie, who are my two grandchildren," he said. "But all of that has required a great deal of pain, some of which I have caused others, which I regret deeply."

Policy was also discussed. Same-sex marriage and abortion were prominent. Rep. Michele Bachmann criticized the judicial system and the courts.

"They're not the lawmakers. It's the Congress that are the lawmakers. ... I will get behind legislation in the Congress, and I will also get behind the Federal Marriage Amendment," she said. "I will do whatever it takes because the first and foremost unit of government in this nation is the family, and the family is defined as one man, one woman. No other definition will do."

On the question of whether states should be prevented from acting on their own to allow same-sex marriage and abortion, Rep. Ron Paul was the only one to offer words of caution about going too far.

"I would prefer, under our system of laws, that all of these problems be taken care of in a constitutional manner, which I would defer to the states," he said. "I think the reason we fight and fume over this is because we have too much government everywhere."

Apart from that, agreement dominated, making it hard for any one of the six to consolidate the Christian conservative vote.

As for Romney, one audience member said it was like a family member deciding to stay away from Thanksgiving dinner.