Accessibility links
For Muppeteers, It Isn't Easy Being Invisible With a new Muppets movie on its way to theaters, NPR's Susan Stamberg goes on set with felt-wrangler Bill Barretta and director James Bobin to find out what's new — and what techniques never change. 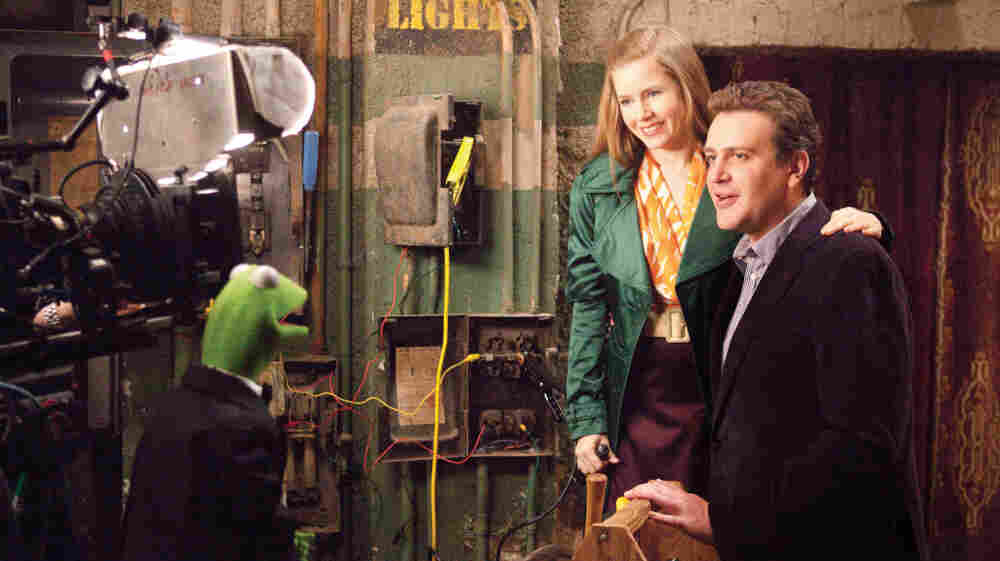 Anchorphibian: Kermit the Frog does the backstage-chat thing with Amy Adams and Jason Segel in The Muppets. Scott Garfield/Disney hide caption 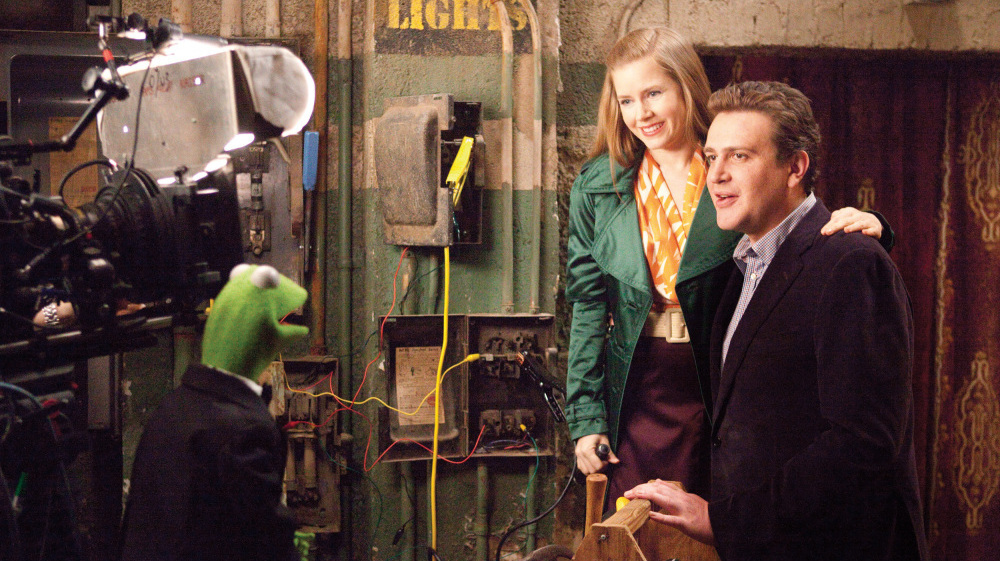 Anchorphibian: Kermit the Frog does the backstage-chat thing with Amy Adams and Jason Segel in The Muppets.

Sound Stage 28 at Universal Studios in Burbank, Calif., looks like any other Hollywood set — littered with wires, crew members everywhere. We pick our way through cables and cameras and stuff that would make Oscar the Grouch's trash can look tidy.

But then we head up — up a flight of wooden stairs that leads to the old set of the 1925 Lon Chaney silent film The Phantom of the Opera. It's draped with dusty red-velvet swags, and it looks like it might still harbor a ghost or two.

This is where, for the first Muppet movie since 1999's Muppets in Space, a Hollywood crew has re-created the old Muppet Theatre — which, in the new film, is being threatened with demolition by a tycoon who wants to drill for oil.

We've come on a day when director James Bobin, co-creator of the HBO musical comedy Flight of the Conchords, is shooting a scene in a cramped balcony box overlooking the Muppet Theatre stage.

Below, a few puppets hang limply from various stands as their puppeteers ready themselves for action. Muppet captain Bill Barretta is in charge — checking sightlines, positioning monitors, tweaking costumes.

Barretta also performs: He's the man behind several characters previously enacted by the late Jim Henson, including the Swedish Chef, Rowlf the Dog and Dr. Teeth. He performs some newer characters, too — not least Pepe, the little Spanish-speaking shrimp.

Barretta says his wife's Spanish aunt was the inspiration for Pepe.

"[She] had this great way of talking to people — she only spoke in statements," he explains. " 'Iz a black shirt, OK. Come on, Beulah, we go to the mall, OK.' That's what she said all the time: 'OK,' at the end of everything."

It happened that during a brainstorming session for a 1996 Muppets TV show, Barretta found himself describing his aunt-in-law.

"She was a little bit selfish in a way, and I said, you know, 'She's very fun but a little shellfish,' by mistake. And one of the writer-directors said, 'Wait a minute, OK, maybe it's a lobster or it's a crab or a shrimp — no wait, it's a king prawn, 'cause maybe he has a problem with size.' "

Sometimes, it takes a village to make a Muppet.

But then, collaboration is a Muppet tradition, according to Barretta.

"That was something Jim created," he says, "and I'm just glad to be part of that process."

Ad-Libs And Angles Add Up To Muppet Magic

Special guest stars show up on this shooting day, to do cameo roles for a scene in which the Muppet crew puts on a telethon to help save their imperiled theater. So, jammed into that small balcony box are Whoopi Goldberg, Judd Hirsch, Neil Patrick Harris, John Krasinski, James Carville and others. At the cry of "Action," they start ad-libbing with one another and the Muppets. 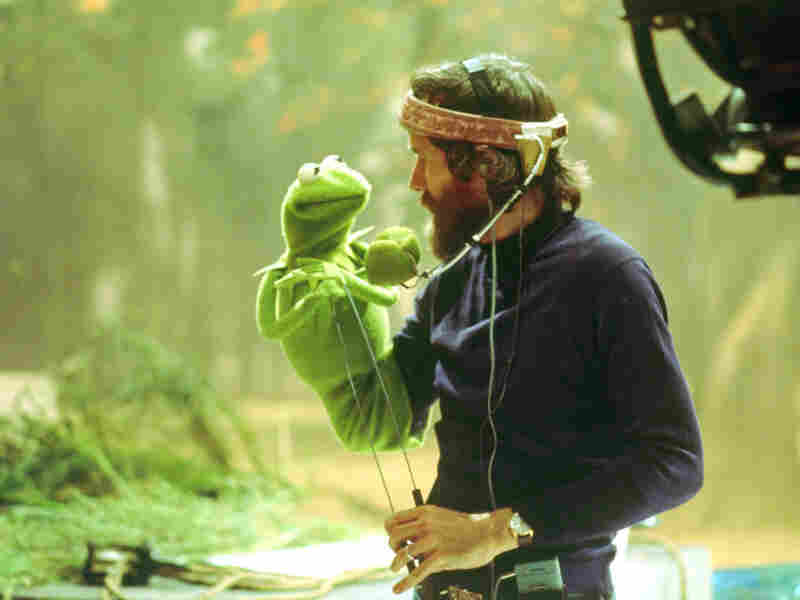 Like Muppets creator Jim Henson (with Kermit, above, in the 1970s), current Muppeteers (including Bill Barretta, below, with Pepe the Prawn) wear head-mounted microphones to capture their voice work. Disney hide caption 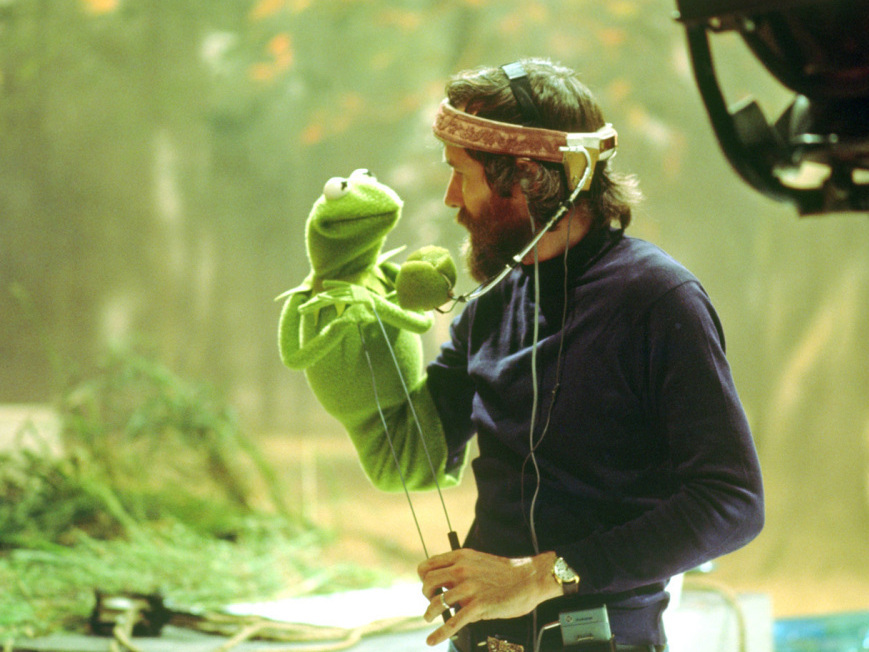 Like Muppets creator Jim Henson (with Kermit, above, in the 1970s), current Muppeteers (including Bill Barretta, below, with Pepe the Prawn) wear head-mounted microphones to capture their voice work. 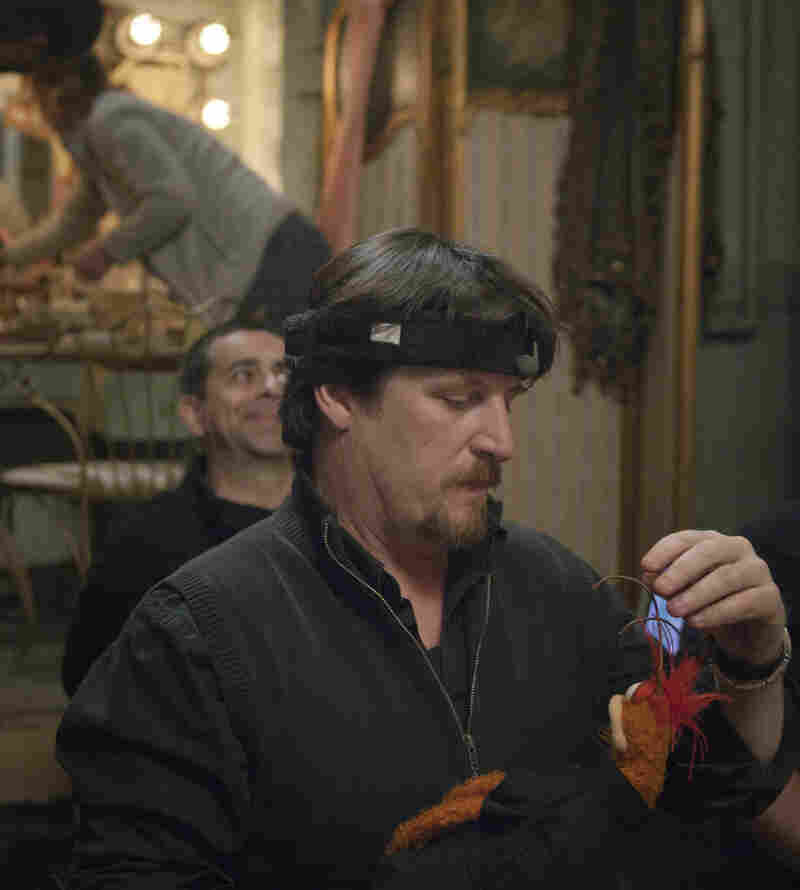 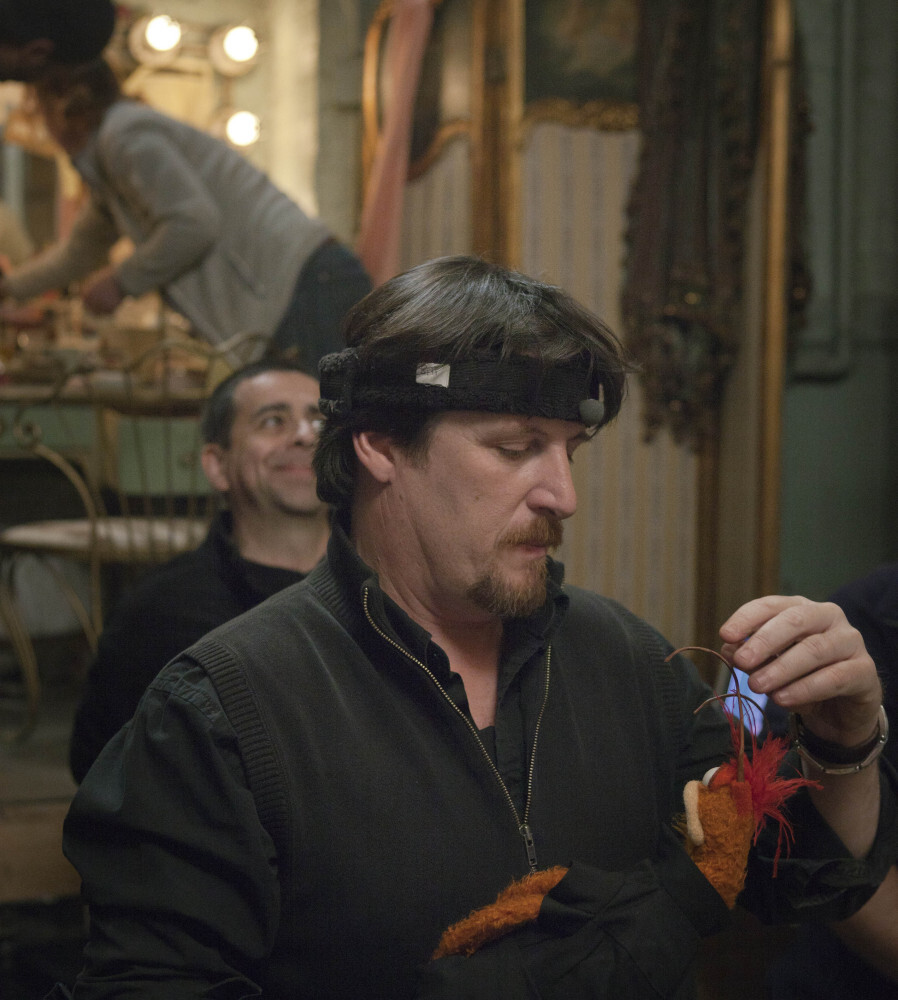 The puppeteers have to pretzel themselves in the small balcony to keep out of camera range. They sit, they squat, they belly-down under tables and ledges, sometimes using knee padding for comfort. Some sets are raised a few feet off the ground for easier Muppet maneuvering.

Working outside is trickier. For a big song-and-dance number, the filmmakers shut down Hollywood Boulevard for two days while dancers, human actors and Muppets all performed in the real world.

"We have to be down on the ground with little rolly chairs," says Barretta, "and straining, trying to get your head down below the shot. It's much more difficult to be out in the real world."

James Bobin, director of The Muppets, is making his feature-film debut. And he's a total Muppets newbie.

"No Muppet training whatsoever, " he says — although he allows that the cast of Flight of the Conchords used to watch the Muppets during downtime, just for laughs.

"Whenever I have an idea, I say, 'Bill, is that possible?' And he tells me yes or no. Normally he says yes, which is good for me. But there are obviously limitations using Muppets: Door handles are a nightmare — the wrong height. Windowsills are a no-no. ... They're hand puppets, so ... they often have no legs. Shh, whisper it quietly. Don't tell people that."

You'd think, in this age of computer-generated special effects, they could make some Muppet legs. But Bobin says not so: "This is very much a puppet festival. It's all about felt and fur and seeing that for real, not computer graphics."