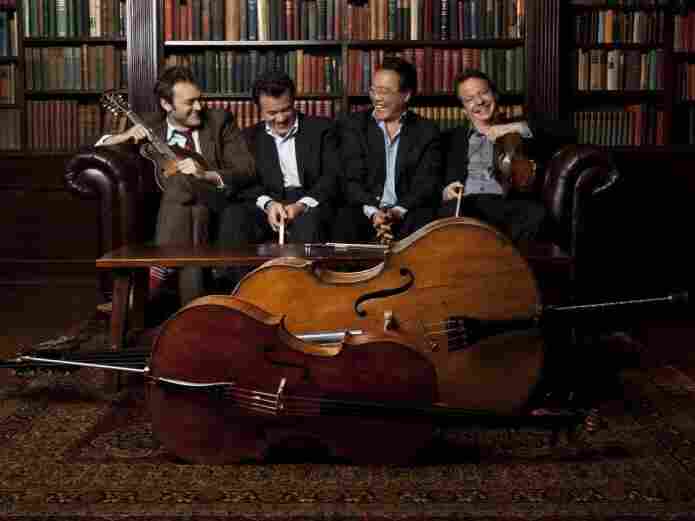 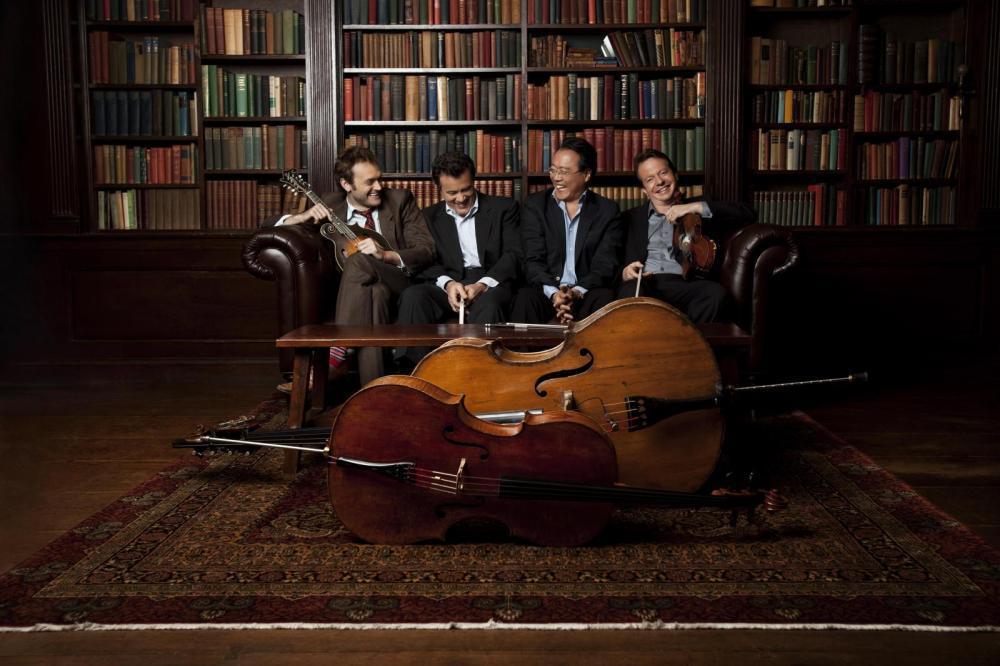 A sense of humor comes through The Goat Rodeo Sessions, the latest Americana exploration for the world-renowned cellist Yo-Yo Ma. He's joined by three other virtuosos, all in the world of bluegrass: Nashville bassist and composer Edgar Meyer, Nashville session player and fiddler Stuart Duncan and, at 30, the youngest of the bunch, mandolinist Chris Thile of Nickel Creek and Punch Brothers.

What's a "goat rodeo," you may ask? Thile says it's an aviation term "where so many things ... go wrong that you need to go right for everything to turn out not utterly disastrous."

"We kind of felt a kinship with that concept," Thile says in an interview and performance with All Things Considered host Melissa Block.

Ma says the album title, The Goat Rodeo Sessions, came about because so many of the songs' working titles had the word "rodeo" attached to them. When Thile looked up "goat rodeo" one day, he says, they thought, "Gee, that's a version of us."

"Everybody could be a leader or everybody could be a follower at various times," Ma says. "And I think the vast amounts of fun that we have — which is, for me, that's the goat rodeo part: How can we ever get any work done when we're laughing all of the time? That's actually the part that we love the most. It's a great balance between the two."

Poking A Bow In The Ear

That fun extends beyond the studio to live shows. Bows get poked into fellow members' ears during performances, while the band sometimes writes lyrics to instrumental songs that, Ma jokingly says, "you'll never, ever hear."

"Part of having fun ... I think Stuart [Duncan] said something very interesting. He said that some of the best playing that he feels he has done was when he wasn't focused on himself, on trying to get something right," Ma says. "The idea of poking a bow in someone's ear, for example, while [he's] about to do something serious actually makes him not think about the seriousness of what he's about to do, which actually releases him to do what he needs to do."

With all four musicians in a circle, The Goat Rodeo Sessions was recorded at James Taylor's barn studio in Massachusetts.

"Because we were using the overhead microphones, for a balance, we were talking about maybe the mandolin being on up risers so that it was equal with the violin as far as how close it was to the overheads," Duncan says. "Upon hearing this, James Taylor goes down in his shop and builds a five-by-five riser for Chris [Thile] to sit on. You think about one of the world's greatest finger-picking guitarists with a power saw in his hand."

"I'd like to think of it as James Taylor putting me on a pedestal," Thile says, laughing.

"That's actually an aesthetic that we want, both in the local sense of one measure or one phrase, but also in the longer sense of a year or two years," Meyer says. "You want to come out different people than when you walked in."

"We all like to go to the edge," Ma adds. "And we like to take calculated risks to go to the edge. And all of us, in some weird way, are also perfectionist[s], so the tension between the two is what we play off of each other. Therefore, the visual cues. Therefore, the tight quarters. So when somebody does something that you know is special to them or going in a different direction, we almost intuitively will follow. It's like a school of fish, you know; suddenly they will turn direction. And that's part of the thing that makes a performance or music come alive."