Accessibility links
Francis Ford Coppola Reflects On His Film Career At this year's Toronto International Film Festival, the director of Apocalypse Now and the iconic Godfather films shared memories and anecdotes with a sold-out crowd. 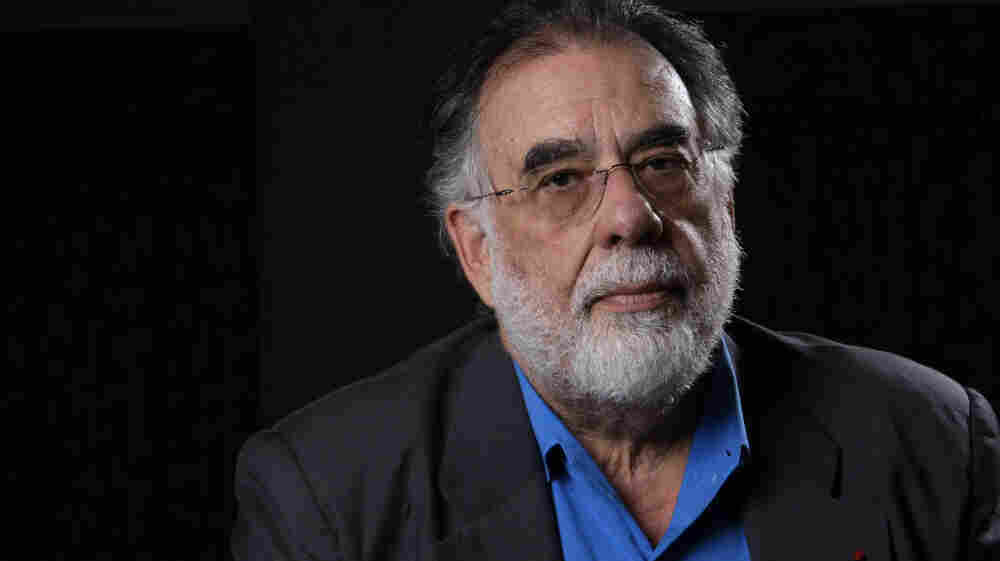 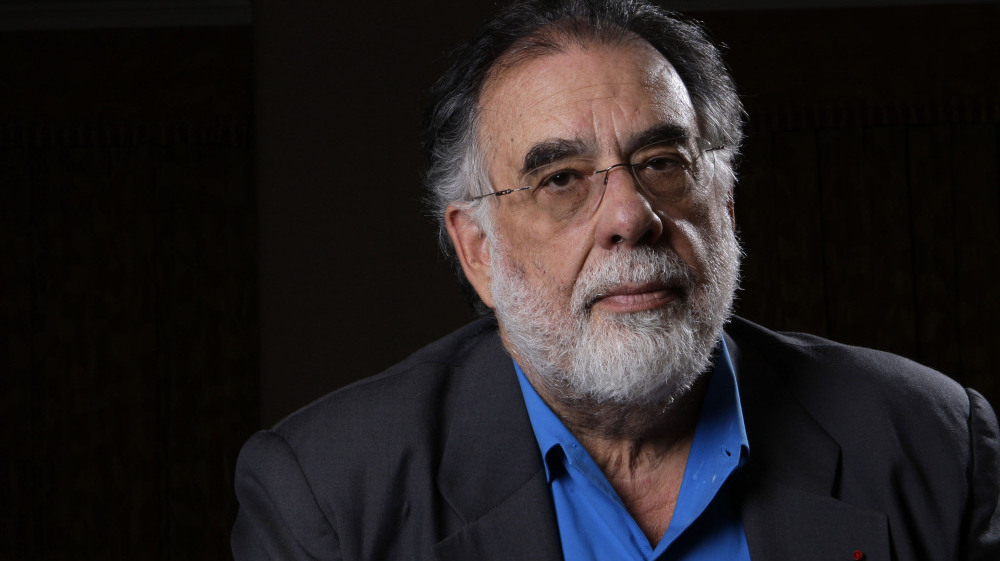 Note: In September, Francis Ford Coppola spoke to Cameron Bailey, the director of the Toronto International Film Festival, in front of a sold-out audience at TIFF's Bell Lightbox multiplex. During the discussion, Coppola also took questions from audience members about working with A-list actors, his writing process, screenwriting and rumors about another Godfather movie. Fresh Air is broadcasting excerpts from that 85-minute discussion on today's program. 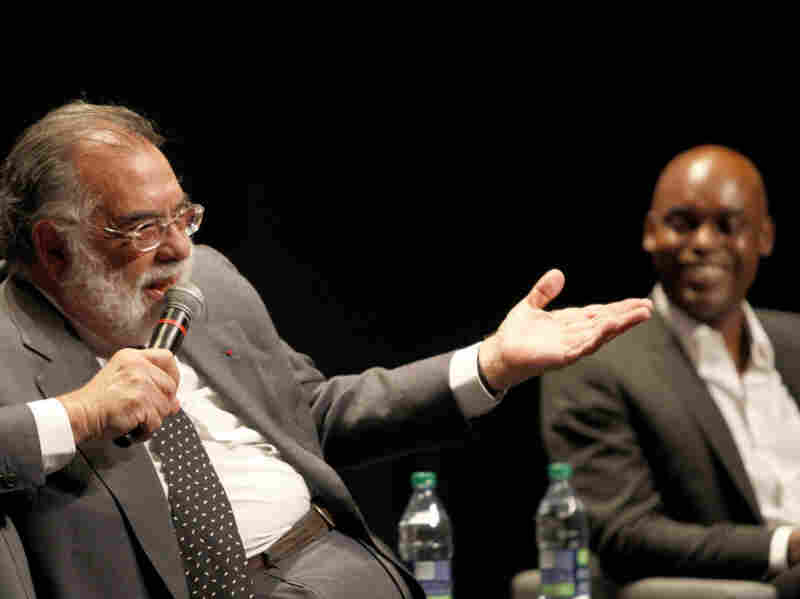 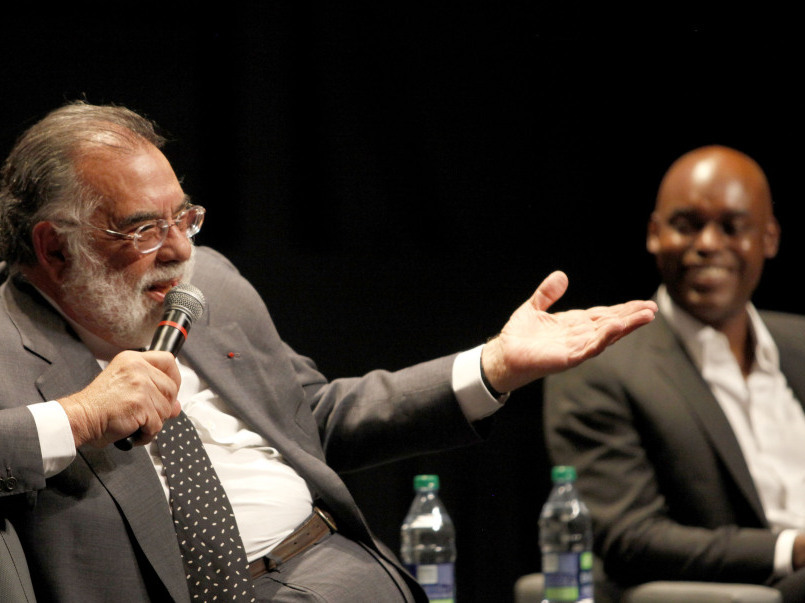 Coppola and Cameron Bailey, co-director of the Toronto International Film Festival, chat about Coppola's career during an event at this year's festival.

When Francis Ford Coppola was a young filmmaker, he wanted to make what he calls "little art films."

"I think many of my colleagues felt the same way, but [we were] involved in quite a dance," he told Bailey. "You're always doing something that will make a lot of money so that you can wake up and make the films you want to do."

Coppola, who directed The Godfather and Apocalypse Now, revealed that his earliest films — like The Rain People and The Conversation — were more like what he'd hoped to do over the course of his career. But then money and life got in the way.

"I had to get a job, and of course, the job was The Godfather," he says. "That made me be something I didn't know I was going to be. I became a big-shot director. If you take a young Long Island Italian guy and give him endless possibilities, then you'll see what kind of crazy things I did in the course of my career."

Coppola's most recent films — Tetro, Twixt and Youth Without Youth -- are much like his earliest pre-Godfather movies. That's partially because Coppola was able to finance his most recent films himself. It's a financial arrangement familiar to the award-winning director. He also financed 1979's Apocalypse Now — notorious for its troubled production period — after studios refused to get involved.

"It could have been because there hadn't been a so-called war film about [the Vietnam War], and studios were very cautious," he says. "The script for Apocalypse was considered interesting ... but nobody wanted to do it, so I thought, 'Of course, I should do it.' "

Coppola mortgaged his properties to finance the film, which took much longer to finish than he had anticipated.

"We were supposed to be [on set] less than a year, but we ended up being there two years," he says. "I was pretty scared."

And Marlon Brando, who played Kurtz in the film, was scheduled to be on set in the Philippines for just three weeks. When he showed up, his physique was not exactly what Coppola had in mind.

"He had promised me that he was going to be a little thinner," he says. "The issue was, if he was a runaway Green Beret officer — it sounds silly, but [I was thinking] what kind of uniform should he wear? They don't make size XXXXXL ... uniforms. So ... I had to dress him somehow."

Coppola suggested cutting Brando's hair off so that Brando would at least resemble the character Kurtz in Joseph Conrad's novel The Heart of Darkness. But Brando disagreed. For an entire week, the two men sat in a houseboat on set talking — but not filming — while Coppola struggled to figure out what to do.

"And on the Friday [of the first week Brando was on set], I walked in, and there was Brando sitting there with his head shaved, bald. And I said, 'But Marlon, you said it wouldn't work. You said you read Heart of Darkness and the idea for Kurtz that way wouldn't work.' And he said, 'Well, I lied. I never read it. I read it last night.' So he read it last night and came around to this image."

Coppola decided to dress Brando in black pajamas, hoping to create the appearance of a gigantic person — instead of an overweight person — on-screen.

"That's the way I got around the uniform issue," he says.