Accessibility links
Movie Review - 'Arthur Christmas' - The Brits, Doing Well By A Swell Season The Santa-industrial complex gets taken affectionately down in a witty, big-hearted holiday romp from the studio behind Chicken Run and Wallace and Gromit. 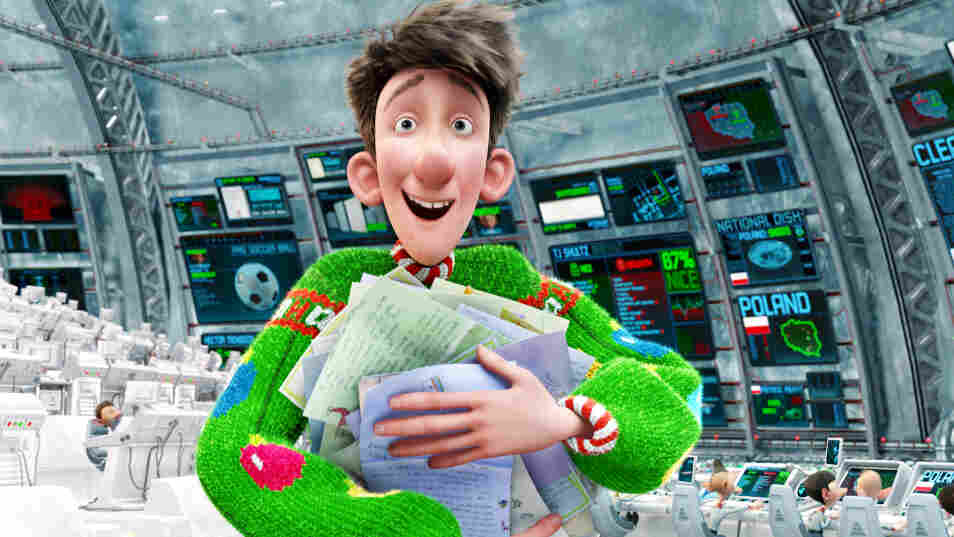 Mission (Not Quite) Accomplished: Arthur, Santa's hapless second son, rides to the rescue when one kid slips through the North Pole's system on Christmas Eve. Aardman Animations/Sony Pictures hide caption 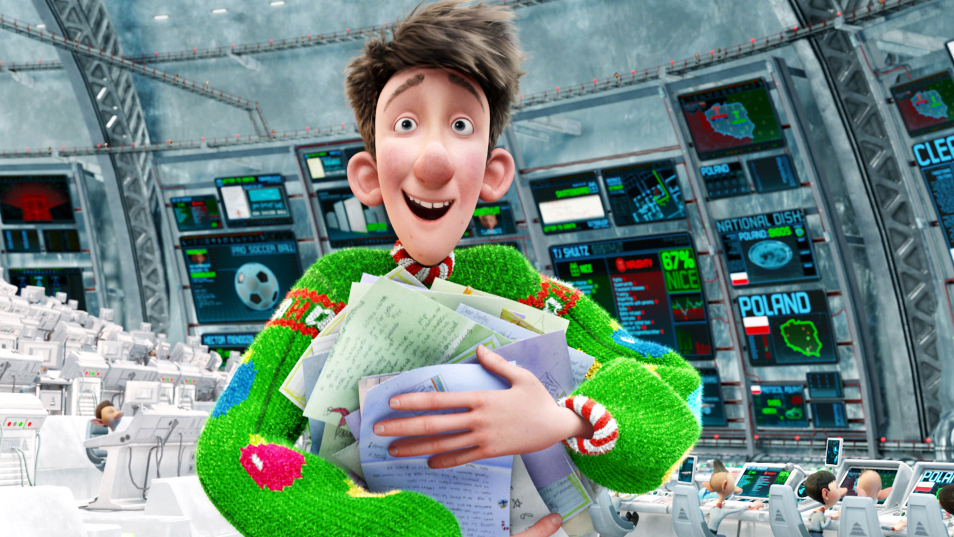 Mission (Not Quite) Accomplished: Arthur, Santa's hapless second son, rides to the rescue when one kid slips through the North Pole's system on Christmas Eve.

From 'Arthur Christmas' - 'Dear Santa, Are You Real?'

'Dear Santa, Are You Real?'

The Santa-industrial complex gets taken affectionately down in Arthur Christmas, a witty, big-hearted romp that'll put holiday audiences in mind of unpretentious animated crowd-pleasers like Cloudy With a Chance of Meatballs.

Or in mind of Chicken Run, maybe: Hailing from the U.K., and more specifically from Aardman Animations — the studio behind that cheerfully unhinged barnyard frolic, not to mention the birthplace of clay-animated cult favorites Wallace and Gromit — Arthur Christmas doesn't indulge in the quainter-than-chintz idiosyncrasies that kept the latter from finding a larger audience Stateside. (Of Wensleydale cheese references, sadly, there are none.)

But the film does have a distinctly British cheek; even with a Sony Pictures co-credit over the titles, it's just un-Hollywood enough to feel like a breath of fresh North Pole air.

It's Dec. 24, and St. Nick Inc. is in full swing: The elves are at the ready, Santa (voiced by Jim Broadbent) has suited up — but who's that barking orders in Central Command? It's Steve, Santa's strapping eldest, done up in Christmas-tree camo and sporting a goatee that looks like nothing so much as a flocked fir.

Santa himself, you see, has been on the job so long that he's half checked out, leaving the heir apparent to handle the details. (The film's mildly jaundiced vision of the Santocracy as an analogue for Britain's royal family is just one of Arthur Christmas' charms; if nothing else, it sets the table for a delicious turn from Imelda Staunton as an unflappable Queen Mum — er, Mrs. Santa.)

With Papa Claus barely going through the motions, and exponential population growth upping the ante, jut-jawed Steve (voiced by Hugh Laurie) has modernized the family business, automating the process until it's a model of sleek militaristic efficiency. Battalions of elves swarm cities Special Forces-style, rappelling down from an Independence Day-sized sleigh-ceship to carpet-bomb suburban living rooms in a mechanized cheer campaign that's coordinated down to the millisecond. It works admirably. 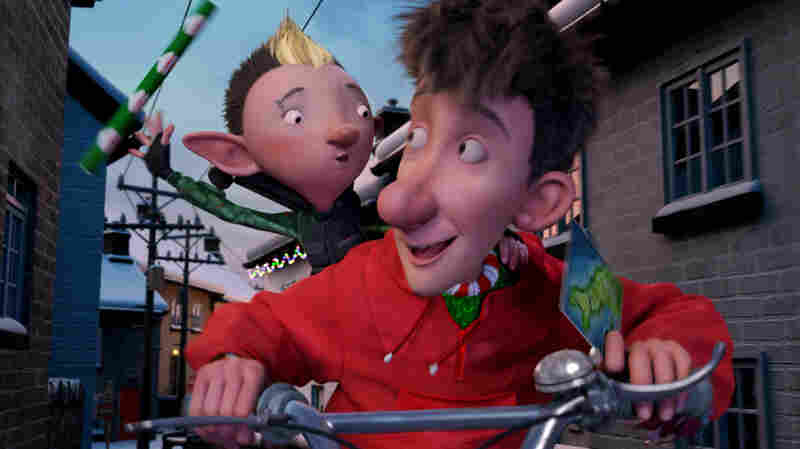 Wrap Star: Bryony the gift-wrap elf (voiced by Ashley Jensen) joins Arthur in a beat-the-clock effort to get a bike to the one girl Santa missed. Aardman Animations hide caption 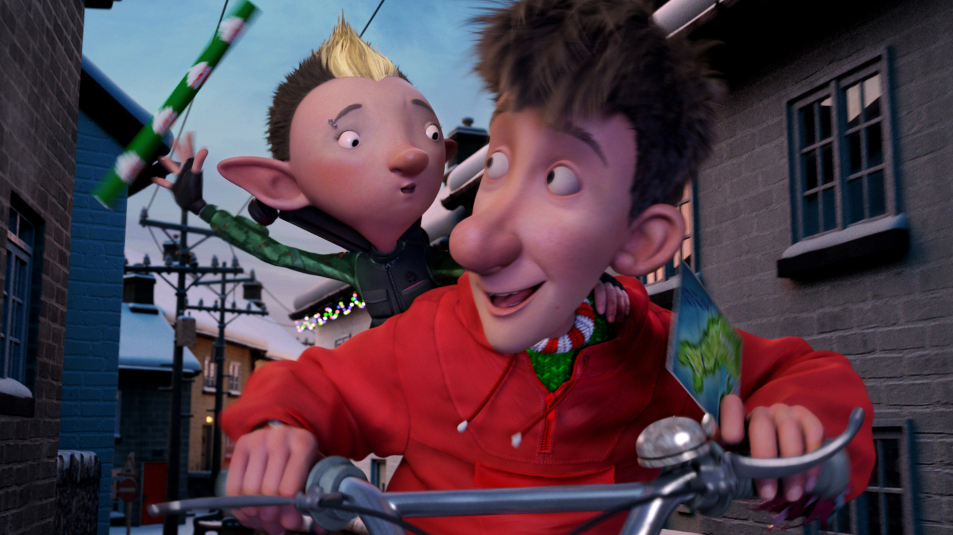 Wrap Star: Bryony the gift-wrap elf (voiced by Ashley Jensen) joins Arthur in a beat-the-clock effort to get a bike to the one girl Santa missed.

And it has all the holiday warmth of a Target gift card — which becomes awkwardly apparent when, after the sleigh has been parked and Steve has declared Mission Accomplished, it's discovered that a conveyor-belt hiccup has left one little Cornish girl without the sparkly pink bike she'd written Santa about. When Steve shrugs it off as within the margin of error, Santa's too tired — and too distanced from the old way of doing things — to object.

Cue second son Arthur (voiced gawkily by James McAvoy), who's been banished to the mailroom, where his dewy-eyed devotion to Santa's image can be channeled into letter-answering, and where his earnest clumsiness won't foul up the works. Rallying his half-senile Grandsanta (a priceless vocal turn from Bill Nighy) and a singularly driven gift-wrap specialist named Bryony (Ugly Betty's Ashley Jensen), Arthur sneaks out of Santa Central to set things right. Global mayhem quite naturally ensues.

It's a truth universally acknowledged that Son of Santa stories, like We Must Save Christmas tales, go wrong more often than right. Not Arthur Christmas. The film gets off to a rousing start with that ho-ho-homes invasion sequence, but leavens every chase with clever jokes, both verbal and visual. (There's a bit on the African savannah, involving furry slippers and a laser pointer, that made me guffaw with delight.) And sure, Arthur's adventure comes 'round eventually to the inevitable triumph-of-the-Christmas-spirit conclusion — but it's just silly and anarchic enough about how it gets there that even dedicated Scrooges are unlikely to mind.

In fact Arthur Christmas, which hasn't been marketed particularly well in the U.S., is the surprise gift of the season: a sharp, savvy holiday comedy that doesn't get its laughs at the expense of those who start to glow in the early days of December. It's a most entertaining package indeed.