Accessibility links
A Prince And A Showgirl, On Location And At Odds Michelle Williams tackles screen icon Marilyn Monroe in a movie about moviemaking — she's filming a comedy with Laurence Olivier, and it's not going well.

A Prince And A Showgirl, On Location And At Odds

A Prince And A Showgirl, On Location And At Odds 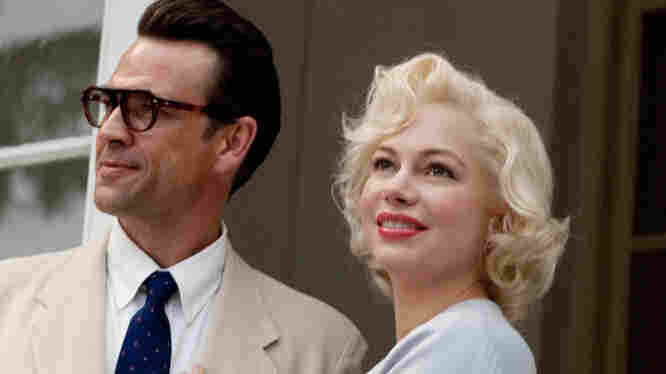 A Yankee At Court: In My Week with Marilyn, Marilyn Monroe (Michelle Williams) is on location in England with her then-husband, the celebrated playwright Arthur Miller (Dougray Scott), to film The Prince and the Showgirl with Laurence Olivier. Laurence Cendrowicz/The Weinstein Co. hide caption 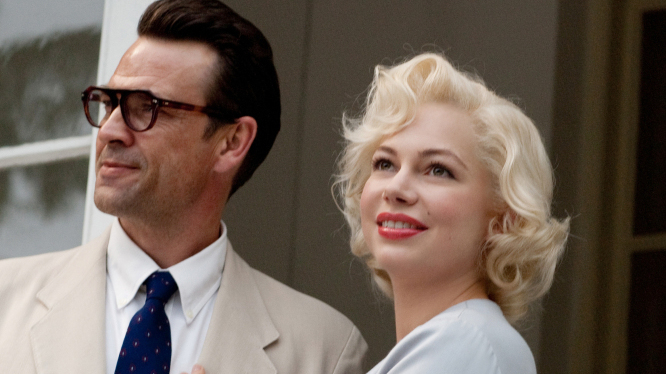 A Yankee At Court: In My Week with Marilyn, Marilyn Monroe (Michelle Williams) is on location in England with her then-husband, the celebrated playwright Arthur Miller (Dougray Scott), to film The Prince and the Showgirl with Laurence Olivier.

My Week With Marilyn

From 'My Week With Marilyn' - 'The Truth Is All That Matters'

'The Truth Is All That Matters'

From 'My Week With Marilyn' - 'Marilyn's Adventure'

There's an old story about Marilyn Monroe window-shopping with a friend on 5th Avenue, at the height of her fame. The friend was suddenly struck by the fact that they'd walked several blocks together on a busy New York sidewalk without anyone appearing to notice the best known and most glamorous star in all of motion pictures.

Monroe wasn't in disguise — quite the contrary, she wasn't even wearing sunglasses. Still, passers-by were simply passing by.

When the friend remarked on this, Monroe is reported to have said, "Oh, do you want them to notice me?" Then she reached into her purse for a lipstick and a scarf, and by the time she'd covered her blond locks with the latter, thrown back her shoulders slightly and taken 20 steps, she was mobbed. Star power was something she had to turn on.

There are moments in My Week With Marilyn that nicely capture that quality of calculated celebrity. The film, ostensibly about the tense working relationship between Monroe and her director-co-star Laurence Olivier on the set of the 1956 comedy The Prince and The Showgirl, is really about writer Colin Clark's image of the star as a fragile, damaged goddess. Clark is the "My" in the title — he's played with sweet naivete by Eddie Redmayne — and in his telling, Monroe might not have made it through shooting had she not had his shoulder to lean on.

Michelle Williams plays the blond bombshell more or less as the screenplay suggests. Terrified in the presence of Olivier (Kenneth Branagh, inhabiting the mannerisms of a legend he has spent much of his career mimicking in other respects), unnerved by her brand-new hubby, Arthur Miller (Dougray Scott), and insecure in the presence of all of the Brit thespians she encounters on the film set, Monroe only really seems comfortable dealing with the public.

Put her in front of a crowd of reporters or randy schoolboys, and she shimmers with sex and star power. In private, she requires the whispered support of acting coach Paula Strasberg (Zoe Wanamaker) and a host of handlers. Clark, 23 at the time and working for Olivier's production company, was pressed into service as one such gofer, and documented his shadowing of the star in the two books (My Week with Marilyn and The Prince, the Showgirl and Me) on which the film is based. 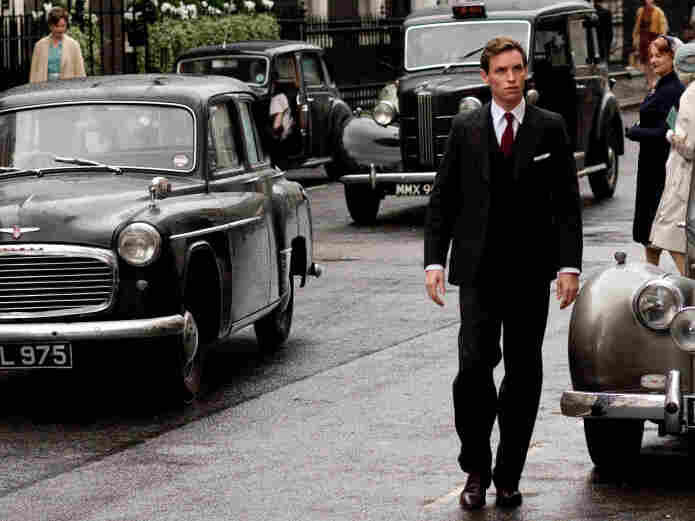 Assigned to mind the impetuous Monroe, Colin Clark (Eddie Redmayne) finds himself drawn into some of her dilemmas — and providing a shoulder in moments of doubt. Laurence Cendrowicz/The Weinstein Co. hide caption 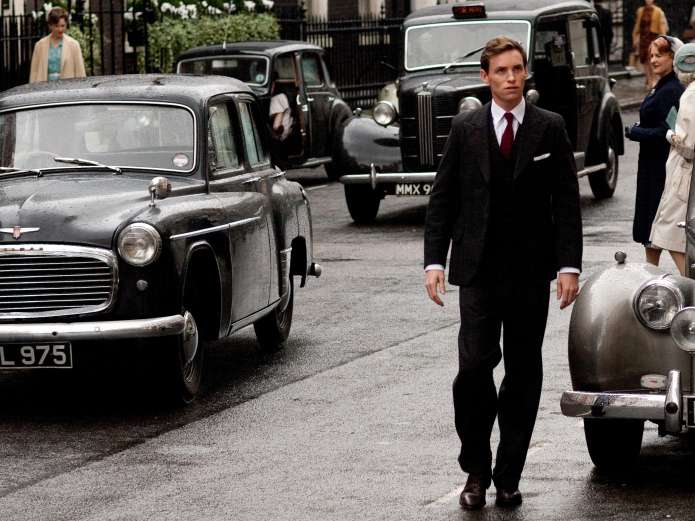 Assigned to mind the impetuous Monroe, Colin Clark (Eddie Redmayne) finds himself drawn into some of her dilemmas — and providing a shoulder in moments of doubt.

Adrian Hodges' script spends more time than it probably should with Clark, who is a pleasant-enough presence but can't really be expected to hold an audience's attention when all these self-dramatizing types are throwing tantrums.

The screenplay is on firmer ground when it's having fun with the different acting languages spoken by Monroe on the one hand and an otherwise classically trained British company on the other. Though they were all making the same frothy comedy, as a student of the Method, she needed a backstory and rationale for every line, while Olivier and the rest of the cast were happy to skate across the surface of the dialogue, simply landing their punchlines.

With Dame Sybil Thorndike (a diplomatic but fierce Judi Dench) as her only defender on a set where she feels bullied and unappreciated, Monroe is soon a basket case. And it's one of the film's nicer conceits that Olivier feels nearly as insecure as she.

He was regarded at that point in his career as a dinosaur, old-fashioned and showy in an era when Marlon Brando, James Dean and their American cohorts were reinventing film acting in a more naturalistic vein. Three years later, Olivier would reassert himself in The Entertainer. (One of its lines, "I'm dead behind these eyes," has been appropriated here for his big moment of self-doubt.)

Monroe, for her part, would bounce back that same year with Some Like It Hot -- but The Prince and the Showgirl was a rough patch for both of them, which makes it fertile dramatic territory.

Director Simon Curtis plows in and does a perfectly workmanlike job of storytelling, shepherding subplots around as if they mattered — Emma Watson's turn as a costume mistress, for instance, who might have had a chance with Clark if the world's most seductive starlet wasn't keeping him company.

But the film rests firmly on the shoulders of its central icon, and Williams, though she doesn't really resemble Monroe in either voice or visage, is pretty splendid at conjuring her. It's not an impersonation, exactly; for much of the picture, she seems more mousy Norma Jean Mortenson than sexy starlet.

But when Williams turns on her inner Marilyn — surrounded by, say, the staff of a stately home she's visiting on the sly — she's a superstar, with a smile that could light up the surrounding county.