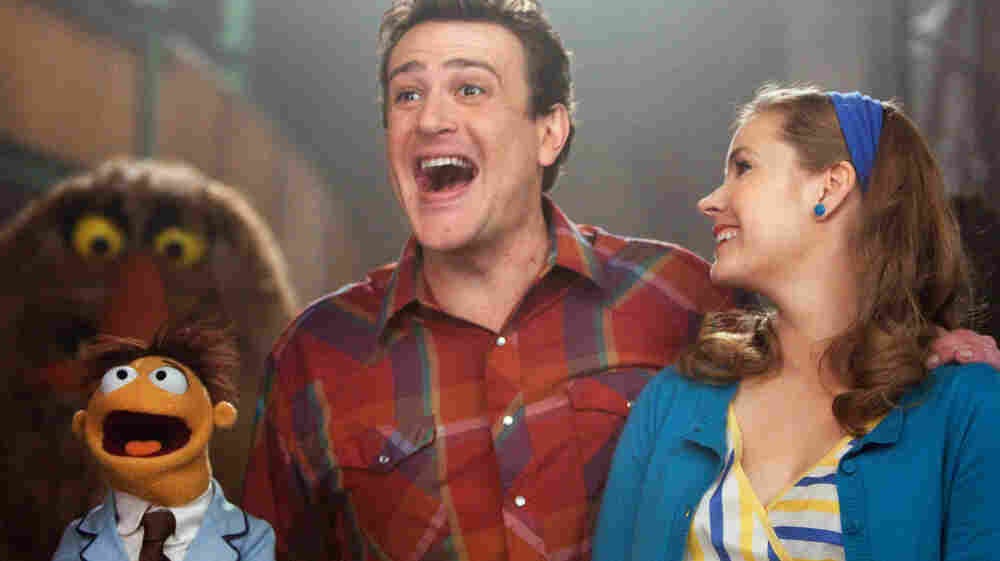 Superfans: Gary (Jason Segel), Mary (Amy Adams) and Gary's brother Walter (the one in felt) set out to tour the Muppet Theater, only to discover that it's in danger of demolition. Scott Garfield/Disney hide caption

From 'The Muppets' - 'We Built This City'

'We Built This City'

From 'The Muppets' - 'Let's Try That Lift Again'

From 'The Muppets' - 'You've Been Replaced'

It's hard not to be both heartened and a little wistful about the fact that The Muppets is probably as good a Muppet project as it's possible to make without Jim Henson.

To understand how audacious it was for actor Jason Segel to take responsibility for Kermit and friends — he drove this project, starred in it and co-wrote the screenplay — you have to understand first that the Muppets are still beloved enough to have inspired fans to launch a recent Oscar-hosting campaign.

And you have to understand, second, that Jim Henson's death in 1990 is, for some of them — for some of us — perhaps the most painful loss of a creative person in their lifetimes.

The Muppets are one of the few remaining cultural creations about which even cynical people rarely express cynicism, about which a deeply irony-infatuated popular culture rarely adopts any battle cry but a Kermit-like Yaaaaay! To touch them is to lay yourself bare even more than Segel did in Forgetting Sarah Marshall. Get it wrong, and you will not be forgiven. He's lucky he got it just about perfectly right.

As The Muppets opens, Gary (Segel) sets out for Hollywood with his brother Walter — who's a Muppet but kind of doesn't know it — and his girlfriend, Mary, played by the surprisingly Muppet-like Amy Adams. Walter idolizes the Muppets and is dying to tour their theater, but when he gets there, it's deserted. The group has broken up, and the place, along with the right to use the Muppet name, is about to fall to a nasty oil baron named Tex Richman (naturally), who's played by an energetically wicked Chris Cooper.

Now, as then, it's just a reason for the Muppets to be themselves — to crack jokes and sing songs, to indulge in broadly cornball jokes both verbal and visual, and to be profoundly, joyfully Muppety. And as that kind of movie, The Muppets is a rollicking, touching, funny success that brings back to life characters who faded after Henson died. 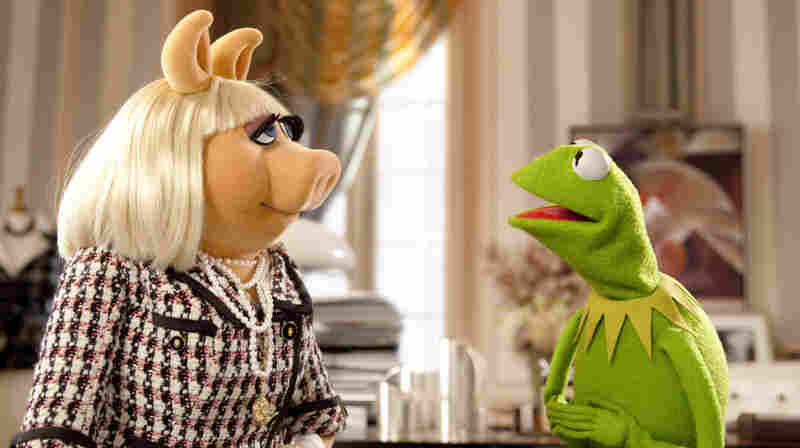 Who, Moi? With a telethon planned to help save the theater, Kermit tries to convince Miss Piggy to give up her Paris fashion-editor job and return to the stage. Scott Garfield/Disney hide caption 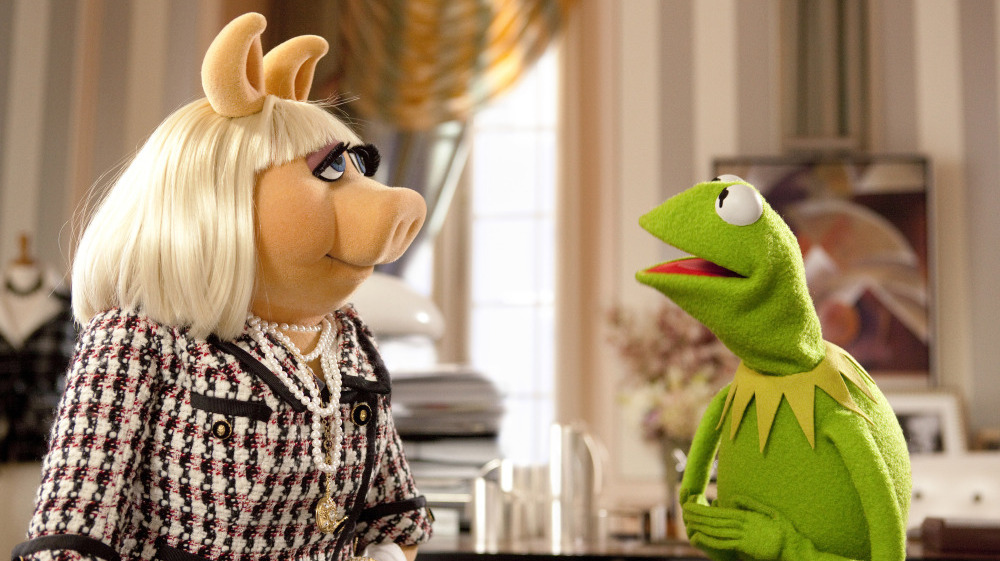 Who, Moi? With a telethon planned to help save the theater, Kermit tries to convince Miss Piggy to give up her Paris fashion-editor job and return to the stage.

In the film, the Muppets have been forgotten by the public because of the hard and cynical times in which we now live, but there is a tacit acknowledgment of what really happened: Kermit walks in the old theater, looking at pictures of the old days and thinking about a comeback, and he sings, "Would anybody watch, or even care? Or did something break we can't repair?"

There is more sadness here than a simple "We became obsolete in the age of the Internet" lament can contain. Without reading too much subtext into what felt puppets are telling you, Kermit is pretty obviously wondering whether they can return after the loss of their leader. You may be surprised to find yourself concluding that they can.

Beyond its emotional heft, The Muppets looks, feels and sounds great. The new songs, some by Bret McKenzie of Flight of the Conchords, are funny and very, well, Muppety — it says something about the tribe's singular sensibility that that's the only right word, no? — and the production design is calculated to be timeless, with fashions and colors that are bright and kid-friendly. The song-and-dance numbers are infectiously likable, with twisted performances of catalog songs that are as weird and delightful as the ones that used to pop up on The Muppet Show. 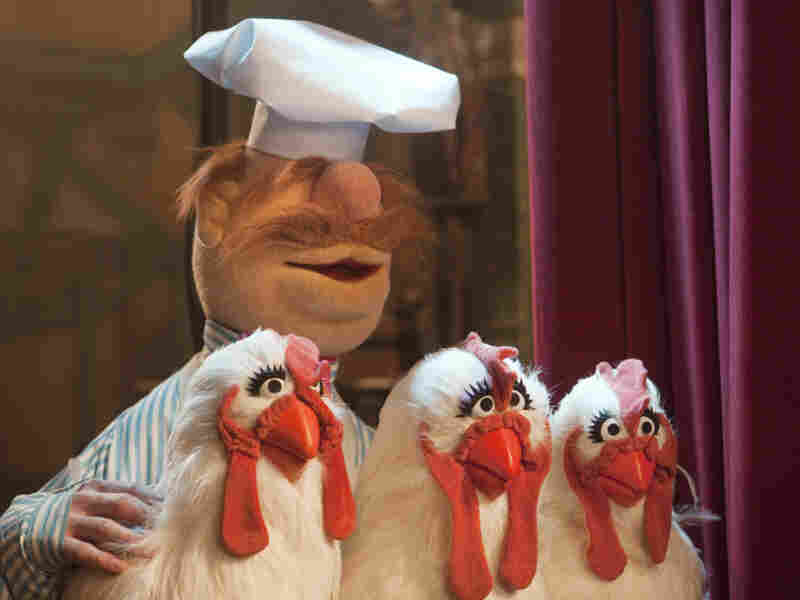 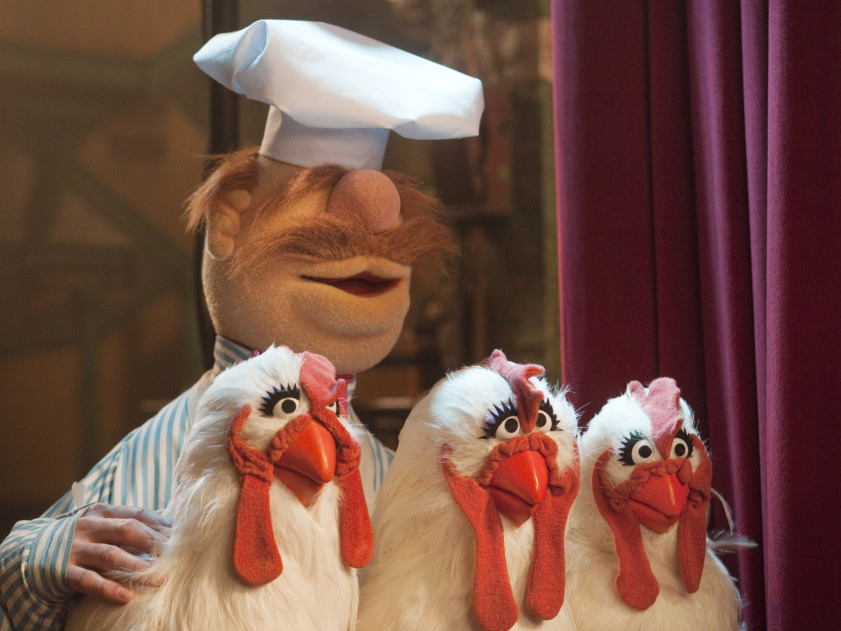 And the celebrity cameos are as perfectly random as you could hope for. The Muppets is packed with genuine surprises you should try not to read about before you see the movie, including an appearance from a CBS sitcom star that contains such demented genius that it seems both inspired and inevitable.

Everyone remembers how The Muppet Movie began in 1979: Once the Muppets settle in to watch their own film, we see Kermit on his log, singing the surprisingly profound song "The Rainbow Connection" with his banjo. But just as important is how it ends — with a haunting moment in which the Muppets' project collapses around them, a rainbow breaks through a hole in the ceiling, and they turn directly to the camera and sing: "Life's like a movie, write your own ending, keep believing, keep pretending ... " They're looking straight at you. You, as a 6-year-old; you, as an adult. You, once-tiny, now-giant Jason Segel.

While The Muppets could easily have seemed like a cheap, watery wannabe, what it feels like is Segel and the rest of the creative team — co-writer Nicholas Stoller, director James Bobin (also of Flight of the Conchords) and everyone else involved — taking that advice to heart. Life's like a movie. Write your own ending. Keep believing, keep pretending.

If the original Muppet material was a gift from Henson and his staff to a generation that fell in love with it, this is that generation indulging a desire to make more and pass it along. Segel and his team are not Jim Henson — but they've done justice to the lovers and the dreamers. (Recommended)