Accessibility links
Movie Review - 'A Dangerous Method' - For An Early-20th-Century 'Hysteric,' A Shocking Therapy In the early 20th century, Carl Jung uses the techniques of Sigmund Freud — and a few of his own — to treat a "hysterical" patient. Keira Knightley, Michael Fassbender and Viggo Mortensen star. 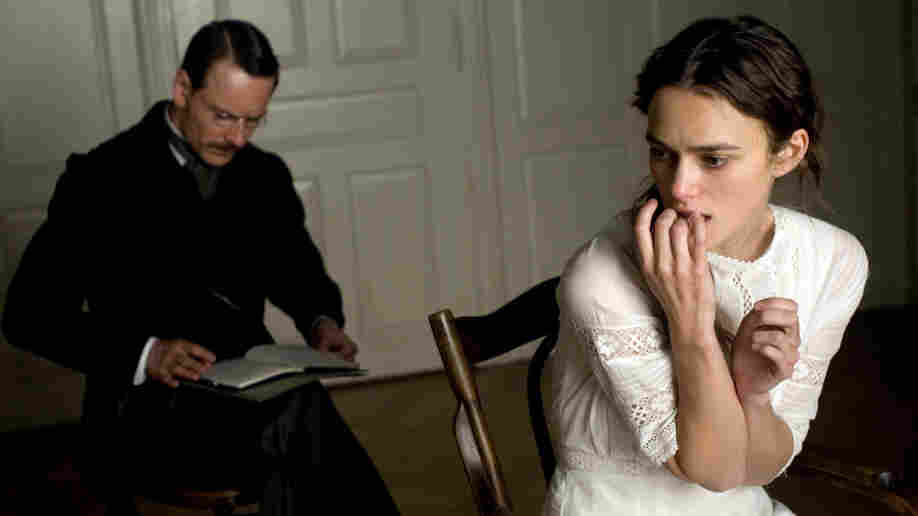 From 'A Dangerous Method' - 'I Think Of You As Galileo'

'I Think Of You As Galileo'

From 'A Dangerous Method' - 'A 13 Hour Conversation'

From 'A Dangerous Method' - 'Never Repress Anything'

In a clash of dueling methodologies, A Dangerous Method depicts the struggle between the coolly intellectual and the messily instinctual. There's also some stuff in there about Sigmund Freud and Carl Jung.

Based on the correspondence of the two psychoanalytic pioneers, the movie began as a book, then became a play by Christopher Hampton, who's best known for writing another perilous work, Dangerous Liaisons. (That script was also based on letters, but fictional ones.) On the other side of the argument is director David Cronenberg, the horror-flick veteran whose most lurid movies could hardly be further removed from Hampton's tidily literary manner.

The two men's styles sync better than might be expected in this smart if somewhat timid drama; Hampton's approach mostly dominates, his tasteful style reinforced by the upscale historical setting and Howard Shore's conventional score. Yet there are flashes of Cronenbergian anarchy that prevent the movie from settling too comfortably into the period upholstery.

The story turns on Sabina Spielrein, a Russian Jewish teenager who arrives at a Swiss asylum in 1904 with a serious case of what was then termed hysteria. As overplayed by Keira Knightley, she's a whirlwind of tics, grimaces, outbursts and contortions. Her problems might seem physical, but Jung (Michael Fassbender) decides to apply the "talking cure" developed by Freud (Viggo Mortensen).

Jung doesn't simply diagnose Spielrein. He enters into her obsession, whipping her before they have sex — an approach that defies the teachings of Freud, who insists that doctors keep a distance from their patients. It also violates Jung's wedding vows to the oft-pregnant Emma (Sarah Gadon), whose inherited wealth funds the family's lavish standard of living.

Later, Jung and Freud actually meet, and the two go on a speaking tour of North America — an oddly truncated episode that seems to have been included in the movie for the sake of a single shipboard conversation. Jung also briefly treats one of Freud's wayward proteges, Otto Gross (Vincent Cassel), who has decided to "never repress anything." Jung disapproves, although his relationship with Spielrein is closer to Gross' lifestyle than to Freud's.

Jung and Freud begin to pull apart, which A Dangerous Method treats partially as a symptom of the gap between Jews and Protestants at the time. Jung's growing interest in the sort of mystical stuff now called "New Age" is mentioned but not really explored. A note at the film's end explains what happened to the principal characters. Spielrein, who became a psychiatrist, might have lived a "normal" life, if not for the Nazis.

Fassbender and Mortensen play their roles coolly and simply, which further emphasizes Knightley's antics. As if the actress weren't conspicuous enough, she uses a Streep-like Russian accent while her colleagues employ the usual Masterpiece Theater diction. The contrast is distracting, though not fatal.

This movie isn't simply work-for-hire for Cronenberg; it treats issues that have long been prominent in his films. Still, the clinical style doesn't play to the director's strengths. A Dangerous Method didn't have to be another Naked Lunch, but Freud plus Jung plus Cronenburg should have equaled something a little more dissonant and troubling.