Accessibility links
Parenting Advice For The 20-Something Years Parenting used to end when the kids left home at 18. Now, more college grads are moving back home. To the rescue: new parenting books on the trials and tribulations of raising your adult child. The hottest topics? Money. And kids moving back home. 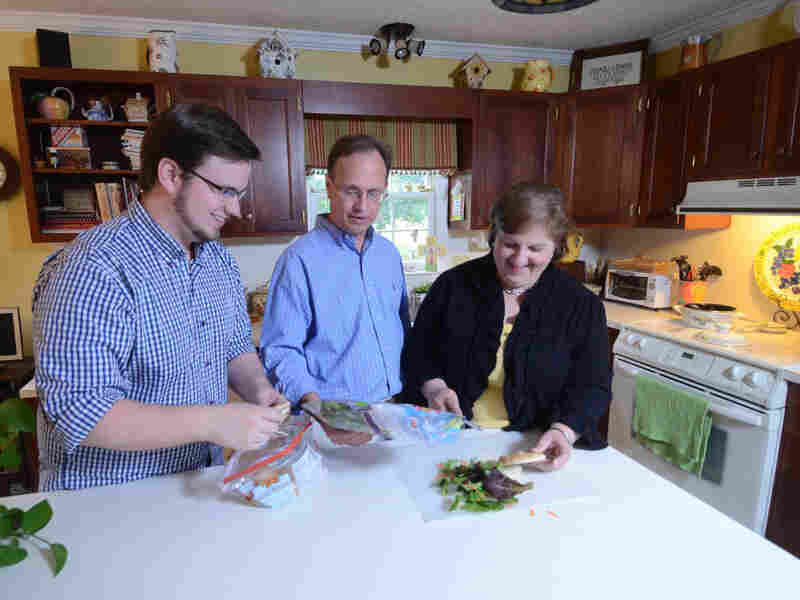 Brian Griffith (left), shown here in 2009 at age 26, moved home with his parents, Jay and Jennifer Griffith, after losing his job. The tight job market, especially for college grads, has prompted many young adults to move back in with their parents. Robert Lahser/MCT /Landov hide caption 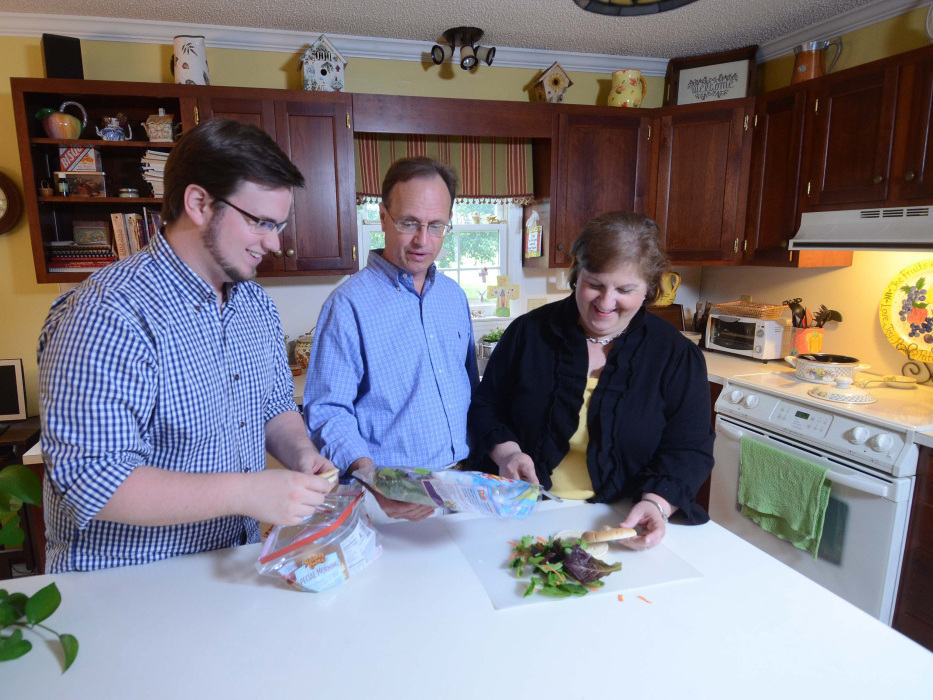 Brian Griffith (left), shown here in 2009 at age 26, moved home with his parents, Jay and Jennifer Griffith, after losing his job. The tight job market, especially for college grads, has prompted many young adults to move back in with their parents.

From pregnancy on, parents often keep a stack of bedside reading full of advice on raising children — survival tips from the terrible toddler years through annoying adolescence. Los Angeles comedy writer Gail Parent figured she'd be done with all that once her kids turned the magical age of 21.

"Because I didn't tell my parents anything bad or negative," she says. "I let them be very peaceful about me when I was an adult. But I had told my kids to tell me everything when they were young."

And so they did — and kept doing it even after leaving home. At that point, Parent was no longer sure how to respond. Now that they were adults, where was the line between friendly advice and unwanted intrusion? There was no manual on parenting for the 20-something years, so in what appears to be part of a budding trend, Parent decided to create one. Her co-author, Pasadena, Calif., psychotherapist Susan Ende, says all their peers were grappling with the same thing.

"All I had to do was say, 'I'm writing a book called How to Raise Your Adult Children,' and somebody would say, 'I've got a problem,' " Ende says.

The hottest topics? Money — and kids moving back home. That trend was well under way even before the recession, which has since forced record numbers of job-seeking and penny-pinching college grads back to their parents' nest. Deserved or not, such "boomerang kids" have acquired a reputation as lazy slackers.

"When we first started this book, we thought it was all the kids' problem," says Parent.

But Parent says she soon discovered a lot of baby boomer parents are quite the enablers. She heard stories of them accompanying their kids to college class registration and negotiating grades with professors.

"I heard a parent saying on her cell phone, 'No, your father is not going to write your term paper for you!' "

Parent admits to some micromanaging herself, but says it's no wonder kids today can't make decisions on their own. And no wonder they feel entitled to move back home, rent free. Ende says parents may be happy to help, especially in this down economy.

"But parents have a difficult time setting time limits," she says. "Saying, 'You have to obey my rules because it's my house.' And, 'My money is my money, and you don't get to decide that I'm supposed to give it to you.' "

Others take a more sympathetic view.

"Should we just cast them loose at age 18 or 22 and say, 'You're on your own, and we're not going to help you anymore?' " asks Jeffrey Jensen Arnett of Clark University. Arnett is an expert on delayed adulthood, and his own parenting book on 20-somethings is due out next year. He says social norms are changing, and the 20s are a tough decade for both generations.

All I had to do was say, 'I'm writing a book called How to Raise Your Adult Children,' and somebody would say, 'I've got a problem.'

"A lot of parents say, 'Gosh, when I was 23 ...' " and note that they were already set on their career path and even had children, Arnett says. "They look at their children, and they see them nowhere near that, and they feel like their children are not making it. But that's not true."

Arnett says young adults today typically change jobs seven times before age 30 — yes, often quitting ones their parents find perfectly good. And with the average age of marriage continuing to rise, a life partner may still be nowhere in sight.

"There's a great deal of comfort for parents just in learning that that today is perfectly normal," he says. "Thirty really is the new 20."

The message for parents in both of these books: It's OK to let go."You won't lose your child," Ende says. "You'll just get a better version of them."