Accessibility links
Wal-Mart Lures Bank Customers Frustrated By Fees The retailer's prepaid debit card is catching on with people who've been burned by extra charges at big banks. The card costs a flat $3 a month and doesn't allow overdrafts. Banks have lobbied against Wal-Mart's entrance into the financial sector, but "their worst fears came true," one analyst says. 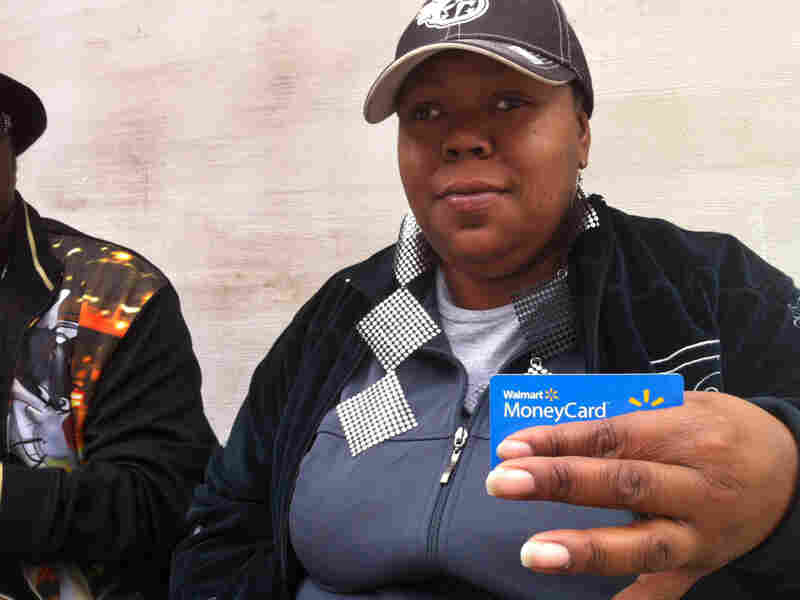 Linda Black of Nashville, Tenn., says she left Bank of America after repeatedly being hit by fees. She now uses the Walmart MoneyCard instead, which has a flat fee of $3 a month. Blake Farmer for NPR hide caption 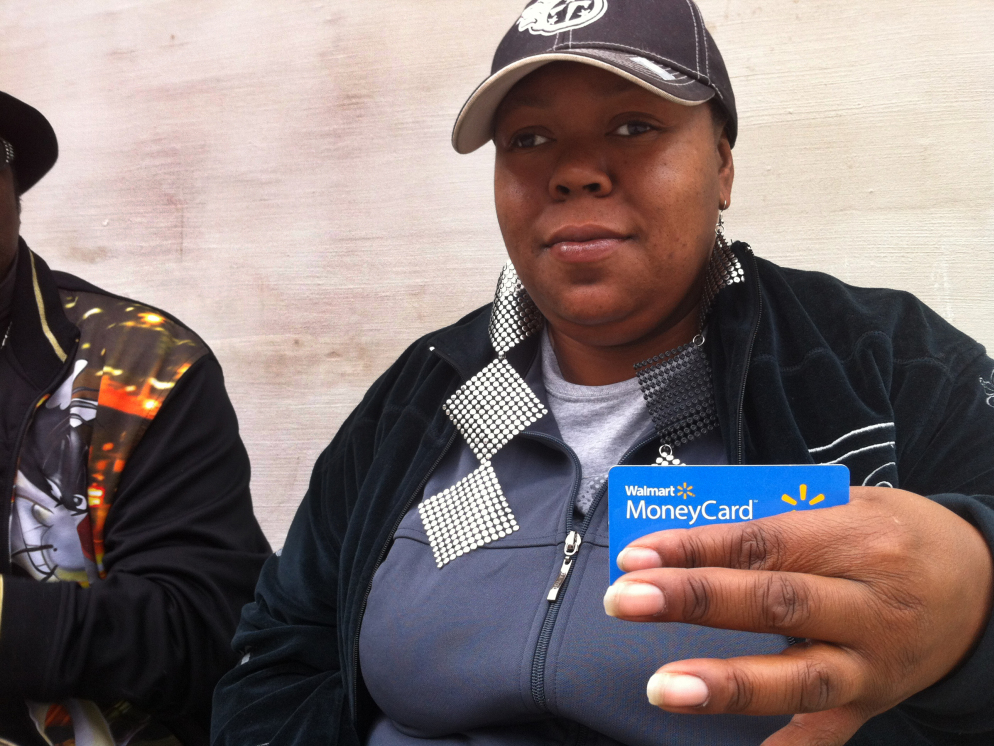 Linda Black of Nashville, Tenn., says she left Bank of America after repeatedly being hit by fees. She now uses the Walmart MoneyCard instead, which has a flat fee of $3 a month.

The Occupy Wall Street movement has directed much of its anger at giant banks, which are no strangers to customer complaints. Some of those who have been burned by high fees in recent years are now satisfying their banking needs with a giant retailer instead, as Wal-Mart surges into the financial sector with a pre-paid, reloadable debit card called the MoneyCard.

At the downtown bus terminal in Nashville, Tenn., it feels like almost everyone is armed with the card. Linda Black, the first person I walk up to, is happy to show off her blue plastic. Like others, Black has not had a good track record with banks, specifically Bank of America.

"Every time I went there, I'm owing this, I'm owing that," Black says. She was frustrated that even though she had money in the account, she'd always have more fees to pay.

"So I said forget it," she says. With Wal-Mart, she says hasn't run into unexpected fees, just a flat $3 a month.

Lisa Barnes, a waitress, says she's been saving money with the card since overdrafting isn't even an option.

You can't spend what you don't have, so you can't go over. You [just] don't get in trouble with it.

The card still has many of the advantages of a bank account, such as ATM withdrawals and direct deposit.

"I've been using it since last year," says Stacey Nixon, a child care provider who sends her paycheck right to Wal-Mart. "[You] fill out a form and your money comes directly on the card."

Nixon says it's possible to do everything she needs to with the MoneyCard, like buy things online, pay bills, even buy movies from Redbox. "You can basically do anything with it," she says.

Attracting Customers From Other Banks

That's why Nixon has closed her bank account, technically joining the ranks of the "unbanked."

The Federal Reserve estimates roughly 60 million Americans do most of their business in cash. The unbanked have long been targeted by companies like NetSpend and H&R Block for prepaid debit cards. But increasingly, it's bank customers who are moving to services like the Walmart MoneyCard.

"They are thinking about it in terms of Wal-Mart is where I go to do my money management," says Ben Jackson, who follows the debit card market for Mercator Advisory Group.

Is Wal-Mart A Magnet For American Mayhem?

"The banks lobbied very hard to prevent Wal-Mart from getting a bank charter and in a lot of ways I think ... their worst fears came true in that Wal-Mart is still competing with them," Jackson says.

Wal-Mart didn't make anyone available for an interview, and the company won't say how many MoneyCards are out there. But Jackson estimates as many as 2 million are active right now.

Instead of ceding the ground to Wal-Mart, a few traditional financial institutions are coming out with prepaid offerings of their own. But going toe-to-toe with Wal-Mart isn't easy, says finance professor Richard Grant of Lipscomb University. The retail juggernaut has the ability to keep prices low and the lights on all night.

"Wal-Mart is open a lot longer than just about any bank I know of," Grant says. "I guess the way to say it is Wal-Mart doesn't have banker's hours."

Grant says banker's hours may not be safe for long, especially when so many people like Stacey Nixon are excited by the MoneyCard. "They're catching on," she says.

Nixon plans to persuade her mother to get one next, but her whole family could be banking at Wal-Mart before long — and there will be more right behind them. The research firm Aite Group predicts double-digit annual growth for prepaid cards through 2014.