Accessibility links
Egypt's Military Promises To Speed Up Power Transfer Field Marshal Hussein Tantawi said Egypt's ruling military council would hand power to a civilian government no later than July, and that presidential elections would be held by June 30. The address was rejected by tens of thousands of protesters in Cairo's Tahrir Square who are pushing for a "second revolution."

The head of Egypt's ruling military council said the transfer of power to a civilian government would come no later than July, but that if the people demanded it, he would allow a referendum that could make the shift even sooner.

In his address, Field Marshal Hussein Tantawi sought to cast the military as the nation's foremost patriots and angrily denounced what he called attempts to taint its reputation. 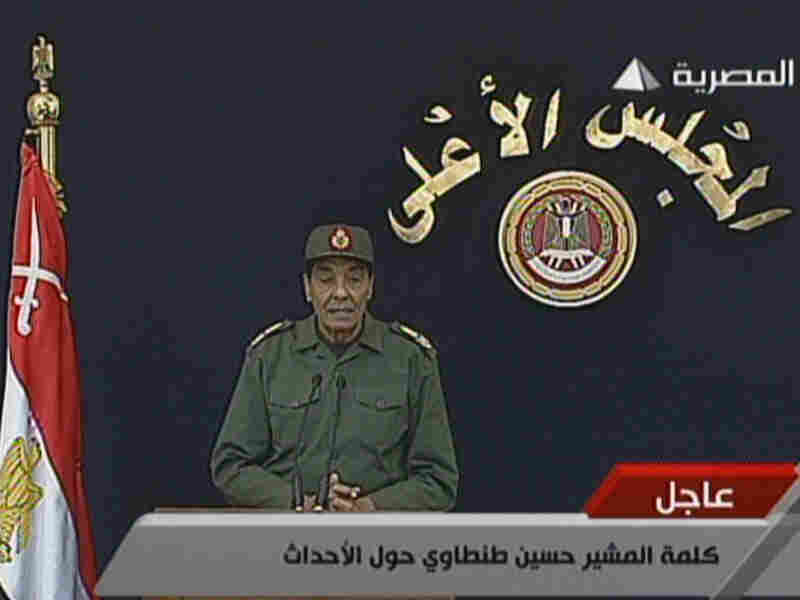 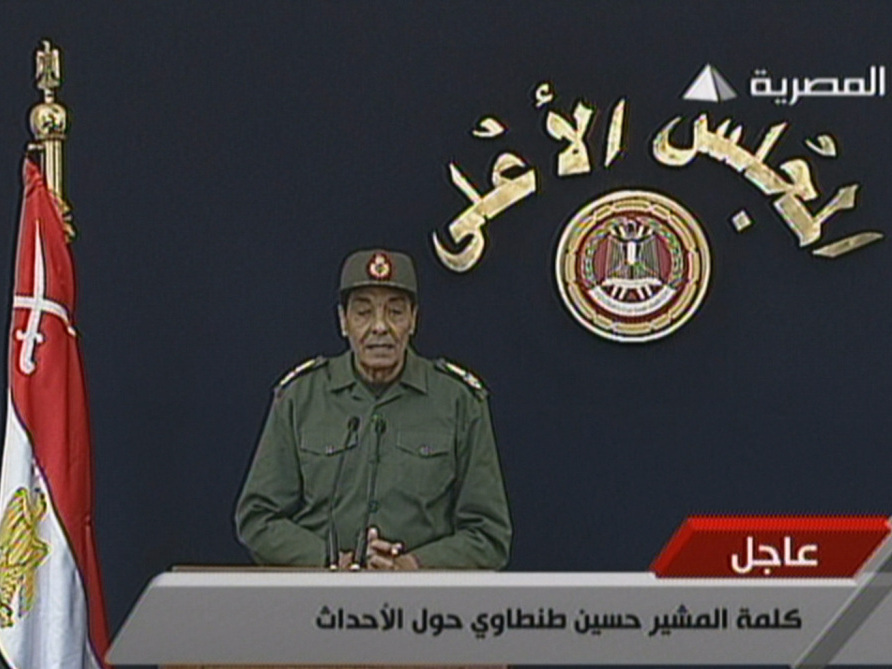 "People and the armed forces are together," he said in the 10-minute speech.

"We have started some reforms to a democratic lifestyle," he added. "We agree that the armed forces will never be an alternative to civilian rule."

Tantawi said he had accepted the resignation of the military-appointed government led by Prime Minister Essam Sharaf, and that the council planned to form a "national salvation" Cabinet to replace the old one. Presidential elections would be held by June 30, he said, without specifically mentioning a date for the transfer of power.

Tantawi also said that if a referendum calls for it, the military will go back to its original role.

NPR's Soraya Sarhaddi Nelson, reporting from the scene of the protests in Cairo, said what's not clear is what exactly that role would be in a civilian-led democracy.

"They are seeking autonomy from civilian oversight," Nelson said. "They want to be able to step in if they feel things are not going the way that is good for the country, at least from their viewpoint."

The announcement was immediately rejected by an estimated 100,000 protesters in Cairo's Tahrir Square who want to see the interim military council resign immediately. The crowd responded to Tantawi's proposal with chants of erhal, or leave.

One activist who spoke to Nelson said that these concessions would create a rift between powerful political forces who have stood together against military rule up until this point.

Nelson said the divide would likely be between those who want to see the elections proceed because they see it as a necessary step to creating a democracy in Egypt; and those who want a more immediate departure of Tantawi and the military rulers, and to have authority handed over to a neutral civilian body.

The first free parliamentary elections are scheduled for Monday, but Nelson said if the protests and violence continued, it could dissuade many from going to Tahrir Square to participate.

The latest wave of protests and violence around the country that began on Saturday has left at least 29 people dead and thrown Egyptian politics into chaos less than a week before landmark parliamentary elections were to begin. Activists said they hoped Tuesday's mass rally in Cairo would bolster support for a "second revolution," following the uprising that ousted President Hosni Mubarak in February.

Nearly 2,000 people have been wounded in the recent spasm of violence. Nelson said rescue and medical workers on the front lines around Tahrir Square were having a hard time keeping up with the casualty rate. 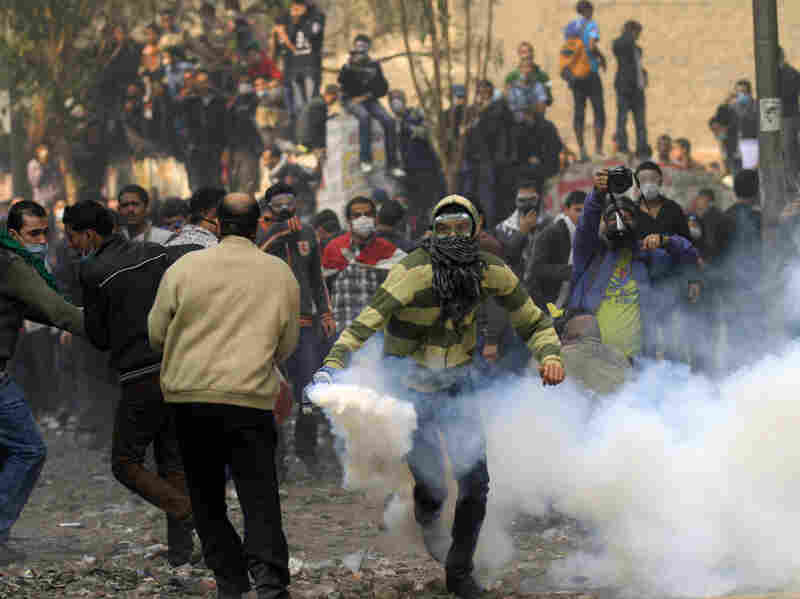 A protester runs to throw a tear gas canister away from the crowd during clashes Tuesday with Egyptian riot police near Tahrir Square. Khalil Hamra/AP hide caption 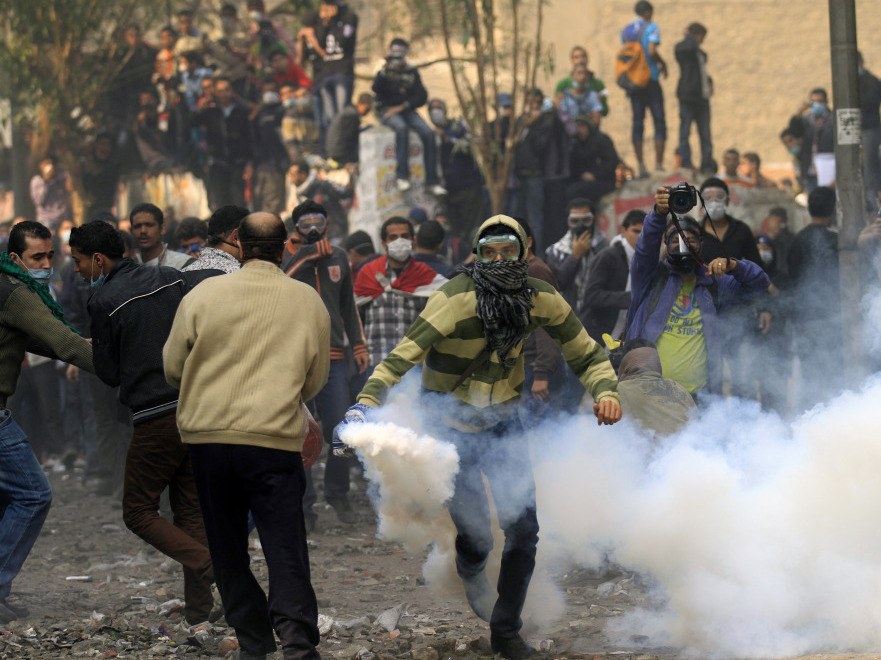 A protester runs to throw a tear gas canister away from the crowd during clashes Tuesday with Egyptian riot police near Tahrir Square.

The injured were carried by comrades on motorbikes from the front line. At a field hospital set up in a mosque at the square's edge, dozens of weary volunteer medical workers triaged patients on dusty blankets spread outside.

Trauma surgeon Seif Khirfan said staffers have seen as many as 100 patients an hour, and that he had seen evidence of live rounds being used.

"Well, the gunshots are the worst, especially the ones in the head — they are terrible," Khirfan told NPR. "You see them for a very short while, then you have to transfer them to a bigger hospital, but the few seconds that you actually get in contact with [them] is really very tormenting to see."

He added that the tear gas appeared to be more toxic than that lobbed by police forces during the first uprising in January.

Three American students at the American University of Cairo were arrested during the clashes, according to the university, which is adjacent to Tahrir Square. An Egyptian Interior Ministry official said they were arrested Monday night while on the roof of one of the university's buildings throwing firebombs at security forces in the square.

A spokeswoman for AUC, Rehab Saad, said the three had been on a study abroad program, and that the university was in contact with the students' families and the U.S. Embassy in an effort to resolve the matter.

In many ways, the protests bear a striking resemblance to the 18-day uprising beginning Jan. 25 that toppled Mubarak. The chants are identical, except that military ruler Tantawi's name has replaced Mubarak's.

"The goal is to get rid of the government. They're still stealing, and people can't eat," protester Raed Said, 23, told The Associated Press as he walked with an arm around a friend who was choking from the tear gas. "The field marshal has to leave because he's trying to protect Mubarak and doesn't want to try him, so he has to go."

Tuesday's rally, dubbed "Egypt's Salvation," came a day after Sharaf's civilian Cabinet submitted its resignation to the military council, and a few days before the country's first parliamentary elections since Mubarak was forced to step down. Fears were high that the turmoil would disrupt elections due to begin Nov. 28.

Amnesty International harshly criticized the military rulers in a new report, saying they have "completely failed to live up to their promises to Egyptians to improve human rights."

The London-based group documented steps by the military that have fallen short of increasing human rights, and in some cases have made matters worse than under Mubarak.

"The euphoria of the uprising has been replaced by fears that one repressive rule has simply been replaced with another," according to the report issued early Tuesday.

The report called for repeal of the Mubarak-era "emergency laws," which have been expanded to cover "thuggery" and criticism of the military. It said the army has placed arbitrary restrictions on media and other outlets.

Egyptian security forces have continued to use torture against demonstrators, the report said, and some 12,000 civilians have been tried in military trials, which it called "unfair."

A military spokesman, meanwhile, told the AP that the military has set up barbed wire and barricades around the security headquarters to prevent protesters from storming the building. "We are only here to protect the Interior Ministry," he said.

The spokesman, who asked not to be identified because he wasn't authorized to release the information, also said army officers and soldiers had been forbidden to enter Tahrir Square.

In violence elsewhere, Egypt's state TV reported that three people were killed overnight in the Suez Canal city of Ismailia, east of Cairo, raising the overall death toll from the clashes to 29.

Vali Nasr, a former Obama administration adviser who is now a professor at Tufts University, said Egyptians' challenge to the military is an inevitable stage in its move toward democracy.

"The sooner you break the hold of the old order and the security order, the more you actually have a chance at democracy," Nasr, who is the author of The Rise of Islamic Capitalism, told NPR. "You have to break their hold over the economy. That's really critical, and the battle hasn't gone there yet."

NPR's Soraya Sarhaddi Nelson reported from Cairo for this story, which contains material from The Associated Press.