Accessibility links
Kitchen Window: Looking Forward To Thanksgiving Leftovers Americans' favorite way to eat leftover Thanksgiving turkey is in a sandwich the next day. But this time, think outside the bread: Try tucking turkey into quinoa salad, quesadillas or an egg scramble. Cranberries and mashed potatoes get a second life, too. 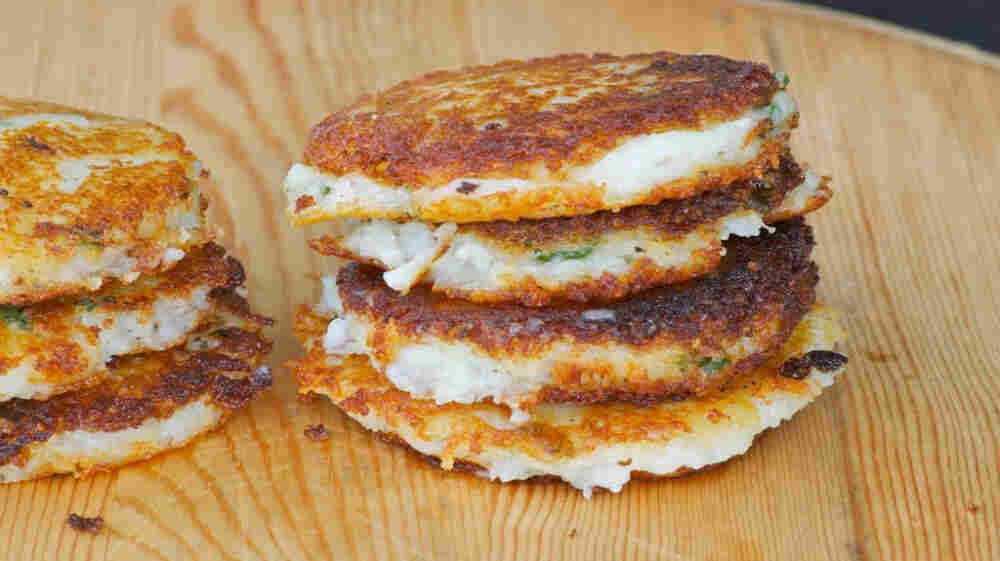 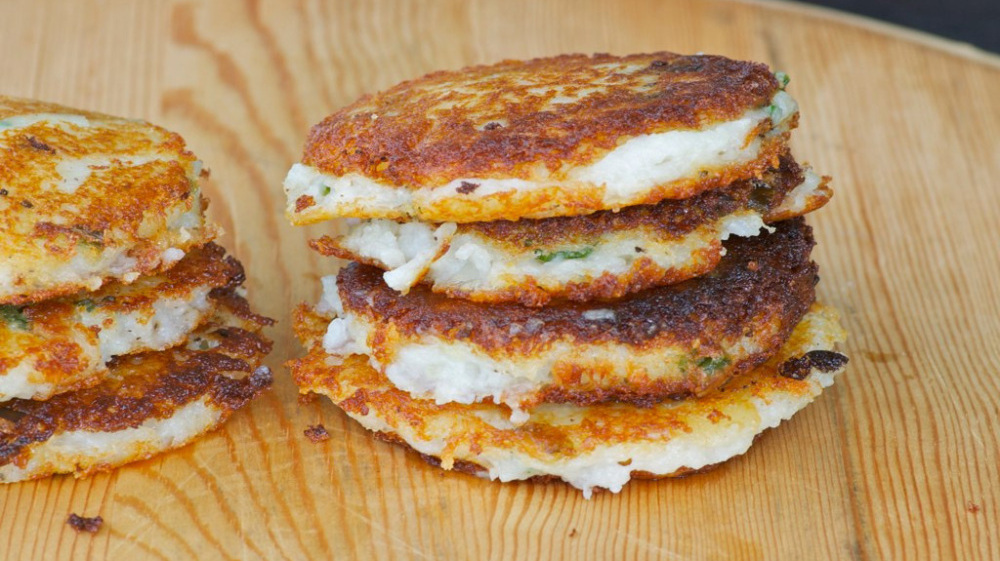 For many Americans, the best part of Thanksgiving dinner happens on the Friday after the holiday, when the leftovers begin. The November celebration that began at a single table nearly 400 years ago has grown into a holiday feast eaten in nearly 90 percent of American households. According to the National Turkey Federation, Americans gobble more than 690 million pounds of the big bird every Thanksgiving.

Most birds will be roasted, others brined, a lucky few deep-fried. Yet, most of us won't enjoy the turkey on Thanksgiving, no matter how expertly cooked, because we'll have already grazed for hours on hunks of warm cornbread, hills of herb stuffing and mounds of creamy mashed potatoes. And let's be honest, we'll often deliberately skimp on the turkey in order to savor a slab of homemade pumpkin pie.

This is why Americans' favorite way to eat leftover turkey is in a sandwich the next day. Is there an American household that doesn't make some version of the day-after-Thanksgiving turkey sandwich? Although I love sandwiches — I wrote an entire book in praise of the humble edible — this year I'm going to think outside the bread.

There's no shortage of leftover Thanksgiving recipes available both online and in print. From understated turkey chili to something called Thanksgiving turkey cake — a multilayered sandwich made from turkey, mashed potatoes and stuffing — there really is something for everyone.

Keep in mind that leftover turkey is best eaten within three to four days after Thanksgiving. After that, you risk that funky leftover turkey taste. You know what I'm talking about.

While turkey will always be the wallflower at the poultry party, when paired with the right partner it can be just as tasty as the more popular chicken.

Not surprisingly, turkey is most comfortable in cuisine of the Americas. Turkey pot pie topped with mashed potatoes, stuffing or cornbread is a quintessential leftover favorite, as are hot turkey melts and cold turkey salad wraps.

Because it marries well with Mexican seasonings such as cumin, chipotle chili powder and cilantro, turkey makes a delicious filling for migas, tacos, chili, nachos, burritos and quesadillas.

As for other cuisines such as Asian, Indian and Italian, well, you might want to stick with chicken. There's something jarring about the idea of eating Vietnamese turkey pho, Indian turkey samosas or Italian turkey lasagna. People do it, but I wouldn't recommend it.

I would recommend, however, topping a toasty English muffin with hot turkey, gravy and a fried egg for a stellar day-after-Thanksgiving breakfast, or making a belly-warming pot of turkey soup with homemade turkey stock, mixed vegetables and rice.

As for the leftover cranberry sauce, try one of these: Swirl it in your oatmeal or yogurt; smear it on a bagel with cream cheese; spread it on a turkey, ham or pork sandwich; blend it into a smoothie. Or eat it straight out of the Tupperware container like I do.

Stuffing can have a second life, too. Use it as a topping on a pot pie, pack it into mushroom caps for stuffed mushrooms or spoon it into colorful bell peppers for a hearty vegetarian entree.

As for the leftover string beans, broccoli, squash and other vegetables, well, they don't mind if they're not repurposed. Just eat them as they are.

So this year as you pack your Thanksgiving leftovers into the refrigerator, you'll be armed with a number of creative recipes for the days to follow. Just do me a favor — please don't under any circumstances make leftover Thanksgiving turkey cupcakes with mashed potato "frosting." The bird deserves at least a modicum of respect.

Perhaps it's because I live in San Diego, but I drink smoothies year-round, especially pre-workout. With its distinctive tartness, cranberry sauce makes a ho-hum smoothie suddenly sassy. If you want to use whey or soy protein powder, then add the desired amount. 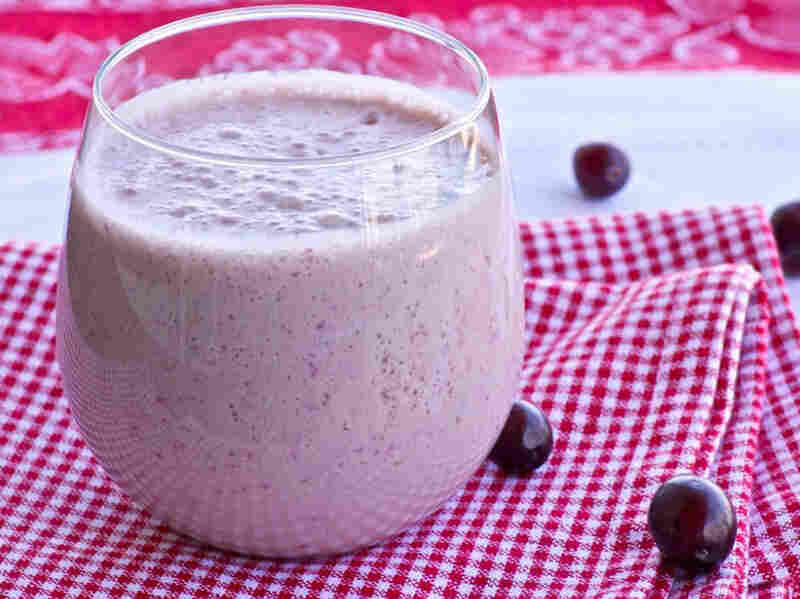 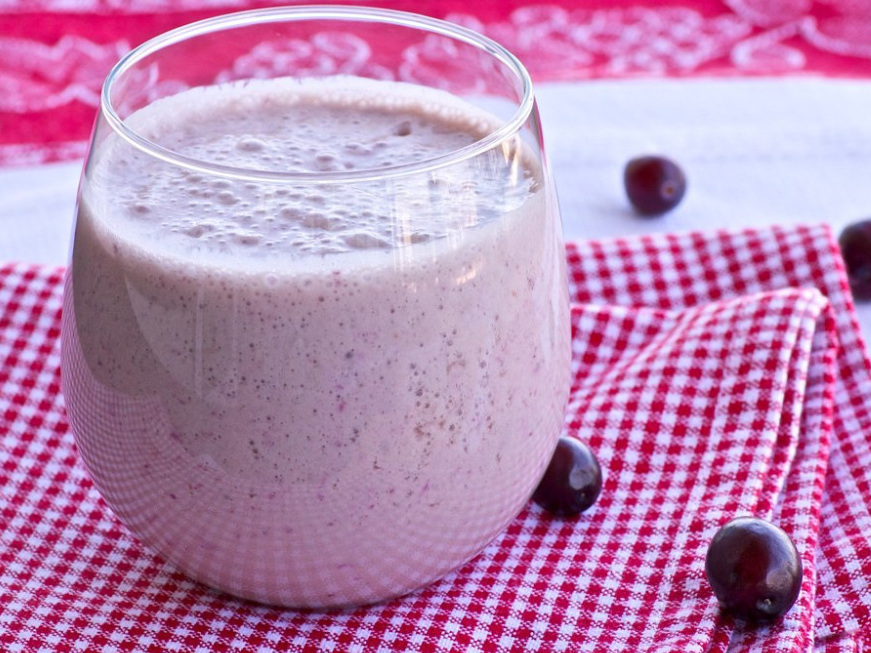 Place all ingredients in a blender and blend on high for 15 seconds, or until thick and frothy. If you like it thinner, then simply add a bit of water.

A beloved Tex-Mex dish, migas typically consist of eggs scrambled with tortilla strips, onions, peppers, tomatoes and cheese. They can be made with or without meat and are usually accompanied by refried beans and pico de gallo. This recipe incorporates leftover turkey, making it a hearty breakfast, brunch or breakfast-for-dinner meal. Use any kind of your favorite salsa. 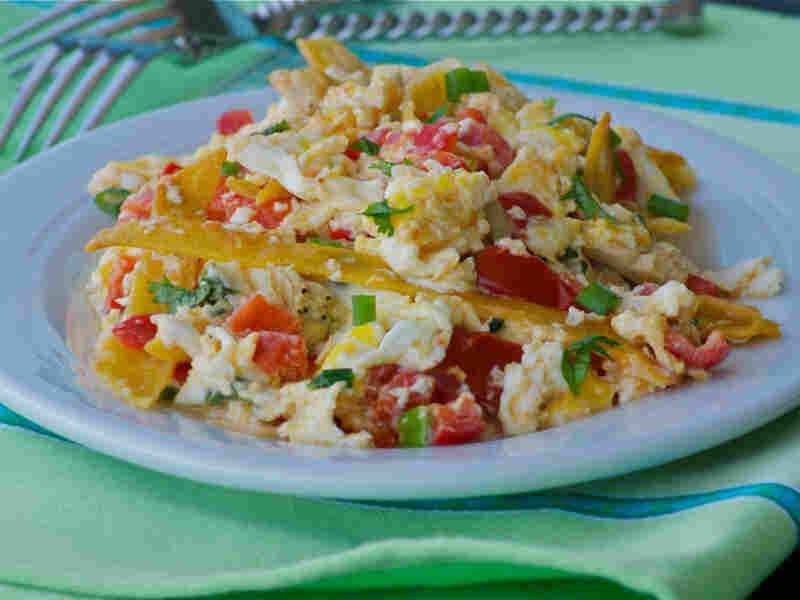 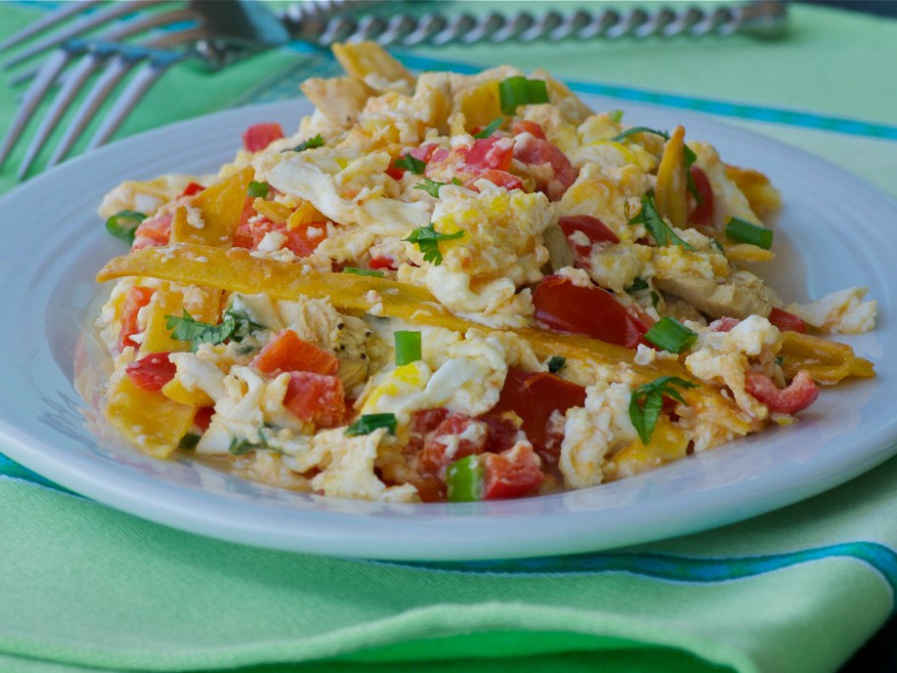 A couple of dashes each of salt and black pepper

In a medium bowl, whisk eggs with salt and pepper.

In a large skillet over medium-high heat, warm oil. Once it's very hot, add the tortilla strips, cooking 2 to 3 minutes, until golden underneath. Flip and cook an additional 2 minutes until golden. Using a slotted spoon, transfer the strips to a paper towel-lined plate.

In the same skillet with the oil, add red bell pepper, scallions and jalapeno pepper. Saute 2 to 3 minutes, or until just softened. Add the turkey, stir, and heat for 1 to 2 minutes. Add the eggs and let them sit for a minute before you begin to slowly stir them from side to side. When eggs are nearly cooked through, add the salsa, cheese and cilantro and gently toss. Cooked eggs should be fluffy and soft but not runny. Garnish with extra cilantro and serve hot. Migas go well with warm flour tortillas, cornbread, refried beans and guacamole.

If you've never had mashed potato cakes, you're in for a treat. Though simple to make, there are a few tips: Use real mashed potatoes instead of boxed; take them cold from the refrigerator before cooking, and if your mashed potatoes have a lot of moisture, say from heavy cream or milk, then you may need to add more cornstarch. When forming the cakes, make sure they're not too soft or too thin, or they'll spread when cooking. When cooking in the hot oil, resist the temptation to flip them too early, otherwise a crunchy golden crust won't form. I gently season my mashed potato cakes, but feel free to add your own favorite seasonings and herbs such as minced garlic, chives, sage or rosemary. 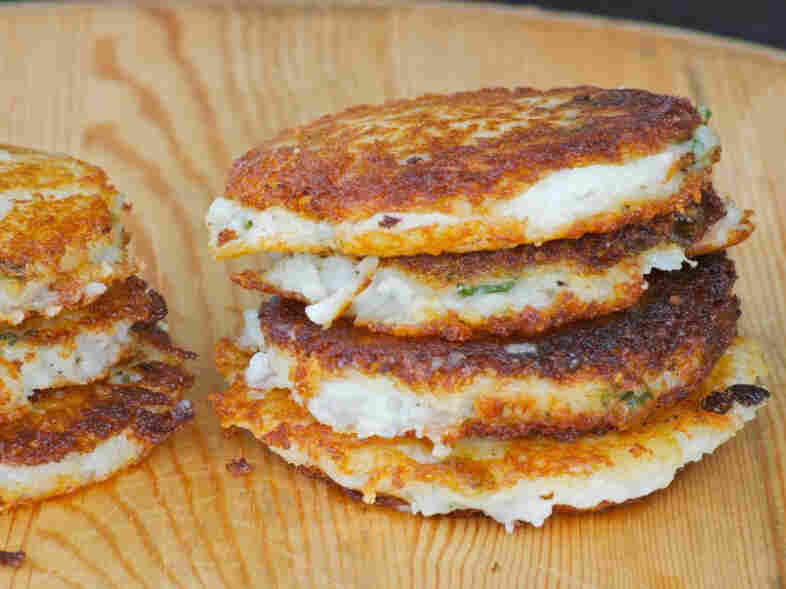 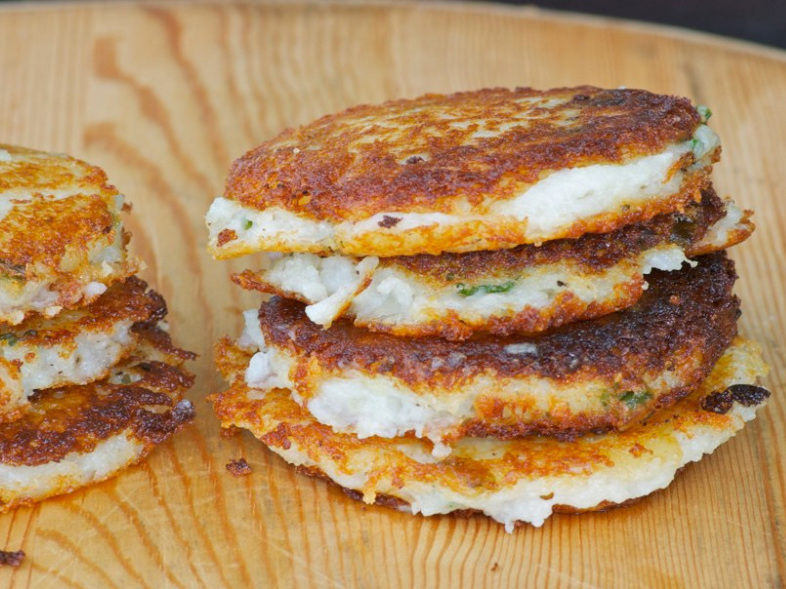 Cover the bottom of a large skillet with canola oil and place over medium-high heat.

Place 2 cups of leftover mashed potatoes in a medium bowl. Add the remaining ingredients, starting with 4 tablespoons of cornstarch, and gently blend with your hands. Feel it. It should be somewhat heavy and smooth. If it's soft and sticky, then add a little more cornstarch.

Make sure the oil is very hot before placing the pancakes in the skillet. Once ready, cook 3 to 4 at a time, making sure to not overcrowd them. Cook for about 5 minutes, or until a golden crust forms, then flip once. Cook an additional 4 to 5 minutes until golden. If they're getting too dark, lower the heat. Place on a paper-towel lined plate. Repeat. Serve with sour cream, applesauce, leftover cranberry sauce, maple syrup, salsa or hot sauce.

Although more colorful and nuttier, red quinoa has the same nutritional benefits as traditional cream-colored quinoa and should be used the same way. Dazzling pumpkin-colored persimmons are at their peak now and are available at most supermarkets. For this recipe, make sure you buy the Fuyu variety that's hard and shaped like an apple. If you can't find persimmons, use a crisp, sweet apple or pear instead. 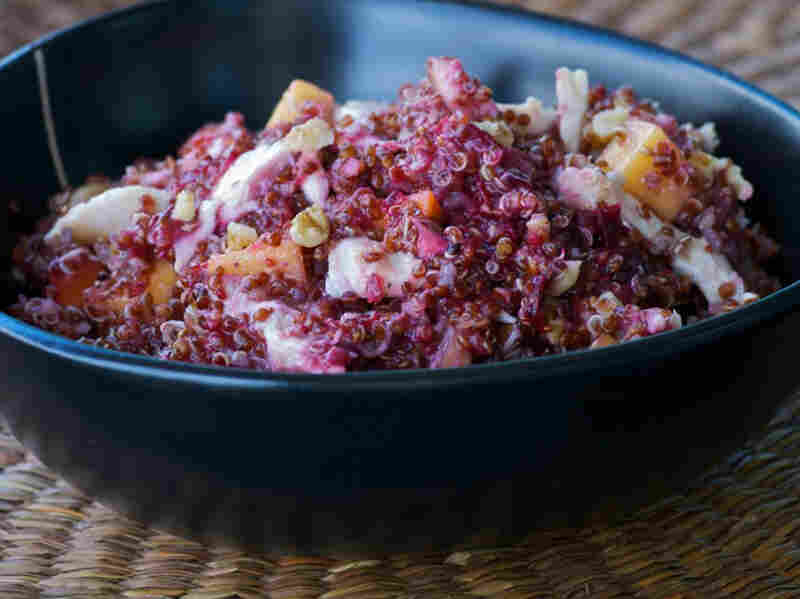 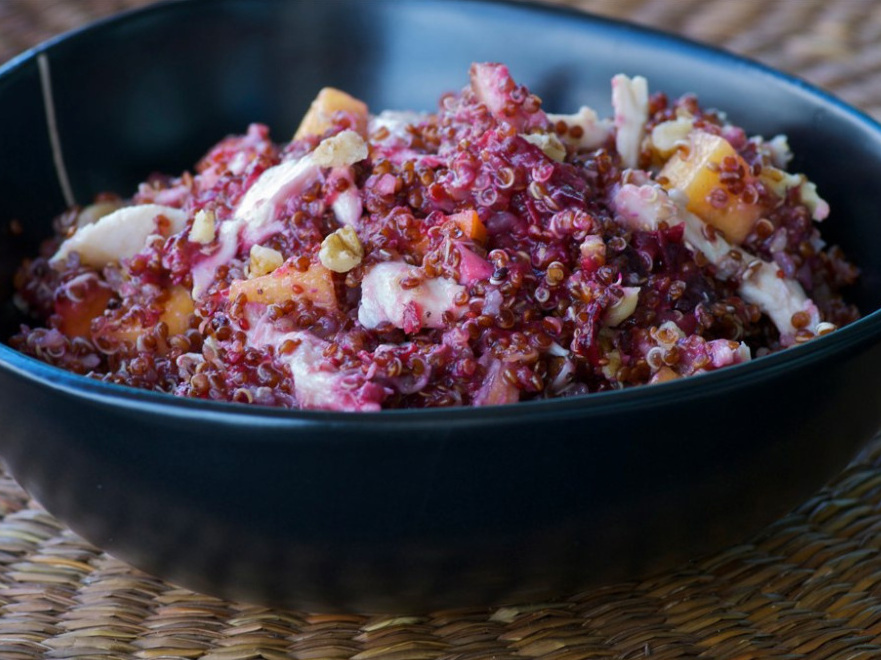 Makes 4 main or 8 side servings

In a large bowl, combine quinoa, persimmons, turkey and nuts and toss.

To make the dressing, in a small pot over medium-high heat, add cranberries and water. Cook until they begin to pop. Let cool. Meanwhile, in a small bowl, whisk olive oil, vinegar, maple syrup, salt and pepper. Place both the cranberries and the oil mixture in a small food processor and puree. It's OK if it's a little lumpy. Pour the still-warm dressing over the salad and toss until well coated. Serve at room temperature, with blue cheese garnish if desired.

A tasty alternative to sandwiches, quesadillas are as much fun to make as they are to eat. This recipe calls for leftover turkey sauteed with onions and kale, but you can do any number of combinations, including turkey and beans, turkey and mashed squash, or turkey and mashed potatoes. Quesadillas and rules don't get along too well, so feel free to play around. 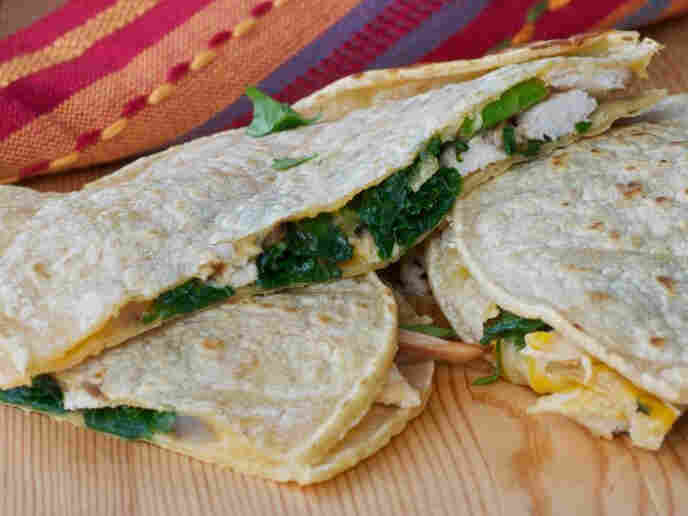 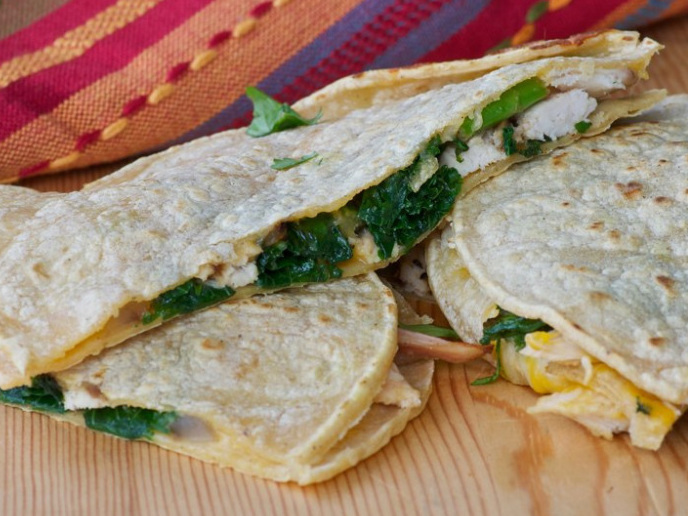 In a large dry skillet over medium-high heat, add a tortilla. Sprinkle with a little cheese, add a small mound of the turkey mixture, top with a little more cheese, then top with another tortilla. Cook for 2 to 3 minutes or until golden underneath. Flip and cook 1 to 2 minutes more. Remove from skillet and cut in half. Repeat. To keep warm, place on a baking sheet and transfer to a preheated oven set at 250 degrees. Serve with guacamole, salsa and sour cream.