Accessibility links
Jason Segel And Nick Stoller: The Men Behind 'The Muppets' The filmmakers behind Forgetting Sarah Marshall have teamed up to create a new Muppet movie. "We set out to make a Muppet movie that harkened back to the late-'70s [and] early-'80s Muppets that we grew up with," says Jason Segel. 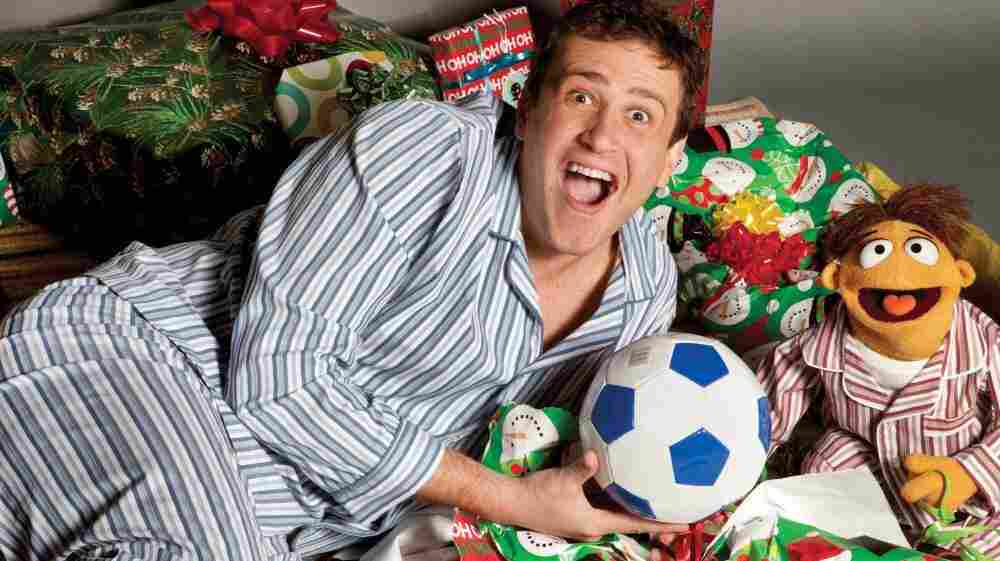 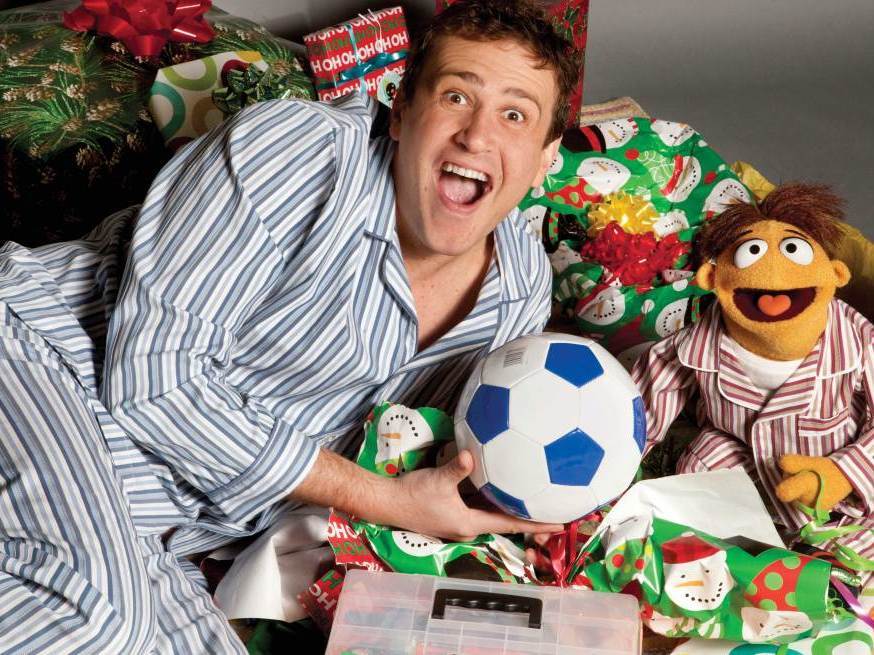 Jason Segel (left) and Walter (voiced by Peter Linz) try to reunite the original Muppets in the new family comedy The Muppets.

Nicholas Stoller made his directorial debut with the raunchy 2008 comedy Forgetting Sarah Marshall, which starred Jason Segel as a guy who had to reassess his life after his girlfriend of five years dumped him.

Segel famously dropped his towel in the opening scenes of the film, which led The New York Times to call him "a young actor with nothing to hide."

The two filmmakers have teamed up once again — this time with Miss Piggy, Gonzo and Fozzie Bear in tow — for the family film The Muppets. Segel tells Terry Gross that the only frontal nudity in this film comes from another star of the movie: Kermit the Frog, who never wears pants.

"In terms of our R-rated past, there's an essential sweetness to what we try to do. And that's not that dissimilar to The Muppets even if in Sarah Marshall there's cursing and nudity," adds Stoller. "We're still trying to get at something that's not cynical."

From 'The Muppets' - 'Let's Try That Lift Again'

From 'The Muppets' - 'We Built This City'

'We Built This City'

From 'The Muppets' - 'You've Been Replaced'

The premise of The Muppets follows three Muppet fans — Segel, Amy Adams and a Muppet named Walter who's voiced by Peter Linz — who want to reunite the Muppet cast and make them as famous as they were back in the day, when movies like The Muppets Take Manhattan and The Great Muppet Caper regularly appeared in theaters.

"We set out to make a Muppet movie that harkened back to the late-'70s, early-'80s Muppets that we grew up with," Segel says. "I had the opportunity to work with my childhood idols, and I wasn't going to take 'no' for an answer. So I set out to make that happen."

Having written a script, Segel and Stoller asked Bret McKenzie, from Flight of the Conchords, to write the lyrics for several original songs featured in the new film.

"We didn't have to tell Bret much in terms of tone, because he's by nature very Muppety," says Segel. "Flight of the Concords is a very Muppety vibe — it's two wide-eyed innocents making their way through a tough New York. So he knew what to do ... right from the start. [And] all the great Muppet movies were musicals."

It's easy to pick up a puppet from a store and make it talk, but to make a puppet look wistful. I don't know how you do that except with years of experience.

The film opens with a grand production number featuring hundreds of cast members singing and dancing down Main Street in a place called Small Town USA. It's campy — but intentionally so, says Stoller.

"The Muppets are always winking, there's a kind of self-referential thing going on, so with a little wink, you can get away with a lot of campiness," he says.

The two filmmakers also turned to another Flight of the Conchords alum — James Bobin — to direct The Muppets.

"As soon as he expressed interest, it was a no-brainer," says Stoller. He explains that Bobin often helped them realize if the scenes they had written were realistic.

"It was easy for us to imagine scenes," he says. "We imagined one scene with 10 full-body Muppets running away from an explosion — and James said that it was impossible. He had to do the heavy lifting."

Once Disney gave Stoller and Segel the green light to make The Muppets, the Muppet puppeteers helped fill them in on the cardinal rules of the Muppet world. For instance, Muppets think of themselves as humans in their world. And they are never, ever mean.

The Muppets: Still Pulling Strings In The Music World

"The Muppets don't get laughs at other people's expense," says Segel. "It's part of what I really loved about the Muppets. They don't even want to destroy their villains. They want to reform their villains."

He points to the first Muppet movie, when the villain Doc Hopper wants to cut off Kermit's legs to make frog legs.

"As opposed to destroying him, Kermit is like, 'Maybe you should think about why you don't have friends. Maybe you're just lonely and you need to be a happier person,' " he says. "The Muppets are pure."

The Muppets are also really honest.

"We had a plot point early on, which was a Willy Wonka-style plot, that [villain] Tex Richman [played by Chris Cooper] was actually Kermit in a human suit," says Stoller. "And he was [just being evil] to get the Muppets back together. And both Disney and the puppeteers told us that kids would never understand that — and that Kermit never lies."

Frank Oz is best known as the original creator and voice behind Miss Piggy and the voice of Cookie Monster, Fozzie Bear and Bert.

Kermit, who's possibly the most famous creation of the late Jim Henson, is performed in the new film by Steve Whitmire, who also does the characters Beaker and Statler. Whitmire is joined by other longtime puppeteers, including Dave Goelz, Bill Barretta and Eric Jacobson, who've all worked with the Muppets for decades.

"You realize what an actual art this is [when you see them,]" says Segel. "It's easy to pick up a puppet from a store and make it talk, but to make a puppet look wistful? I don't know how you do that except with years of experience. ... It's not just a matter of moving your hand open and closed to make the mouth move. Steve [Whitmire] is using all five of his fingers like independent digits ... He's able to go from angry to sad to smiling in very, very subtle ways that I imagine you can only achieve with hours of practice in the mirror."

Both filmmakers stress that The Muppets is a family movie — but that doesn't mean it's been dumbed down in any way.

"I think there's a misconception that a family film has come to mean a children's film, and that's not what it has to be like," says Segel. "The Muppets have an inherent tone that was never going to be dirty or raunchy, though I'm sure some of the executives were nervous that we were doing The Muppets with a sense of irony. But it doesn't take long to realize that we had a pure love for The Muppets."

On the character of Walter, a new muppet who plays Jason Segel's brother in the film

Jason Segel: "The character of Walter is sort of an analogue for me in getting this Muppet movie made. He's a wild Muppet fan who ... he sets out to make them as famous as they once were — which was sort of our goal in making this movie."

If a puppet is sitting on a couch talking, that means there's a puppeteer scrunched into a hollowed-out couch. At the end of the day, you're not supposed to think about the puppeteer. And they're the true geniuses behind this movie.

Jason Segel: "Nick and I are laughing because we legally have — we did not create the look of Walter. We got to create his personality, and he was very sweet, but we could not describe his physical look because then we would have some legal ownership over Walter. So we did not do that."

Jason Segel: "I'm glad you asked what the puppeteer has to do. The sad thing is at the end of the day, their job is to be invisible. You're not supposed to think about the puppeteer. But in reality, these guys are acting, they're puppeteering, they're dancing, they're singing, they're doing improv. A lot of times, they're being contortionists. If a puppet is sitting on a couch talking, that means there's a puppeteer scrunched into a hollowed-out couch. ... They're the true geniuses behind this movie."

Nick Stoller: "I asked Eric Jacobson, who plays Miss Piggy, whether he ever got nervous, and he said no, he never got nervous, but his hand falls asleep and it one time fell asleep on a talk show — like Letterman — and he had to pull his hand out and shake it out."

Jason Segel: "Eric Jacobson plays Fozzie, plays Miss Piggy, plays Animal and a few others. In any other context, that's like a Peter Sellers-esque feat — but it's our job not to even think about that. And so I can't give enough credit to these puppeteers."