Accessibility links
Movie Review - 'Hugo' - A Dazzling 3-D Display Of Movie Magic A young orphan stumbles on a mystery while living in a Paris train station. 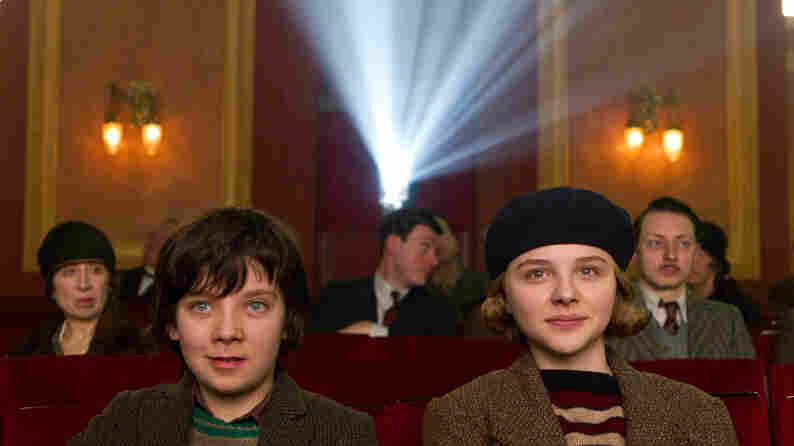 Rated PG; for mild thematic material, some action/peril and smoking

From 'Hugo' - 'Someone Is In Trouble'

'Someone Is In Trouble'

In Hugo, Martin Scorsese has hired himself a bunch of A-plus-list artists and techies, and together they've crafted a deluxe, gargantuan train-set of a movie in which the director and his 3-D camera can whisk and whizz and zig and zag and show off all his expensive toys — and wax lyrical on the magic of movies.

The source is Brian Selznick's illustrated novel The Invention of Hugo Cabret, which takes place in 1930 and centers on an orphaned 12-year-old, played in the film by Asa Butterfield, who lives in a flat in the bowels of the Paris station.

Hugo's drunken uncle, until he went missing, had the job of setting the station's clocks, so now the boy, to cover for the disappearance and stay out of the orphanage, does the job in secret, stealing through tunnels, up rickety ladders and over catwalks, careful to avoid Sacha Baron Cohen's stationmaster with his relish for orphan-catching.

For a while, Hugo's only company is a semi-complete automaton, a kind of primitive mechanical man that his late machinist dad (Jude Law, seen in flashback) discovered in a museum storage area. Hugo thinks the automaton holds the key to his future; alas, the key it doesn't hold is the one that would wind it up and set it in motion.

Scorsese, working from a shapely script by John Logan, is hell-bent on bedazzling us. He and production designer Dante Ferretti pack the screen with clocks and gears and cogs and other round objects that also evoke the film canisters that show up later, when pioneer fantasy filmmaker Georges Melies turns up as a character.

The 3-D cinematography by Robert Richardson is calculated to tickle you, most obviously in shots in which the stationmaster's Doberman pinscher sticks its long snout into your face, but more subtly when the train station is layered with booths and passengers at all kinds of levels, and when overhead shots create odd spatial tensions in the frame, obstacles around which bodies invariably hurtle.

Scorsese has studied the best 3-D films, not just Cameron's Avatar but Hitchcock's Dial M For Murder, and, as far as I'm concerned, redeemed this increasingly tiresome form. Cameron has agreed, calling Hugo at a recent screening a "masterpiece."

I liked the film a lot, but am not so ready to use the "m" word. When Melies appears, the movie becomes a plea for Scorsese's film-preservation cause — which I'm 100 percent behind, but which introduces an element of self-consciousness that pulls the narrative off the rails. 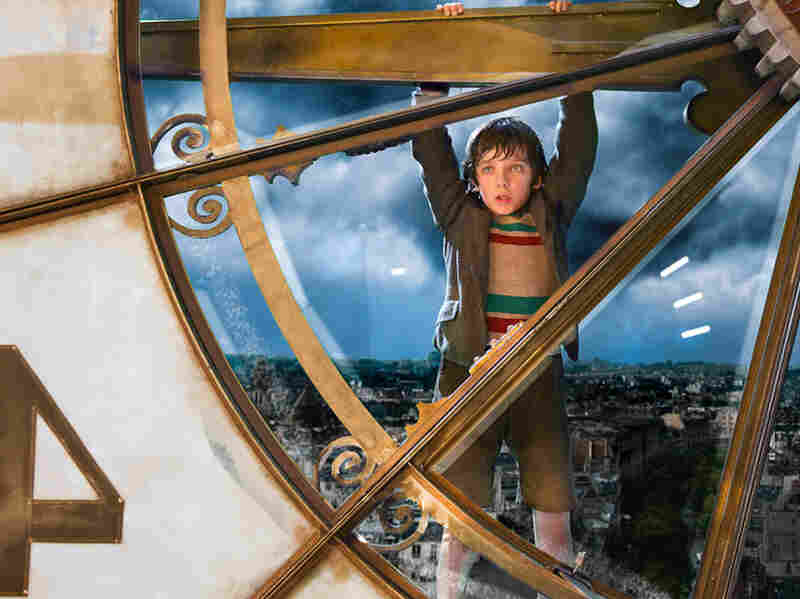 Abandoned by an alcoholic uncle after the death of his father, Hugo services the train station tower clock by day and sleeps in it by night. Jaap Buitendijk/Paramount Pictures hide caption

For all the wizardry on display, Hugo often feels like a film about magic instead of, well, a magical film — something Steven Spielberg has made with his 3-D movie Tintin, opening in December. Wonderful insights into Hugo's mind about the overlap between man and machine get a bit upstaged when he expresses them to his new 13-year-old friend, played by Chloe Grace Moretz.

Those two kids, Butterfield and Moretz, have a wonderful transparency, and the cast is a treat. Baron Cohen finds all kinds of bizarre notes with which to express his ardor for a flower-stand owner (Emily Mortimer), among them a rictus grin that suggests Peter Sellers. That hoary genre veteran Christopher Lee — now Sir Christopher — lends majesty to the role of a librarian, and Michael Stuhlbarg is winningly geeky as an early film scholar.

Ben Kingsley as Moritz's godfather, who runs a toy stand, is mysteriously cold and brittle, even cruel — but when all is revealed, we warm up to him.

At its best, in scenes with the automaton and its Mona Lisa smile, and in an explosive runaway-train nightmare, Scorsese is as deft as Spielberg. When he shows us a famous clock-hanging sequence in Harold Lloyd's Safety Last and tries to replicate it, he's trying too hard. The clips from such Melies wonders as A Trip to the Moon show a delirious unreality that's a world away from Hugo's literal-minded wonders.

But I carp. You must heed the subliminal advertising in the title. YOU GO.