Accessibility links
Tina Brown's Must-Reads: The Columnist's Voice Daily Beast and Newsweek editor Tina Brown explores the work of newspaper columnists through readings that propose a new way of looking at the 2012 election and the scandal at Penn State. 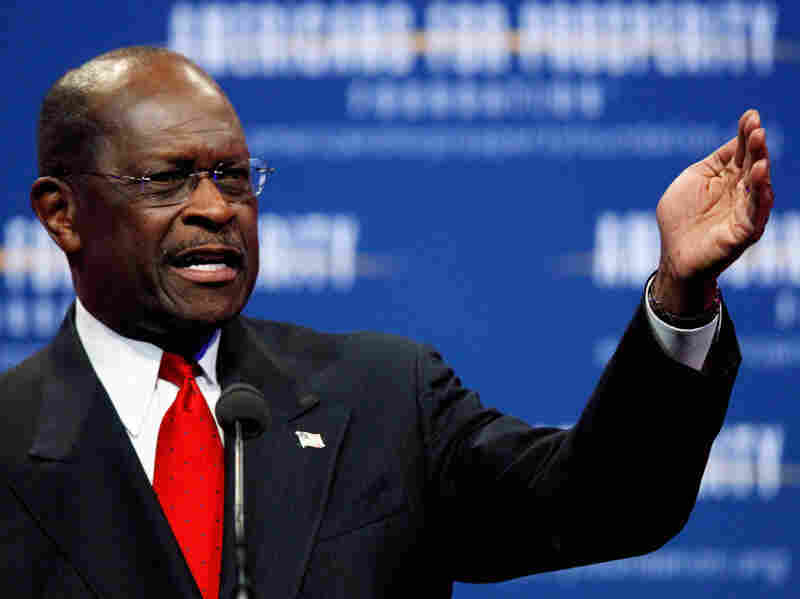 In response to presidential candidate Herman Cain's recent "oops" moment, The Wall Street Journal's Peggy Noonan writes, "To know little and to be proud of knowing little is disrespectful of the democratic process, and of the moment we're in." Chip Somodevilla/Getty Images hide caption 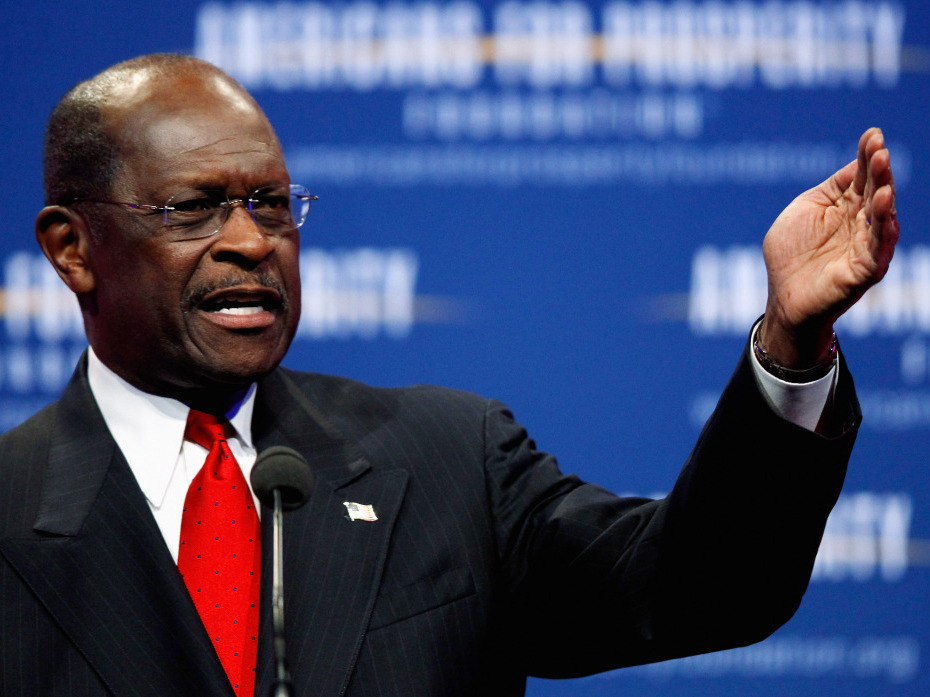 In response to presidential candidate Herman Cain's recent "oops" moment, The Wall Street Journal's Peggy Noonan writes, "To know little and to be proud of knowing little is disrespectful of the democratic process, and of the moment we're in."

Tina Brown, editor of The Daily Beast and Newsweek, tells us what she's been reading in a feature that Morning Edition likes to call Word of Mouth. This month, Brown has been considering the voice of the columnist through readings that provide new perspectives on political issues, moral issues and national events.

'A Caveman Won't Beat A Salesman'

Noonan opens her column with a comment Jobs once made about how great companies decline. She quotes Isaacson's book: "The company does a great job, innovates and becomes a monopoly or close to it in some field, and then the quality of the product becomes less important. The company starts valuing the great salesman, because they're the ones who can move the needle on revenues."

In other words, Brown tells NPR's Steve Inskeep, the salesmen eventually take over — and that's not too different from what happens in American politics.

"Obama in [Noonan's] mind was also a salesman who really didn't understand ... the quality of the product — in [this] case, you know, America," Brown says. "She talks about how Herman Cain is also, therefore, an embarrassment to America because Herman Cain also kind of doesn't respect the product — in this case politics, the democracy, the way the body politic runs."

Noonan writes that Cain showed disrespect for the democratic process when, earlier this month, he had trouble answering questions about Libya during a meeting with the staff of the Milwaukee Journal Sentinel.

Brown says the incident demonstrates a misunderstanding of what it means to run for office; and, according to Noonan, that misunderstanding does a disservice to the GOP by making them look like they're intellectually unfit to govern. Republicans have a right to be skeptical of the powers of government, Noonan argues, but that's no reason to cheer the notion that politicians don't need to know what they're doing, as some candidates and voters have done.

"I think it's a terrific piece, and you'd never expect she would get there from the way she starts," Brown says. "[A] very interesting point of view."

Brooks writes, "The vanity is the outraged reaction of a zillion commentators over the past week, whose indignation is based on the assumption that if they had been in [former Penn State coach] Joe Paterno's shoes, or assistant coach Mike McQueary's shoes, they would have behaved better."

But in reality and in history, Brooks says, that rarely happens — just look at the Holocaust or the Rwandan genocide. He writes:

"Some people simply can't process the horror in front of them. Some people suffer from what the psychologists call normalcy bias. When they find themselves in some unsettling circumstance, they shut down and pretend everything is normal.

"Some people suffer from motivated blindness; they don't see what is not in their interest to see."

So while some may be critical of McQueary — the assistant coach who allegedly saw Sandusky abusing a child in the Penn State locker room — for not doing enough to stop the abuse, Brooks warns that no one can be sure of how they would react if put in his shoes. 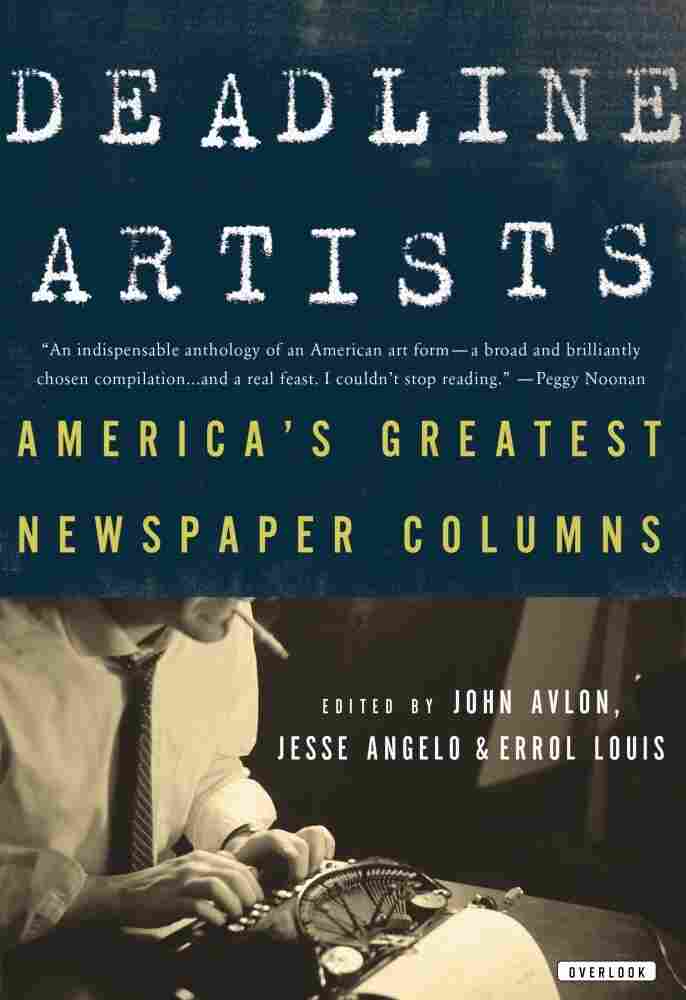 Read An Excerpt From 'Deadline Artists'

"[Brooks] says [McQueary] could have suffered from the normalcy bias that he writes about, or motivated blindness," Brown says. "He also then talks about the bystander effect, and he says, 'So many people do nothing while witnessing ongoing crimes, psychologists have a name for it: the bystander effect. The more people are around to witness the crime, the less likely they are to intervene.' "

Brown's last pick contains the voices of some of the country's most celebrated columnists, including Mike Royko and Jimmy Breslin. Co-edited by Jesse Angelo, Errol Louis and Daily Beast columnist John Avlon, Deadline Artists is a collection of the best newspaper columns from important periods of American history.

"Columnists speak in a voice readers understand — their own, but just a bit better. It is the voice of the bar room, the locker room and the smoke-filled back room. It is a voice that comforts and confronts. A great column is both a witness and a work of art — helping people understand the world around them while making them feel a little less alone."

Angelo, Louis and Avlon write that in the era of fast Internet and punditry, the art of the reported column has become somewhat marginalized; their collection is a way to show the world the value of a good columnist.

"It's really about how they think and their ability to empathize in a unique and interpretive way, in a sense, both with their readers and the culture," Brown says. "You really want to feel that the writer is both absolutely in tune with what's happening in the culture but also has a kind of counterintuitive response to it."

For Brown, Pete Hamill is that writer. In 2001, Hamill wrote in vivid detail about his experience walking the streets of Manhattan on Sept. 11:

"I thought that was a brilliant way of describing it," Brown says. "And he wrote that on a dime. He was writing it in the mayhem of that day — that's what one has to remember."

Brown points out that at the time, there wouldn't have been time to look around at what other people were writing, or to marinate on the column for too long.

"It was simply what he wrote with a pure, pure vision and eyes and heart," she says, "and it reads that way to this day."