Accessibility links
Made In China Doesn't Mean Cheap In China China's reputation as a low-cost manufacturer hasn't translated into low-cost prices. Many goods, particularly luxury items, have higher price tags in China than abroad. One economist blames the transportation system and corruption. 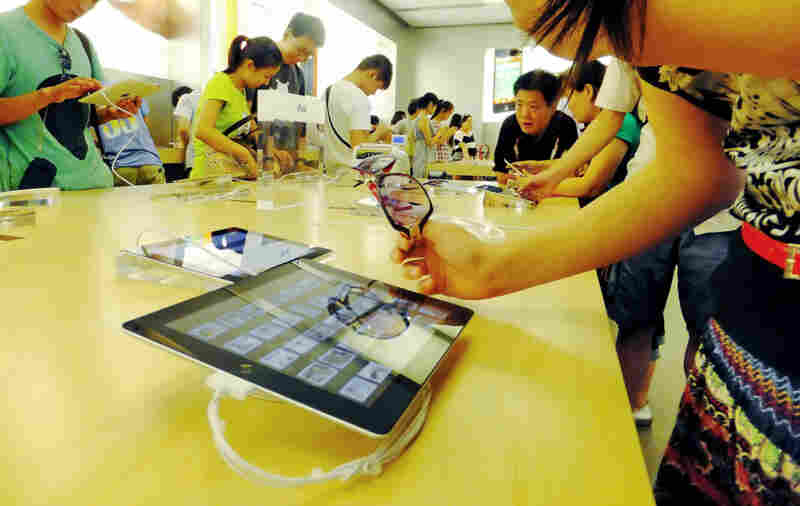 Customers look at iPads at an Apple Store in Shanghai, China. Some goods made in China cost more there than they do abroad. Jing wei/Imaginechina via AP hide caption 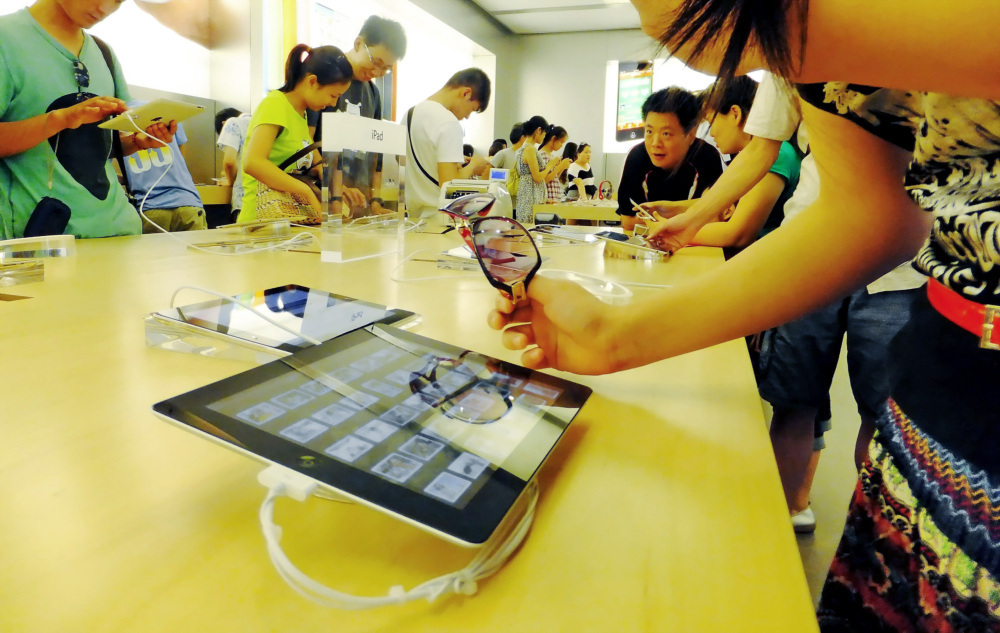 Customers look at iPads at an Apple Store in Shanghai, China. Some goods made in China cost more there than they do abroad.

China has made a fortune producing cheap products that sell for low prices around the world.

Yet many high-end goods manufactured in China –- everything from iPads to Coach bags — actually cost more in China than they do in the United States.

To figure out why, I recently visited a luxury shopping mall in Beijing with Professor Nie Huihua, who teaches economics at the People's University.

We went to the sixth floor of the mall, where Apple products were being sold, including an iPad 2 that was going for $700. The same iPad 2 costs $499 at an Apple store in Washington, D.C.

We then went to a Columbia sportswear store to get some prices. There was a blue backpack, called the Trail Grinder, which wasn't very big and was selling for 1,399 Chinese yuan — or about $220. Back in the U.S., that made-in-China backpack retails for just $139.

Nie says products like this cost more in China because of the country's high transportation fees and local government corruption.

Last year, a trucker in East China's Henan Province was caught using fake military license plates to avoid paying tolls along a 110-mile stretch of road. It's easy to see why: Tolls and fees for a single trip are $230.

"It is impossible for him to make a profit if he pays all the tolls and fees legally," Nie says.

At the high end of the market, there is also a certain, kind of flash-for-cash culture. It doesn't really matter what the price is. The whole point is to be seen to pay and to be able to pay.

"In a market economy, those things will work themselves out," French said. "People will push to reduce those costs. It's just not possible to do that in China. You can buy all the trucks you want. What you can't get rid of is local officials that are on the graft."

Another reason high-end goods cost more here is because China taxes them so much. But in a market loaded with fakes, wealthy Chinese are willing to pay a premium for authentic products they can show off.

"At the high end of the market, there is also a certain, kind of flash-for-cash culture," French said. "It doesn't really matter what the price is. The whole point is to be seen to pay and to be able to pay."

Because of the price differential, many Chinese buy luxury goods when traveling overseas.

On a recent trip to New York, a woman named Ling, who didn't want her full name used, went bargain hunting for a Gucci bag on Fifth Avenue.

Ling, who works for an Internet company, still had to shell out $1,000, but she says she thinks she got a good deal compared to what she would have paid in China.

Like other Chinese, she asks friends traveling abroad to buy items for her, including clothes.

Even inside China, products can sell for very different prices.

Luxury goods are cheaper in Hong Kong, which is part of China but doesn't have a luxury tax. Recently, police nabbed a couple trying to smuggle hundreds of thousand of dollars in merchandise from Hong Kong onto the mainland. The stash included Prada handbags, Cartier jewelry and four iPhones.