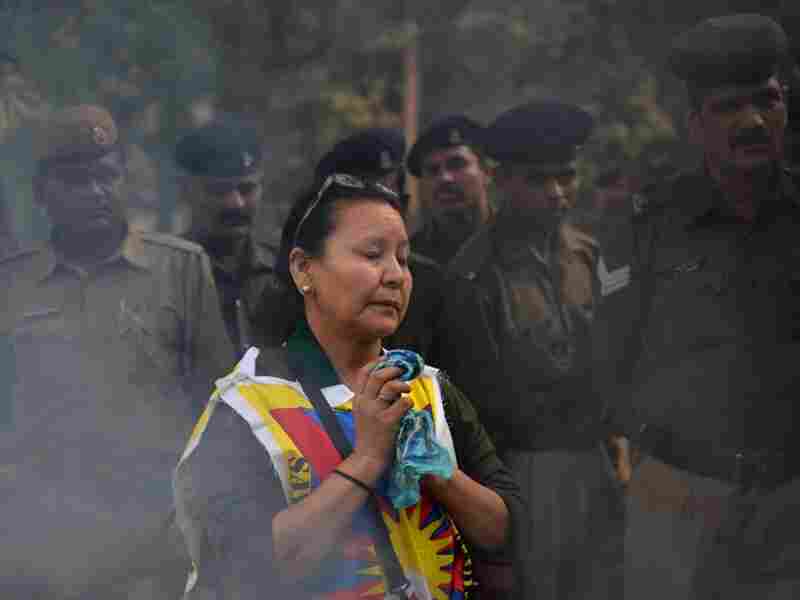 A Tibetan protester takes part in a prayer during an anti-Chinese rally by the Tibetan people's solidarity movement near the Chinese embassy in New Delhi on Nov. 23, 2011. Sajjad Hussain/AFP/Getty Images hide caption 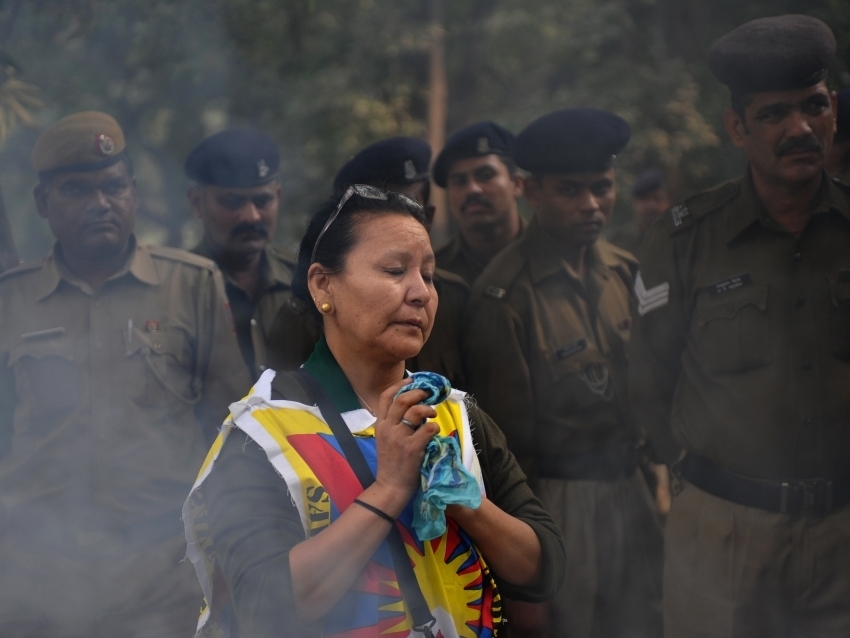 A Tibetan protester takes part in a prayer during an anti-Chinese rally by the Tibetan people's solidarity movement near the Chinese embassy in New Delhi on Nov. 23, 2011.

Read Another Opinion On China

Ellen Bork, director of democracy and human rights at the Foreign Policy Initiative, writes frequently about U.S. policy toward Tibet and China.

After four prime ministers in four years, Nepal might finally be entering a period of stability. On November 1, Nepalese politicians reached a deal on demobilizing nearly 20,000 Maoist fighters who have been in limbo since a 2006 peace agreement ended the ten year insurgency. A second priority, drafting a constitution, may now also be within reach thanks to a compromise on power sharing among the major political parties.

But at the same time, Nepal has become the subject of a high stakes battle for influence between China, which occupies Tibet on Nepal's northern border, and India, which surrounds the country on all other sides. Nepal's current prime minister, Baburam Bhattarai, sent a signal by making his first trip abroad to Delhi last month, and Indian Prime Minister Manmohan Singh will visit next year. But Chinese officials have responded with a full-court press of their own: Kathmandu's Tribhuvan airport has seen a steady stream of Chinese officials, including the head of China's People's Liberation Army, who inked a $20 million military-aid deal with the Nepalese army. Chinese Premier Wen Jiabao, for his part, will visit Nepal in December.

At this stage it's unclear who will prevail in this Sino-Indian struggle for influence, but one issue that is shaping up to be an important bellwether is Nepal's role as a haven and way station for Tibetan refugees. In recent months China has set its sights on closing off this avenue to Tibetans, and it has stepped up the pressure it exerts on Nepal accordingly. India, which provides a home for the Dalai Lama and the democratic, exile government of Tibet, has a strategic stake in seeing Nepal stand up to Chinese pressure. How Nepal responds to China's aggressive new campaign to cut off aid for Tibetans will indicate just how much influence the Chinese have in Kathmandu.

NEPAL'S COMMUNITY OF an estimated 25,000 Tibetan refugees dates mainly from China's conquest of Tibet in the 1950s. Some are resistance fighters or their descendants. New refugees no longer settle in Nepal, but under the 1990 "Gentleman's Agreement" between the Nepalese government and the UN High Commission on Refugees (UNHCR), Tibetans who make it across the mountainous frontier—anywhere from a few hundred to a few thousand each year—are brought to the capital, Kathmandu, several hours away by car. Once there, they are documented and quickly sent on to India. Nepal has been a part of the escape path for numerous important Tibetans, including the Karmapa Lama, a young, charismatic monk who fled Tibet in a dramatic escape in 1999 when he was 14 years old. Some hope he will assume an important leadership role in the Tibetan cause when the current Dalai Lama, now 76, dies.

Since 2008, when widespread protests erupted inside Tibet, China has escalated its demands that other countries defer to its claim on Tibet as a "core interest." In most places, that means denying the Dalai Lama official meetings, or even a visa, and certainly not according any respect to the democratically-elected head of the Tibetan government-in-exile, Lobsang Sangay. In Nepal, however, Beijing is going even further.

The extent of Chinese activities in Nepal is hard to measure, but a cable from the U.S. Embassy in New Delhi, released by Wikileaks, described Chinese bribes to Nepalese police to hand back Tibetan refugees who had successfully made it across the border. China also has an extensive police training program in Nepal, and in June 2010, the UNHCR documented the forcible return of three Tibetans to Tibet by Nepalese police; two were later reported to have been jailed inside China. However, the number of Tibetans being forcibly repatriated could be much higher. "No one knows what's going on in the border [area]," says a Tibetan analyst based in Kathmandu who asked not to be named due to the sensitivity of the situation. The UNHCR stopped conducting border monitoring missions in 2009, according to a report by the International Campaign for Tibet.

China's diplomacy on the issue, meanwhile, is increasingly brazen. In August, the Chinese embassy in Kathmandu delivered a formal and unprecedented diplomatic note demanding the return of 23 refugees who had reached Nepal's territory. The note alleged that 20 refugees of minor age had been trafficked. In fact, young refugees unaccompanied by adults are not uncommon, often because parents have decided that repression inside Tibet is intolerable, their children are unable to obtain a decent Tibetan education, and it is too risky, or too expensive, to send an adult with them. Implausibly, the Chinese note claimed, "the families of the 20 boys and girls are sincerely requesting ... to send them back so the intactness of their families could be restored and human rights of the Tibetan people could be effectively protected."

The Chinese effort failed—at least this time. After an international outcry and a habeas corpus petition filed by the Human Rights Organization of Nepal (HURON), a judge on Nepal's Supreme Court ordered the refugees released and allowed to leave for India. But the episode revealed the shakiness of Nepal's Gentleman's Agreement with the UNHCR, as well as the fact that even after entering Nepal's territory, Tibetan refugees are not safe: During the month they spent in Nepal's immigration detention, the refugees were visited by Chinese officials, according to a source who aids refugees in Kathmandu and worked on the matter.

Continue reading at The New Republic.