Accessibility links
U.S. Easing Out Of Nation-Building Business The difficulty and expense associated with nation-building in Iraq and Afghanistan has made the notion of nation-building unpopular with Democrats and Republicans alike. But throughout U.S. history, the idea has always staged a comeback.

U.S. Easing Out Of Nation-Building Business

U.S. Easing Out Of Nation-Building Business 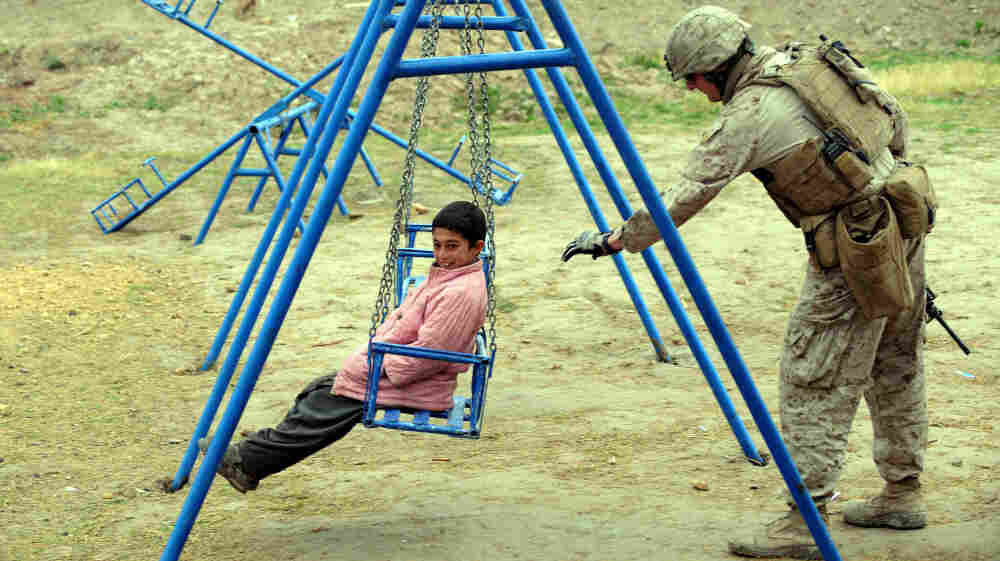 A U.S. Marine pushes a child on a swing in southern Afghanistan on March 4. After a decade of nation-building in Afghanistan, and nearly as long in Iraq, the U.S. appears to be losing it appetite for such efforts. Adek Berry/AFP/Getty Images hide caption 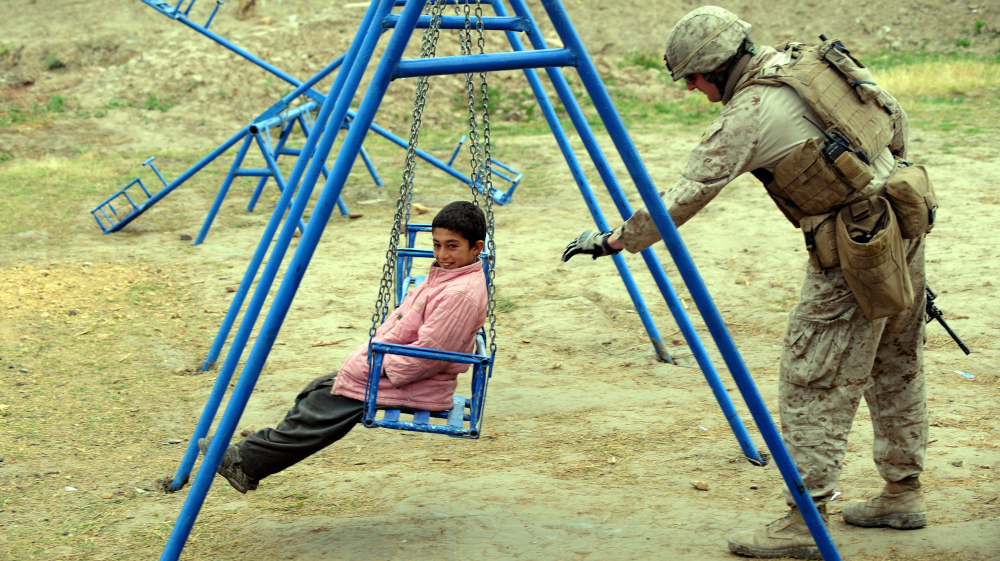 A U.S. Marine pushes a child on a swing in southern Afghanistan on March 4. After a decade of nation-building in Afghanistan, and nearly as long in Iraq, the U.S. appears to be losing it appetite for such efforts.

Nation-building has gone out of style.

The U.S. effort in Afghanistan has lasted a decade, and it's been nearly as long in Iraq. Now, there's little appetite in American political circles for large-scale attempts to build up the economies or political institutions of other countries.

Most U.S. troops will be pulled out of Iraq by the end of the year. And the Obama administration has been careful not to take on responsibility for rebuilding Libya after the NATO bombing campaign that helped drive Moammar Gadhafi from power.

Given the federal government's budget problems, skepticism about nation-building has become bipartisan. At Tuesday's GOP presidential debate on national security, several candidates expressed doubts about foreign assistance in general and nation-building in particular.

"We have spent $1.4 trillion in Iraq and Afghanistan," says Micah Zenko, a fellow at the Council on Foreign Relations. "There's just not support for the U.S. to take the lead on anything huge anytime soon."

The concept may have gone out of fashion, but that doesn't mean it will remain dormant forever. Nation-building has been a recurrent feature of American foreign policy throughout U.S. history, University of Texas historian Jeremi Suri writes in his new book Liberty's Surest Guardian: American Nation-Building From the Founders to Obama.

We have spent $1.4 trillion in Iraq and Afghanistan. There's just not support for the U.S. to take the lead on anything huge anytime soon.

Micah Zenko of the Council on Foreign Relations

Nation-building is about more than trying to strengthen civic institutions or promote economic development in another country, Suri argues. It has to do with creating a sense of national identity and purpose that transcends divisions along racial, ethnic or sectarian lines.

The American view of nationhood has to do with a set of values — such as free markets and democracy, as opposed to the European notion that nations are defined by ethnicity and territory — what Germans call Blut und Boden, or blood and soil.

In that sense, the U.S. sometimes seeks to have its own experience mirrored in other places. And for that reason, nation-building is something built into America's political DNA, suggests Odd Arne Westad, a professor of international history at the London School of Economics.

"It has to do with values that are universal — that are not just feasible in the U.S.," Westad says. "That is one reason for the United States trying to get these things to rise in other countries."

There has been a debate throughout American history over whether the U.S. should promote its values abroad through active engagement, including nation-building efforts, or tend more to domestic affairs so as to provide a bright example for other nations to follow. At Tuesday's GOP debate, former Pennsylvania Sen. Rick Santorum repeatedly invoked the latter idea, saying America should be a "shining city on the hill."

"We forget sometimes that we have a name brand in this world and I have seen it shine, living overseas," former Utah Gov. Jon Huntsman, a former ambassador to China, said at the debate. "And when our light shines based on the values that we live up to and represent, it moves people, it moves countries, it moves events like nothing else can."

But nation-building has to do not only with the positive promotion of values overseas, Suri says, but also fear. When the U.S. has felt threatened by terrorism, communism and earlier challenges, it has turned to nation-building efforts as part of its strategic hardware.

"Nation-building is the core way of thinking for Americans when we're confronted by threats and areas [of the world] that are causing us harm," Suri says.

Perennial Part Of The Tool Kit

For that reason, the desire to engage in nation-building sometimes recedes, as it appears to be doing currently, but it never goes away entirely. 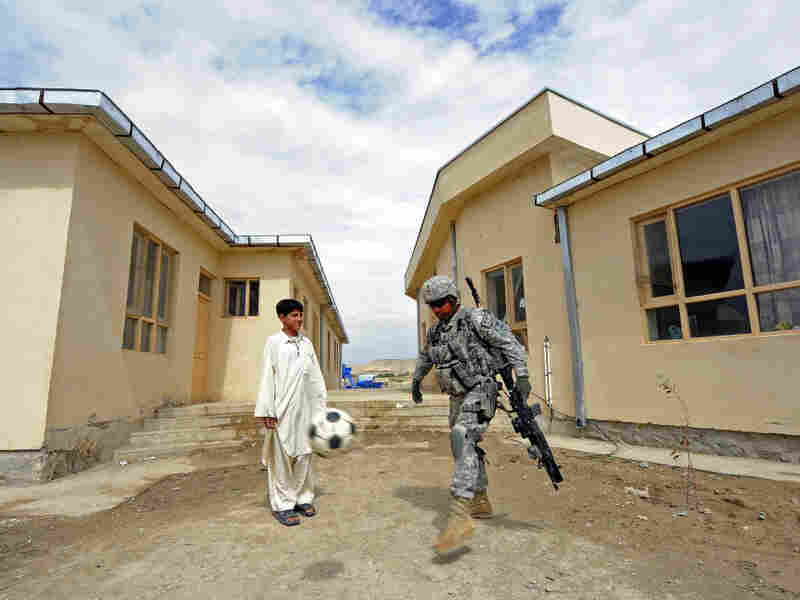 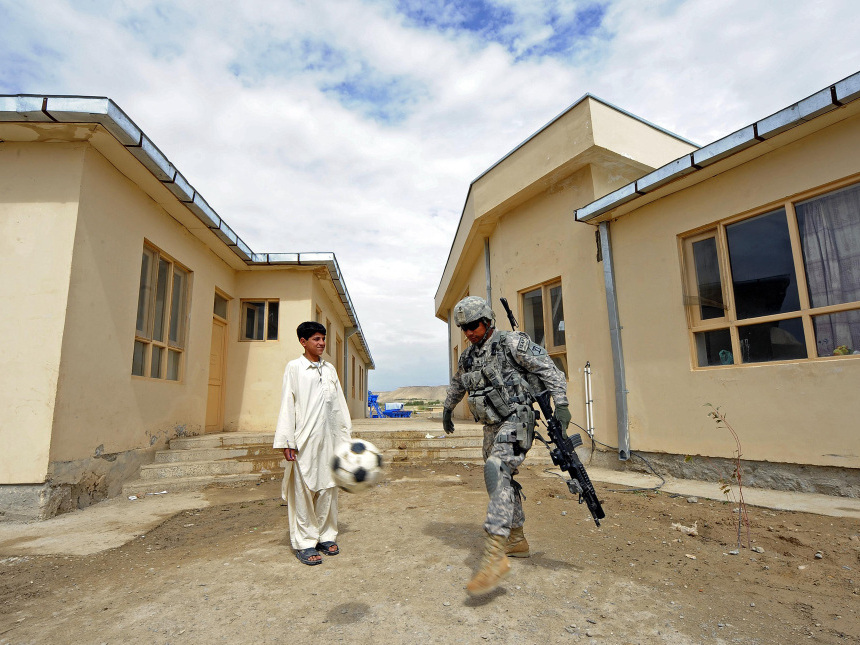 U.S. Army Sgt. Johnny Hoyos plays soccer with an Afghan boy at a school in Qalat, Afghanistan on April 16 in Qalat. U.S. troops were visiting to assess the facilities for a renovation project.

In the wake of the U.S. engagements in places like Somalia, Bosnia and Kosovo, George W. Bush ran for president in 2000 on a platform that specifically disavowed nation-building. Yet the concept became central to his response to the terrorist attacks of Sept. 11, 2001.

"Bush came in denying it and then embraced it, and it became a pillar of his foreign policy," says David Ekbladh, a Tufts University historian. "It's one thing that's always there in our tool kit, no matter how much we deny it."

With defense and foreign aid spending under significant pressure, the U.S. may not take the lead anytime soon on a new, bilateral nation-building effort. European allies, who are also in financial straits, will not be eager to try rebuilding or reshaping other countries, either.

But the U.S. will continue its efforts to influence the economic and political courses of other countries. "We do nation-building but we don't call it that — we call it capacity building," says Zenko, the Council on Foreign Relations fellow.

George Washington warned against foreign entanglements, and many in Congress today seem to share that concern. President Obama's decision last month to send 100 troops to Uganda to help combat the Lord's Resistance Army, a guerrilla force, came in for heated questioning.

The U.S. may turn increasingly to international organizations, including the United Nations, the Organization of American States and the African Union, to take the lead on nation-building or capacity-building projects, Zenko suggests.

"The leading from behind, as much as people don't like it because it appears that America doesn't have sovereignty, is the future," Zenko says.

Suri's book says that the idea of nation-building may encounter periods of retrenchment, but it always makes a comeback.

Analysts don't expect either Obama in his second term or any Republican who might be elected next year to actively seek opportunities to engage in nation-building.

But even leaders who don't like the idea have sometimes been driven by events to embrace it, says Alan Kuperman, a public affairs professor at the University of Texas.

The desire to stabilize a hostile country quickly gives rise to all sorts of issues regarding development and other issues.

"If you'd asked Dick Cheney on Sept. 10, 2001, if he supported nation-building, he would have said, 'Are you on crack?'" Kuperman says. "But all of a sudden, he became a big nation-builder."