Accessibility links
Robert Johnson And Pablo Casals' Game-Changers Turn 75 Two hugely important recordings, made by pivotal musicians an ocean apart, were made on the same day in 1936. 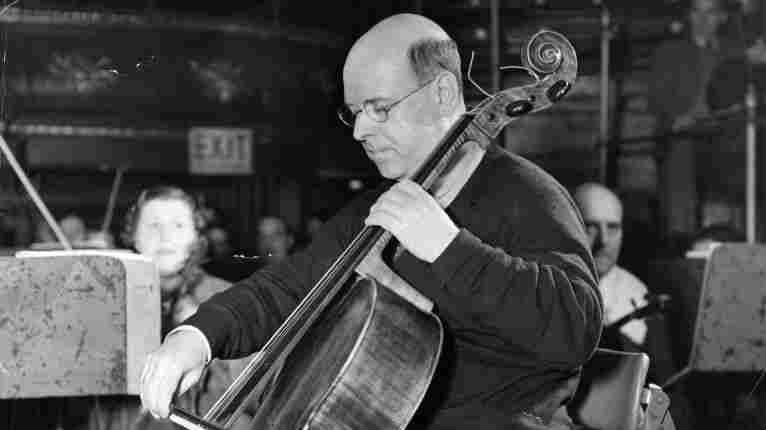 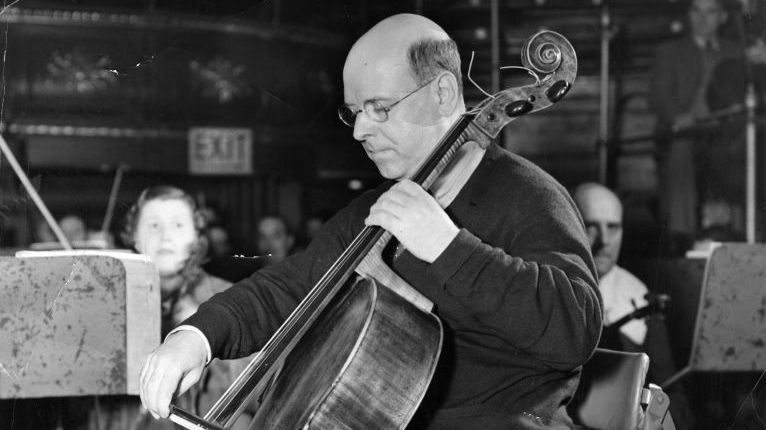 Spanish musician and composer Pablo Casals, playing the cello in 1936.

Johnson And Casals, Together At Last

Hear a mix of two recordings made on November 23, 1936, put together by Brendan Baker for Radio Diaries.

Nov. 23, 1936, was a good day for recorded music. Two men, an ocean apart, each stepped up to a microphone and began to play. One was a cello prodigy who had performed for the queen of Spain; the other was a guitar player in the juke joints of the Mississippi Delta. But on that day, Pablo Casals and Robert Johnson each made recordings that would change music history.

Honeyboy Edwards, who died this year, not long after being interviewed for this story, says he first met Robert Johnson in those juke joints: "He wasn't famous then," Edwards says. "He was just a quiet man who played guitar."

75 years ago, Johnson walked into the Gunter Hotel in San Antonio, Texas. He had been brought there by Ernie Oertle, an executive with the American Record Company, which had refashioned a hotel room into a makeshift studio. The company had brought people from all over the country to record, and the range of artists in the hotel that day was startling. Blues musician and writer Scott Ainslie lists them: "Gospel musicians, polka bands, string bands."

"Johnson's session was sandwiched between a hillbilly band and a group of sisters who played Spanish guitar music," Ainslie says. Johnson walked into the recording room and settled down, facing into a corner. He tuned up his guitar and began to play.

Come on in My Kitchen

Billy Gibbons, the guitarist for ZZ Top, is a big fan of the recordings Johnson made that day. He says he's particularly impressed by the way Johnson's hands struck the strings of his guitar.

"This was just one guy, " he says. "Meat on metal on wood. But what he came with was fierce."

Johnson was playing walk-downs, turnarounds, a thumping boogie-woogie piano bass line and chiming high chords on top — all by himself. "Where other guitarists might need a drummer and a bass player," says Ainslie, "Johnson figured out how to do it all.

"He had mastered a way of playing that went far beyond what anyone else was doing in the Delta at that time," Gibbons says. "It was downright befuddling."

"He had mastered a way of playing that went far beyond what anyone else was doing in the Delta at that time. It was downright befuddling."

That expert playing — and the speed with which he developed his style — helped lay the groundwork for the later iconic myth: Johnson met the devil at the crossroads and sold his soul to play guitar.

Johnson also knew how to put together a song. His recordings were done on wax discs, three minutes per side. Some earlier blues performers went into recording sessions and recorded a slice of a live performance meant to go on for 12 minutes — only to have the recording cut off partway through because they'd run out of wax.

According to Ainslie, Johnson had listened to a lot of 78s. He knew how long a record was. So he crafted his songs with tighter lyrics and narrative structure, and a greater sense of telling a story. As author Paul Elie says, "In three minutes, Robert Johnson can sketch these incredible dramas of sin and redemption, struggle and loss, and you feel a world being drawn before your eyes."

Meanwhile, Across The Atlantic

That same day, Pablo Casals walked into Abbey Road Studios in London. Abbey Road was one of the most advanced studios in the world at the time. It had the air of a hospital — technicians in white lab coats, the equipment stainless and polished.

Casals was 60 years old. He'd discovered Bach's cello suites as a boy in Barcelona, in an old music store, and had been amazed that he had never heard of them before. At that time, the suites weren't thought of as great works of music, or worthy of performance — they were too methodical, too logical, too cold. Cellists considered them exercises, a way to learn to play the cello better. But to Casals, they were music of the highest order.

Bernard Greenhouse (who also died this year, shortly after being interviewed) studied with Casals in Spain. He says that Casals was able to find something in the suites that no other musician had found before.

"He's the one who made it into a language," Greenhouse says, "and that's what music is: a language which transcends all people and all parts of the world. A language which is almost understandable word for word."

Johnson recorded again later that week, and then a final time in 1937 in Dallas. He had one minor hit with "Terraplane Blues," but his impact was largely regional and confined to the Delta. The American Record Company wanted to record him again, but Johnson was killed in 1938 — poisoned, allegedly, by the husband of a woman with whom he'd been having an affair. Johnson's recordings, and Johnson himself, were pretty much forgotten.

Meanwhile, Casals became more famous then ever. He played at the White House, became a darling of the Kennedy administration and died in his 90s, a beloved figure in classical music. But if there was one recording for which he was known, it was his Bach cello suites.

In 1961, the first reissue of Robert Johnson's recordings came out on Columbia Records. "Everybody stopped in their tracks," Gibbons says. Johnson's songs were covered by Eric Clapton, Fleetwood Mac, The Rolling Stones, Led Zeppelin and a host of other artists.

His influence went beyond covers, though; it actually changed the way rock was played. Gibbons says that ZZ Top's "La Grange" was influenced by Johnson's work, especially its iconic turnaround line.

"But as many times as a Robert Johnson number has been covered and rerecorded and reinterpreted, no one has yet recaptured what guitar players would refer to as that internal DNA of Robert Johnson," Gibbons says. "You can get the same guitar, you can probably go back to the same hotel room, but delivering it like R.J. did in 1936 — forget about it. It's not going to happen."

Produced for All Things Considered by Joe Richman and Samara Freemark of Radio Diaries with editors Deborah George and Ben Shapiro.