Accessibility links
The Newest Magazine Fad: The Mug Shot Tabloid The tabloids — with names such as Cellmates, Jailbirds, Just Busted — show mug shots of those arrested every week in different cities around the country. In Little Rock, Ark., The Slammer sells some 7,000 copies a week. But law enforcement says it doesn't help solve crimes — and others call it voyeuristic and exploitative.

A new kind of tabloid is popping up in convenience stores around the country. The papers are nothing more than a compendium of mug shots letting readers keep up with who's been arrested every week.

With titles like Cellmates, Jailbirds, Just Busted, Jail House Rocs and The Slammer, it's clear what you'll find inside.

"Modern-day stockades or stocks, I guess is one way to look at it," says Daniel Schroeder, publisher of The Slammer, which covers central Arkansas.

"The crazier the mug shot, or the meaner looking the people are, the more likely they are to end up on the cover," he says.

A Sense Of Voyeurism

In the pre-dawn hours at a nondescript self-storage unit, Schroeder loads stacks of his tabloid into the car trunks of his drivers. They'll fan out over Little Rock and the surrounding counties, taking papers to some 300 gas marts and convenience stores. Like the other papers that have been growing in popularity around the South, the paper follows a template — page after page of local mug shots, interspersed with a few short crime articles from around the country. The advertisements are mostly for cash advance outlets, bail bondsmen and defense attorneys. 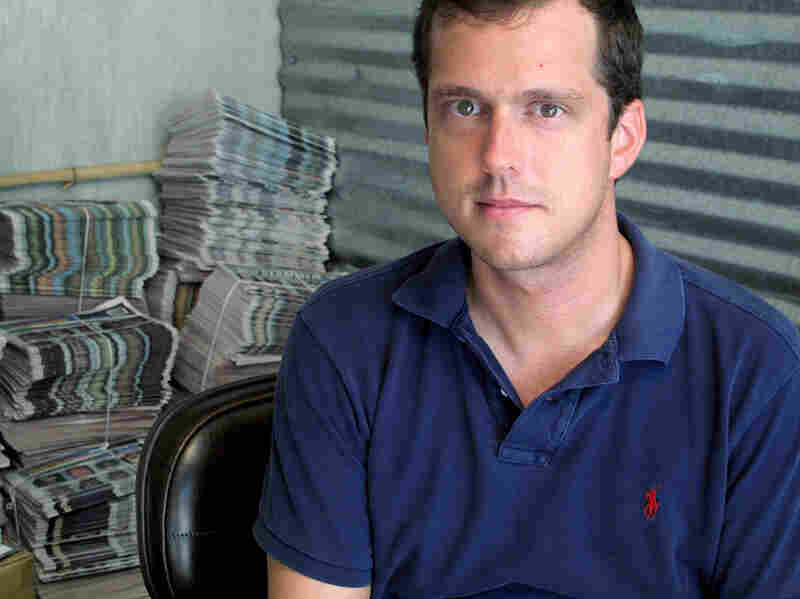 Daniel Schroeder, publisher of The Slammer, admits it's a sense of voyeurism that sells the papers, but he says they also help law enforcement. Debbie Elliott/NPR hide caption

Schroeder explains how the mug shots are grouped under kitschy headlines.

"This is the wrinkly rascal section — people a little older that were arrested [whom] you wouldn't expect to see in there," he says. "They can be sweet-looking grandmas and grandpas sometimes. One of my favorites — and a lot of people like — is the hairdo's and don'ts. People are not always at their best when they get arrested."

At the Pulaski County jail, Deputy Charles Wilkes does intake. He snaps the photos of inmates that eventually end up in the tabloid.

"They know about The Slammer," he says. "Sometimes they think its kind of funny like, 'Hey, I'm posing for The Slammer,' and some people are like, you know, 'I'm pretty upset cause I might lose my job.' "

It doesn't serve any purpose. It's just someone exploiting, making a buck off of other people's miseries.

Schroeder admits it's a sense of voyeurism that sells the papers, but he claims they also help law enforcement.

"Most people look at this because they're curious and they want to gawk and gossip a little bit," he says. "But there's a good side to it to that provides people with an opportunity to see maybe somebody that they know has committed a crime, or somebody — might be a victim of a crime — is able to see the person that committed the crime if they haven't been caught already."

This is the third episode of Southword, a multimedia collaboration between Oxford American magazine and NPR spotlighting the people, places and trends that shape the modern American South. Dave Anderson, filmmaker for Oxford American, teams up with NPR journalists to produce stories about a region that continues to evolve in unexpected ways.

"I'm not sure we've seen a great upside for us, other than people call us and complain about their picture being there," he says.

Holladay says it just creates more work for his deputies. At first, he resisted providing the county's mug shots to The Slammer, but he says he had no choice because of sunshine laws.

The paper runs a disclaimer: "Not every arrest leads to a conviction. All suspects are innocent until proven guilty in a court of law."

That doesn't make Mario Montemayor, 17, feel any better. He was charged as an adult for allegedly buying OxyContin from an undercover cop, with the intent to sell the pills.

"I felt embarrassed because everyone seen all my charges and everything," Montemayor says. "Some things need to be private."

He says all his friends pick up The Slammer at gas stations around town. It costs only a dollar.

Right Or Wrong, They're Profitable

At a Raceway convenience store on a busy intersection in Little Rock, new copies of The Slammer sit out on the counter right by the cash register.

"[They're] pretty popular — yeah, we pretty much sell out almost every week," says Alfred Walker, the store manager. "When it first came out, a lot of people didn't like The Slammer because they thought it was very negative. But now a lot of people just want to buy it just to see who's in there."

Customer Shawn Rycraw owns a car detail business in the neighborhood. He comes every Thursday when the new papers are stocked.

This week, Rycraw is looking for a former employee.

Not everyone is such a fan of The Slammer.

Russell Carpenter of Little Rock doesn't think the store should sell the papers.

"I think it's like exploiting criminality to me," he says. "It doesn't serve any purpose. It's just someone exploiting, making a buck off of other people's miseries."

Right or wrong, the mug shot tabloids do appear to be profitable. Each week, Little Rock residents snap up some 7,000 copies of The Slammer.