Accessibility links
Could Gingrich Immigration Stance Be Shrewd Move? The presidential candidate is getting lots of attention for his remarks about immigration in the latest GOP debate. But his statements are actually in line with the positions of Republicans from years past — Ronald Reagan included — and may help attract Latino votes. 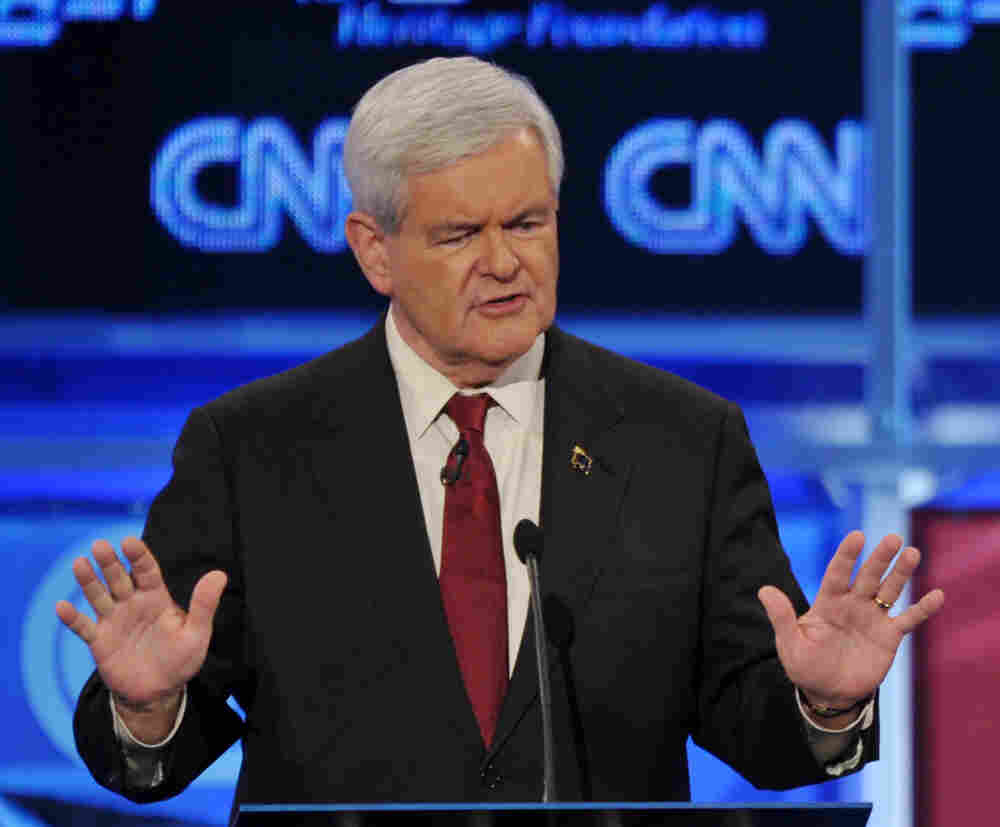 Republican presidential candidate Newt Gingrich is getting lots of attention for his remarks about immigration in Tuesday's debate. Gingrich, who has been moving up in the polls, broke with his fellow candidates by saying that some illegal immigrants should be allowed to stay in the United States.

Though his statements were in line with other GOP candidates from years past, the aftershocks show just how narrow the immigration debate has been in recent years.

At first, Gingrich spouted the typical Tea Party-era Republican line: "If you've come here recently you have no ties to this country, you oughta go home, period," he said before an audience in Washington, D.C.

But his next statement was what raised eyebrows.

"If you've been here 25 years, and you got three kids and two grandkids, you've been paying taxes and obeying the law, you belong to a local church, I don't think were gonna separate you from your family, uproot you forcefully, and kick you out," Gingrich said.

That got a lot of pushback from Gingrich's fellow candidates, and a lot of post-debate attention. But his statement is not radical by traditional Republican standards.

"This is a position that's consistent with what an important element in the Republican Party has believed and argued for, for a long time," says Doris Meissner, a senior fellow with the bipartisan Migration Policy Institute in Washington, D.C., and head of the Immigration and Naturalization Service under President Clinton.

At GOP Security Debate, Gingrich's Tolerance On Immigration Stands Out

Meissner says up until the past few years, Gingrich's was the mainstream view held "by centrists, by people who have represented business and employers, and more internationally oriented views within the Republican Party."

Meissner is describing people like President George W. Bush and Arizona Sen. John McCain — both of whom pushed legislation to legalize some illegal immigrants and create a guest-worker program. That effort failed as Republicans became focused on border security. That led to enforcement-only legislation in Congress and Republican-led state laws intended to crack down on illegal immigration in states like Arizona and Alabama.

"To [say] that we're gonna say to the people who've come here illegally that now you're all gonna get to stay or some large number are gonna get to stay and become permanent residents of the United States, that will only encourage more people to do the same thing," Romney said.

That argument is based on what happened after Ronald Reagan granted amnesty to 3 million illegal immigrants in 1986, a move Gingrich supported while in Congress. Since then, many more people have come to the U.S. illegally.

But in the past decade, the U.S. also built some 700 miles of fencing, added roughly 20,000 Border Patrol agents and put in place drones, sensors and other technology. Fewer people are crossing the border illegally.

And the Obama administration is deporting record numbers of people already here. With those facts in mind, Gingrich seems to be taking a calculated step, talking not just about guns and fences, but about families.

"As somebody who believes strongly in family, you're going to have a hard time explaining why that particular subset is being broken up and forced to leave given the fact that they've been law-abiding citizens for the last 25 years," Gingrich said at the debate.

Gingrich was not pressed on the specifics of his proposal. But Meissner says, regardless, his remarks are shrewd politically.

"The Republican Party in its very harsh and unyielding recent stance on illegal immigration has alienated itself from the single-largest bloc of voters that are in play in the future in our political system, and that is Latino, Hispanic voters."

At the very least, Gingrich is differentiating himself from his fellow Republican candidates. And he may help his party in the long run, if not himself, by broadening the immigration issue after several years of narrowing.