Accessibility links
New 'Risk' Board Game Remembers Where You Left Off Why do board games always have to start over from the beginning? Well, maybe they don't. Hasbro has tweaked the classic world domination board game Risk so that it's more of an ongoing narrative. Gamers are intrigued, if a little skeptical. 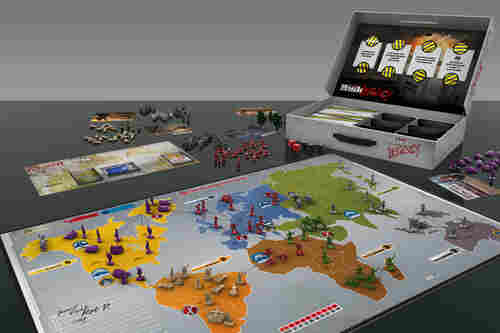 When you sit down to play Risk: Legacy, you're not starting from scratch — the game refers back to previous matches. Hasbro game designer Rob Daviau says the new version of Risk plays around "with the assumptions of what a board game should and shouldn't be." Hasbro hide caption

This Thanksgiving week, many families will spend time together playing a board game or two. It's one of the oldest forms of entertainment, but there's still room for innovation — and a new board game in stores this season is shaking things up.

Whether you're playing Scrabble, Monopoly or Cranium, these games all have something in common that's not so obvious — and Rob Daviau, a game designer at Hasbro, figured it out. A few years ago, he was testing a new version of Clue. Playing it over and over again, he found that, just by chance, the same character kept coming up as the killer. So he wondered aloud: "I don't know why they keep inviting Mustard back. He's killed three people in a row."

And that got him thinking: "Why do board games always start over?" Daviau says. "They have no memory — it's like Groundhog Day. What if there was a way to make a board game sort of remember one game to the next, so it became an ongoing narrative rather than a series of isolated events?"

Video games already do this — we take that for granted. But for board games, this is uncharted territory. So Daviau decided to take this concept and apply it to another Hasbro classic: Risk.

The board is a map of the world, and each player gets a little plastic army. Players strategically move their troops across continents and roll dice in an effort to defeat their opponents.

Daviau's new version of the game is called Risk: Legacy. What makes this different from the original Risk is that choices you make change the game permanently. For example, a player building a city can name it whatever he or she wants. The name gets written in permanent marker on a label, which gets stuck to the board — and it stays there. You could try to pull it off, but you'd ruin both the sticker and the board. So in every game after this, whoever first controlled the city gets a bonus -- forever.

More On Board Games

At other times, players do destroy parts of the game. After certain events take place, players are instructed to open secret envelopes containing new components that change the way the game is played. At other times, players are instructed to literally rip up game cards and throw them away. That's hard for the true board game aficionados out there. When Risk: Legacy was announced, discussion on the hardcore board gamer website Board Game Geek was heated. Some thought the idea was genius, others were cautiously intrigued.

"I'm very careful with my games," says game lover Brad Minnigh. "So it's going to be hard for me to rip cards in half and throw away stuff."

Others were strongly against it. Walter O'Hara says he posted a comment calling the update of the classic game a "cynical money grab by Hasbro," and asked, "Do they think we're total morons?"

It's true, the game can't be reset. So if you want to start fresh, you need to buy a new copy — and this game costs more than $50. Daviau has heard this criticism before.

"If this was a real plan to get people to buy more board games, it probably wouldn't be in a Risk game that's being sold in the hobby markets," Daviau says. "This was really, start to finish, just a design project ... to play around with the assumptions of what a board game should and shouldn't be."

Risk: Legacy will be in specialty game stores and online — just in time to be ripped up and written over during the holidays.