Accessibility links
Asking For Quiet: How To Defuse Thanksgiving Spats Thanksgiving offers a chance to connect with family and enjoy a relaxing meal. But that doesn't always happen — especially when political arguments break out. We asked our Facebook friends to share their stories, and the responses came rolling in. Then we got advice from a member of Congress.

When families get together for Thanksgiving, spirited discussions can sometimes break out at the table. Vanda Grigorovic/iStockphoto.com hide caption

The Thanksgiving holiday offers a chance to connect with family and enjoy a relaxing meal. But it doesn't always happen that way — especially when political arguments break out at the table. We asked our audience to share their stories on NPR's Facebook page, and the responses came rolling in.

Stef Work echoed the sentiment of many, saying, "I don't think I am alone when I find the visits too long and the social graces too few."

And Kat Burdick wrote: "My parents are Catholic, Republican, Penn State alums. This year at Thanksgiving, we'll feature six straight hours of talking about the cats."

To help navigate the rocky waters of politics and family, we consulted a member of what some consider America's biggest and most dysfunctional family: Congress.

Rep. Shelley Moore Capito, a West Virginia Republican, is the co-founder of the House Civility Caucus, a group she began along with Democratic Rep. Emanuel Cleaver of Missouri, "to try to bring to Congress respectful and civil debate," she tells NPR's Steve Inskeep.

"I think we both recognize that the language, the disrespect and the volume is too high, and too cutting," Capito says. "So we're trying to reach across the aisle; we've had a couple of breakfasts, to just get to know each another a little bit better."

To draw on that experience, we asked Capito if she had any advice for Dawn Halloren, from Burbank, Calif. At a gathering one year, her sister's boyfriend almost came to blows with her father. They were arguing about labor unions.

"My mother was trying desperately to change the subject and turn things in a more neutral direction. But she was completely unsuccessful — because once my father dug his teeth in, there was no going back.

"And then eventually, in pretty typical fashion, we all just sort of pretended it didn't happen and went on with dinner. The tension lingered for quite some time." 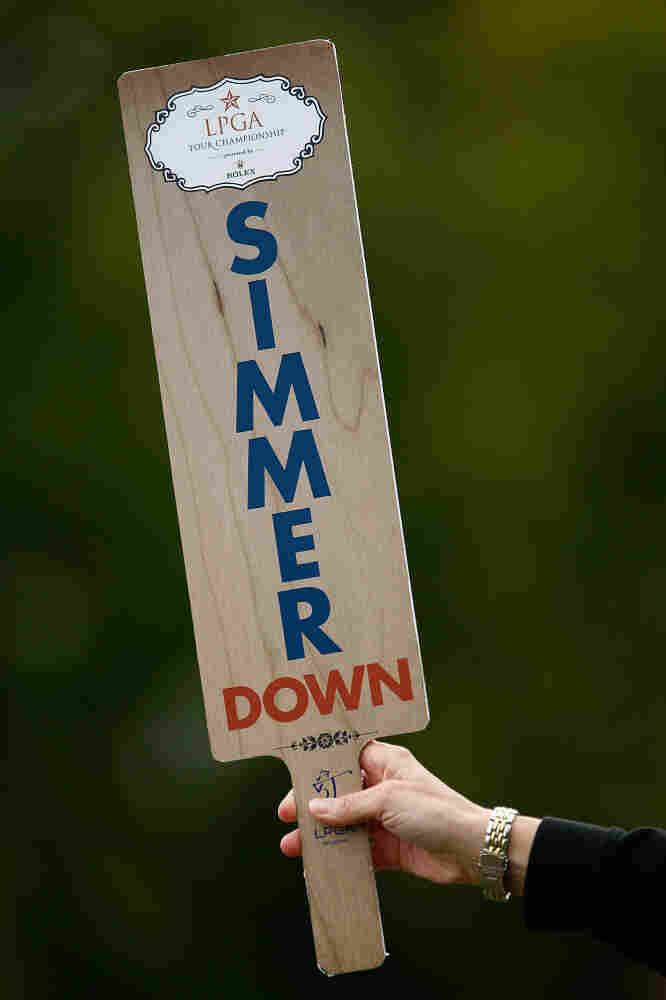 Rep. Shelley Moore Capito says that her father once resorted to using a "quiet" paddle, like this one seen at a Texas golf tournament, to calm things down during her family's Thanksgiving dinner. Scott Halleran/Getty Images hide caption

Asked how to deal with a situation like Halloren's, Capito says, "Sometimes I wonder, when the boyfriend or the fiance actually challenges the patriarch or the matriarch of the family, if they're really interested in the person they're dating."

Other than restraint, Capito recommends using any distraction at hand to change the subject — it may be the perfect time to bring in dessert, she says, or to announce that someone should take the family dog out for a walk.

The key is to break up the dispute, she says. And Capito cites some family experience with the matter — in particular, she recalls one of her uncles, who had a habit of dominating conversations at Thanksgiving.

"One year, my dad pulls out from under the table one of those wooden sticks that you get at a golf tournament," Capito says. "And it says, 'Quiet Please.' So, maybe that's what Dawn needs at her family table."

Another advice-seeker, Seth Merritt, a college senior in Springfield, Mo., says he had some issues with his uncles at a Thanksgiving meal after the last presidential election:

"My uncles and I started to argue about politics. And they referred to Barack Obama and started alluding to his race in the most negative way as possible, and saying that his race had a lot to do with what he was doing wrong, and how the economy was going.

"So I tried to argue the point that, you know, I don't think that his race has anything to do with it, and they were saying that it did.

"They brought up that they work really hard, and they said that any time they try to get anything in life, people of ethnic backgrounds that are different than their own come in and take that from them."

Asked what she would do in that type of situation, Capito says, "Well, I think that's difficult, because it's obviously some deep-seated feelings on the part of his relatives. Sounds like they have some racist tendencies. And I'm not sure that's rational. I think that's tough to change, as much as you want to," she says. "In that case ... you're better off just to have somebody come in and start a new topic. I mean, politics is dangerous, but when you get into the field that he was in, I think it can really result in some really hurt feelings. And I think that's the last thing anybody wants from a family gathering."

But the clash also raises a question: How far should someone be allowed to go before they're challenged on an issue?

"I think that's admirable that they didn't just let them get away with it. I wouldn't go with that strategy," Capito says. "I think education, obviously, is part of the answer. ... That's a difficult one. I'm glad that doesn't happen at my table."

And finally, there's the story from Mary Sincell, of Oakland, Md., who recalls an argument from 1970. That was the era of the Vietnam War draft, when she was just 7 years old. Sincell's two brothers were already in college. She recalls:

"They both had really shaggy beards, and long hair, and were somewhat outspoken about Vietnam, because a lot of their friends were being drafted.

"And I just remember suddenly having this outburst with my uncle, who was a World War II veteran and was very conservative, and a lot of shouting. And that was just electrifying.

"And later, I asked my mom what had happened, and she said, 'Well your uncle Bob just doesn't like your brothers' long hair.'

"I was born in 1953," Capito says. "So what the caller is talking about could have happened in my own house, with my dad being a World War II veteran, and my brother being in college in the late '60s, early '70s, along with my sister and I."

But Capito's parents also had a secret weapon: the children's table. And she sat at it for years, she says — even as an adult, along with her husband.

"I think there is a way for you to model good behavior, but sometimes you just can't avoid it. People are passionate about the way they feel," she says, "and it's probably good for children to see that you're not just talking about the latest movie star that's getting divorced, or maybe the latest football game — that you're really talking about issues of the day that are extremely important. And use it as a current-events lesson — as long as it doesn't get out of control."

When Capito and her family gather for Thanksgiving, the table features a mix of Republicans and Democrats.

"West Virginia is a very Democratic state," she says.

But she says the emphasis is on catching up with one another, not on talking politics.

Still, when asked who among her family would likely be the one to make a joke about Congress having a dismal approval rating, Capito says, "I'll probably make that one myself."

"That's one thing that gets lost in a lot of these arguments. At some point, you have to have a sense of humor," she says. "I think that's always a useful human element to throw in there, when things start to fall apart."