Accessibility links
Former Cricket Star Finds Fans In Pakistani Politics Imran Khan, who led Pakistan to its only World Cup Championship in 1992, aspires to be the country's prime minister. He's been in politics for years with limited success, but is now drawing big crowds. 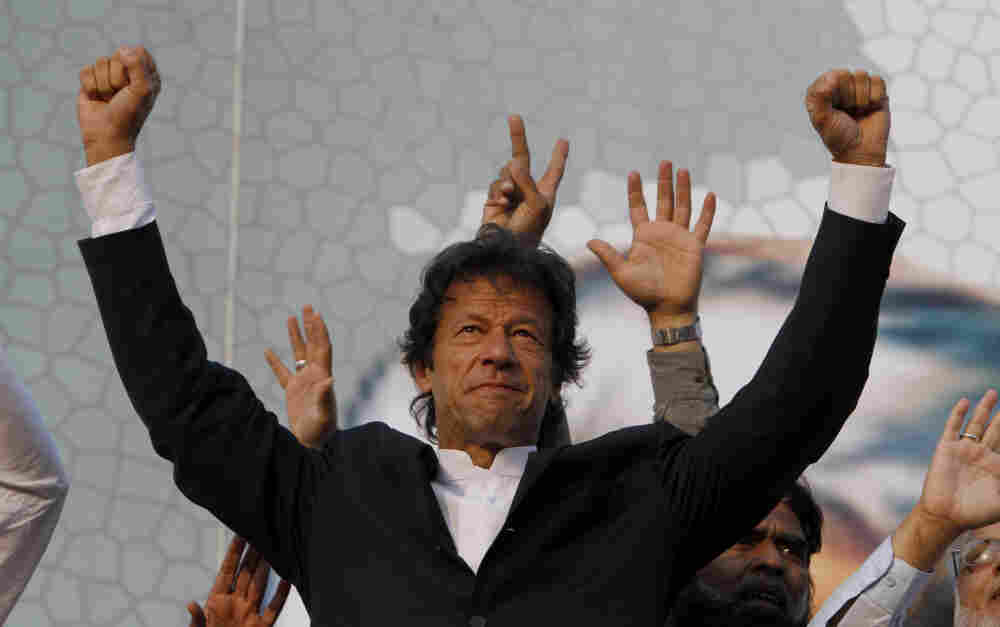 Former cricket star Imran Khan waves to supporters during a rally in Lahore, Pakistan, last month. Khan, who is campaigning to be prime minister, attracted a crowd of some 100,000 at the rally. K.M. Chaudary/AP hide caption 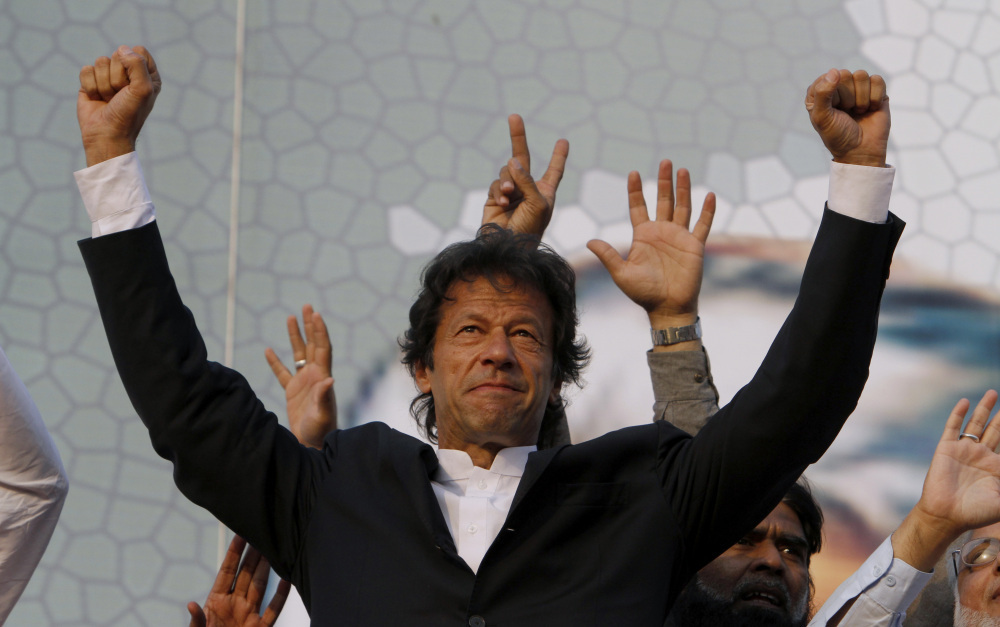 Former cricket star Imran Khan waves to supporters during a rally in Lahore, Pakistan, last month. Khan, who is campaigning to be prime minister, attracted a crowd of some 100,000 at the rally.

After 15 years on the fringes of Pakistani national politics, Imran Khan is at the epicenter.

Khan is outpacing rivals in the size and enthusiasm of his rallies and a survey conducted by Gallup Pakistan says he's the only politician in the country who's actually gaining ground. Khan told a crowd of more than 100,000 in Lahore last month that they have triggered a political tsunami.

"And anyone who dares to stand in its way will be drowned," he thunders, making an oblique reference to President Asif Ali Zardari and his chief rival, opposition leader Nawaz Sharif. Sharif is a former prime minister, but his party drew only a fraction of the support that Khan amassed in the rallies held in Lahore just a day apart.

Khan denounces politicians who don't declare their financial assets and inveighs against tax evaders whom he says cost the country billions in lost revenue. Khan is merciless with Pakistan's entire political class, bludgeoning it with the issue of corruption.

Khan says that the CIA drone missile attacks against militants in Pakistan's tribal areas are actually helping the extremists attract recruits. In an interview at his hilltop home in Islamabad, jammed with the cars of politicians beating a path to his door, Khan is asked whether the United States has the right to defend itself against militants who are attacking NATO troops from Pakistani soil.

"This is not self-defense, this is actually creating more enemies," Khan says. "It is bound to cause collateral damage. It causes massive hatred against the U.S. Hatred is what leads to more and more people joining the militants. So it's completely counterproductive. If the U.S. really wanted to protect itself, this is not the way to do it."

Khan says the way the U.S. can protect itself is to back a credible leadership in Pakistan, which is not perceived to be what he calls a "stooge."

"I repeat the word," Khan says. "The moment you are a stooge, you lose this ability, you lose the credibility to actually mobilize your people to isolate the terrorists."

Khan who was educated in England is culturally at home in the West. He insists that he is not anti-American. He says, if elected, "we will be your friends but not your slaves."

A Proponent Of Change 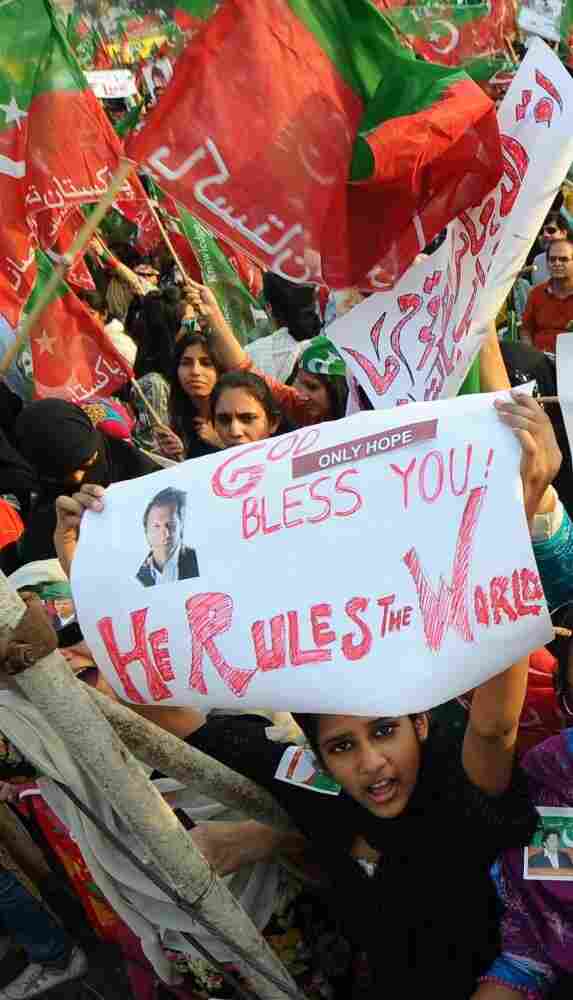 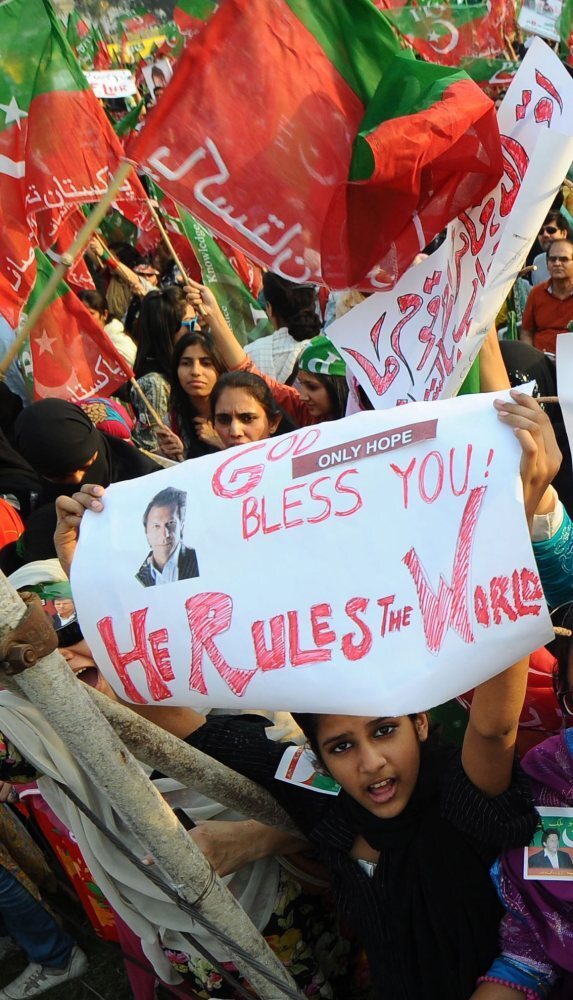 Khan projects himself as an agent of change. But some observers fear he may be campaigning with the covert blessing and support of the biggest establishment group there is: Pakistan's intelligence service, the ISI. Critics suspect the ISI was quietly promoting Khan ahead of the October rally that is being called a game changer for his campaign. Khan calls the claim of ISI involvement nonsense.

"You saw passion," Khan says. "Even if ISI wants to help you, it cannot inject passion in the people. How do you inject passion? For five hours people waving flags, undying, I mean, Pakistan has changed."

Mushahid Hussain Syed, a veteran politician and friend of Khan's, suspects the military and intelligence have a soft spot for the 58-year-old ex-cricket captain who still bears the physique of a world-class athlete.

"They like him," Syed says. "When he comes on the television screen, he looks good, speaks for Pakistan and makes the right noises, the right messages for Pakistan. So maybe there is compatibility and a comfort level."

The old political guard is anything but comfortable with Khan's potential to upset the status quo.

Critics say some of Khan's political statements sound more like wispy idealism than cold-eyed realism, such as his call for negotiations with Pakistan's militants to avert a further slide into extremism. Some observers including columnist Cyril Almeida say this approach suggests a dangerous naivete.

"[It] is completely out of chime with reality," Almeida says. "In the tribal areas, we've tried a number of peace deals and all that the peace deals resulted in was that the militants got the space and time to expand their control and dig in."

But Syed says Khan has inspired a public primed to throw out the old and grasp the new.

"His message has resonated with a large chunk of Pakistanis who are tired of politics as usual," Syed says. "In that way I find Imran very refreshing. It's a plus for Pakistan. It shows that our society, our younger crowd — there's a lot of vigor in them and they have faith in the future of Pakistan."