Accessibility links
Egypt Military Rulers Reject Calls To Step Down Officials say the first round of parliamentary elections will start on time next week despite serious unrest. 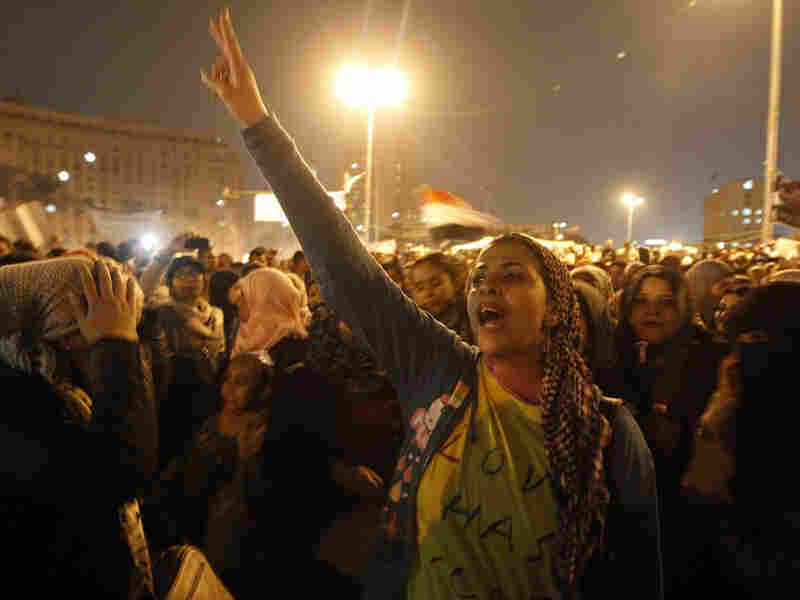 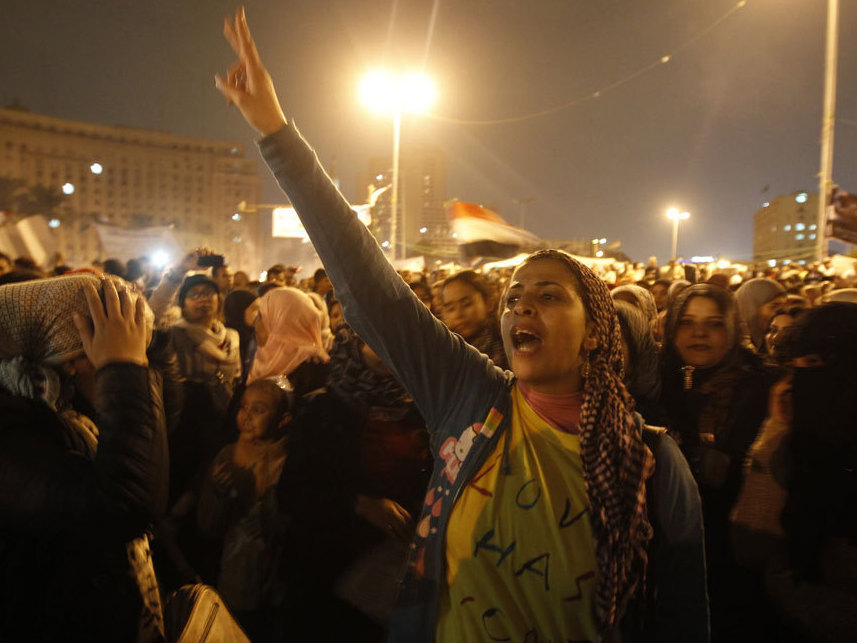 Egyptian women join a mass protest in Cairo's Tahrir square on Thursday, as members of Egypt's ruling military council rejected calls to step down immediately, saying it would amount to a "betrayal."

Egypt's military rulers rejected protester demands for them to step down immediately and said Thursday they would start the first round of parliamentary elections on time next week, despite serious unrest in Cairo and other cities.

The ruling military council insisted it is not the same as the old regime it replaced, but the generals appear to be on much the same path that doomed Hosni Mubarak nine months ago, responding to the current crisis by delivering speeches seen as arrogant, mixing concessions with threats and using brutal force.

So far it's working no better than it did under the former leader.

Protesters in Cairo's Tahrir Square, seething over the military's perceived failings over the past nine months, say they will not leave the iconic plaza until the generals step down in favor of a civilian presidential council, a show of resolve similar to that which forced Mubarak to give up power in February after nearly three decades.

"What we want to hear is when they are leaving," said Tahrir protester Khaled Mahmoud on hearing of an apology offered by the military for the deaths of nearly 40 protesters since Saturday. "The ouster of the marshal is only a matter of time," he added, referring to Field Marshal Hussein Tantawi, who was Mubarak's defense minister for 20 years before he succeeded him in February.

"There will be no postponement in the election," said Maj. Gen. Mamdouh Shaheen, one of two members of the ruling military council who spoke at a televised news conference on Thursday. "The election will be held on time with all of its three stages on schedule."

The two generals said the throngs in Tahrir do not represent the whole of Egypt and warned of chaos if the council was to immediately step down, language similar to Mubarak's scare-mongering while trying to cling to power in the face of the 18-day uprising against his rule.

The two generals, Shaheen and Maj. Gen. Mukhtar el-Malla, also said that parliamentary elections would start on time Monday and that a new prime minister to replace Essam Sharaf would be picked before the vote.

News reports that were not yet officially confirmed said Kamal el-Ganzouri, who served as prime minister under Mubarak in the 1990s, has been approached by the military as a possible candidate for prime minister. State television showed footage of el-Ganzouri meeting with Tantawi. If confirmed, el-Ganzouri would replace Essam Sharaf, whose government resigned this week.

Tahrir Square, meanwhile, was quieter Thursday after five days of intense clashes. Police and protesters agreed to a truce negotiated by Muslim clerics at the scene. At the same time, soldiers built barricades from metal bars and barbed wire to separate the protesters and the police on streets-turned-battlefields leading from Tahrir to the nearby Interior Ministry.

Protesters formed a series of human chains on the those streets to prevent anyone from violating the truce or approaching flashpoint areas close to the police lines. The truce came into force around 6 a.m. and was holding by nightfall.

The two generals from the ruling council who spoke attempted a revision of recent history to fend off calls for the military to step down.

They said their legitimate claim to power came when troops were warmly welcomed by Egyptians at the time they took over the streets from the discredited police early in the anti-Mubarak uprising. The legitimacy of their rule was reinforced by the overwhelming endorsement Egyptians gave to constitutional amendments they proposed and put to a referendum in March, they said.

"Consequently, it will be a betrayal of the people's trust if the military council was to relinquish power now," Shaheen said. "History will not kindly remember that."

El-Mallah, addressing the same news conference, said the military respected the views of the Tahrir protesters, but they did not represent the whole of Egypt.

"We will not relinquish power because a slogan-chanting crowd said so. ... Being in power is not a blessing. It is a curse. It's a very heavy responsibility."

Activists blame the military council for the country's persistently tenuous security and its growing economic woes, along with a host of other failings.

They say the council has been secretive, issuing cryptic decrees, cracking down on critics and seeking to discredit groups behind the anti-Mubarak uprising and turn the public against them. It has put at least 12,000 civilians on trial before military tribunals and is accused of torturing detainees.

The military's standing as the nation's most upright institution was dealt a heavy blow by clashes during a Coptic Christian protest on Oct. 9 in which 27 people died, most of them Christians. Video showed soldiers running down demonstrators with armored vehicles. The military tried to deny its troops opened fire or intentionally ran over protesters, blaming the violence on Christians and "hidden hands."

A coalition of more than 20 youth groups and political parties, responding to the comments made by Shaheen and el-Mallah, accused the military of spreading "misinformation" and pledged to continue their sit-in until it transfers power to a "national salvation" government to oversee elections for a new parliament and president.

"We are determined to protect our (January) revolution," they said in a statement that also disputed the assertion by the two generals that the March referendum gave legitimacy to the military's rule.

The military has been Egypt's most powerful institution since army officers seized power in a 1952 coup that toppled the monarchy. All four presidents since then hailed from military background. Taking the reins from Mubarak on Feb. 11 gave the military the opportunity to directly rule Egypt for the first time since the early 1950s, something that critics often cite to explain their political inexperience.

With Mubarak under arrest and being tried on crimes punishable by death, Tantawi and his generals would be loath to step down under pressure and leave themselves vulnerable to legal proceedings by the next administration.

Additionally, stepping down would inflict lasting damage to the military's standing, although that has already been hurt by the scathing criticism and ridicule they already have endured on the streets and in the independent press.

Perhaps as a precaution against such a prospect, the generals have been trying to win immunity for the armed forces against civilian oversight and to enshrine a role for themselves in the next constitution as guardians of the nation. The bid was seen as one of the final straws that sent people out onto the streets again, convinced the military was trying to grab and cling to power.

The military has countered the criticism with implicit threats, frequently using the patriotism card and insisting that they have no wish to stay in power beyond the election of a new president before the end of June 2012.

"O glorious people of Egypt, our only loyalty in the armed forces is to you and the soil of Egypt," Tantawi told the nation this week in a televised address.

"Criticism directed at the Supreme Council of the Armed Forces (the formal name of the military's ruling council) aims at weakening our will and mandate and seeks to undermine the great trust between the people and their armed forces," said Tantawi, whose address bore a striking resemblance to speeches given by Mubarak during the January-February uprising.

The two generals also praised the police for what they said was their restraint and said they have every right to defend themselves, but acknowledged they made mistakes while handling the protesters. They said nothing about witness reports that members of he military police also battled protesters alongside the hated police in the latest clashes.

They appeared to try to drive a wedge between the protesters, addressing those camping out in Tahrir square as "honorable" while criticizing others who battled the police for five days on nearby side streets.

The military, said the two generals, would return to their barracks if only Egyptians voted in favor of that move in a referendum or when an elected civilian administration was in place. The idea of holding a referendum on the military immediately stepping down was first floated by Tantawi on Tuesday.

The military's defiance in the face of popular opposition to its rule comes as more and more protesters in Cairo and elsewhere in Egypt blame the army and the much hated police equally for the death of nearly 40 protesters since the clashes broke out on Saturday. At least 2,000 others have been wounded. The military is also accused of remaining loyal to Mubarak, having put him under arrest and on trial only when large protests pressured them to do so.

"The army is now operating like the police, a tool of suppression," said protester Mayada Khalaf. "With all these lies from the army, it is like they are sticking their tongues out at us."