Accessibility links
With The Flick Of A Switch, It's Crystal Clear To Hear For people with hearing loss, trying to hear in noisy places like airports and theaters, can be tough. But advocates are spreading word of not-so-new technology that allows sound from loudspeakers to be transmitted directly to hearing aids, cutting through the background noise. 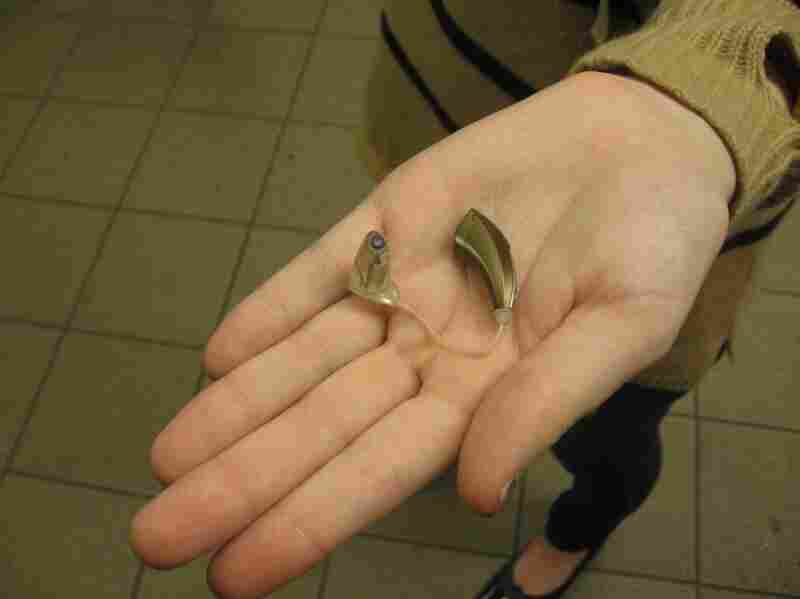 Arielle Schacter, 17, holds her hearing aid in a New York subway station. Hearing loop technology funnels a transit worker's voice into her ear, blocking out the subway noise behind her. Ashley Milne-Tyte for NPR hide caption 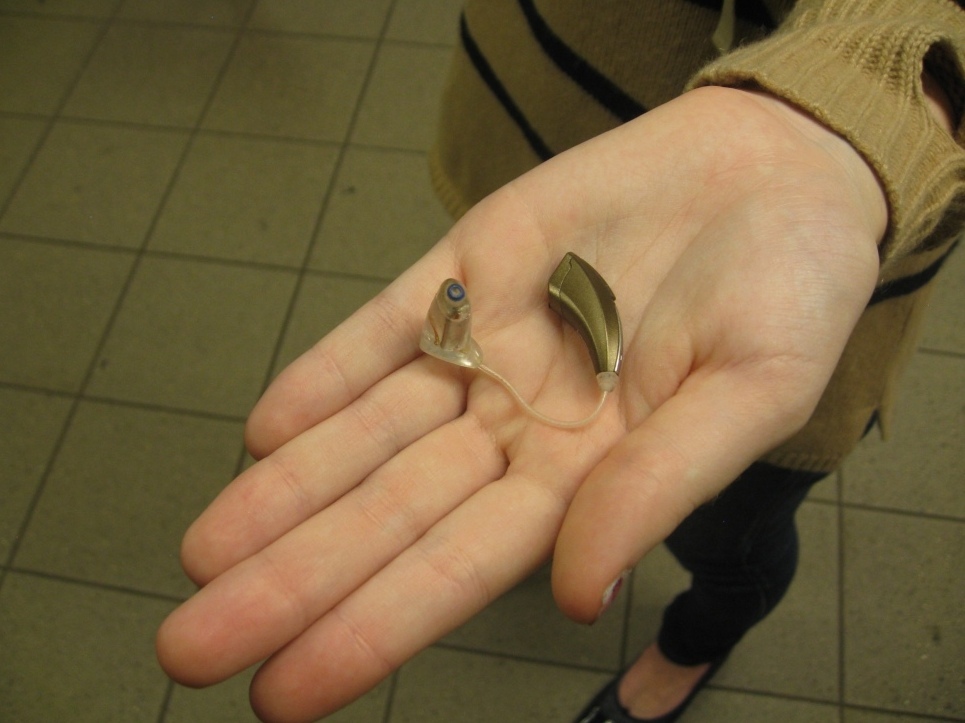 Arielle Schacter, 17, holds her hearing aid in a New York subway station. Hearing loop technology funnels a transit worker's voice into her ear, blocking out the subway noise behind her.

For the more than 10 percent of Americans who have some form of hearing loss, mass transit can be frustrating, especially on a busy travel weekend like this one. Even if you wear a hearing aid, trying to hear in places like airports, theaters and places of worship can be tough.

But a group of advocates is changing that by putting a not-so-new technology called telecoils to work. The coils are small wires hidden inside a majority of hearing aids that, when activated, amplify sound emitting from magnetic sources, like loudspeakers.

Psychology professor David Myers is a proponent of telecoils and the hearing loop infrastructure that supports them. He discovered the technology when he went on vacation to Scotland. He was thrilled to visit the 800-year-old Iona Abbey, but when the service began, he was lost.

"As the sound reverberated around those ancient stone walls, it was indecipherable by the time it got to my ears," Myers says.

Then his wife noticed a hearing assistance sign on the wall with a 'T' on it, which stood for telecoil. Since Myers was wearing hearing aids that contained the tiny, inexpensive part, he pressed a button on each hearing aid to activate the feature.

Suddenly crystal clear sound was coming from the center of my head as if the person were three feet in front of my face.

"And what happened was just amazing," he says. "Suddenly, crystal clear sound was coming from the center of my head as if the person were three feet in front of my face."

The abbey had installed a wire called a hearing loop or induction loop, which transmits sound via a magnetic signal to the telecoil in a hearing aid or cochlear implant. Once switched on, that telecoil acts as a personal wireless loudspeaker for the listener. Sixty-nine percent of new hearing aid models contain telecoils.

A hearing assistance sign with a 'T' lets people know they can activate their telecoil, or t-coil.   hide caption

A hearing assistance sign with a 'T' lets people know they can activate their telecoil, or t-coil.

To a regular hearing aid wearer, a church service can sound muddled because the voice of a speaker at the front reverberates and melds with ambient noise around the room. But listening to the same service with the assistance of a telecoil makes the speaker's voice immediately intelligible without the background noise.

Hearing loops are common in public spaces and at ticket windows in Britain and Scandinavia. Since he got back from Scotland, Myers has been on a mission to bring them to the United States. His part of Michigan now has hundreds of them, from senior centers to the Grand Rapids airport.

But hearing assistance systems in this country more commonly use infrared or FM signals to transmit sound. The problem with that technology, Myers says, is it requires people with hearing loss to "get up, locate, check out, wear and return special equipment."

The equipment may be either a headset or a neck loop, and many people with imperfect hearing are reluctant to go through the trouble or call attention to themselves. Janice Schacter runs an advocacy group in New York City called the Hearing Access Program.

"People with hearing loss actually want dignity," she says. "They don't want a big neon sign saying, 'I have a hearing loss.' "

This video shows the difference between what an ordinary hearing aid picks up in a church, and what an activated telecoil sounds like. A hearing loop installed around the perimeter of the church transmits only magnetic signals and not reverberating sounds.

Schacter's daughter Arielle, 17, has severe hearing loss. Family outings could be a trial.

"We would go to a Broadway show, and she couldn't hear the sound," Schacter says. "Sometimes the sound director would think the music was loud enough and they therefore didn't need to mic the music into the headset; sometimes the headsets were broken."

Schacter's organization has helped get hearing loops installed at New York venues like the Natural History Museum, an Apple store and most of the information booths in the notoriously noisy subway system.

Arielle Schacter says the hearing loop in the booth at a station funnels the transit worker's voice right into her ear and blocks out the subway noise behind her.

Without it, she says, "I would have a much more difficult time, I would rely less on hearing and more on lip reading and doing that. And ... that's not perfect."

Her mother is continuing her push to loop New York City and other places. Janice Schacter says as baby boomers age, they'll want as hassle-free a way to hear as possible.

Helping Those With Hearing Loss Get In The Loop July 2, 2010