Accessibility links
Jay-Z 'Decoded:' The Fresh Air Interview Jay-Z is one of the most successful hip-hop artists of all time. On Fresh Air, he discusses growing up in Brooklyn surrounded by drugs and violence, and the stories behind many of his famous songs. 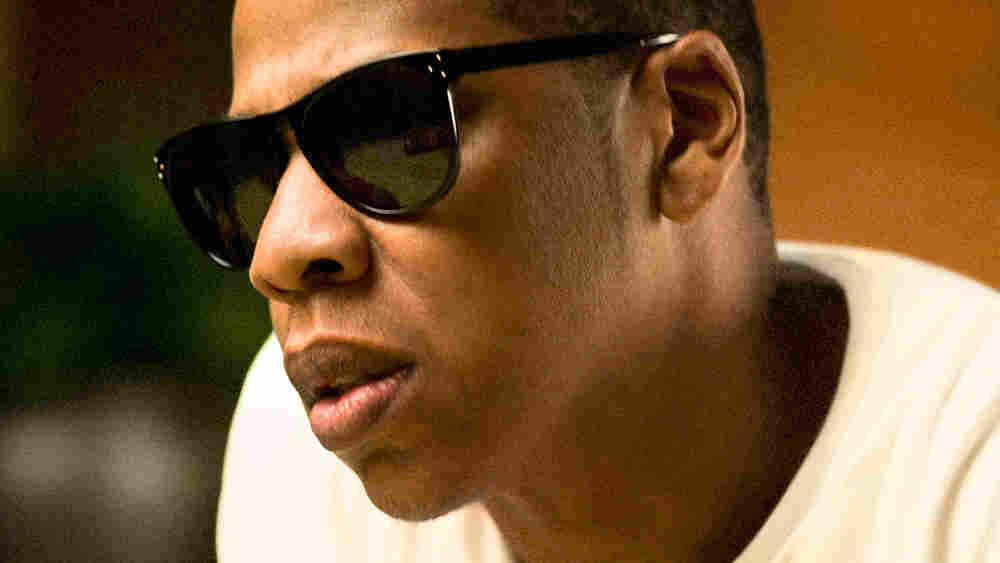 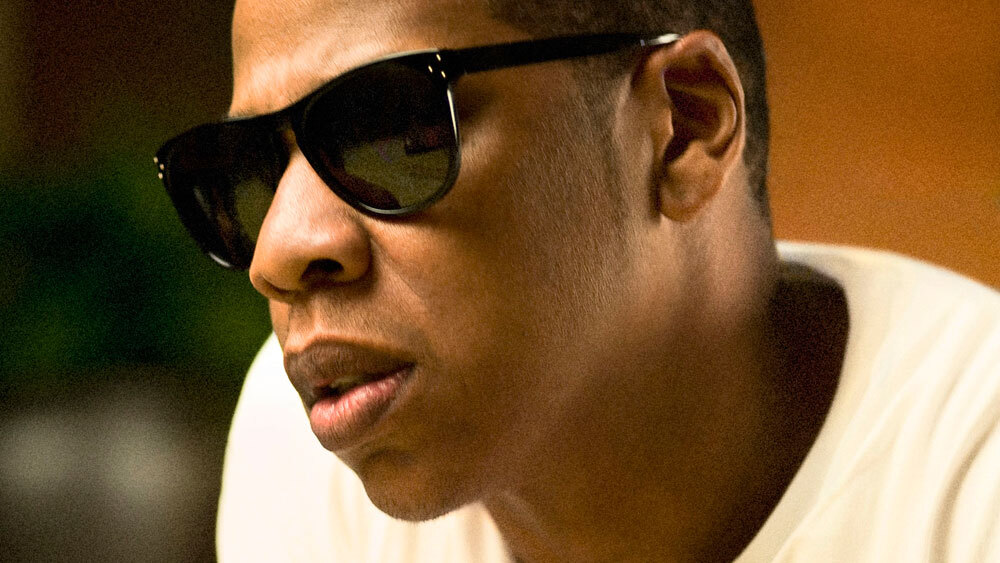 This interview was originally broadcast on November 16, 2010. Decoded is now available in paperback.

Long before he sold 50 million records worldwide — and before he appeared alongside Warren Buffett on the cover of Fortune magazine, accumulated 10 Grammy Awards and became the CEO of his own record label — Jay-Z was living with his mom in the Marcy Houses housing project in Bedford-Stuyvesant, Brooklyn, just trying to survive day by day. 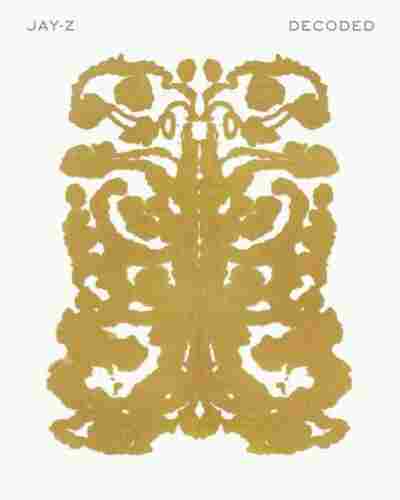 "It was a very intense and stressful situation," he tells Fresh Air's Terry Gross. "There was playing in the Johnny-pump (an opened fire hydrant) and the ice-cream man coming around and all of these games that we'd play, and suddenly it would turn just violent and there would be shootings at 12 in the afternoon on any given day. It was a weird mix of emotions. One day, your best friend could be killed. The day before, you could be celebrating him getting a brand-new bike."

Now 40, Jay-Z hasn't forgotten his past — or the lyrics he's written over the years about his childhood in the projects. In his new book Decoded, he unpacks the detailed riffs and lyrics that make up 36 of his songs — while examining both his own life and the growth of hip-hop over the last two decades.

He also talks candidly, both in the book and on Fresh Air, about the period in his life when he was a teenager selling crack cocaine on the streets.

At the time he was selling, Jay-Z was also coming up with rhymes. He normally wrote down his material in a green notebook he carried around with him — but he never took the notebook with him on the streets, he says.

"I would run into the corner store, the bodega, and just grab a paper bag or buy juice — anything just to get a paper bag," he says. "And I'd write the words on the paper bag and stuff these ideas in my pocket until I got back. Then I would transfer them into the notebook. As I got further and further away from home and my notebook, I had to memorize these rhymes — longer and longer and longer. ... By the time I got to record my first album, I was 26, I didn't need pen or paper — my memory had been trained just to listen to a song, think of the words, and lay them to tape."

'Jay-Z Talks About Mortality On The Streets'

Since his first album, he says, he's never written down any of his lyrics.

"I've lost plenty of material," he says. "It's not the best way. I wouldn't advise it to anyone. I've lost a couple albums' worth of great material. ... Think about when you can't remember a word and it drives you crazy. So imagine forgetting an entire rhyme. 'What's that? I said I was the greatest something?' "

One of the songs Jay-Z writes about extensively in the book is "Hard Knock Life (Ghetto Anthem)," a single from his third album Vol. 2 ... Hard Knock Life. It samples music from the musical Annie, which Jay-Z says he watched repeatedly as a child.

"When the TV version [of Annie] came on, I was drawn to it," he says. "It was the struggle of this poor kid in this environment and how her life changed. ... It immediately resonated."

Twenty years later, Jay-Z was on a Puff Daddy tour in the late '90s, when he heard a DJ play an instrumental version of "It's the Hard Knock Life" from Annie.

"It immediately brought me back to my childhood and that feeling," he says. "I knew right then and there that I had to make that record, and people would relate to the struggle and the aspiration in it, as well."

To get the rights for "Hard Knock Life," Jay-Z says he "exaggerated a touch" in his letter to the original songwriters, Charles Strouse and Martin Charnin. He told them how much Annie meant to him growing up, because he won an essay contest as a child and got to see the musical on Broadway, cementing his love for the show. But, he says with a laugh, that actually never happened.

"I wrote a letter about how much Annie meant to me growing up and how I went to a Broadway play — which was an exaggeration," he says. "I saw it on TV. It was a bad lie ... for a good reason."

Jay-Z has sold more than 50 million albums worldwide. He is the former CEO of Def Jam Recordings and the founder of Roc Nation. He was ranked the 5th top male solo artist of the 2000s by Billboard magazine. He has also received a great deal of recognition from the American Music Awards, the BET Awards, and the MTV Video Music Awards.

On Sampling The Jackson Five's 'I Want You Back' In "IZZO"

"I grew up in Marcy Projects in Brooklyn, and my mom and pop had an extensive record collection, so Michael Jackson and Stevie Wonder and all of those sounds and souls of Motown filled the house," he says. "So I was very familiar with the song when Kanye [West] brought me the sample. It had been used in hip-hop previously, but it was just such an interesting and fresh take on it that I was immediately drawn to it."

On How Crack Changed The Marcy Projects In The Mid-'80s

"They have a saying, 'It takes a village to raise a child.' It changed the authority figure. Crack cocaine was done so openly, and the people who were addicted to it, the fiends, had very little self-respect. It was so highly addictive that they didn't care how they obtained it and they carried that out in front of children, who were dealing at the time. So the relationship of that respect, 'I have to respect my elders' ... that dynamic shifted and it broke forever. It just changed everything from that point on.

"I was very aware of the dangers involved because there were people dying [and] there were people going to jail and it wasn't a one-off. It wasn't an occurrence where everyone was shocked. It wouldn't be a shock like, 'How could that happen in this neighborhood?' It was really a weekly or monthly occurrence."

On Danger Mouse's Grey Album, Which Samples Both Jay-Z And The Beatles Without Copyright Permission

"I think it was a really strong album. I champion any form of creativity. And that was a genius idea to do, and it sparked so many others like it. It's really good. ... I was honored someone took the time to mash those records up with Beatles records. I was honored to be on quote-unquote the same song with The Beatles."

On The Song 'December 4th'

One of the songs Jay-Z writes about extensively in the book is "December 4th" from The Black Album; the song is heavily autobiographical and features riffs by Jay-Z's own mother, Gloria Carter.

"I tricked her [into appearing on that]," he says. "I told her to meet me down at the studio and we were going to go to lunch. She came down to the studio, and I just brought the track up and I said, 'I just want you to talk on it.' Because I knew if I told her [she was going to be on the song], she'd get really nervous. [She said], 'What do you want me to say?' And the rest is history."

On Crotch-Grabbing In Rap Music

"In hip-hop, the music leads first. So usually, you have a hit record and then [the record executives] throw this person on stage who has never been on stage before. So they don't have any experience on how to perform in front of people, hold the mic — all these different things you need to know as a performer. So you get up there, you feel naked. So when you feel naked, what's the first thing you do? You cover yourself. So that bravado is an act of, 'I am so nervous right now. I am scared to death. I'm going to act so tough that I am going to hide it, and I have to grab my crotch.' That's just what happens."

"A lot of these albums are made when artists are young, 17 or 18 years old, so they've never had any real relationships. And if you come from the neighborhoods we're in, we have low esteem ourselves. And the women, well, the girls — they have low self-esteem as well. These are all dysfunctional relationships at a young age. The poet is pretty much [giving] his take on his dealings with girls at that time. He's not in a stable relationship; he's on the road. He's seeing girls who like him because he makes music. They spend one night together; he gets a phone number. He leaves for the next town and does the same thing over again."

"That was the writer in me being provocative, because that's what rap music should be at times. That was really directed to all of the people who hear buzz words in rap music — they hear 'bitch' or 'ho' or something and immediately dismiss everything else that takes place. And everything has to be put in context. And when you put it in context, you realize that I wasn't calling any female, besides a female dog, a 'bitch' on this song."