Accessibility links
From South Africa, Lessons In 'Soft Vengeance' South African Constitutional Court Justice Albie Sachs discusses how a once-divided nation can abandon the impulse to avenge past wrongs and, instead, come together to build a new democracy. One of the framers of the country's constitution, Sachs also mulls over just what it means to determine the "intent" of a nation's founding fathers. 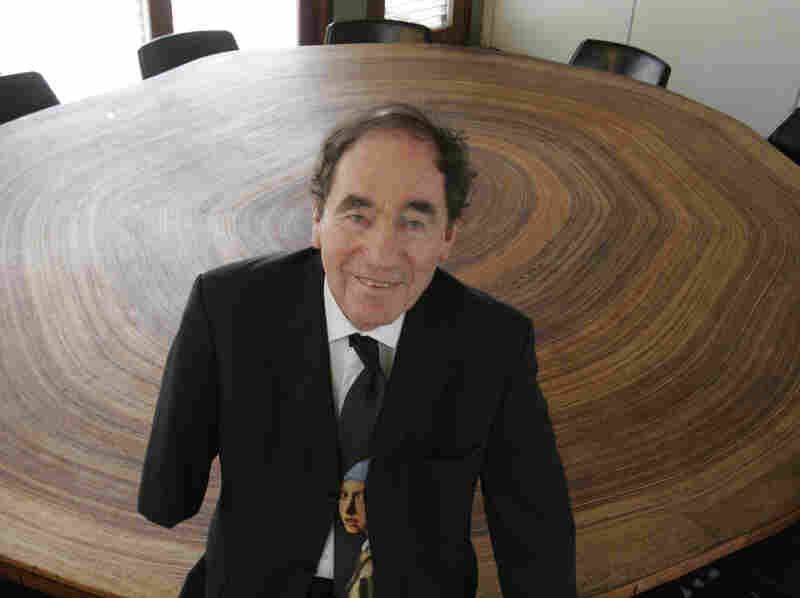 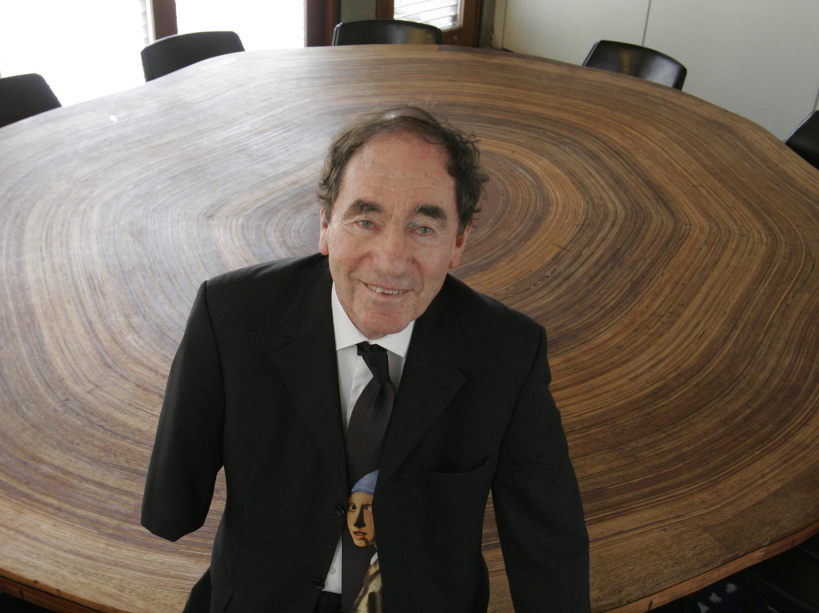 South African Constitutional Court Judge Albie Sachs, seen here in Johannesburg in 2009, resisted the impulse to take revenge on the bomber who cost him his right arm.

Sometimes in the life of a reporter, you meet a person so extraordinary, so interesting, that you want to share that experience with others. Such is the case with Albie Sachs, whom I met while on vacation in South Africa.

Sachs has led a remarkable life, moving from freedom fighter to founding father.

Once imprisoned, tortured and exiled, he later helped write the South African Constitution and was appointed by Nelson Mandela to serve on the nation's Constitutional Court, analogous to our Supreme Court. In his spare time, he has authored 10 books, including his latest, The Strange Alchemy of Life and Law.

But I am getting ahead myself. Let's start at the beginning.

Albie Sachs is white and Jewish, the son of trade union activists. He first became involved in the anti-apartheid movement more than 60 years ago when he was a 17-year-old college student. He graduated with a law degree and went on to represent many of the African National Congress activists who were imprisoned, tortured and even sentenced to death for their political activities.

Eventually, the authorities came for him too. In 1963, he was arrested without charge and put in solitary confinement for six months. Three years later he was arrested again, interrogated and tortured. This time when he was released, he fled the country and spent the next 24 years in exile, much of it in Mozambique, where he taught law at the university and worked with leaders of the African National Congress to bring down the white South African government.

'We Will Avenge You'

No anti-apartheid activist was safe in those days, even outside South Africa. Many were targets for assassination by the South African security forces. And in 1988, in Mozambique, a bomb placed in Sachs' car exploded, nearly killing him. Doctors managed to save his life, but his right arm was gone, and he was blinded in one eye. Later, he was transported to England.

Hard vengeance leaves you still at the level of the people who did these awful things. Soft vengeance is the triumph of your life, of your ideals, of your goals.

"When I was lying in the London hospital, arm blown off, recovering the sight of my one good eye," he recalls, "I received a note from a friend of mine saying, 'We will avenge you,' and I felt very uncomfortable with that. We're going to cut off the arms of the people who did this? Are we going to blind them in one eye? What sort of a country is that? Is that what we're fighting for?"

What Sachs wanted instead, even for the men who had bombed his car, was what he calls "soft vengeance."

"Hard vengeance leaves you still at the level of the people who did these awful things," he explains. "Soft vengeance is the triumph of your life, of your ideals, of your goals."

Two years after the bombing, the South African government caved to international pressure, released Nelson Mandela after 27 years of imprisonment, recognized the ANC and other opposition groups, and began the process of negotiating a democratic transition to majority rule in an overwhelmingly nonwhite country. After 24 years in exile, Sachs returned home and was appointed to the committee charged with drafting a new constitution for a new nonracial state.

So, since he was one of the founding fathers, as it were, one of the framers of his country's constitution, I asked him about a question that has roiled the legal waters in the United States: What does he think of the notion of original intent as a way of figuring out what the constitution means?

He demurred as it applies to the United States, but when it comes to South Africa, Sachs says that even though he was what he calls "one of the original intenders," discerning intent is next to impossible.

He describes the complicated, but typical, process of drafting, where "we would come up with a draft, and it would be commented on by others and go through different committees, and then it would be put in context and it would have neighboring clauses." In such a multifaceted process, he maintains, "It wasn't as though there was a meaning that we attributed to it and intended to be there for all time."

Indeed, Sachs says that when he goes over the reams of old drafting documents these days, he is often surprised.

"Oh gosh, is this what we had in mind? I didn't remember we crossed out certain words. In fact, as interesting as what appears in the final version would be what was dropped along the way. And there's usually very little record of that."

Even the word "intent," he contends, is not clear. "What were you willing to concede from people on your side? From the other side, who saw the words differently?" And when there is disagreement, he observes, eventually, "a certain moment comes when you say, 'Enough, we've got to get on with the constitution.' "

There were, of course, some things that Sachs insisted on, among them a guarantee of no detention without trial. "It wasn't enough to simply guarantee the right to be brought before court within 48 hours," he says.

Instead, "we had to put in expressly, no detention without trial, because that was the weapon that was used" by the apartheid government "to detain thousands and thousands of us. It completely subverted the whole of criminal procedure. It made, in effect, the security police the arbiters of who were guilty, who were not."

At every stage, says Sachs, the transition to a nonracial democracy was difficult. Even at the new Constitutional Court, where the new justices had to decide whether an accused offender should be prosecuted under the old apartheid-era law that existed at the time of the crime, or under the new law.

"I remember the head of our court going around the table, and he asked one judge, 'What do you think?' " The judge replied that under the transition provisions of the constitution, "the literal meaning is quite clear. It's unfortunate, but it's just temporary."

The other justices seemed to agree. Until it came time for Sachs to speak. "No," he blurted out, but by his own account, he choked on his words, unable to articulate a reason. "I just knew something was wrong," he recalls.

"This constitution was a new dawn. It was a total rupture with the old order, and the idea that the old way of doing things, the racist, authoritarian way, could seep into the future, even for a minute, to my mind just seemed to violate the whole meaning of the constitutional moment." Sachs' dilemma was quickly solved when the other justices spent more time discussing the issue, and after much mulling, the Sachs view prevailed by a 7-to-4 vote.

A new and fair system of justice is one thing. But a visitor to South Africa can't help but wonder about a more visceral justice, and why it is that after so many decades of brutal oppression, the nonwhite majority did not, in fact, take vengeance on the white oppressors.

Sachs' answer to that question is complicated. It combines the Gandhi tradition of nonviolence, which started when Gandhi lived in South Africa, with the British tradition of judicial fairness, and the decades-long struggle by Nelson Mandela, Oliver Tambo and other leaders whose aim was a nonracial society.

"We want to prove to our fellow South Africans, we want to prove to the world, that black and white can live together. This was like a vision, an aspiration," Sachs says. He describes "a kind of ache to get beyond divisions."

And at rock bottom, there was the realization that neither whites nor nonwhites could survive alone. "We actually needed each other," he observes.

Whites had capital and skills that would help the new South Africa grow and prosper. And nonwhites, who were then about 90 percent of the population, needed that capital and needed to learn those skills to build a new nonracial system of education, housing and health care that would deliver to them the very things they had been deprived of.

So could people who suffered during the apartheid era really just forgive and forget?

In that vein, Sachs recalls his meeting with one of the men who planted the bomb in his car. His name was Henri, an officer of the security forces, who came to see Justice Sachs in his court chambers, to seek forgiveness.

The two men talked for a long time, until Sachs finally ended the meeting with these words: "Normally when I say goodbye to somebody, I shake their hand. I can't shake your hand. Go to the Truth Commission, tell them what you know, and who knows, maybe one day we'll meet [again]."

After that, Sachs forgot about the man who tried to kill him. But many months later, when the justice was at a large, raucous party, he heard a voice saying, "Albie." Looking around, he heard "Albie" again. "And by god," Sachs recalls, "It's Henri."

The two men found a quiet corner, and Henri told him that he had in fact gone to the Truth and Reconciliation Commission and told them everything he knew.

"And I said, 'Henri, I've only got your face to tell me what you're saying is the truth,' and I put out my left hand and shook his hand," Sachs recalls. "He went away absolutely elated, and I almost fainted. It was a real shock to me. But I heard afterwards that he had been dancing around and suddenly left the party and went home and cried for two weeks. And that moved me. I'm not Henri's friend. I don't want to go to a movie with him, but we are starting to live in the same country, and to me, that's more meaningful than if he'd been sent to jail."

It is, in Albie Sachs' view, soft vengeance.