Accessibility links
New Catholic Mass Already Causing A Stir This weekend, Catholics may experience a surprise when they attend Mass. The words and music are different, thanks to the first major change of the English-language Mass in 40 years. Supporters say the new prayers are more elegant; critics say they're clumsy and are a triumph of conservatives. 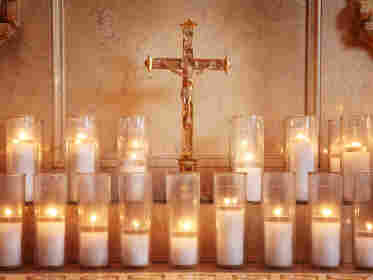 This weekend, the words and music of the English-language Mass will be different. iStockphoto.com hide caption

This weekend, Catholics may experience a little surprise when they attend Mass. The words and music are different, thanks to the first major change of the English-language Mass in more than 40 years.

For many practicing Catholics, this will be a major adjustment.

So on a recent Sunday, the Rev. Chester Snyder of St. Joseph's church in Mechanicsburg, Pa., did a trial run through the new liturgy with his parishioners.

"Let's practice it. The Lord be with you," he said. And — eyes fixed on laminated cheat sheets — the several hundred faithful responded, "And with your spirit."

"You're pretty good at this," the priest observed.

As of Nov. 26, the liturgy has a new vocabulary — not an overhaul but enough to trip people up, especially those who have the old one memorized.

Snyder was shocked at the changes at first. But then he considered what the Mass celebrates: the sacrifice of Jesus on the cross.

"And that's not everyday stuff," he says. "That's profound, it's mystery, it's beyond our comprehension. So when we enter into the realm of mystery, we try to have a language that is a little different from what we use in the marketplace, or the football stadium, or even in our everyday conversation."

That is precisely what the Vatican is trying to achieve. When the Latin Mass was translated into English some 40 years ago, it was a bit of a rush job. Everyone knew it would be revised. The new translation is closer to the Latin, both in words and in sentence structure.

St. Joseph's, like many other parishes, has offered adult education classes to explain the changes and delve into the theology of the Mass. Some churchgoers were skeptical, even annoyed, at the changes.

"Of course change is always going to be a little rough, especially with a group this large," says Karen Messinger, who attended one of the classes. "But I figure if there are no changes, we'd still have a Mass in Latin, so we have to have some changes."

Janet Beveridge adds that this is nothing compared with the shift from Latin to English. "It's good because it makes you be on your feet and pay attention to what you're doing and not take it for granted," she says. "And I never want to take my faith for granted."

We're dealing with a power play on the part of certain people in Rome who wanted to make changes in order, I think, to bring under greater control people in the English speaking world.

But Monica Malpezzi thinks the new language is stilted and confusing and will only create a barrier between people and God. "If we have to scramble for understanding in what our prayer life is, I think that will make it harder for us to feel that God is right there with us."

Malpezzi echoes the sentiment of many priests across the country. They say if the people's new prayers are awkward, the priests' prayers are sometimes unintelligible. Bishop Donald Trautman, former chairman of the bishops' committee for the liturgy, says the priests now have to recite some sentences that are 90 words long. He also dislikes the formal tone. For example, in one funeral Mass, the priest implores God to give the departed "kind admittance to Your kingdom."

Trautman says sometimes the new translation is not faithful to the Bible. For example, it has Jesus, a poor carpenter, sipping from a precious chalice during the Last Supper.

"Any Greek dictionary will tell you, it's a drinking cup," Trautman says, "It's a vessel. It's not a chalice."

Trautman says even Indiana Jones got that one right; the rugged archeologist selected a rough cup as the Holy Grail.

But Trautman's concerns also go beyond vocabulary to theology. He cites where the new translation says Jesus died "for you and for many." 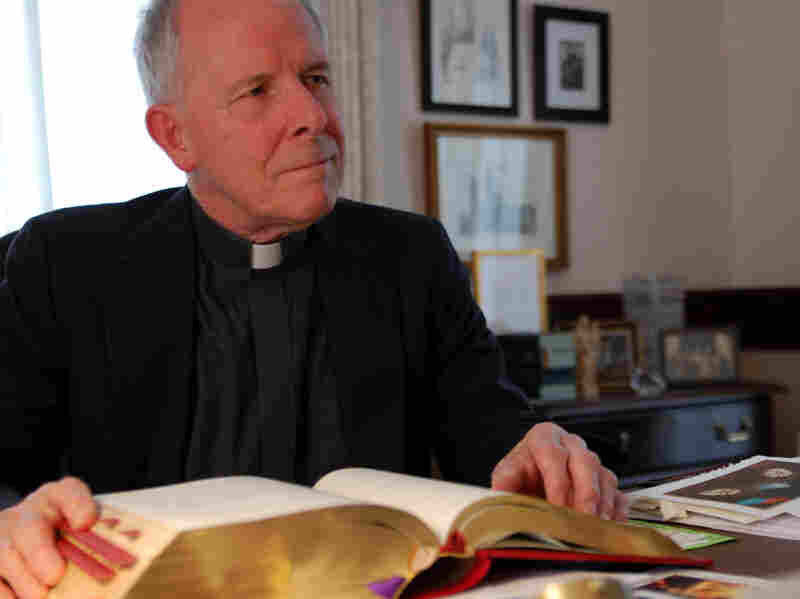 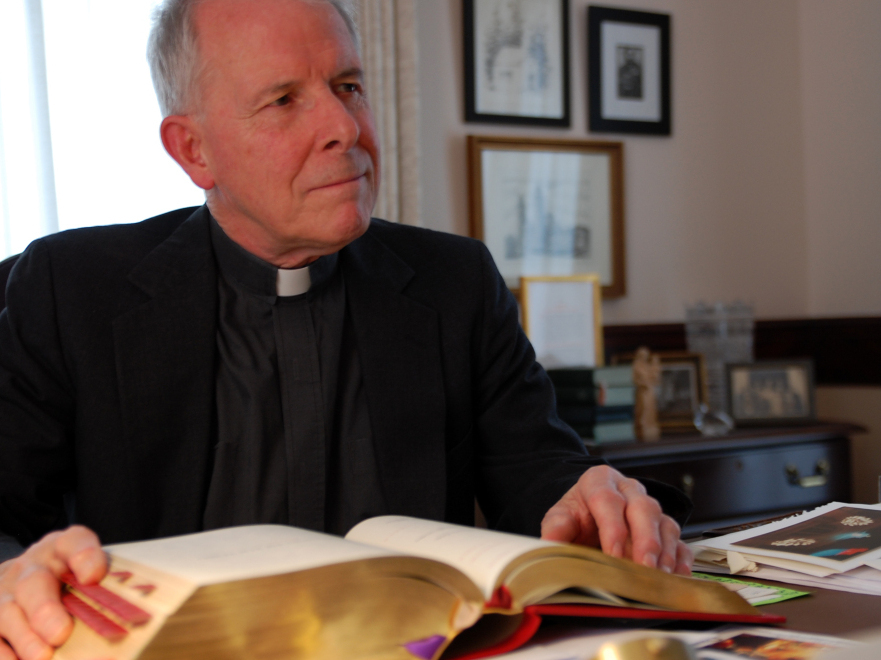 The Rev. Michael Ryan, the pastor of St. James Cathedral in Seattle, has reservations about the newly revamped English-language Catholic Mass.

The Rev. Michael Ryan, the pastor of St. James Cathedral in Seattle, has similar reservations. "It seems that the Latin is more important than the theology; that's a pity," Ryan says.

"We're dealing with a power play on the part of certain people in Rome who wanted to make changes in order, I think, to bring under greater control people in the English-speaking world."

Jeffrey Tucker, a musical director in Auburn, Ala., and managing editor of the magazine Sacred Music, thinks the changes are for the better.

"There's a kind of paranoia about all of this," Tucker says. " 'Oh, look! We don't want to go back to pre-Vatican II days with nuns that hit us with rulers and priests [who] are fussing at us for our sins all the time or whatever.' All we're really saying here is that we want church to feel and sound like church."

Tucker says the new words and music are an overdue adjustment from a liturgy that is too "chatty."

Monsignor Rick Hilgartner, who is overseeing the change in liturgy for the U.S. Conference of Catholic Bishops, agrees. And he asks: Just how accessible does the liturgy have to be? "People might say, 'Well, what about children?' So do we then say that the whole liturgy has to be at a third-grade reading level? How long would that sustain adults in the faith?"

Hilgartner says the new words simply reflect the maturing of the American faith, and he asks people to be patient.

All we're really saying here is that we want church to feel and sound like church.

"I would hope people wouldn't Monday morning quarterback this on Nov. 28," he says. "We all need to give each other some time to learn our parts so that we cannot just be focused on words, but ultimately get to a point that the words start to speak to our hearts."

No doubt, the regulars at parishes across the country are already committing the new words, music and rhythms to heart. But this weekend may be disorienting for the millions of Catholics who reserve their worship for the holiday season — which begins, yes, this weekend.