Accessibility links
Crackdowns On Immigration Create A Backlash In Arizona, the architect of a controversial immigration law has been voted out of office. In Alabama, the nation's strictest immigration law has ignited a withering backlash expected to force major changes. "We overreached," admits one Republican supporter of the law.

Have The Crackdowns On Immigration Gone Too Far?

Have The Crackdowns On Immigration Gone Too Far? 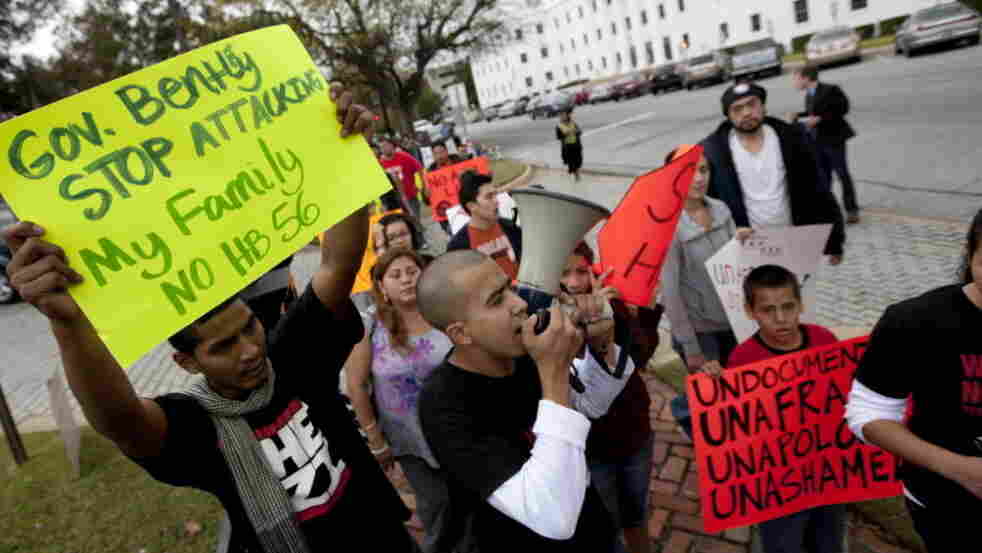 Protesters march outside the Alabama Capitol during a demonstration against the state's immigration law in Montgomery, Ala., on Nov. 15. Dave Martin/AP hide caption 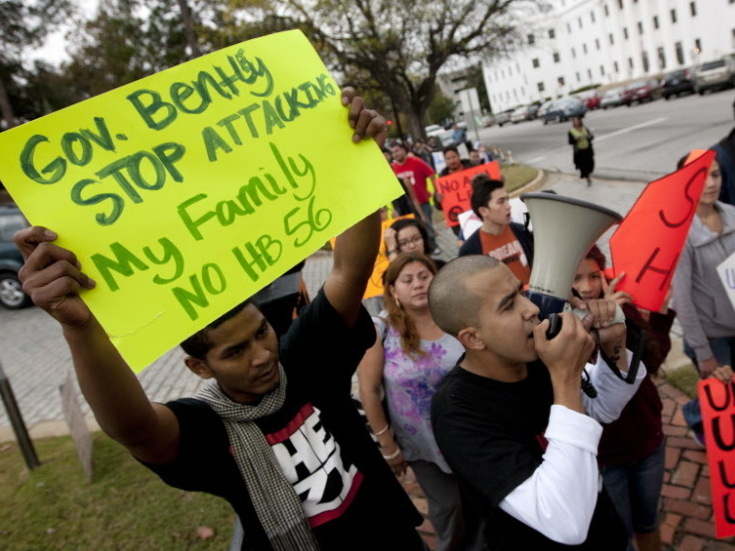 Protesters march outside the Alabama Capitol during a demonstration against the state's immigration law in Montgomery, Ala., on Nov. 15.

The architect of Arizona's controversial immigration law has been voted out of office. That law and similar statutes are undergoing difficult court challenges. And the strictest law, in Alabama, has ignited a withering backlash expected to force major changes.

Have the crackdowns on illegal immigration finally gone too far?

"If you asked me this question about a year ago, I would tell you we were on the cusp of seeing more anti-immigration legislation," says immigration analyst Muzaffar Chishti of the Migration Policy Institute. "Now, what's happening is very interesting. I think there is evidence of overreach and some sobering reassessments of 'Is this the right thing to do?' "

The latest cautionary tale comes from Alabama, home of the nation's toughest immigration enforcement law. State lawmakers insist they were right to pass the law, but have decided to amend it in response to severe criticism and confusion among residents and business owners. The lawmakers say they want to change regulations that have produced consequences well beyond the intent of deterring illegal immigrants.

An example of the law's unintended results played out recently in Tuscaloosa, Ala., with the arrest of a Mercedes-Benz executive for driving a rental car without proper ID. The man, who is from Germany and produced only a German ID, was visiting the Mercedes manufacturing plant in the state.

Under previous state law, he would only have been ticketed. But Alabama's new immigration law requires everyone to carry a valid identification card, or risk being jailed. The law also directs police to question the immigration status of individuals suspected of being in the country illegally.

A broader concern is language in the law requiring proof of legal status for "any transaction between a person and the state or a political subdivision of the state." Critics say the provision is vaguely written and exposes individuals and businesses alike to criminal charges for a range of activities, from the issuing of government-issued licenses to flu shots.

Most of us realize we made some mistakes in this bill. We overreached, and we want to see if we can clear up some unintended consequences.

Businesses and ministers in particular object to another provision that makes it a felony for those who aid an illegal immigrant, even unknowingly.

"Most of us realize we made some mistakes in this bill. We overreached, and we want to see if we can clear up some unintended consequences," says Alabama state Sen. Gerald Dial, a Republican who voted for the law and is one of the lawmakers crafting potential amendments.

Bob Dane, a spokesman for the Federation for American Immigration Reform, which supports stricter immigration measures, says such laws remain necessary because of President Obama's refusal to properly enforce existing federal laws. He also says local governments across the country are choking on an estimated $113 billion a year in costs for educating, incarcerating and caring for illegal immigrants.

"The politicians who are putting these laws into effect are serving their public," Dane says. "What choice do you have as a mayor, as a governor, as a state lawmaker when you are running out of money and your resources are finite? Who are we going to serve first? Don't legal residents have the first priority?"

Dial says Alabama lawmakers won't weaken their law. Yet he himself has proposed eliminating one of the key features that makes it the strictest in the nation: a requirement that public school officials collect the immigration status of pupils.

"I think the pendulum is swinging back to the middle because national public opinion is changing, especially because of the impact on schoolchildren. They are innocent, and they put a public face on this," says Victoria DeFrancesco Soto, a visiting scholar at University of Texas, Austin. "It's a similar effect to when the nation started seeing children attacked by dogs during the civil rights movement."

For now, the schools provision of Alabama's law has been halted by a federal judge. The Justice Department has filed legal challenges against the laws passed in Alabama, Arizona, Georgia, South Carolina and other states, arguing that enforcement of immigration policy belongs exclusively to the federal government.

Given the ongoing failure of Congress to pass immigration reform, many advocates on both sides believe the issue will be resolved by the Supreme Court. The Arizona law lost a key battle in April when a three-judge panel of the 9th Circuit U.S. Court of Appeals upheld a federal judge's ruling that halted the enforcement of key provisions in the law, including a requirement that police question the immigration status of individuals suspected of being in the country illegally.

Arizona Gov. Jan Brewer, who has vowed to appeal the ruling, wants the Supreme Court to take up the case. The Justice Department earlier this month filed a brief with the high court asking the justices to stay out of it and let the rulings of the lower courts stand.

Another outcome that turned some against these laws is the economic impact on states where Hispanics are departing to avoid the new regulations. In Alabama, where agricultural companies depend heavily on immigrant workers, the state's economy would shrink by $40 million if 10,000 illegal immigrants left the workforce, according to the Center for American Progress, a progressive think tank that advocates for immigration reform that includes a path to legal status.

On Monday, 11 Democratic members of Congress appeared in Birmingham to call for the repeal of the state's law. They led hundreds of protesters in a rally that cast the issue as a fight for civil rights. The demonstration was held at Birmingham's historic 16th Street Baptist Church, where four African-American girls were killed in a 1963 bombing — a seminal moment in the battle over integration.

"We don't come here to be critical of the legislators of Alabama who are trying to find a solution [to illegal immigration] ... but [their law is] the wrong way to go about it," Rep. Charles A. Gonzalez, a Texas Democrat who is chairman of the Hispanic Congressional Caucus, told reporters in Birmingham. Gonzalez called the law "ill-conceived" and an "injustice" and called on Republican members in Congress to join Democrats in passing immigration reform.

Backlash At The Ballot Box

Chishti and others cite another sign that the anti-illegal immigration push has lost momentum: the status of an effort to repeal automatic citizenship for the U.S.-born children of illegal immigrants.

In January, Republican state lawmakers from Arizona, Pennsylvania, Georgia, Oklahoma and South Carolina unveiled model bills that would grant states the authority to bestow citizenship based on their own criteria. The legislation is aimed at provoking lawsuits from civil rights and other groups in order to push the matter to the Supreme Court, which would be asked to rule on the guarantee of birthright citizenship in the 14th Amendment.

But no such bill was introduced in state legislatures this year, Chishti says, because lawmakers were cowed by the enormous criticism for a birthright citizenship bill proposed in Arizona by state Sen. Russell Pearce.

The backlash worsened the controversy surrounding Pearce, a Republican, who had become a nationally divisive figure for authoring Arizona's immigration law. Earlier this month, he lost in a recall election driven partly by immigrant advocates.