Accessibility links
Even Lawmakers Ask: Does Anyone Like Congress? Last month, for the first time ever, a CBS-New York Times poll showed Congress' approval rating had plunged to a single digit — 9 percent. And following this week's failure by the supercommittee to agree on a deficit reduction plan, many lawmakers fear that number can only get worse. 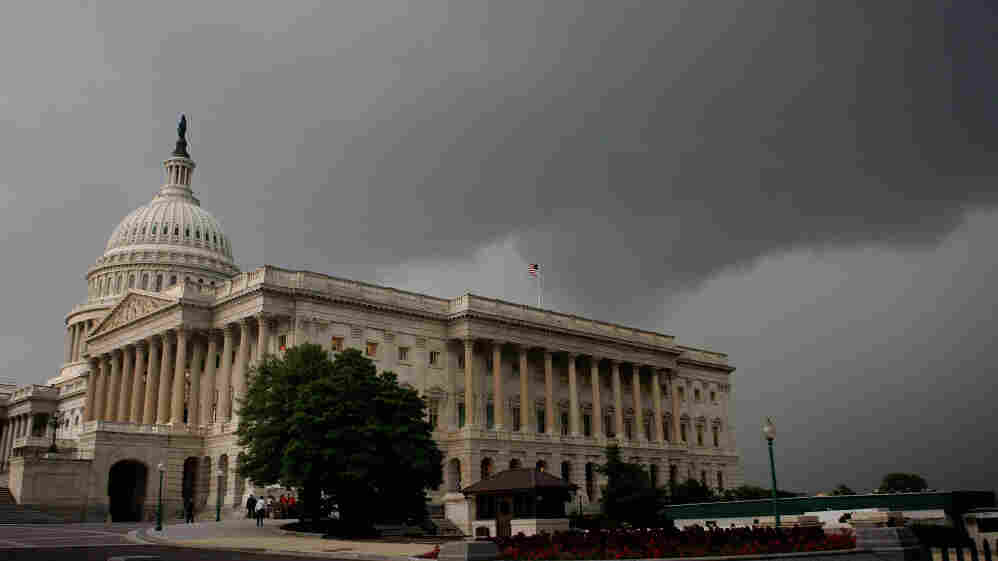 A dark cloud passes over the U.S. Capitol in Washington, D.C. Many lawmakers fear that Congress' already low approval rating will sink even further after the failure of the supercommittee. Mark Wilson/Getty Images hide caption

It's long been the case that only a minority of Americans approves of the job Congress is doing. But last month things hit a new low: For the first time ever, a CBS News-New York Times poll showed Congress' approval rating had plunged to a single digit — 9 percent.

And following this week's failure by the congressional supercommittee to agree on a deficit reduction plan, many lawmakers fear that number can only get worse.

One evening a couple of weeks ago, Colorado Democrat Michael Bennet rose to speak in a nearly empty Senate chamber. Clearly exasperated, he warned his absent colleagues that their 9 percent approval rating was fast approaching the margin of error for 0 percent approval.

A Decade Of Dropping Approval

The number of people who say they approve of the job Congress is doing reached a new low last month. Here, a look at Congress' approval rating in October for the last 10 years from the New York Times-CBS News poll.

"More people support the United States becoming communist — I don't, for the record — at 11 percent, than approve of the job that we're doing," Bennet said. "I guess we can take some comfort that Fidel Castro is at 5 percent."

'What Is The Problem?'

The ranks of Congress haters would seem to be growing. But how do lawmakers themselves explain the low esteem they're held in?

As Sen. John Kerry, D-Mass., put it: "It's not enough for people to say Washington is broken. It just is not enough."

Just minutes after the bipartisan supercommittee that Kerry sat on admitted failing to reach an agreement, he told reporters the question that had to be asked was: "What is the problem?"

"And I will say to you after these three months [when the supercommittee was in existence] that it is clear to me that the problem is a huge ideological divide in our nation," he said.

That's Michigan Rep. Candice Miller's take on the problem as well. Before heading home for the Thanksgiving break, the fifth-term Republican noted that voters did elect a divided government last year.

"We're approaching this, both sides, as though this is an ideological battle to be won, rather than a practical problem to be solved," he says.

Sen. Michael Bennet, D-Colo., recently warned his colleagues from the Senate floor that their approval rating is fast approaching the margin of error for 0 percent approval.

Maine Rep. Chellie Pingree, a Democrat who has been in Congress nearly three years, says she's frustrated with many of her colleagues.

"I'm kind of embarrassed for us," she says. "I mean, I feel like as a member of Congress, I do the right thing, and I'm on the side of right, but the fact is, if the entire institution can't act and can't move forward and can't find a way to work with the president in such tough economic times, we deserve the blame heaped back on us."

'It's Worse Than It Looks'

Historically, Congress has resolved its differences and gotten things done through compromise. But Rep. Jack Kingston, R-Ga., says compromise is not what everyone wants.

"Every time I'm in the streets of my district, one person will grab me and say, 'Don't you think it's about time you compromised?' The next person will say, 'I'm sick and tired of your compromising. What's wrong with you? Can't you stand on principle?'" Kingston says.

And that is what makes it so hard for Republican lawmakers like Kingston simply to split the difference, says Norm Ornstein, a congressional scholar at the American Enterprise Institute, a right-leaning Washington think tank. Ornstein has been watching Congress and writing about it for decades. He says not even members from solidly GOP districts can feel safe these days making deals.

"For Republicans in Congress right now, in the House especially, what they're looking at is primaries ahead," Ornstein says. "And we know a number of these Tea Party freshmen are much more worried about a challenge from the right in a primary — somebody saying he's 'gone Washington' because he's voted for something — than they are about what happens after that in the fall."

Ornstein says he's not surprised Congress has just gotten its lowest approval rating ever. His last book about that institution, published five years ago, was titled, The Broken Branch. The working title for his next book on the same subject is, It's Even Worse Than It Looks.