Accessibility links
Bachmann's 'Conviction' To Fixing Government After a meteoric rise, GOP presidential candidate Michele Bachmann is now polling in the single digits. But she's still plowing ahead with her campaign, and this week she came out with a memoir. The Minnesota congresswoman talks with co-host Steve Inskeep about Core of Conviction and aiming to win the nomination. 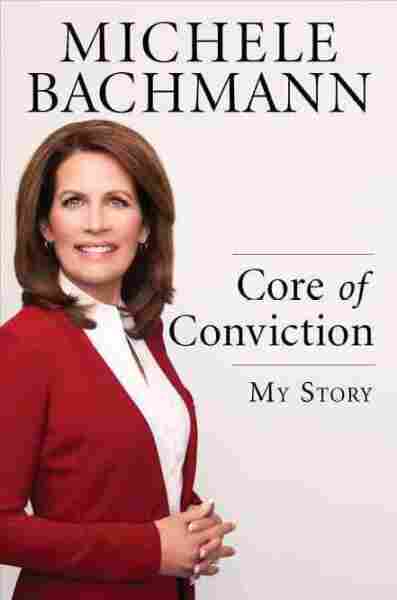 It wasn't long ago that Minnesota Rep. Michele Bachmann's rise to the top of the Republican field of presidential candidates was called "meteoric." In August, she won the Iowa Straw Poll. Now, she's polling in the single digits.

But Bachmann is plowing ahead with her campaign, and this week she came out with a memoir, Core of Conviction. In it, she writes about "our 29 children" — by which she means five biological children and a miscarriage, plus 23 foster kids. She spent much of the 1990s as a stay-at-home mom.

In her career, Bachmann worked as an IRS lawyer, opened a charter school and ran a counseling business with her husband. All these experiences, including her time as a foster parent, involved close relations with the government and — in some cases — receiving government money.

To some, her past might seem a contradiction with her Tea Party rhetoric on the campaign trail, but in an interview with NPR's Steve Inskeep, Bachmann insists she's not anti-government. She says she just thinks government can be run more efficiently.

"It can do more with a lot less money," she tells Inskeep. "There's also things that government does that they have no business doing."

Bachmann says her goal is to make things better and to fix things.

"My core of conviction," she says, "is centered around the animating principles that created America. One of those is that no one owes you a living."

Bachmann's campaign took a hit after she linked the HPV vaccine with mental retardation. In her book, she says it's really important to get your facts right, but acknowledges that she sometimes comes up short.

"I've said things that are inaccurate and I regret that, but the good thing about this process [is that it's] a good training ground to become better, and I'm grateful for that opportunity," she tells Inskeep.

My core of conviction is centered around the animating principles that created America. One of those is that no one owes you a living.

She says she doesn't think she's ever said anything inaccurate during a GOP debate, however, including when she said in Tuesday's national security debate that former House Speaker Newt Gingrich believes 11 million illegal immigrants in the U.S. should be made legal overnight.

Though she's staked out strong positions, Bachmann says that as president she would be able to compromise because she doesn't want gridlock.

Bachmann says if she's the nominee, she won't rest until 13 other like-minded Republican senators are elected so the GOP has a 60-seat filibuster-proof majority to repeal the health care law and to change the tax code.

"I intend to use that office of the presidency to be able to speak directly into the hearts of the American people about why we need to move legislation, because this is a tsunami election in my opinion," she says. "If you look at the polls, the one who really needs to worry is Barack Obama."