Accessibility links
Art Therapy Nonprofit Improvises In New Economy The dismal economy has taken a toll on nonprofits. Donations are down. One nonprofit, Free Arts of Arizona, which uses art as therapy for the children of abused women, has had to make layoffs and budget cuts. 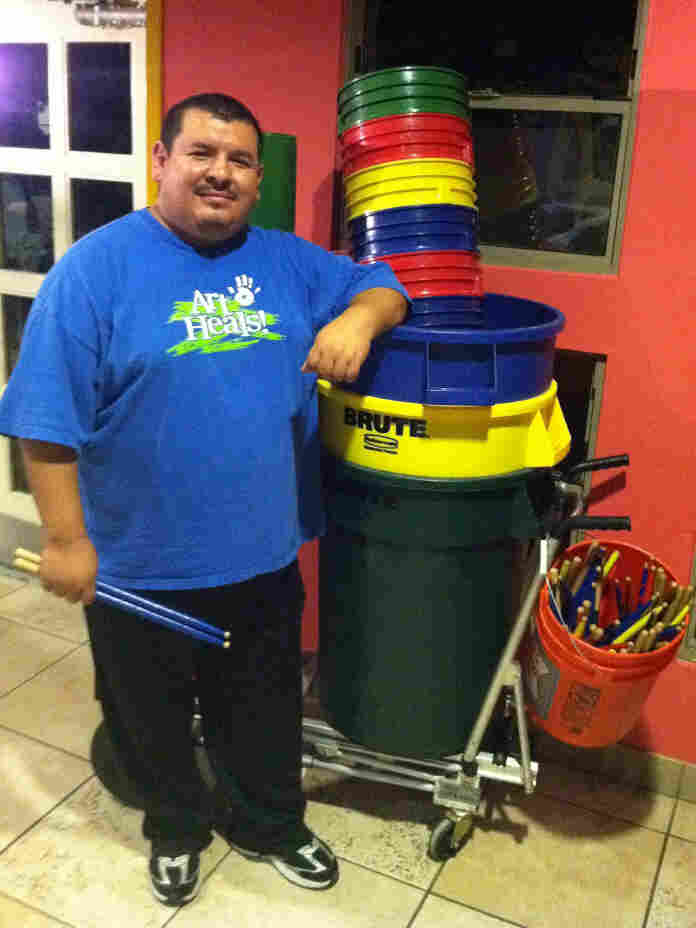 Mario Barela stands next to the supplies he uses for his percussion class. He teaches the fundamentals of drumming to children in a Phoenix domestic violence shelter. Sam Sanders /NPR hide caption 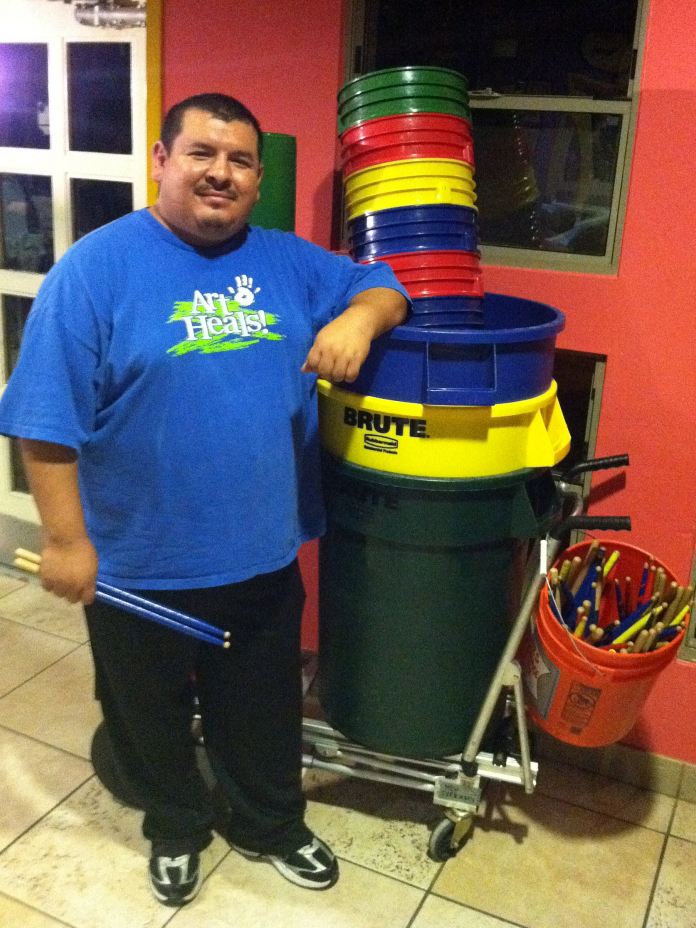 Mario Barela stands next to the supplies he uses for his percussion class. He teaches the fundamentals of drumming to children in a Phoenix domestic violence shelter.

Every Monday, Mario Barela heads to a domestic violence shelter on the west side of Phoenix to teach children of abused women how to drum. Their instruments are old paint buckets. They circle up in the cafeteria of the shelter as Barela leads.

(For the safety of families residing there, NPR can't name or share the location of the unmarked shelter or disclose the names of any of the children there.)

Most of the 20 or so children in the class come from families in distress. One parent, usually their mother, is fleeing an abusive partner. Most of these families are poor. Outside the class, kids who are too young to participate peer through the windows of the small shelter cafeteria. A very pregnant program manager from Free Arts of Arizona sits on the sidelines, tapping her baby bump to the rhythm.

Her name is Jessica Flowers. She says that arts therapy like this can work wonders for abused children. "It's awesome. I think the joy that these kids get to experience in this one hour with Barela is unparalleled by anything else they get to do," Flowers says.

And for children dealing with serious problems in their families, Flowers says banging on paint buckets is one of the better ways to cope. "Kids that have been through trauma so often turn to those negative things like drinking and drugs and self-mutilation," she says. "This is such a great way to be able to get those emotions out in a healthy, positive situation."

But for all the good these classes do, programs like Barela's Buckets of Fun are in danger. Like nonprofits all over America, Free Arts has been in a financial crunch for some time now.

"We have lost half of our government funding," says Barbara Fenster, executive director of Free Arts. "We've lost just about a third of our staff."

Besides layoffs and budget cuts, Fenster says, Free Arts had to stop hiring artists. And now, when businesses want to send volunteers to Free Arts, the nonprofit doesn't just say come on down — it requires a cash donation from those businesses as well.

Maricopa County, Ariz., By The Numbers

But the people who run Free Arts say they aren't giving up. They've matched cuts in staff and funding with increases in volunteers, many of whom are laid off and seeking new ways to fill their time.

As the drum class winds down, none of these issues are on the kids' minds. They just want to know if Barela will be back next week. He says he will. The program isn't just for the kids. It helps him, too.

"Me, myself, I'm a musician, business owner, artist," he says. "They're helping me to express and share my art, and I'm able to get funds through them, which puts food on my table. I appreciate that."

At the end of the class, Barela takes out a big plastic trash can. He's teaching the kids how to improvise. He keeps the beat; they make up their own over his. Free Arts is doing the same, improvising new methods of survival to keep the art it gives alive. For Barela, it's worth it. "Like their slogan says, man, art heals. I believe it."

The first name of Jessica Flowers, the program manager of Free Arts of Arizona, was incorrect in an earlier version of this story.