Accessibility links
'Chicks With Guns': A Picture Of Gun-Toting Women More than 15 million women in the U.S. are gun owners, and 78 of them are in a new photo book. Photographer Lindsay McCrum says guns play a big part in some women's lives, but for very different reasons. 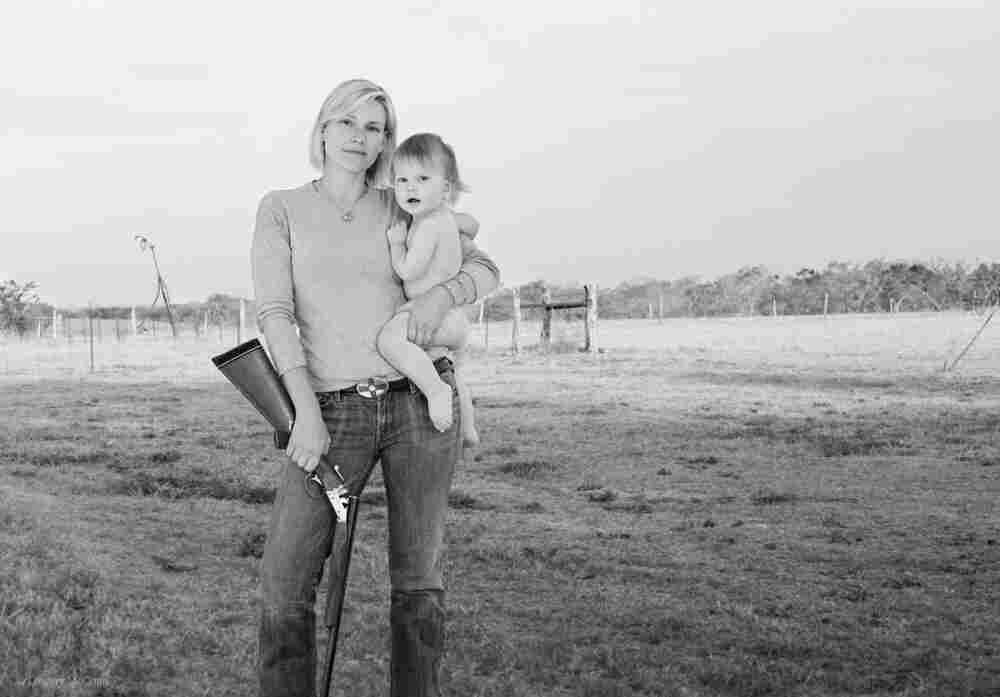 Photographer Lindsay McCrum's new book includes images of women who feel that hunting is a way to bring people and family together. Among those women is Alexandra, who poses for McCrum with her son, Truett, and her Ithaca 20-gauge side-by-side shotgun. Lindsay McCrum/ hide caption 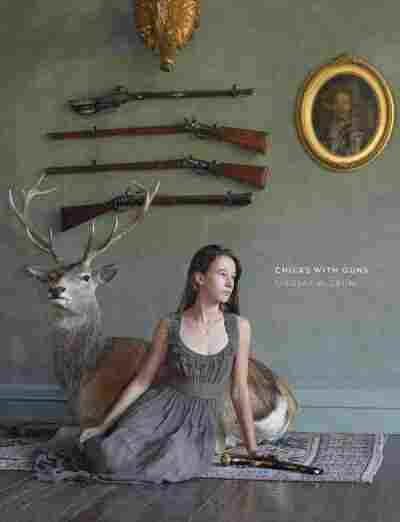 If you turn to page 109 of Lindsay McCrum's photo book, you'll see a photo of a woman wearing jeans and a green baseball cap standing in a grassy field. She's looking straight at the camera, clutching a semi-automatic rifle as if it were a water bottle. Standing between her legs is her son, his blond hair peeking out from behind her thigh as he poses with his toy gun, a miniature of his mother's.

More than 15 million women in the U.S. are gun owners, and 78 of them are in McCrum's new book, Chicks With Guns. McCrum tells Rachel Martin, guest host of weekends on All Things Considered, that the idea came to her while reading an article in The Economist.

"I was really struck by the extraordinary size and scope of the gun business," she says. McCrum began reaching out to women who owed guns across the country and visiting them at their homes to do photo shoots.

Chicks With Guns features women of all ages and backgrounds posing in a variety of settings. On one page, a bride holds a pistol; on another, stuffed animals surround an elderly woman wearing a big grin and holding a revolver.

McCrum's original intent was to include only photographs, but halfway through the project she realized she needed to include more of the story.

"When anyone looks at a portrait, whether it's a painting or a photograph, they project onto that picture," McCrum says. "Now you add a gun into the picture, and a woman, and there's even more projection."

So she added narratives taken from her conversations with the women. "It provided a context, the history and the achievement of these women," she says. 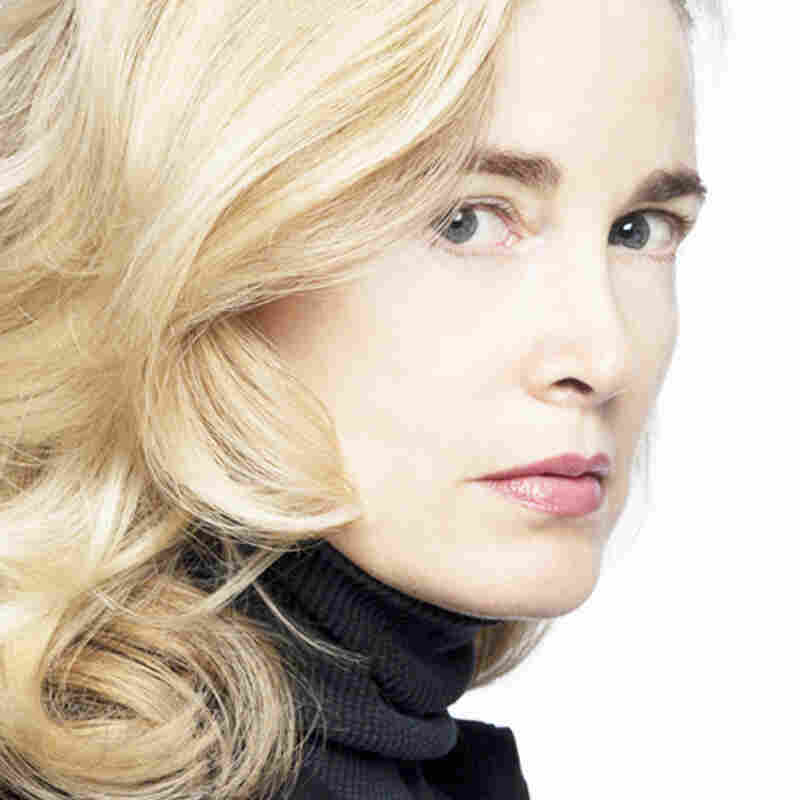 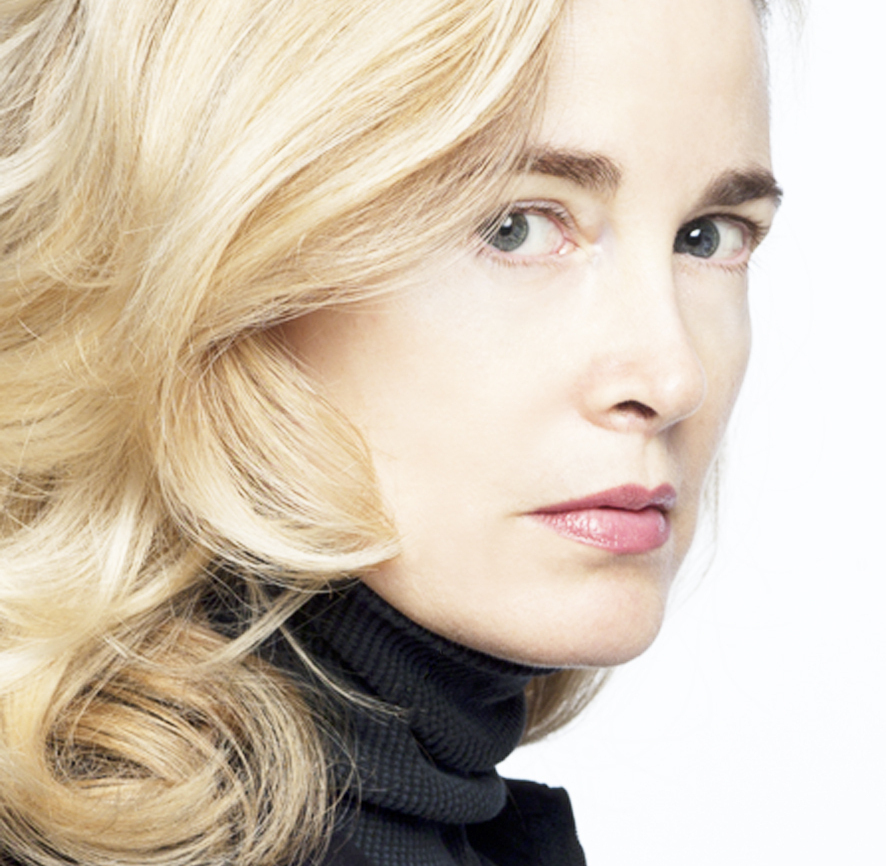 Lindsay McCrum is a fine art photographer. She lives in New York City and California.

While many of the women McCrum profiled became interested in guns because of the men in their lives, they developed their own relationship with firearms. Guns are a welcome part of their families' lives.

"What I learned ... is how important the activity of shooting and hunting is as a family activity," McCrum says. "I also realized that if you or I had grown up in a different region of the country, odds are we would have had our hunting tags by the time we were 12."

McCrum's book shows that hunting isn't the only reason women own guns in the U.S. As the project evolved, she began to photograph women in law enforcement. Then came women who owned guns for protection. One woman bought a gun after working as a 9-1-1 dispatcher.

Her images of women who own guns for self-defense tend to elicit a common response, she says: "What a sad commentary that is on our culture that a woman would feel the need to have a gun in order to feel safe and protect herself and her family."

Despite the controversy guns inevitably bring up, McCrum insists politics has nothing to do with her images — in fact, that was something that helped her build trust with her subjects.

"I would always make it very clear there was no political or ideological agenda attached to this body of work," she says.

McCrum, who has never owned a gun herself, says completing the book left her with a larger understanding of the role guns play in women's lives.

"There's a remarkable diversity of women," she says, "and there's an extraordinary range of reasons they own guns."